“When the Supreme Court fails the very precedent it created, it sets a terrifying precedent, not only for women’s rights but for the rights of us all.” 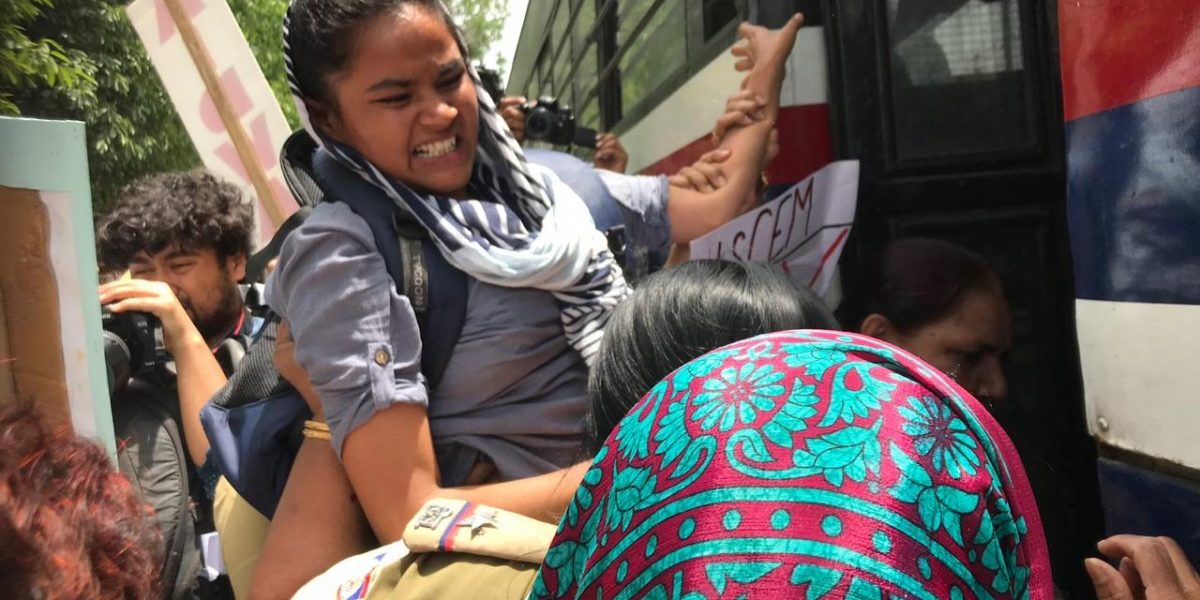 New Delhi: For the third day in a row, people protesting the clean chit given to Chief Justice of India Ranjan Gogoi have been forcibly detained by a huge deployment of police in Delhi.

Protests have been held in cities across the country, demanding that due process be followed, and that the case receive no special treatment just because the accused is the CJI. 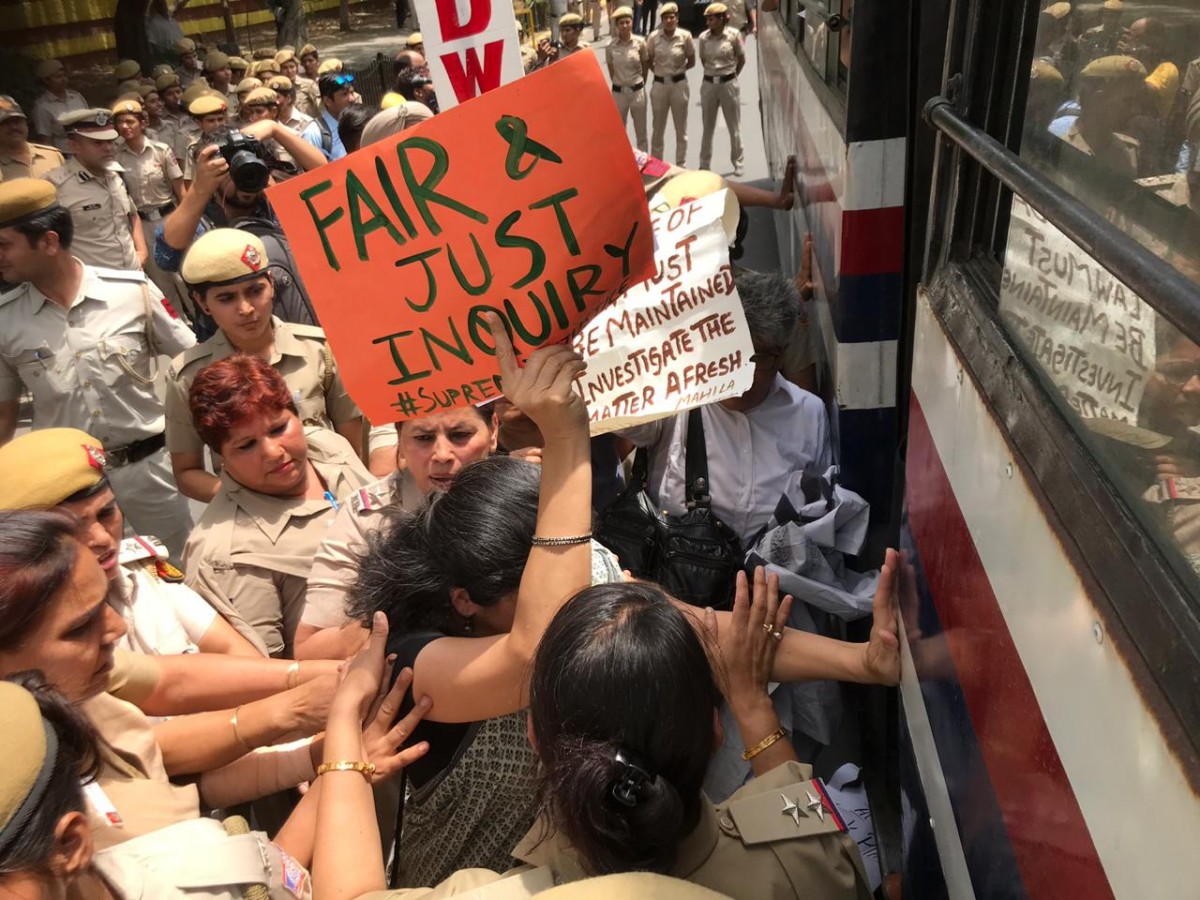 Day three’s protest began at Mandi House on Friday (May 10), with the intent of marching to the Supreme Court. Annie Raja, of the National Federation of Women (NFIW), says that she had requested permission in writing from the deputy commissioner of police, giving details of the strength of the march as well as the location and path it would take. While the letter was received, policemen informed the organisers verbally that they would not be allowed to demonstrate at the Supreme Court. They were informed that they could protest on the road, and would be stopped “at some point on Bhagwan Das road” with a barricade.

Also read: The High Barriers to Justice For Women

What transpired was starkly different from what was expected. A huge police deployment was waiting at Mandi House as protestors arrived, with water cannons ready. 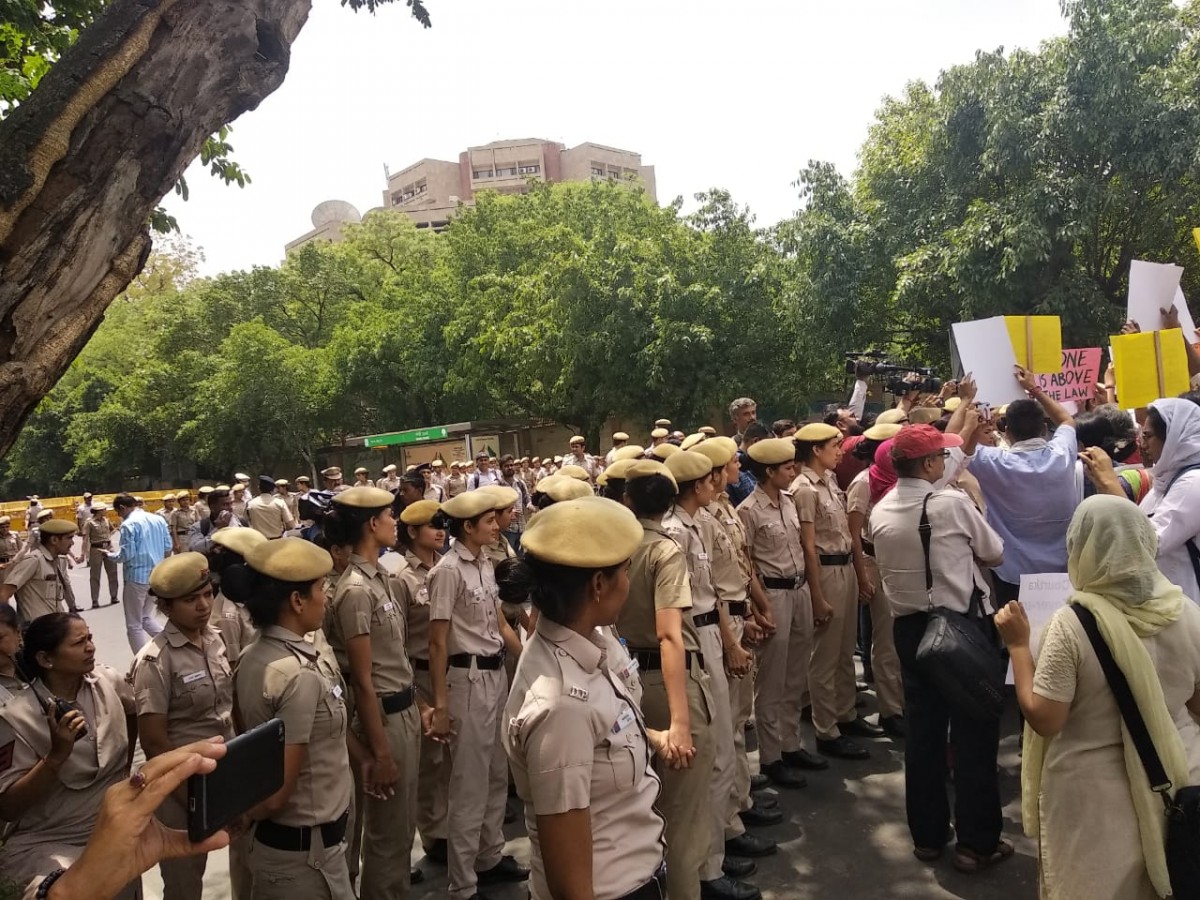 After about ten minutes, the protestors were surrounded by the police and told to disperse as Section 144 had been put into effect in the area. “They made a human chain and surrounded us and shoved and pushed people into buses,” says Amrita Johri, member of the National Campaign for People’s Right to Information.

Protestors say that the police were notably more violent than on the previous two occasions. The first day, protestors were detained outside the Supreme Court parking lot, and the next day, 17 women were picked up and detained from Connaught Place. Maimoona Mollah, Delhi president of the All India Democratic Women’s Association, was left with bruises and scratches from the police forcing her into the truck. “They said nahi, rehne dijiye and they just pushed me in the bus and I fell down on the stairs,” she says. 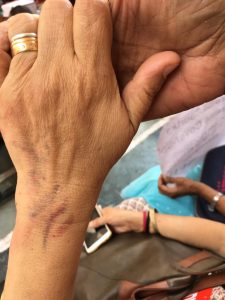 Johri says, “They started making announcements saying if you don’t stop now, not only will we detain you but we will file charges against you. We told them that yesterday we had discussed this with them; this was not a flash-mob or anything.”

“This is not just for one woman, we are protesting for every woman in this country,” said Ayesha from the Right To Food Campaign. “If in this day this kind of injustice can take place, the CJI can walk free like this, then the audacity of … all office bearers will continue without fear of checks or balances.”

“There’s already only a small number of women who work outside home,” Ayesha continued. “The ratio has been decreasing in the past few years. This is not an injustice against one woman, it’s an injustice against all the women of this country, and we cannot not let it stand.”

Protests have taken place across India’s major metropolises. In Bengaluru, 40 protesters were detained in a similar fashion. Protests are legal if protestors have intimated the police that the protest will be taking place (as the activists had done) but the Bengaluru police cited lack of permission when detaining protestors. Bindu Doddhatti from the Alternative Law Forum said, “We protested at the Bangalore high court for 20 minutes without any trouble. But when we reached the Mysore Bank Circle, a police cohort had been waiting and took us away in minutes. There were more police than protestors.”

On more than one occasion it was noted that, informally, even the police do not believe that the protest gatherings are unlawful.

In Ahmedabad, protesters were detained with the police saying that they had not taken due permissions, while also denying another group of activists permission to protest.

Citizens also demonstrated in Hyderabad and Mumbai, with another planned for Lucknow. 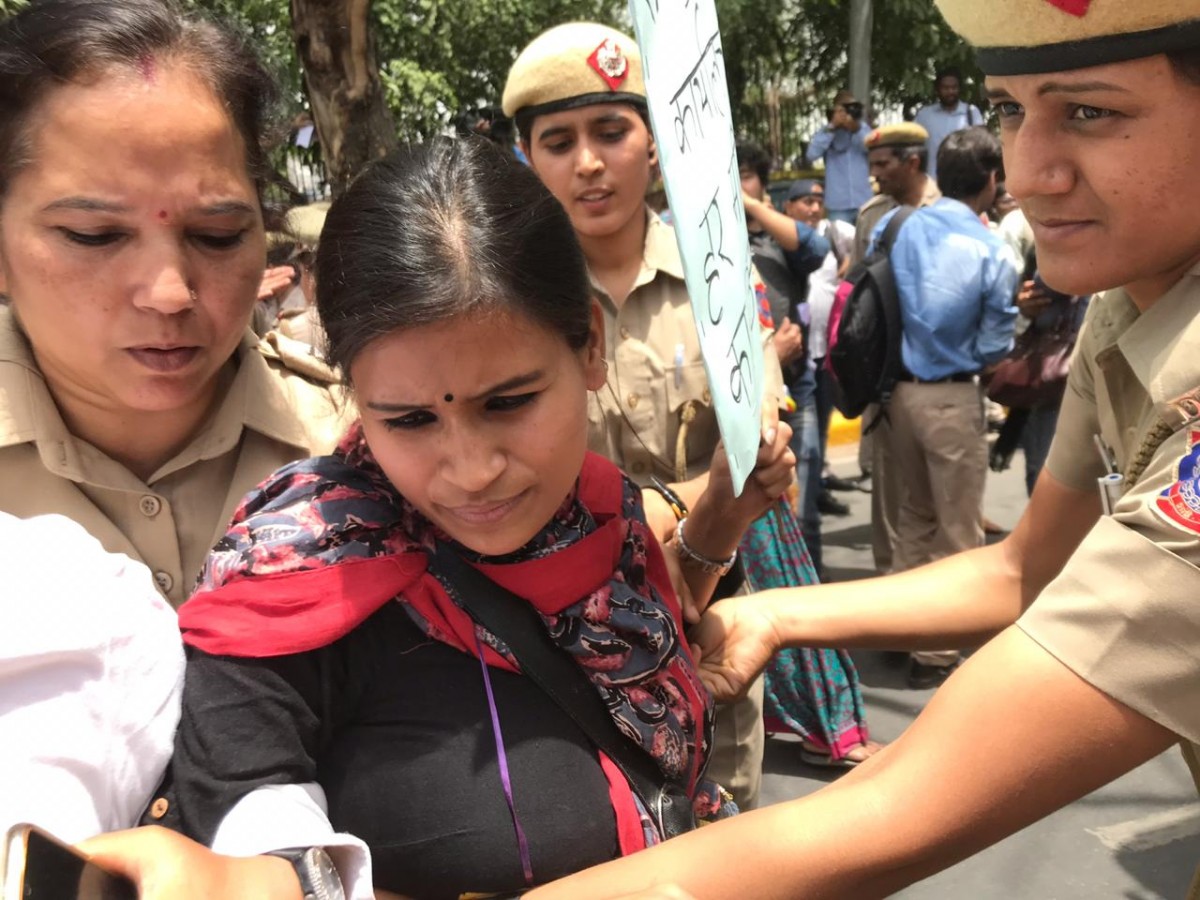 In Delhi, a #SupremeInjustice protestor is taken away by the police. Credit: Anjali Bhardwaj.

“The hope was that in a case like this there would be due process. Unfortunately form the beginning, the whole process has been vitiated,” Anjali Bhardwaj, founder of the Satark Nagrik Sangathan said. “The CJI has got a copy of the report [exonerating him], ironically, but the woman who has filed the complaint has not been given a copy. This has been a travesty of justice. There seems to be no system for holding a chief justice accountable.”

In a joint statement, a number of rights groups said, “When the Supreme Court fails the very precedent it created, it sets a terrifying precedent, not only for women’s rights but for the rights of us all.”