The programme has been able to make a positive impact in the lives of around 3,000 tribal women by equipping them with skills in sewing, soft-toy making, clay art, embroidery, among others.

Women working at Sakhi centre in Kushalgarh in Rajasthan. Photo: By arrangement.

Jaipur: When Deepa had to move to Kushalgarh, a small sub-divisional township in the southern part of Rajasthan, with her husband, she had little idea that it would alter her life substantially.

Deepa’s husband, Narendra Biswas, who worked as a compounder (without qualification) in West Bengal, had decided to move to Kushalgarh in response to a job offer. Enhanced wages and growth, he had it all at his new workplace. Biswas was leading a decent life until he was rendered jobless overnight as a consequence of the government’s crackdown on quackery.

Biswas was the sole breadwinner in the family and didn’t have any substantial savings. In order to support the family, Deepa, who had already joined a programme called Sakhi to learn sewing, opened up a tailoring shop with financial aid from Sakhi. 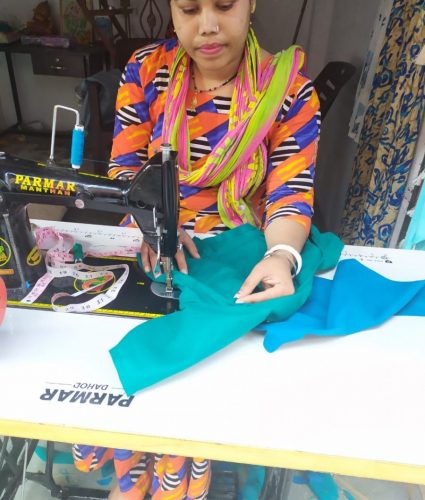 Deepa Biswas at her store in Kushalgarh, Rajasthan. Photo: By arrangement.

With her dedication and hard work, Deepa has been able to meet the customers’ demand in the village at an affordable price. On her insistence, Biswas, too, joined her and has been assisting her to expand the business.

Just like Deepa, 20-year-old Maya, who used to work as a domestic worker, has also joined Sakhi to hone her sewing skills.

Maya had to drop out of school and take up a job when her father died of a liver infection. She was not happy working as a domestic worker and when counselled to join Sakhi, she readily took admission and picked up the skill in a month. She now designs trendy clothes and sells them in Kushalgarh through Sakhi.

“I and my brother are the only earning members of the family. I earn about Rs 8,000 per month. This is more than what I used to get after cooking and cleaning utensils in three households,” Maya told The Wire.

Deepa and Maya are among 3,000 women who have been so far benefited from the Sakhi programme run by Pratidhvani Sansthan in Kushalgarh. The programme aims to empower women in this remote area of the desert state by equipping them with specific skills to create home-based livelihood opportunities.

It provides them with hands-on training in making soft toys, clay art, sewing, embroidery and mehandi over a duration of one year.

Sakhi was founded by social researcher Nidhi Seth in 2016. Seth had done her PhD on evaluating the role and position of gram sabhas in the panchayat system, particularly in Rajasthan’s Kushalgarh. Sakhi founder Nidhi Seth with women during a discussion. Photo: By arrangement.

Her findings brought to the fore a disturbing picture of this tribal area. In absence of livelihood opportunities locally, an overwhelming number of tribals had been migrating to nearby urban areas.

It was discovered that the rural-urban migration was predominantly male in Kushalgarh. The ratio of male-female migration in Rajasthan is 79:21, implying that the majority of the women are left behind when men migrate in search of livelihood. This was seen to have an adverse impact on the life of tribal women who had to manage home, children, and other responsibilities with a limited amounts that their husbands would send home.

Seth had also assisted the government agencies under the Mahatma Gandhi National Rural Employment Guarantee Act (MGNREGA). She says that while working on the employment guarantee scheme, it occurred to her that initiating a similar livelihood generating programme would solve the problems of the tribal women.

To start Sakhi, Seth had also applied to the Rajasthan government under its skill development initiatives in the year 2014. However, it did not work.

“The government had agreed to help the women with only a little monetary aid, that too, if we agreed to advertise them by using their photos at our centre and every other by-product. We disagreed and decided to go on our own,” Seth told The Wire.

Having a thorough knowledge of the region, Seth has been able to work comfortably and effectively in Kushalgarh. “No resident of Kushalgarh would pass by Nidhi without greeting her. She is a livewire there,” said Sanjay Lodha, an advisor at Sakhi.

During the COVID-19 lockdown, when the male migrants returned homes in absence of work, women associated with Sakhi were able to run their families. Sakhi, in fact, pushed its women members to make masks during the lockdown.

“The women were not able to come to our centre due to the lockdown. So, we delivered the sewing machines at their homes so that they could continue the work,” said Seth.

She says that the Sakhi members made over 50,000 masks during the lockdown and sold them to various agencies including the State Bank of India and ICICI bank branches in the area.

“All we can say is that our women’s income was not affected due to COVID-19,” added Seth.

Sakhi is continually enabling the women in Kushalgarh to establish their own identity, and at the same time, bringing down distress migration in the region.