Recent cases show how political elites and administrators choose to help perpetrators while doing everything to shun efforts to secure justice for victims. 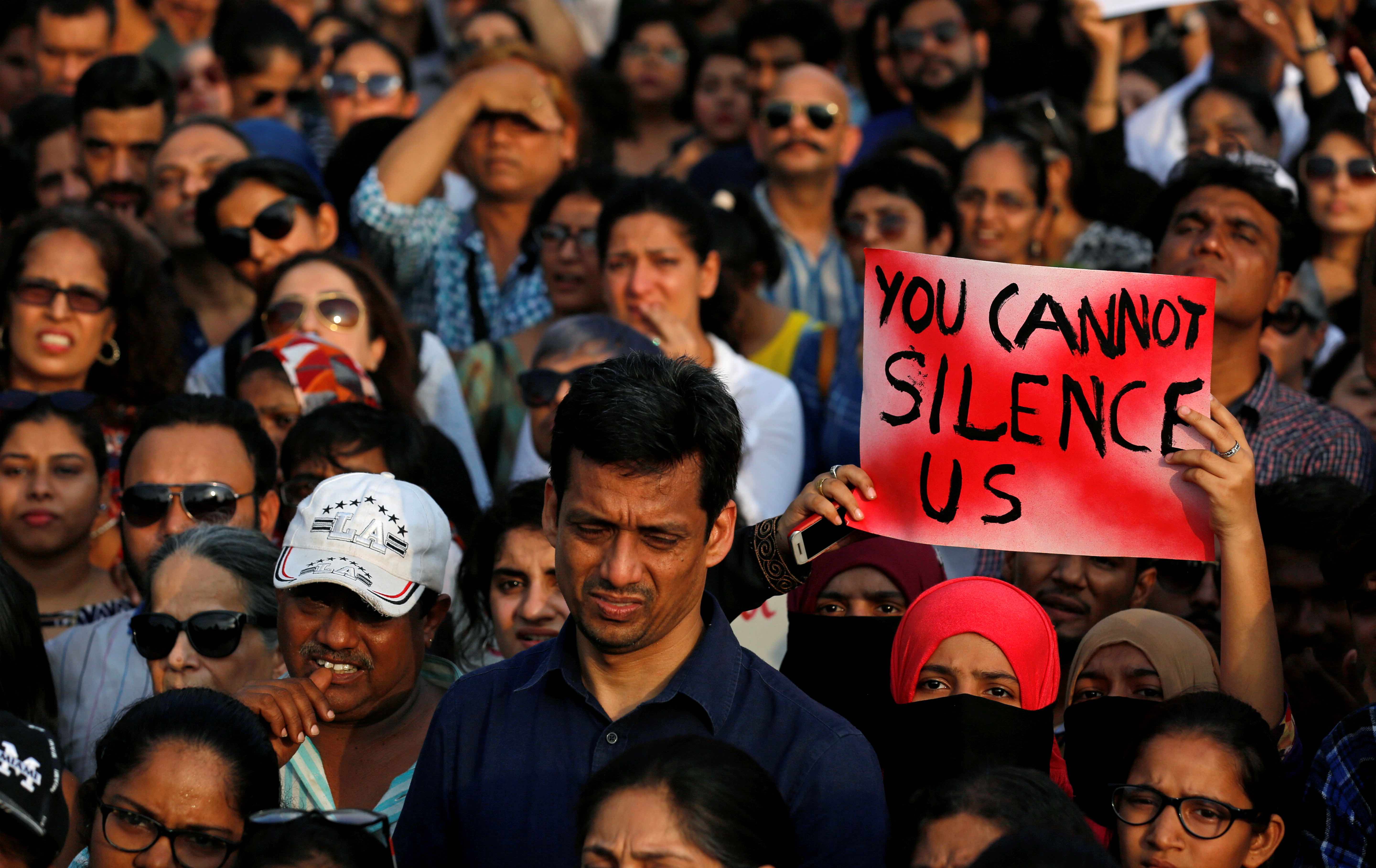 A woman holds a placard as she participates in a protest against the rape of an eight-year-old girl in Kathua near Jammu, and a teenager in Unnao, Uttar Pradesh, in Mumbai, India, April 15, 2018. Photo: Reuters/Danish Siddiqui

The two sickening recent crimes – the gangrape and murder of an eight-year-old Muslim girl in Kathua and the rape and systematic exploitation of an 18-year-old woman (and her family) in Unnao – have laid to rest the political rhetoric of ‘civilisational superiority’. They reflect a deep decay in our public institutions – political parties, the police, lawyers and the bureaucracy.

In the Kathua case, a violent crime against a child was apathetically pursued by the police. A group of influential lawyers tried to prevent the filing of the chargesheet, while Hindu political interest groups came out in support of the accused. The case in Unnao reflects the well-known, unfortunate story of those wielding muscle power often using it to grant impunity to their own ministers, even when they are accused of sordid crimes.

There is a common thread seen in both these cases – political elites and administrators choose to help perpetrators while doing everything to shun efforts to secure justice for the victims. The degree of collusion seen in protecting accused rapists and others committing horrendous crimes against women is nauseating, threatening our faith in India’s democratic ideals and its institutions.

On rising crimes against women

If we just take the city-wise percentage share of (reported) crimes against women to the total share, cities like Bengaluru and Pune are witnessing a higher incidence of crimes against women (in recent years), with rapid urbanisation and inadequate local governance measures to ensure women’s safety.

In recent years, the majority of cases categorised as crimes against women were reported under ‘cruelty by husband or his relatives’ (32.6%), followed by ‘assault on woman with intent to outrage her modesty’ (25%), ‘kidnapping and abduction of woman’ (19%) and ‘rape’ (11.5%). The highest number of rapes have been reported from the states of Madhya Pradesh (4,882), Uttar Pradesh (4,816) and Maharashtra (4,189).

The number of cases reported during 2016 was higher in most cases than previous years. Cases pending from previous year’s investigations were also very common in cities like Delhi, Patna and Bengaluru. The situation worsens when one carefully studies the numbers in semi-urban and rural areas (which includes more than 70% of the nation’s population).

The paucity of data available on crimes against women and rate of disposal of police cases in rural, semi-urban areas makes it difficult for us to know the actual degree to which such crimes have increased over the last few years. Further, most of the statistical projections highlighted above reflect gross-underreporting of crimes against women (including cases of workplace harassment, domestic violence, etc.).

The problem of a lack of empirics in understanding the degree of violence in our society remains further compounded by the institutional inertia seen in the response to rising violence. Political groups and the local justice system offer little confidence to women (and their families) to report cases and actually seek justice.

Addressing any crime over the long term requires persistent social intervention from public institutions and agencies of the state (and beyond) at three levels – incentive, opportunity and consequences. A lot is written about initiating social awareness and legal remedies (via severer punishments etc.) for necessitating changes in social attitude to address gendered perceptions. Similarly, a multitude of conferences and workshops are organised to deliberate and explore alternatives for improving public infrastructure systems to reduce the opportunity aspect of crimes against women.

However, the third aspect, of the consequences of a crime on the perpetrator and on the victim, requires greater attention. By consequences, one can refer to the potential consequences (of committing any crime) for perpetrators, and the very significant consequences for victims, who face numerous cases of harassment and molestation (before or after reporting a case), therefore often choosing to stay away from the legal system.

Delay in judicial decision-making and the refusal of the police to register or dispose of reported cases make the consequences worse for the victims. The role of the civil society, and particularly the media, becomes vital in ensuring due process works (through periodic reporting of cases, for instance) while encouraging greater public awareness in protecting the agency of women’s freedom.

The very survival of our faith in India’s democracy rests on facilitating a legal and public institutional system that actively encourages and supports the agency of women and their freedom. To ensure this, it is morally imperative for the police to act professionally and follow due process on matters of all crimes against women; and for lawyers and judges to turn up in court and do their jobs well.