In her complaint, the victim has also alleged that when she complained to the Hindutva activist about the crime, she said, “Koi baat nahin, 100 gaiyon ka daan ho gaya” (Don't worry, this is the equivalent of donating 100 cows). 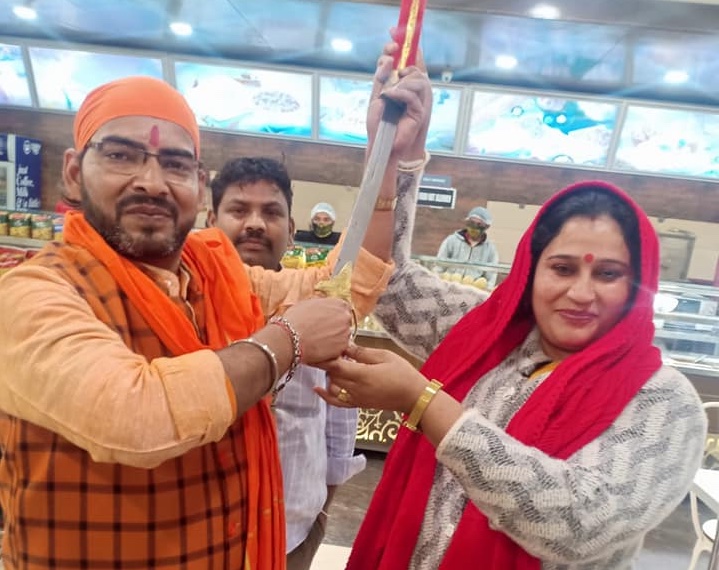 New Delhi: A young woman has accused an office-holder of the Rashtriya Yuva Hindu Vahini of helping her son and another relative rape her at her residence in the Pallavpuram area of Meerut. The victim has also alleged that when she told the Hindutva leader about the crime, she retorted by saying: “Koi baat nahin, 100 gaiyon ka daan ho gaya” (Don’t worry, this is the equivalent of donating 100 cows).

Though the incident took place on July 15, the victim was only able to get a First Information Report registered  on July 28. She said the accused had threatened her with death. They also told her they would make public a video recording they had made of her rape.

The Pallavpuram police station duty officer told The Wire on Friday night that the victim was medically examined earlier in the day. However, no arrests have been made in the case so far, he said.

The FIR in the case (No. 0304) was lodged by the victim at Pallavpuram police station in Meerut district at around 6 p.m. on July 28.

In her complaint, the victim, 24, who is a resident of Bareilly in Uttar Pradesh, named Meenakshi Chauhan, wife of Narendra Chauhan, a resident of Gram Dulheda Chauhan in Pallavpuram, as an accused along with her son, Aniket Chauhan, and another relative, Ajay Chauhan.

The victim is Muslim but her complaint does not state that her religion was a factor in the crime. Indications are that she may also be a member of the Rashtriya Yuva Hindu Vahini, and was thus known to Chauhan and her family.

Apart from rape, the police have added others sections of the Indian Penal Code against the three accused.

The victim says she was served a cold drink that was spiked and the two men then raped her. She said that Laxmi, Aniket and Ajay Chauhan also beat her up, threatened to kill her,  and threatened to make a video they had shot public to defame her.

In her complaint, marked to the senior superintendent of police, Meerut division, the victim said she had become acquainted with Meenakshi, who resided near Shobhit University, and used to frequently visit her home.

She told the police that Meenakshi used to identify herself as the organisational secretary of the women’s wing of the Rashtriya Yuva Hindu Vahini. Though the victim doubted whether she actually held such a post, The Wire can confirm that Meenakshi Chauhan is indeed the ‘rashtriya sagathan mantri’ of the organisation. At an event held in Meerut on February 5, 2021,, the Rashtriya Yuva Hindu Vahini’s head, Anurag Goswami, acknowledged her role.

Goswami’s outfit is not the same as the Hindu Yuva Vahini, which Uttar Pradesh chief minister Adityanath headed. Last year, in fact, Goswami was detained by the UP police under the National Security Act when he used abusive language against senior officers for filing against him for holding a public meeting in defiance of Covid guidelines. He was released in February this year and promptly declared his support for “Yogi and Modi”.

Image posted by Meenakshi Chauhan on her Facebook page

The victim said the on July 15, she was present at Meenakshi’s residence when Ajay and Aniket served her a cold drink which was laced with some substance. After that, the victim claimed that she lost consciousness and then both men sexually assaulted her.

She said that when she regained consciousness, she found Aniket still engaged in the act. When she protested, she said, Ajay took out a “tamancha” (fire-arm) and threatened to kill her

`SHO a close associate of Meenakshi’

In the FIR, the victim also stated that the station house officer of Pallavpuram was very closely associated with Meenakshi.

She said that after the rape, she was beaten up and then thrown out of Meenakshi’s house on the night of July 16. Traumatised and deeply scared, the victim did not know what to do.

She complained to the police that Meenakshi also threatened that if she took any action she would make a video recording of her rape viral. “Mooh dikhanay laik nahin rakhoongi. Atma-hatya karnay ko majboor kar doongi” (You will not be able to show you face to anyone. I will compel you to take your own like), she threatened her.

However, on mustering courage to confront the well-connected accused, the victim lodged the FIR with the police. She also charged in the FIR that it was on a deliberate instruction from Meenakshi that Aniket and Ajay assaulted her after serving her a drink laced with sedatives.

The victim also said that Meenakshi Chauhan had earlier duped a woman by the name of Vandana Saini  of Rs 20,000 in the name of getting a report registered and that she had the recording of the incident with her. Similarly, the victim said, Meenakshi used to get false cases registered against people and had got one such complaint lodged against Kapil Malik, son of Shailendra Malik, at Modipuram police station in Ghaziabad on the complaint of a woman in April this year. This is how she would extort money from people, the victim said in the FIR.

Goswami, who heads the organisation to which Meenakshi Chauhan. belongs, wants India to be declared a ‘Hindu state’ and says that the proposed UP law to disincentivise families from having more than one child should apply only to Muslims and that Hindus should be allowed to have three children each.

On his Facebook page, Goswami says he is inspired by defence minister Rajnath Singh and has posted photographs of his meetings with the senior BJP leader and former UP chief minister on multiple occasions.