Shome Basu documents the lives of some of the women at India's largest brothel in Kolkata’s Sonagachi. 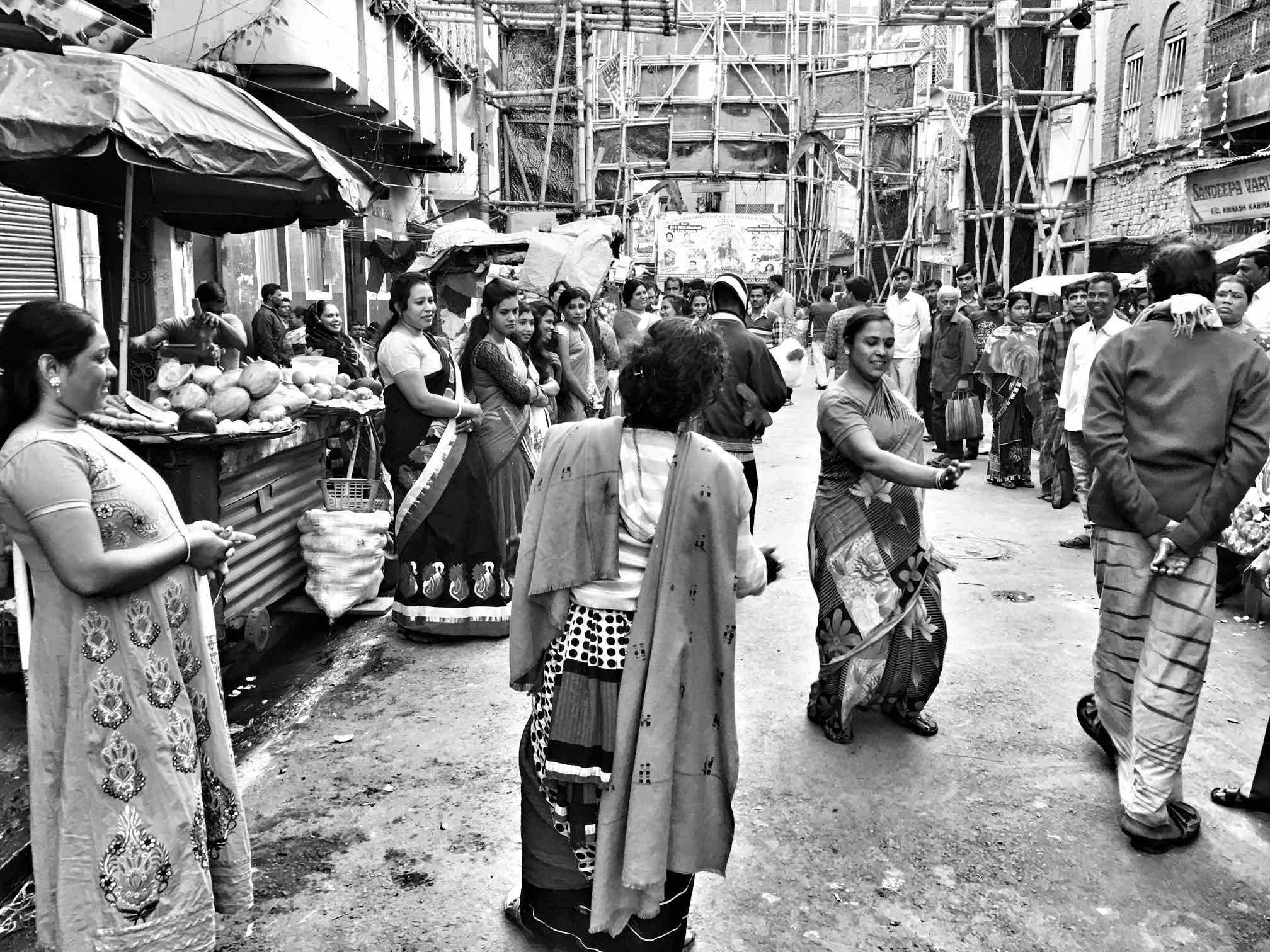 An expressionless face padded with cheap compact powder and glossy lipstick, and with a sparkling ghagra choli wrapped around her threadbare body, she stood waiting at the country’s oldest red-light district of Sonagachi in north Kolkata. Established by the British during the heydays of colonial rule, the Bengali babus selected this particular area for housing brothels due to its proximity to the Hooghly river. Eventually, the area became one of Asia’s largest brothels.

The name Sonagachi came from a Sufi saint who lived in Chitpore. He was called Sona Ghazi.

About 10,000 sex workers operate from the filthy rooms, earning anywhere between Rs 200 and Rs 20,000 a night. Out of this paltry income, they are compelled to pay rent of Rs 8,000. The dark staircases with dwindling alleys that are filled with clothes and lingerie hanging in rows from rooms make for a depressing sight. 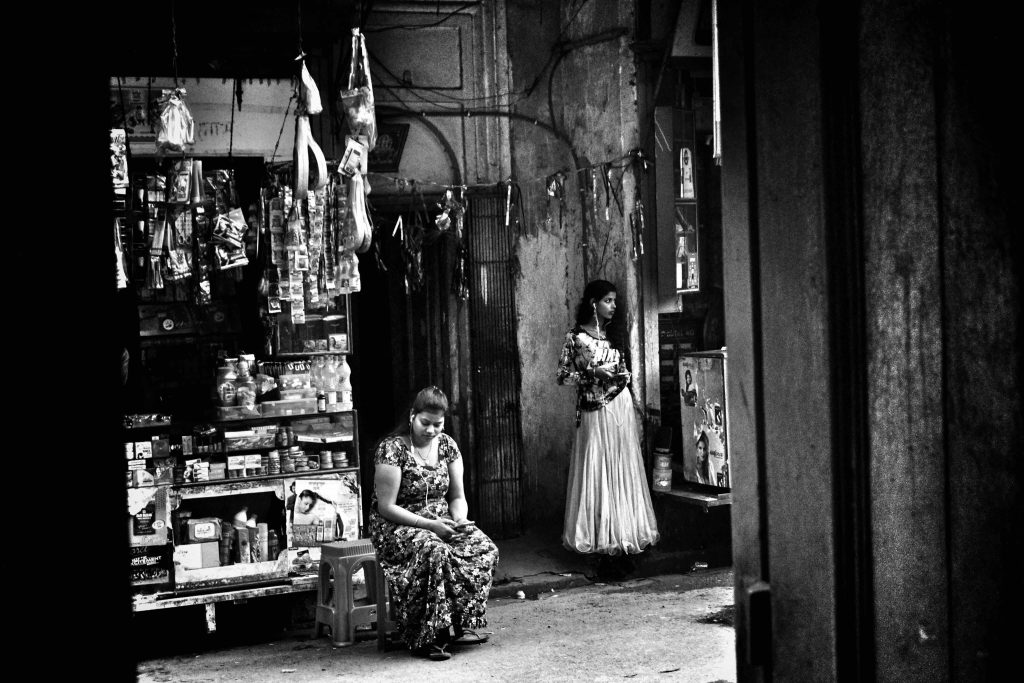 The usual scenes in the evening at Sonagachi. 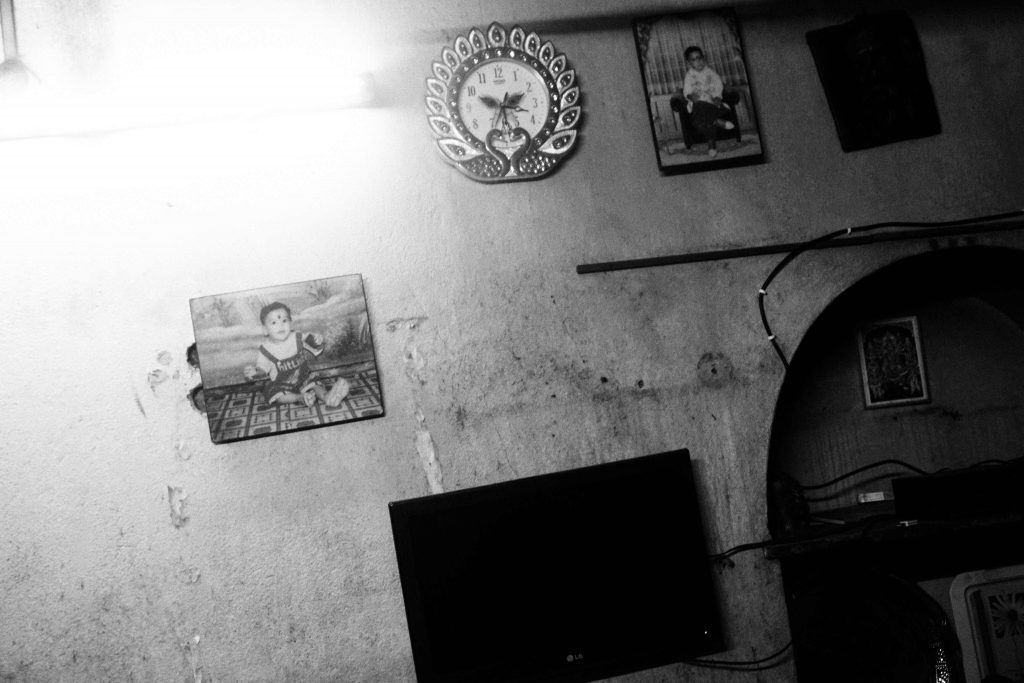 Inside the walls of a brothel where a sex worker hangs pictures of her son.

While walking through the alleys, one sees girls and women peeping out their windows and doors. The lingering smell of their perfumes makes one dizzy, even as the odour from the drains outside their rooms makes one squeamish. But such is their world.

The average size of their bedrooms, which are the cynosure of their business, is six-by-six, painted pink and green with images of Bollywood and Bengali actors adorning the walls.

At some corners, deities stare, even when they were engaged with their clients. Bottles of soda and liquor glasses take up some more place, while the bed covers the largest area in those cramped rooms.

Everybody here has a story to share. Although most of them are camera shy, they are ready to share how they were trapped or chose to be in this trade. “Men come to us, from politicians, policemen, businessmen and others. All spend nights with us and wake up abusing us as ‘whore’. If so, then what are those men?” questions one sex worker. 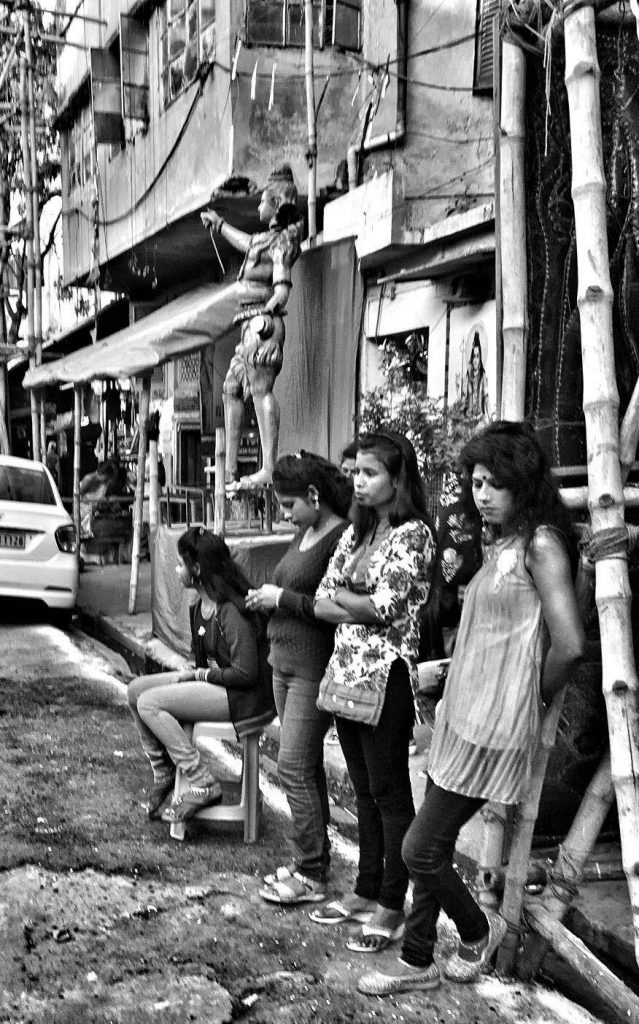 A common scene at the alleys of Sonagachi. 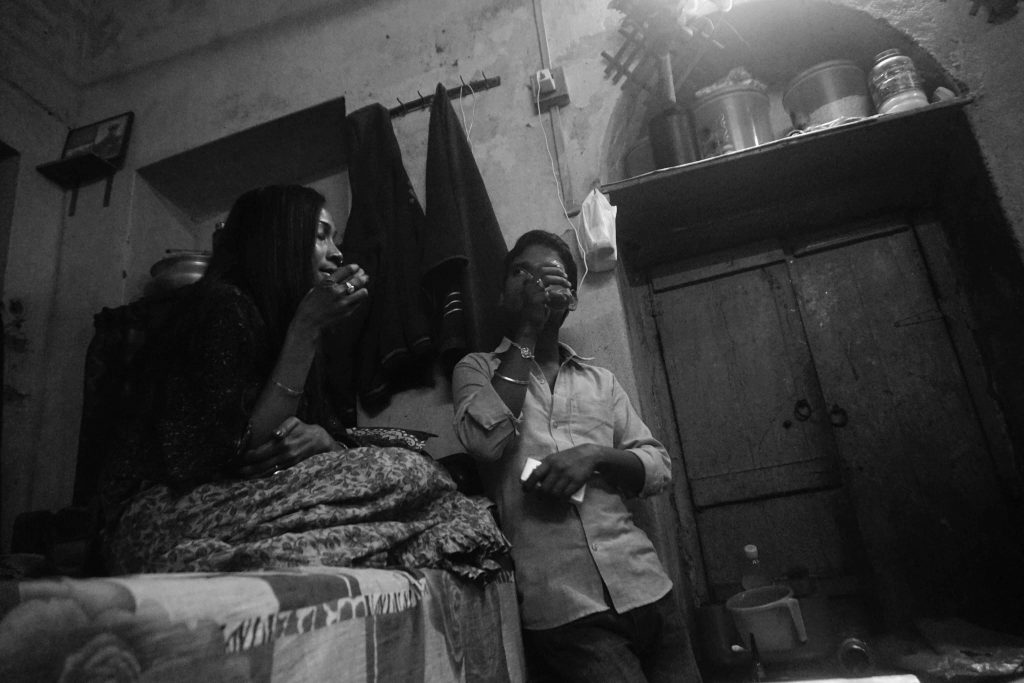 A sex worker spending leisure time with a close friend.

Keya, a sex worker from Sonagachi, asks me what I do. When I answer that I am a journalist, she smirks and says, “My profession is prostitution.” Her story involves getting involved in this trade by accident. She lived a good life in the western suburbs of Kolkata. While studying in school, she fell in love with a boy who happened to be a labourer at a jute mill.

Keya belonged to a middle-class, white-collared family. She still remembers reading the English daily The Telegraph regularly. But her relationship was not taken seriously by her family and they asked her to leave the boy. Soon, things took a turn for the worse.

The couple eloped. She gave birth first to a girl and then a boy. When her husband lost his job, the deteriorating financial conditions made life complicated. Regular alcoholism followed by physical abuse became a regular affair.

One day, her husband hit her head, leaving her bleeding. Somehow she escaped, but could only take her new-born boy along, since she knew she could not alone care for two children. 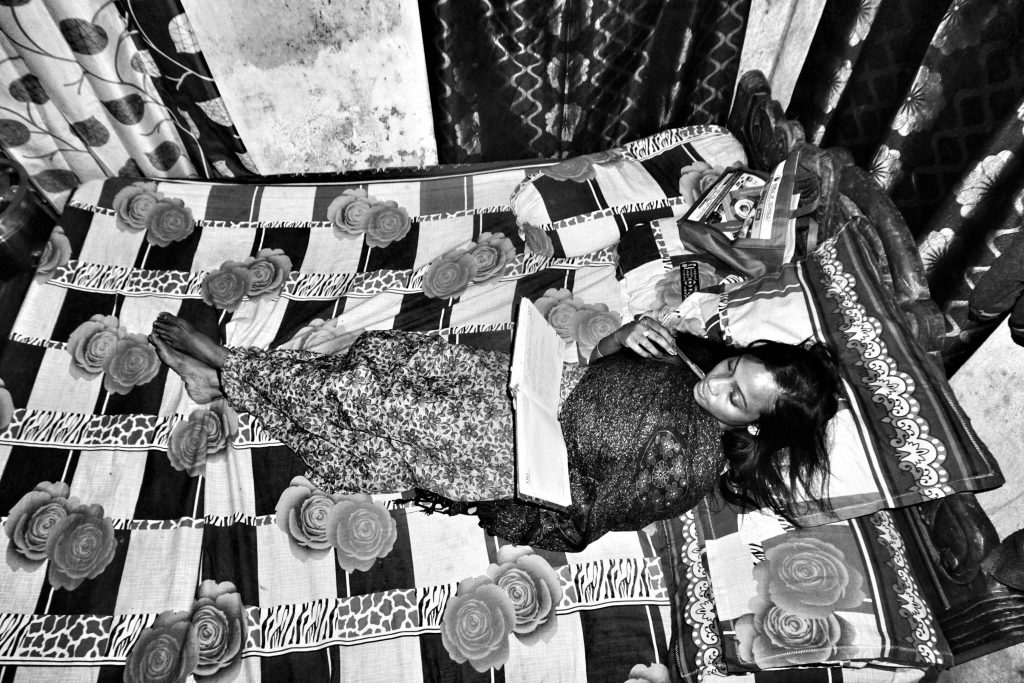 Keya, a sex woker, takes a break to write poetry.

While she waited at the station, she met a lady who her offered help. However, she was tricked into being sold at a brothel in Sonagachi. After a month of sobbing and cursing herself, she was not left with any other option but to join the long queue of girls waiting for customers on the street. During the fourth month, she tried to escape, but she was caught at the brothel door and was raped and beaten, and her infant was taken from her.

The people of that lane slowly became her new family. Later, she attempted to reach out to her estranged husband, and upon finding out that he had re-married, she broke down and revealed her circumstances. Her former husband, in turn, began to publicly shame her.

After years of struggle, Keya has now learnt how to cope with the situational hazards. Her son, now 13, studies at the Ramakrishna Mission school, an outfit run by a Hindu missionary. She says she owes this to Apne Aap, a NGO that is working towards ending hereditary prostitution. “These women are good individuals, just that they have to run their children without any family help, which has driven them to such a pathetic state. Their children are good in studies and all are looking for greener pastures the moment they complete their education,” said Sahana Dasgupta of Apne Aap.

In these brothels, rape is a common occurrence. Other crimes too are common in these gallis, which keeps the Kolkata police on its toes. 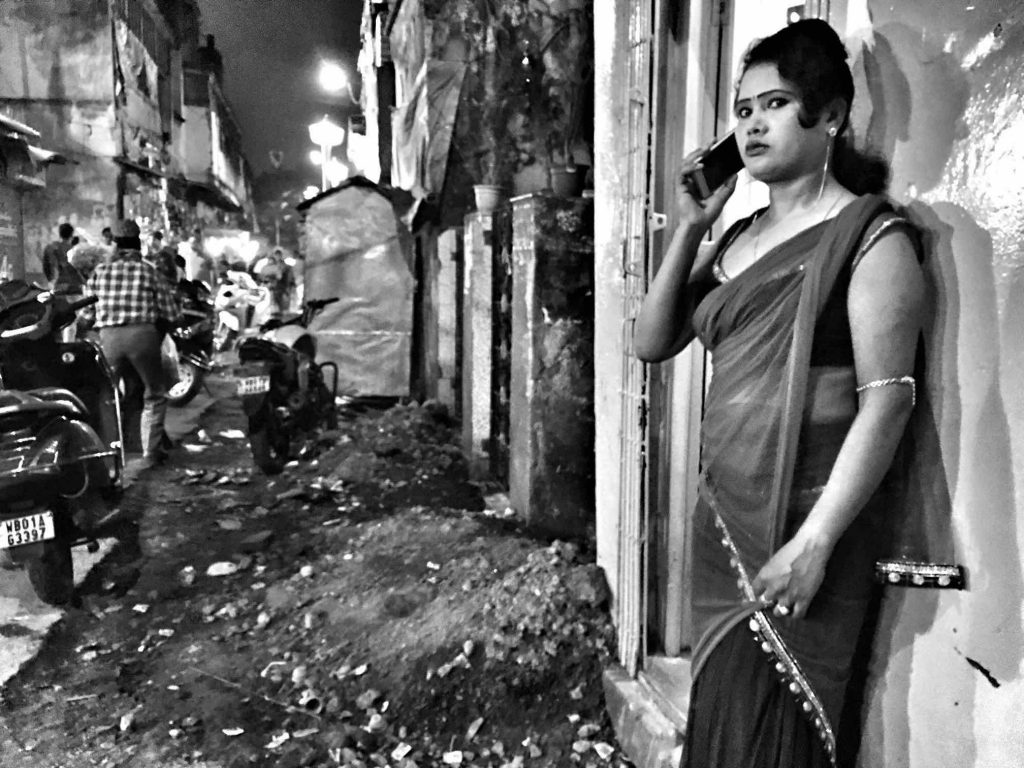 A girl waits along the by lanes of Sonagachi for clients.

Mamta Das is in her 20s. She has rented a small room in one of the narrow lanes in the area. Stench from the adjoining drain fills her tiny room, whose pink walls are covered with movie posters. Here, she lives with her brother and niece. She came into the profession by her own choice and she has made peace with it, since it allows her to take care of her poor family.

The biggest hurdle nowadays is of the education of the children of sex workers at the brothels. 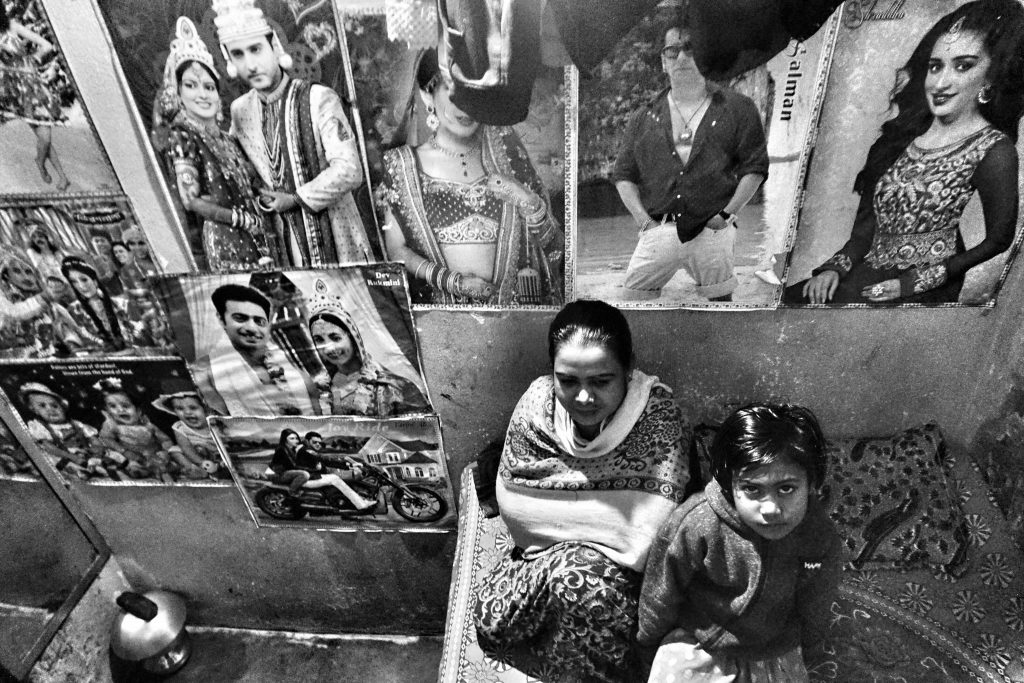 Mamata Das along with her niece at her quarters. 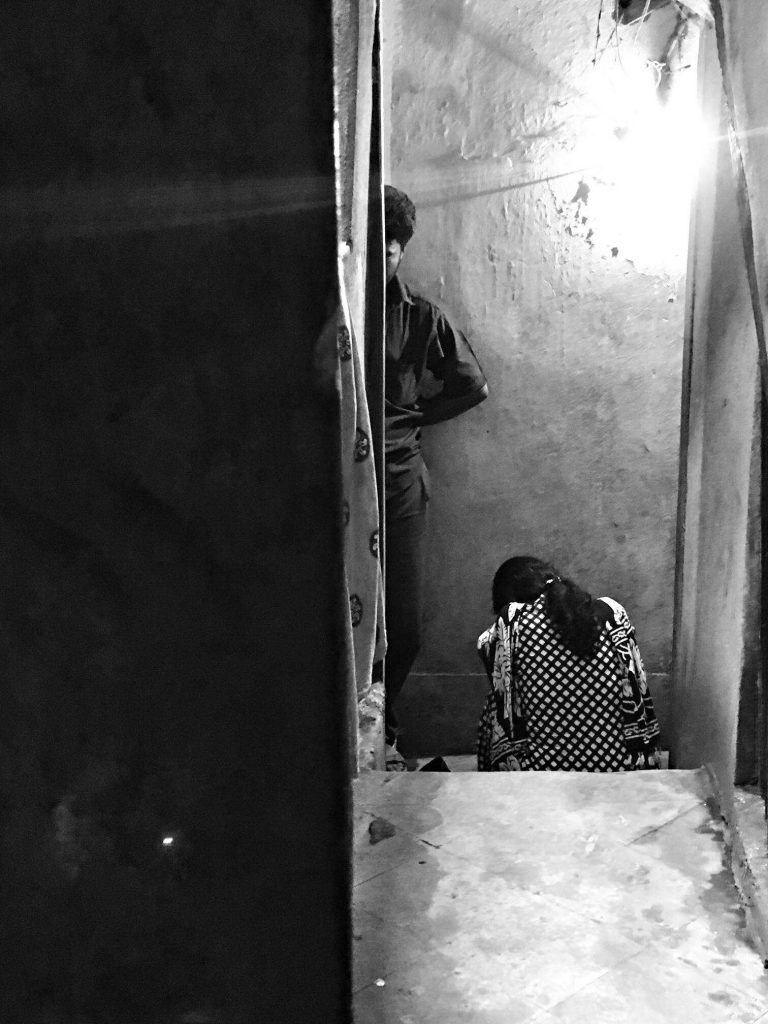 A sex worker with a client

Mala Das, a lady in her 60s, is completely against girls entering sex work. Some 40 years ago when she was working these lanes at Rs 6/man, mostly sailors and mill workers thronged them. She abhors the profession and says that sex workers are some of the most exploited people on the planet. But her son has married one. “Since no one would accept us outside this mohalla, we have to choose someone from our borough,” she laments.

As dusk falls, the place turns to an open-air disco with multiple speakers blaring different Bollywood songs. Although prostitution is illegal in West Bengal, the sex workers work in this area of north Kolkata and cater to all kinds of people from politicians to policemen. Raids are conducted every once in a while resulting in arrests and detentions.

The darker the sky gets, the more human traffic increases. The alleys get darker, and the sex trade reaches its peak.