'Patriotic Trolling to Astro-Turfing': Lessons From Maria Ressa on Dealing With Online Hate

The award-winning journalist's recent talk also holds the key to the unceasing hate received by the organisers of the Aurat March in Pakistan. 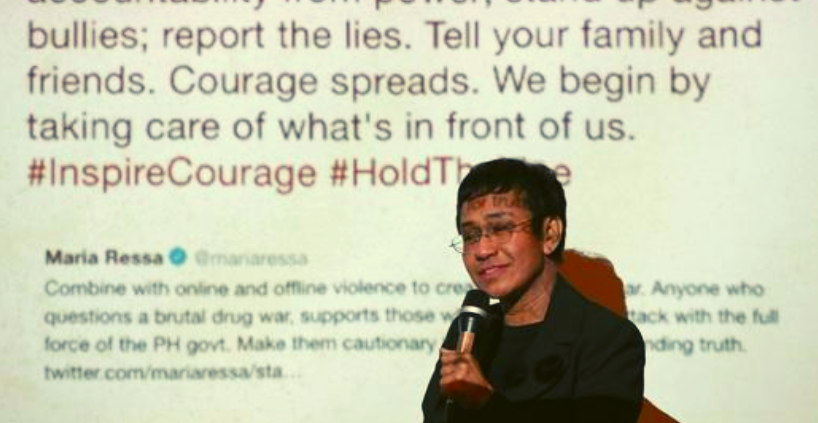 In her 34 years of reporting, Maria Ressa has “changed nothing” about how she works. What has changed is the unprecedented rise in the targeted abuse she faces. Speaking at Harvard University recently at a session organised by the Nieman Foundation for Journalism, she unpacks a pattern that is visible all the way from her native Philippines to the United States.

There is this “new weapon against journalists”, says the award-winning journalist who was with CNN for 20 years as bureau chief in Manila, then Jakarta, and as lead investigative reporter on terrorism in Southeast Asia. She returned to the Philippines in 2012 to help found the media start-up Rappler.com.

What Ressa terms as the global phenomenon of “patriotic trolling” will sound familiar to any journalist who pushes after the facts just about anywhere in the world, including Pakistan and other South Asian countries.

The particular targeting of women could in fact be termed “patriarchal trolling”.

The strategy, says Ressa, is to “pound them”. It starts with a bottom-up attack: “astro-turfing”, fake grass that looks real. The fertiliser is social media. There is a “scorched earth policy” – silence the opponents, leave them incapable of action. 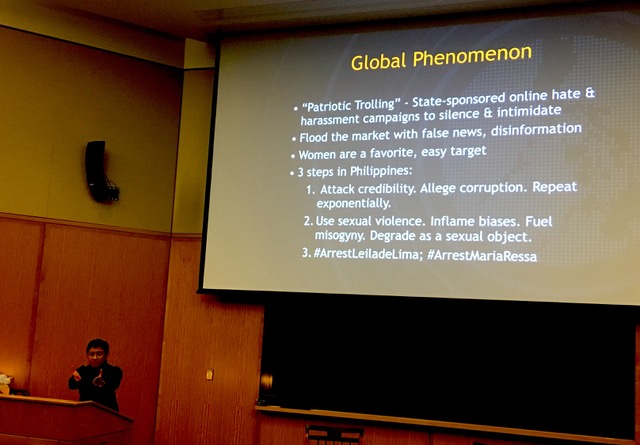 Maria Ressa unpacks the new weapon against journalists and women: A global phenomenon

Extensive data examination reveals that “26 fake accounts can influence three million others… It’s a full-time job”. One of the slides Ressa presents shows the multiple times that the same message has been copy-pasted as a comment — up to 40-80 times a day.

Another slide shows how the networks spread as more and more people repeat the falsehoods. In the age of social media, “a lie told a million times becomes a fact”.

Also read: Do Women Journalists Have it Harder in India?

This info-ecosystem creates a bandwagon. Everyone believes in the “corruption” of X politician or the “foreign agenda” of Y journalist – and “so you must also”. The campaign against Rappler led to it being banned from the palace two years ago, and subsequently even from any private function that the president or his allies were attending.

To understand the phenomenon, Rappler uses natural language processing (NLP), a branch of artificial intelligence that deals with the interaction between computers and humans. Ressa shares the findings in a slide showing the intensity of online attacks correlating to the political timeline. Another slide features the three social media accounts that in a targeted way influenced thousands of others. 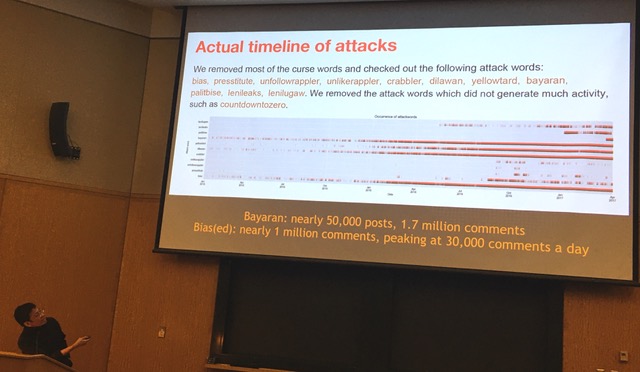 Pounding: A timeline of attacks on Ressa/Rappler

The one-sidedness of the fight is evident in a slide showing how heavily the social media activity is weighted towards the pro-Duterte camp. The only time it evened out was the first time Ressa was arrested, in February 2019.

That’s when ‘normal’ people who were “moved enough to not look away” began to share information about the issue from various news sources. Today too, “people who care about facts, about democracy, can’t afford to look away”.

There was another time that both sides evened out, Ressa corrects herself: When U2 performed in the Philippines and Bono criticised the ongoing violation of human rights in the country. She modestly does not mention that she was among the Filipina women honoured at the concert. In fact, Bono mentioned her more than once: “Maria Ressa is an incredible woman but the extraordinary thing is even Maria Ressa will say it’s not about individuals, it’s about collective action”.

Another strategy to silence dissent is to degrade women as sexual objects. The end goal is to intimidate and wear down the target. At one point, Ressa received 90 hate messages an hour. Hard work and consistency: Despite setbacks, Rappler’s finances have risen, with diversified sources.

Social media campaigns become a foreshadowing of action against journalists. Ressa has experienced this first-hand, having been arrested twice. Her journalism demanding accountability from power didn’t go down too well with the tough-talking Rodrigo Duterte, mayor of Davao City for two decades, known as “the Punisher” because of the extrajudicial killings of over 1,000 suspected criminals that took place under his watch. He has denied having allowed the killings but has also at times bragged about them.

Duterte swept into power following presidential elections in 2016. His presidential campaign was riddled with obscenities, including boasts about his affairs and use of Viagra, and jokes about raping a missionary.

The hashtag #arrestMariaRessa began circulating a month later. It gained traction around the mid-term elections in 2019. Ressa was arrested shortly afterwards. “I could have been released on bail but they kept me overnight just to show their power”.

In any case, “you don’t need to go to prison to be imprisoned”. There is a culture of fear that prevents journalists from doing their jobs. This is true not just in the Philippines.

As many as 88% of Pakistani journalists who participated in a survey on self-censorship said they were most likely to hold back information related to religious and security matters in their reporting and personal conversations.

Another target in the Philippines is opposition senator, human rights activist and lawyer Leila de Lima, critical of Duterte’s drug war. Two weeks after the hashtag #arrestleiladelima appeared, she was arrested, 24 February 2017. She continues to remain in detention, “pronounced guilty” even without a trial.

De Lima holds she is a victim of political persecution with her right to due process violated, and the personal attacks against her distorting public opinion.

The widespread perception that de Lima is corrupt, points out Ressa, is not proof of corruption. “She has never been allowed to present her case”.

But public opinion, as De Lima told Al Jazeera, makes it easier for the Philippines government to “manipulate” the legal system and justify her detention. (Sound familiar, Pakistan?)

There is also a view that tech enabled the wave of misogynistic strongmen elected in different countries around the world over the past years.

Duterte, as De Lima asserted, “Hates strong women who stand up to him and fight him”. ‘Fight back, our weapons are facts.’

Strong women are a threat everywhere. In Pakistan, an example of tech being used to take things out of context and make extreme narratives the norm is how a few controversial placards from the previous Aurat March commemorating International Women’s Day are being used to try and stop the event or intimidate its supporters.

Organisers of the march have faced massive abuse online. There are petitions in court demanding that the march be cancelled for being ‘anti-Islam’ or ‘westernised’. Fortunately, the courts have the sense to discard these. One judge who added that the slogans be ‘within the bounds of decency’ sparked criticism for overstepping his legal bounds and venturing into ‘moral policing’.

March organisers are also facing a backlash after a screenplay writer’s vile language against feminist activist Marvi Sirmed, not an organiser of the march but a supporter, when both were part of a panel on a television talk show discussing one of the controversial slogans. In the subsequent online war, the writer’s name started trending rather than Aurat March and its manifesto.

After someone shared Sirmed’s cell number on Facebook, she began receiving 60 calls a minute, her WhatsApp choking with thousands of message notifications.

On the face of it, such attacks, on journalists, women and human rights activists, seem insurmountable and overwhelming. But as Ressa and Rappler’s experience shows, when you decide to fight, they are don’t have to be.

Being organised and fighting back is key. When the onslaught began and Rappler’s finances took a hit, the team leadership decided to chop their own salaries. Well-wishers chipped in for the $ 40,000 a month racked up in legal fees. Rappler’s finances, illustrated in a slide shared by Ressa, started becoming more diversified. The share of advertising is decreasing, and more money is coming in from other sources. Many of the news group’s founders, including Ressa, who had invested their own money to begin with, are putting earnings back and giving equal amount bonus to the team – Rapplers as they are called.

“What doesn’t kill you makes you stronger”, assets Maria Ressa, repeating the line like a mantra more than once during her presentation.

What we need to do, she says, is “combine investigative follow up with tech, and create communities of action”. Rappler came in with a news agenda, taking on the issue of climate and good governance, following up with the Sustainable Development Goals. “We can’t just play a defensive game. We have to create a new eco-system”.

To the question of journalism and activism, she comments that in the old days there were strict rules about keeping reporting and activism separate. After being arrested, she became aware of the problems of false equivalence – one side weighted heavily against the other.

Also read: Stories Behind the Story: Maria Ressa and Why Journalists Need Protection

This is something we in Pakistan realised during the Zia dark years. Journalists can’t sit on the fence when democracy is in danger.

Ressa agrees. “In the battle for truth, you have to say who lies”.

The bottom line now? Fight back. Stand against bullies. After the atomic boming of Hiroshima and Nagasaki, the world came together to rebuild them. “An atom bomb has gone off in our eco-system”. We have to rebuild it, and come together globally, adds Ressa, vowing, “We will hold the line”. She’s not alone.

The good news is that it’s not just fake news, outrage and anger that spread fast. The second biggest thing that people like to share is inspiration.

Courage is contagious. Rappler is going with the hashtag #CourageOn. So am I.

Beena Sarwar is a journalist, editor and filmmaker. She can be reached through her website, ‘Journeys to Democracy’ at www.beenasarwar.com or through Twitter @beenasarwar. A slightly different version of this piece was first published in The News International, Pakistan.