The implementation of the Nirbhaya Fund brings out the Modi government's lack of seriousness regarding issues of women's safety and empowerment. 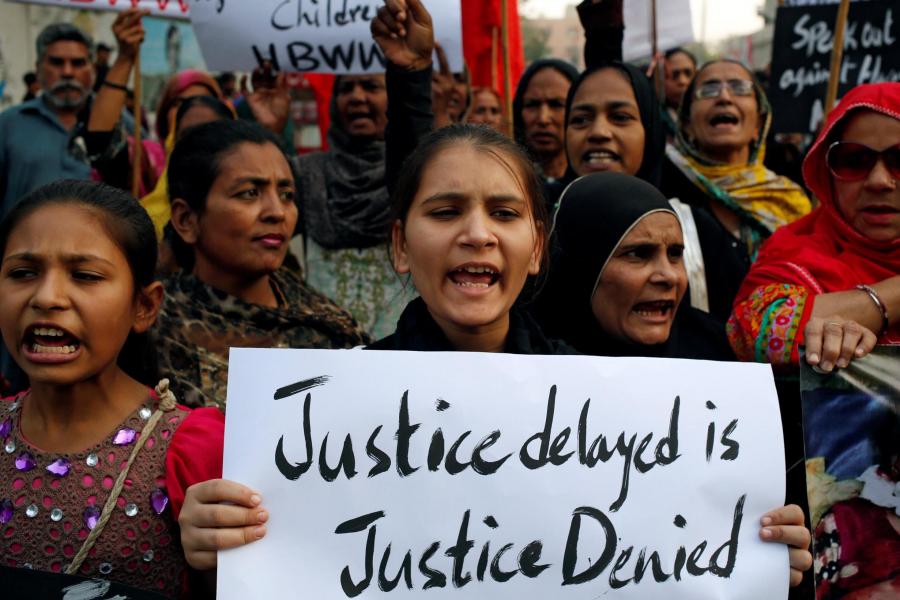 A girl holds a sign as she chants slogans with others to condemn the rape and killing of Zainab Ansari. Credit: Reuters

New Delhi: In the year 2012, the horrific Jyoti Singh gang rape had raised serious questions regarding women’s safety. The scale of socio-political movements that erupted in the wake of the gruesome incident rattled the Indian masses to their core.

The then UPA government had found it difficult to control public outrage. As a result, the government hastily formed a committee led by Justice J.S. Verma which recommended stricter laws and measures.

The government also set up a special fund for women’s safety called the Nirbhaya Fund. In line with the recommendations of the Justice J.S. Verma committee, the central government – time and again – granted money to various projects related to women’s security.

We used to the Right to Information in order to find out how much money the government has used from the Nirbhaya fund and on which projects.

To know about it was necessary because Prime Minister Narendra Modi had raised the slogan ‘Beti Bachao, Beti Padhao‘ (Save girl child, educate girl child) immediately after the present BJP-led NDA government had come to power. It was important to find out whether the Nirbhaya fund was being spent on saving the girl child, on their protection as well as empowerment, or not. If yes, where and how was the money spent? Therefore, we filed several RTI applications on the issue.

Also read: India Has Been Consistently Unsafe for Women But They Are Also Speaking Out

The government’s own data and the information obtained through RTIs make the truth behind the expenditure of the Nirbhaya Fund quite evident.

According to a written reply dated August 3, 2018 by the minister of state for women and child development, Vijendra Kumar, Rs 979.70 crore have been released under the Nirbhaya Fund till now. Of this, Rs 825 crore have been allocated for five major projects. It is noteworthy that the government announced Rs 3,600 crore as corpus money for the fund.

How much money was spent and where?

The amount was released for the implementation of ERSS. So far, only two states have launched Single Emergency Number 112 under the system. On November 28, 2018, Himachal Pradesh started the service at a cost of Rs 4.20 crore while Nagaland launched it at a cost of Rs 4.88 crore on December 1, 2018.

None of the BJP-ruled states, like Gujarat or Jharkhand, have launched the service so far. In a situation like this, one can imagine the reality behind the ‘Beti Bachao, Beti Padhao’ slogan.

Central Victim Compensation Fund (CVCF): In 2016, the Centre had released Rs 200 crore to 29 states and 7 union territories to compensate victims. According to the government order, Uttar Pradesh received the maximum amount of Rs 28.10 crore, followed by Madhya Pradesh and Maharashtra which got Rs 21.80 crore and Rs 17.65 crore respectively.

Let us look at the following figures of IndiaSpend for 2016-17:

According to the National Crime Records Bureau’s 2016 report, while 21 incidents of crime against women were recorded in India in 2007, the figure jumped to 39 in 2016.

In 2012, the rate of crime against women was 41.7% in a female population of one million. In 2016, the figure rose to 55.2%. The highest number of incidents recorded were ‘Cruelty by husband or in-laws’ forming 33% of all crimes that year.

In 2016, 38,947 rape cases were registered. That is, four women became victims of the heinous crime every hour.

As such, we find that if the state government plans to offer compensation to even 25% of the total rape victims, it will need Rs 292 crore at the rate of Rs 3 lakh per victim.

It is worth mentioning that the CVCF provides a cover to victims of ten other types of crimes as well.

Although the government is yet to provide the actual number of beneficiaries, it can be roughly estimated how many victims can be compensated with such a meagre sum. Could the victims have actually received the appropriate amount of compensation under this fund?

Integrated Emergency Response System (IERMS): The minister of state for women and child development stated in his written reply in the Lok Sabha on 27 July 2018 that the railway ministry was given Rs 50 crore in 2016-17 and Rs 100 crore in 2017-18 for the implementation of IERMS.

On the other hand, as per the railway ministry’s response to an RTI, it has only received Rs 50 crore so far. The question then arises: Did the minister provide false information to parliament?

In this context, a ‘request for proposal’ was invited on September 28, 2018, for installing CCTVs in 67 divisions of the Indian Railways. And so, the total progress made during the last three years amounts only to an RFP.

One-Stop Centre: The One-Stop Scheme was granted approval for implementation from  April 1, 2015. The objective of the scheme was to provide women affected by violence with medical assistance, legal assistance, police support, case management and other support.

Under this scheme, one-stop centres will be set up across the country in a phased manner. Till August 2018, Rs 109 crore had been released for the scheme whereas the total estimated budget for the scheme is Rs 867.74 crore.

The money was to be distributed among states. As of now, 232 one-stop centres are functioning across 718 districts of the country. According to a Hindustan Times report, another 536 centres have only been approved now.

According to the report, the first such centre began functioning in Bhopal in 2017. To date, no such centre has been set up in any other part of the state, including major cities like Indore or Gwalior.

Prevention of Cyber Crime against Women and Children: The home ministry shoulders the responsibility of tackling this challenge. A sum of Rs 94.50 crore was released for this during 2017-18.

According to the home ministry’s website, Rs 6 crore had been set aside for the training of 45,000 police officers, prosecutors and judicial officers till March 2020.

How many such training sessions have so far been organised? Only one, for 23 police officers in Meghalaya between April 2-6, 2018.

The remaining Rs 87.12 crore was distributed among states for setting up cyber forensic labs and appointing cyber forensic consultants to operate them. But so far, no such lab has come up.

Such is the sad state of affairs with the Nirbhaya Fund which was created as the result of a heinous incident that had once shook the country’s socio-political fabric. The Nirbhaya movement had led to such a mass uproar that it seemed no political party would dare ignore issues of women’s safety and empowerment any more.

With the BJP coming to power in 2014, and Modi raising the slogan of ‘Beti Bachao Beti Padhao’, it had bolstered the belief that the current government was gravely concerned about women and their honour and safety.

However, a mere look at the state of implementation of the Nirbhaya Fund gives a fair idea of the Modi government’s seriousness regarding issues of women’s safety and empowerment.

This article was translated from the Hindi original by Naushin Rehman