Alost identical to the 'Sulli Deals' app which sparked outrage last year, the new platform also uses manipulated images of Muslim women without their consent to treat them as chattel and harass them online. New Delhi: For the second time in the space of less than a year, internet trolls have taken to posting degrading, doctored images of Muslim women on the internet, this time through a platform called ‘Bulli Bai’, heavily inspired by the ‘Sulli Deals’ app which sparked a row in July last year.

The online portal ‘bullibai.github.io’, sharing an almost identical interface with the Sulli Deals app, stages an ‘auction’ for Muslim women (using the derogatory term ‘bulli’) with the sole intent of disrespecting these women, using manipulated images of them without their consent.

Several women reported that their images had been used on this platform, including The Wire’s Ismat Ara who posted a screenshot of her being called the ‘Bulli Bai of the Day’ on the website.

It is very sad that as a Muslim woman you have to start your new year with this sense of fear & disgust. Of course it goes without saying that I am not the only one being targeted in this new version of #sullideals. Screenshot sent by a friend this morning.

Ara has filed a complaint with the Cyber Crime Cell of the Delhi Police seeking the registration of an FIR under IPC Sections 153A (Promoting enmity between groups on the grounds of religion), 153B (imputations prejudicial to national integration), 354A (sexual harassment), 506 (criminal intimidation) and 509 (words, sounds or gestures intending to insult the modesty of women), to be read with Sections 66 (sending grossly insensitive information through a computer resource) and 67 (sending lascivious or lewd matter) of the Information Technology (IT) Act.

Also read: ‘Sulli Deals’ and the Elaborate Ploy to Blame Muslim Youth for the Derogatory App

In her complaint, Ara also noted that the phrase ‘Bulli of the Day’ “objectifies and degrades women” and requested the police to investigate a conspiracy regarding the platform.

“Social media being a form of public expression cannot be used to demean and derogate women in general and Muslim women in particular by misogynist sections of society,” Ara’s complaint further read. “It is indeed disappointing to see the impunity with which such hate mongers continue to target Muslim women, without fear of any sanction whatsoever.”

Several other Muslim women who are vocal on social media and elsewhere found their photos on the app. The mother of missing JNU student Najeeb was also on the list.

There are many Muslim names,including mine,in the obnoxious #BulliDeals , same as #SulliDeals
Even Najeeb’s mother has not been spared. It’s a reflection on India’s broken justice system, a dilapidated law n order arrangement. Are we becoming the most unsafe country for women?

A day after Ara’s complaint, the Delhi police registered an FIR cyber police station of Southeast Delhi under IPC Sections 153A, 153B, 354A and 509 and the case was handed over to superintendent of police Manzoor Alam. 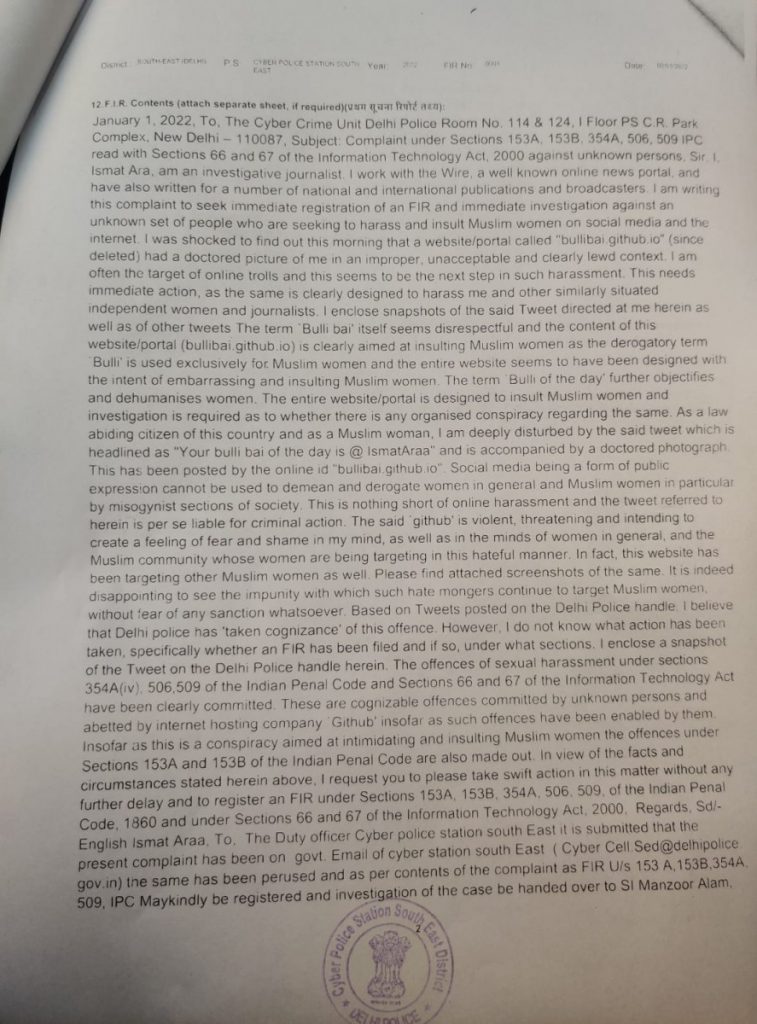 At the same time, the cyber crime division of the Mumbai police told news agency PTI that it had begun an investigation into the platform, which has since been taken down.

Ara also named Microsoft-owned content sharing platform GitHub in her complaint, where the Bulli Deals domain was hosted. On Saturday, IT minister Ashwini Vaishnaw tweeted saying that GitHub had blocked the user responsible for hosting the site.

Additionally, Maharashtra Cyber, a nodal agency which investigates cyber crimes in the state, also registered a case on the basis of a complaint made by one Sidrah, whose photograph also featured on the platform without her consent.

Registered my complaint at the @MahaCyber1 BKC branch. I have faith that the perpetrators will be bought to justice and that this shameful act will not go unpunished. I can not thank the Maharashtra Vikas Aghadi govt and @MumbaiPolice @MahaCyber1 for their constant support.

In the case of the ‘Sulli Deals’ app, two FIRs had been registered by the Delhi and Uttar Pradesh police, however, no significant action has been taken against those responsible till date, NDTV reported.

Several political leaders too have spoken out against the violation and asked for urgent action to be taken.

“It is unacceptable that this project of dangerous anti-Muslim misogyny is back. Appalling indictment of the state of affairs, that not only was nothing done last time, but these forces also felt emboldened to repeat the whole thing because the establishment backs them,” Congress MP Karti Chidambaram tweeted.

Shiv Sena MP Priyanka Chaturvedi said that GitHub removing the app is not enough and that the perpetrators must be punished.

Sir,Thank you.With due respect I had shared with you that besides blocking the platform punishing the offenders creating such sites is important.I hope @HMOIndia & @GoI_MeitY will support @MumbaiPolice to find these culprits&make them as well as platforms accountable #BulliDeals https://t.co/o1wXAnJVYq