Women attending the March 8 event in Jhunjhunu found the prime minister's words didn't quite match the arrangements made for them.

Jhunjhunu (Rajasthan): Prime Minister Narendra Modi’s address in Jhunjhunu on Thursday may have been planned as a celebration for International Women’s Day, but the arrangements at the event were far from women-friendly.

The makeshift toilets for women at the venue had no doors, no flush and no water – so they were basically useless. In the absence of proper signage and doors, even those ready to use the toilets without water were reluctant because of the crowd of men around them.

While launching the National Nutrition Mission – aimed at reducing undernutrition and low birth weigh – Modi stated that “not washing hands before eating food is one of the reasons behind the death of children”. But children and woman at the event couldn’t even pull the flush after they used the toilet, leave alone wash their hands.

Even the mobile toilets with doors had no water, so men and women had to urinate in the open at the venue. What there was, though, was the opportunity to take a selfie with cut-outs of either Modi or chief minister Vasundhara Raje at the numerous ‘selfie points’.

Women wearing black dupattas and saris were restricted from entering the premises. A mother, who was carrying an extra pair of black shorts for her child, was asked to leave them outside.

“They were not letting me inside because I was wearing black pants. When I asked how I can go back or leave my pants outside, they let me in – but only after taking away my black scarf,” said Sunita, a resident of ward five, Jhunjhunu.

“At Raje’s events also, black is not allowed. Now even the prime minister has started this. What’s the point?”

On being asked about this bizarre rule, security personnel said that there is a fear that people wearing black may protest at the event.

Despite this, Raje was shown black flags during her address at the event. 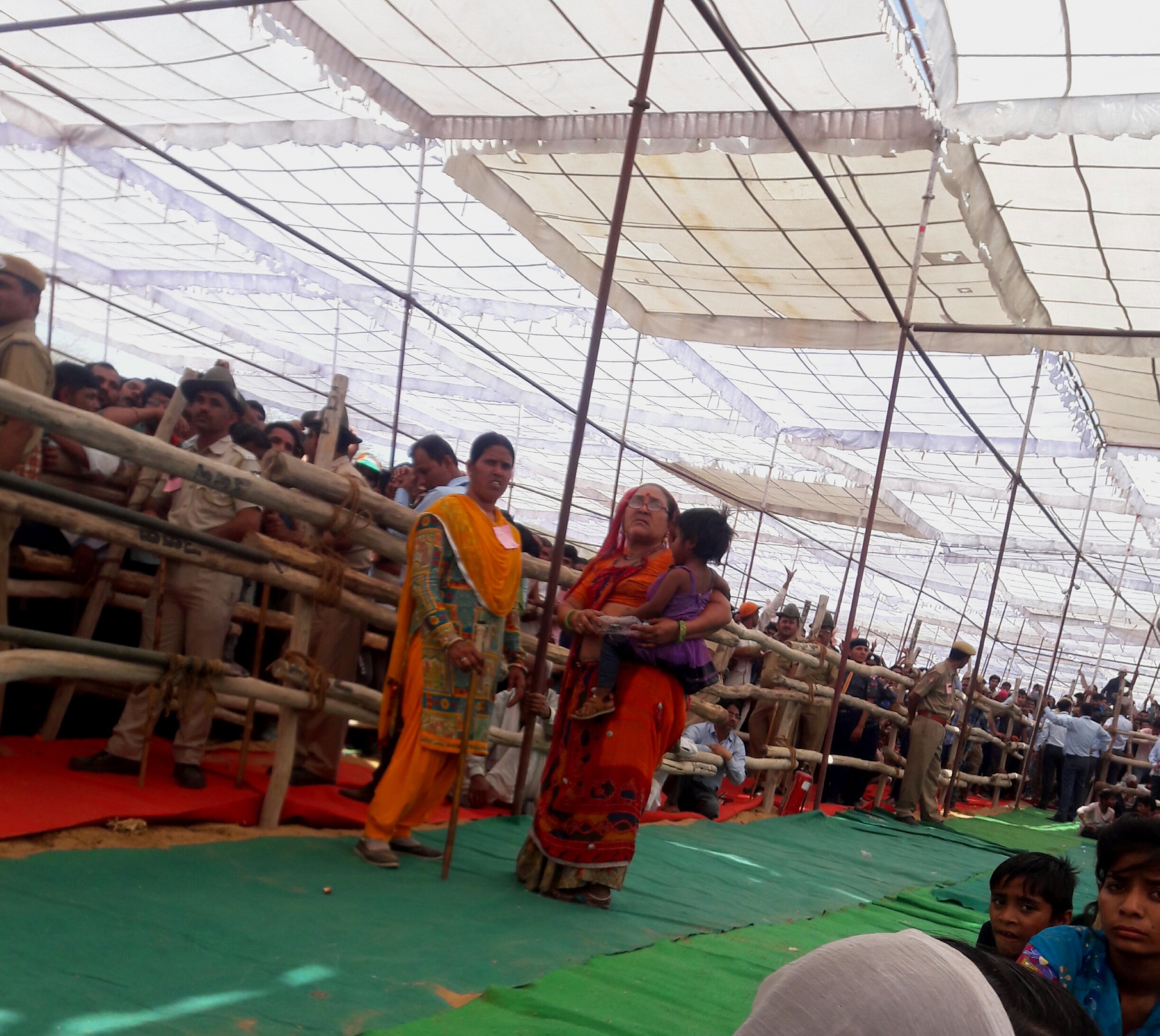 Sana requesting the security staff to let her go out to bring water for her granddaughter. Credit: Shruti Jain

While the prime minister spoke to the 200 mothers and daughters present on the occasion to mark the third anniversary of the government’s ‘Beti Bachao, Beti Padhao’ scheme, the women of all ages who were sitting in the general audience area were not allowed to leave the barricaded zone even to drink water.

Sana’s granddaughter was crying out of thirst, but neither was Sana allowed to go out and fetch water for her nor was a bottle of water provided. Until the session formally ended, she was unable to drink any water.

“My granddaughter is feeling suffocated in the crowd. She wants to get out and have water but the security is not letting me go out or get her water.”

Various government and private schools in Jhunjhunu were told that students must attend the event with their teachers. Various teachers told The Wire that the principal had received verbal orders from the additional district education officer.

“The principal asked us to take students to attend the event. There were orders from the ADO to bring students to the prime minister’s event,” Kamlesh, an English teacher at a government school in Tain village, told The Wire.

Speaking to The Wire, Teema Ram Meena, district education officer, Jhunjhunu, said “Every department was asked to invite people to attend the prime minister’s event, so even we did the same. But it wasn’t an order, it was merely a suggestion.”

In Jaipur, the secondary education department made it compulsory for schools to organise a quiz on nutrition and broadcast the prime minister’s address in Jhunjhunu from 1 pm to 2:30 pm for classes 6,7,8,9 and 11.

On the completion of three years of Beti Bachao, Beti Padhao, the Ministry of Women and Child Development has selected ten best-performing districts amongst the 161 districts where the programme was put in place. The performance was judged on three criteria – effective community engagement, enforcement of the Pre-Conception and Pre-Natal Diagnostic Techniques Act and enabling girl child education.

Sikar was selected as one of the best-performing districts under the ‘effective community engagement’ category. The indicators for the category include sensitisation and orientation of key stakeholders, grassroots functionaries and community members and outreach activities. Outreach methods include bulk SMS, WhatsApp, Facebook, Twitter, quiz/debate competitions in schools and colleges, door-to-door campaigns and using the Beti Bachao, Beti Padhao logo prominently in official letters and on school buses, etc.

The districts were asked to submit their nomination for any one of the categories, supported by documentary proof.

“We submitted a 70-page report to the ministry for the proof of the work we have undertaken under the ‘effective community engagement’ category. This includes photographs of the events or any innovative activity undertaken and the press coverage it got,” Rajendra Kumar Choudhary, assistant director, Department of Women and Child Development, Sikar told The Wire.

“Press coverage for every event we organised under the Beti Bachao, Beti Padhao campaign was essential. Sikar’s media was really very cooperative; even if we just inaugurated something somewhere, they never denied covering our events. We used to inform the reporters about the events beforehand and they would cover it,” Harshita Nirmal, brand ambassador from Fatehpur (rural) told The Wire.

However, residents feel that the events conducted by the brand ambassadors were a mere formality.

“It was in the newspapers that they were doing something or the other every day. Once, the brand ambassador came to our place for distributing peele chawal, but it seemed like it was just meant to be a photo-op for the newspapers. There is no time to interact or communicate about the issue, it’s more like an event,” said Sunita Joshi, a resident of Sikar.

Anganwadi workers say that they are the real grassroots communicators in the districts. “We have mostly seen them during the meetings of the department. At the ground level, it is on us to encourage mothers and their families to save the girl child,” said Sanju Devi, an ASHA worker in Sikar.

To refrain from sex selection in Sikar, an eighth vow was added to the traditional wedding culture of saptapadi – the bride and groom taking seven steps together in front of the fire. The Hindu Marriage Act says that a marriage is not legally a ‘Hindu’ one if saptapadi is not performed.

“All the priests were asked to add an athwan phera as a pledge for Beti Bachao, Beti Padhao to refrain from sex selection in Sikar,” said Choudhary.

The ministry asked districts to provide data to detail the improvement in intermediary indicators related to antenatal care registration, institutional deliveries and sex ratio at birth.

“We gave the information on antenatal care registration, institutional deliveries and sex ratio at birth from the PCTS software that works in Rajasthan,” said Choudhary. The Wire had earlier pointed out the issues in the PCTS software.

Jhunjhunu has been selected as the winner in the ‘enabling girl child education’ category. The indicators include incentives for promoting the education of girls, functional toilets, menstrual hygiene management, initiatives to arrest the dropout rate for girls in schools, prevention of child marriage, safe transportation and gender sensitisation programmes for teachers and young students. Unlike Sikar, Jhunjhunu didn’t have any brand ambassadors to carry out the awareness drive.

Despite the sudden official recognition, locals believe that the education standard in the district was always good. As per the 2011 Census, the literacy rates in Jhunjhunu and Sikar were 74.13% and 71.91% respectively, ranked after Jaipur (75.51%) and Kota (76.56%). In terms of female literacy too, these districts stood at 60.95% and 58.23% respectively, just after Kota and Jaipur. Jhunjhunu’s male literacy (86.9%) was highest among the districts in Rajasthan.

“Girls and boys from Sikar and Jhunjhunu were always good at studies because the kids here understand that if they will not study and get a job, then they will have to work on farms. Take any state examination, toppers will always be from either Sikar or Jhunjhunu. These districts were always the hub of education,” said Abish, a resident of Sikar.

“In the Shekhawati belt, only those who have a government service are respected in society. Since people mostly have government job, it restricts them to have only two children as having more than two kids hampers their promotions. So, they used to go for antenatal sex determination but after an effective crackdown on sex determination, the situation is under control.”

Jhunjhunu might have performed well on the government’s indicators, but a number of problems still exist when it comes to educating girl children.

“Our parents were always thinking about our education, but the problem is that our village [Kabirsar] doesn’t have any schools after class five. So we have to go to the nearby village to study. In that school too, after tenth, we have only arts as a subject. We wish to study science and commerce, but there is no provision,” said Nisha,  a class 11 student at Shri Kesharnath Senior Secondary School, Tain.

“Also, for English and Hindi, we have only grade one teachers because of which we are not able to understand the subjects well,” she added. 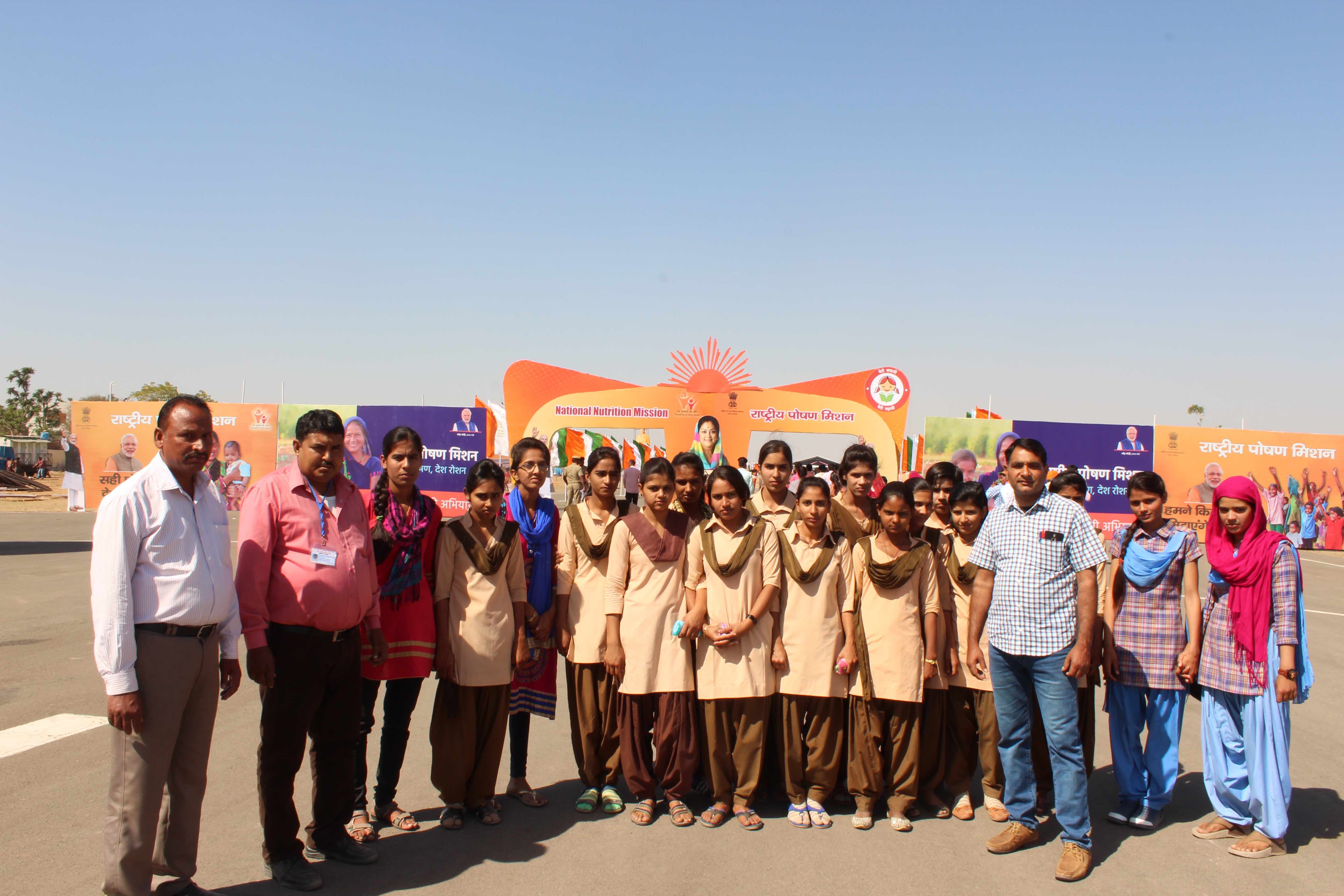 Students from a government school in Alipur along with their teachers at the event. Credit: Shruti Jain

Under the Beti Bachao, Beti Padhao scheme, schools are supposed to distribute sanitary napkins to girl students every month. However, students say that the distribution isn’t regular.

“Yes, the school provides us with sanitary pads, but the distribution is not regular. Sometimes it is given once in five months. On an average, two packets of pads are given, containing six pads each. But they aren’t sufficient, so we have to buy extra pads from the market,” said Ruksar, Nisha’s classmate.

“The distribution of sanitary pads started in school last year. We were given sanitary pads only on Independence Day and Republic Day,” said a student of Alipur Government Senior Secondary School.

When asked about the transportation facilities made available to the girls in the district, the students said, “The girls get a bicycle in class 9, but very few use them because usually we go to school along with our siblings and it is not possible to accommodate everyone on the bicycle,” said Priya, a student from Kabirsar village who prefers to walk to her school every day.

“Who drives a cycle these days, they should have given us a scooty,” said Preetika, a class 9 student from Jhunjhunu.

While the prime minister said in his address that Jhunjhunu was selected as the venue because of the tremendous improvement it has shown in balancing the sex ratio, locals believe that it was a calculated move to hold the event there, in order to counter-balance the growing popular dissatisfaction with the Raje-led BJP government.