Trigger warning: This article contains details about sexual assault and harassment which may be triggering to survivors.

New Delhi: With #MeToo jolting the Indian media with one account after the other, big names have been tumbling out with each passing day. Among the latest to be named by survivors is veteran journalist and minister of state for external affairs, M.J. Akbar. So far, allegations of sexual harassment have been made against him by nine journalists.

On Thursday, Union minister Smriti Irani was asked about the allegations against Akbar and said that she hopes women speaking out get justice. “I think the gentleman concerned would be in a better position to speak. I appreciate that the media is accosting his female colleagues, but I think that it is for the gentleman concerned to issue a statement, not for me as I was not present there,” NDTV quoted the textile minister as saying. “Women go to work to live their dreams and earn a respectable living. More and more women are winning support. I feel there are enough instruments to deliver justice. Hope these women get justice.”

Previously, Maneka Gandhi was the only Union minister to have spoken out about the allegations. “There should be an investigation… Now that women have started speaking out, we should take it seriously,” she had said.

On Tuesday, minister of external affairs Sushma Swaraj was asked whether the ministry will be internally probing the allegations against Akbar. In a video of the encounter, Swaraj can be seen ducking the questions and walking away.

To my pointed question on if an internal probe will happen on #SexualHarassment allegations against @mjakbar , EAM @SushmaSwaraj refuses to comment. Still waiting for a ministry statement @thetribunechd @MEAIndia #MeToo pic.twitter.com/ZHZ3EJhCPl

The MEA has so far declined to comment on the matter. Sources in the MEA have said that the allegations of misconduct do not pertain to his tenure as a minister of the government.

Former Mint Lounge editor Priya Ramani was the first to call him out, via a tweet. Ramani had written about her whole experience in a Vogue India article in October 2017 where she called out a ‘celebrity editor’ without naming him for his inappropriate behaviour with women journalists. She also described how Akbar set up interviews with women journalists in hotel rooms “with drinks at hand”.

“You are an expert on obscene phone calls, texts, inappropriate compliments and not taking no for an answer. You know how to pinch, pat, rub, grab and assault. Speaking up against you still carries a heavy price that many young women cannot afford to pay. Sometimes you are inconvenienced when the stories get out and you are asked to take a time out. Often, you are quickly reinstated. Why would you need to evolve, right?” the article opens.

On Monday, Ramani publicly identified Akbar as the central character of her piece.

Within hours, at least three more women journalists made allegations of sexual harassment against Akbar, who is presently a member of the Bharatiya Janata Party and has been at the helm of renowned newspapers like The Telegraph, The Sunday Guardian and the Asian Age.

He was this brilliant,flamboyant #editor who dabbled in politics, who called me-my 1st job- to his hotel room to ‘discuss work’, after i put the edition to bed-read midnight, & made life at work hell when i refused.,cudnt speak up due to various compulsions, but yes #MeTooIndia

@It was #MJAkbar I do not say this lightly..i know the consequences of false accusations &it has been now 17 yrs &i have no concrete proof. but i was young, just made features editor, super impressed with our brilliant editor, sensitive writer(read Riot after Riot), 1/4

OMG! He turned up at my friend’s house one night for a coffee. As a single mother with a sleeping child she told him she could neither invite him in nor go out with him. From next day he made life hell for her at their workplace https://t.co/3XRj7oWK94

In this case, #MeToo. Year: 1995, Place Taj Bengal, Kolkata. After that encounter, I declined the job offer.

So many of us have an MJ story. “Can I come over to your house with a bottle of rum?” he said. NO, was the answer…. Couldnt ‘do’ anything. Some dont get the meaning of No… they move on to the next, dont they https://t.co/eMnO6Y3PNX

Mine was in India Today late night party thrown by Aroon Purie, how he got drunk and took females in pool and had ‘fun’ what he said …@anjanaomkashyap @PadmajaJoshi @PreetiChoudhry #Metoo #MeTooIndia

On Tuesday, October 9, journalist Prem Panicker also added another account of M.J. Akbar harassing a young woman in 1994 while he was recruiting for the Asian Age. He told The Wire that his cousin, who is now deceased, was a fresh graduate who applied for a reporter’s job and went to the Leela Kempinkski in Mumbai to be interviewed by Akbar. After being greeted by his assistant, she entered the bedroom area and sat on the couch, when Akbar proceeded to sit beside her, put his arm around her and ask her about herself.

Panicker said the interview concluded mere minutes after his cousin told Akbar that she was interested in journalism because her cousin Prem Panicker was one too – and that he was waiting in the hotel lobby for her. She recounted the entire incident to Panicker at a cafe immediately after. Panicker said his cousin eventually did not enter journalism, adding that “in newsrooms across this country, there are many, similar stories involving Akbar. Not all of them got away by being able to claim a relationship with a journalist.”

On Wednesday, journalist Shutapa Paul, the founder-editor of NewCrop, detailed her own account of harassment from Akbar on Twitter. In 2010, Paul has said, she joined India Today in Kolkata as a 26-year-old reporter. By the end of her first year there, Akbar had taken over as editor of the publication.

When #MJAkbar 1st came to Kolkata to meet the team at ITC Sonar, just as we were about to leave, he squeezed my elbow rather painfully and said that I should call him directly if I needed something. I didn’t react thinking that he was only being encouraging as a boss. #MeToo 5/n

Whenever he came to Kolkata, Paul has said, Akbar would invite her to his hotel, usually after 8 pm. He would then drink and ask her to do the same.

#MJAkbar forced me to have at least one drink. He stared, stayed quiet, while I told him about all the stories that I planned to get done in the next few months. I had lots and lots of ideas and I hoped he would approve of them. But he did not want to talk about story ideas. 9/n

I was scared that #MJAkbar would message or summon me. Thankfully he didn’t. I believed this was the end. The next day he asked me to drop into his Nizamuddin East residence. On the way to the airport to catch my flight back, I dropped in. #MeToo 17/n

His home office was dark and there were old Hindi ghazals playing in the background. #MJAkbar didn’t have much to tell me, again just sat silently & stared. I said I had a flight to catch, a friend waiting outside to drop me to the airport. ‘Bf?’ he asked. No, just a friend. 18/n

As I tried to dash out the door, #MJAkbar gave me a hard hug, I ducked whatever else could have followed and fled. He seemed amused at my ducking. #MeToo 19/n

After this incident, the next time Akbar was in Kolkata and tried to make late night appointments, Paul said she always avoided going. And after multiple refusals, she became “completely invisible in the organisation”. “None of my stories were getting approved, what ever I wrote was being ridiculed at edit meetings. Some Delhi colleagues told me about this,” she said.

Ghazala Wahab, who worked with Akbar in Asian Age, wrote a detailed first person account on The Wire of how Akbar molested her. “The next evening, he called me in his cabin. I knocked and entered. He was standing next to the door and before I could react he shut the door, trapping me between his body and the door. I instinctively flinched, but he held me and bent to kiss me. With my mouth clamped shut, I struggled to turn my face to one side. The jostling continued, without much success. I had no space to manoeuvre. Fear had rendered me speechless. As my body was pushing against the door, at some point he let me go,” she wrote.

Saba Naqvi too wrote an article detailing harassment by Akbar in Kolkata.

On October 10, sports journalist Kadambari M. Wade, who is now based in the US, tweeted about her experience of harassment from Akbar. According to her, across multiple interactions, Akbar stood too close and stared at her chest. When she told her sports editor, he reportedly said, “That’s just Akbar, don’t worry. He’s like that with everyone.”

(6/7) I’d had enough. I’d told my dad. He was prepared to come and confront MJ Akbar. I said I’d fight my own battles. So I said, “Sir, I’d much prefer if you’d look at my face instead of my chest when you’re talking to me.” He looked up. I told my colleagues. @priyaramani

“I don’t recall if MJ Akbar & I ever spoke again. Blank. I would not have been able to work in AA if it hadn’t been for a bunch of sports desk colleagues who treated me just like a colleague & protected me. They shouldn’t have needed to. I’m grateful they did,” she concluded.

The Wire has contacted Akbar to seek his response to these allegations and others that have been shared with The Wire and this report will be updated if he responds. 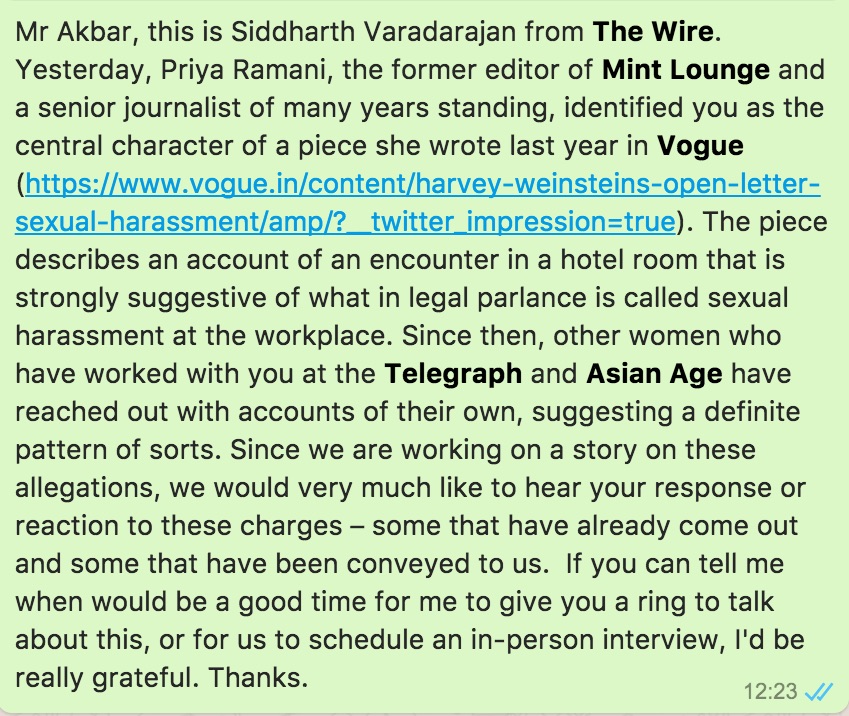 A screenshot of The Wire‘s attempt to reach M.J. Akbar.

Akbar, The Wire has learnt, is out of the country at present and is scheduled to return in three days.

What began with Tanushree Dutta accusing her co-star Nana Patekar of harassing her repeatedly, snowballed when AIB comedian Utsav Chakraborty was accused on October 4 of sexually harassing a woman on social media by sending her “unsolicited dick pics” and asking for her nude pictures.

Soon after, journalist Sandhya Menon shared an account of being harassed by K.R. Sreenivas, currently resident editor of the Times of India in Hyderabad, in 2008 when they both worked at the Bangalore Mirror.

Menon followed that account with another one about Gautam Adhikari, former editor in chief of DNA in Mumbai. Following a night out with Menon and a friend, Menon said Adhikari kissed her without consent and then later asked her not to tell anyone.

Hindustan Times chief of bureau Prashant Jha has also stepped down after allegations against him were levelled by a former colleague.

After seven women petitioned the Times of India to take action against its Hyderabad editor K.R. Sreenivas, he has been sent on ‘administrative leave,’ according to a statement sent out by the organisation.

AIB co-founder and CEO, Tanmay Bhat has also stepped away from the company in light of his inaction after the woman accused Chakraborty of sexual assault. Gursimran Khamba, another AIB co-founder, was also hit by allegations and he has been sent on a temporary leave of absence from AIB until there is more clarity on the matter.

Update: This story was updated at 6:30 pm on October 9 to include Prem Panicker’s account of his cousin being harassed by Akbar in 1994.

Update: This story was updated at 6 pm on October 10 to include Shutapa Paul’s and Ghazala Wahab’s accounts.

Update: This story was updated at 6 pm on October 11 to include Kadambari M. Wade’s account.

Update: This story was updated at 11 am on October 12 to include Smriti Irani’s comment.