How Men Turned a Peaceful, Women-Led Protest Into an Excuse to Riot

The organic nature of women claiming their spaces was replaced in the nightmare reality of men who killed, set houses and shops on fire and caused havoc in north east Delhi. The unmistakeable aspect of the Citizenship Amendment Act-National Register of Citizens narrative, as introduced by the BJP government, was how it was obsessed with the idea that the Partition was an unfinished business.

The idea was to convert people into grave-diggers of the present.

The instability, newly invented through the NRC, would end with a whole bunch of “doubtful citizens”. The two-nation theory’s revival today would only create detention centres or second class citizens. The ghosts of partition from the heaths of memory are now insidiously carried back on the horse-cart of the CAA-NRC.

But quite interestingly, this attempt to make people relive the Partition was countered by an unexpected set of citizens: the women.

From female college students of all religions and regions to homemakers and working Muslim women of poor localities, a set of women stood up for the constitution. They started occupying public spaces, through day and night, and chanting slogans on constitutional nationalism and social freedom in spaces otherwise socially designated to men. They imbued the tricolour with a new social meaning, presented Gandhi-Ambedkar-Azad-Savitri-Fathima as a coherent team of nation’s founders and made the constitution into a mass icon. 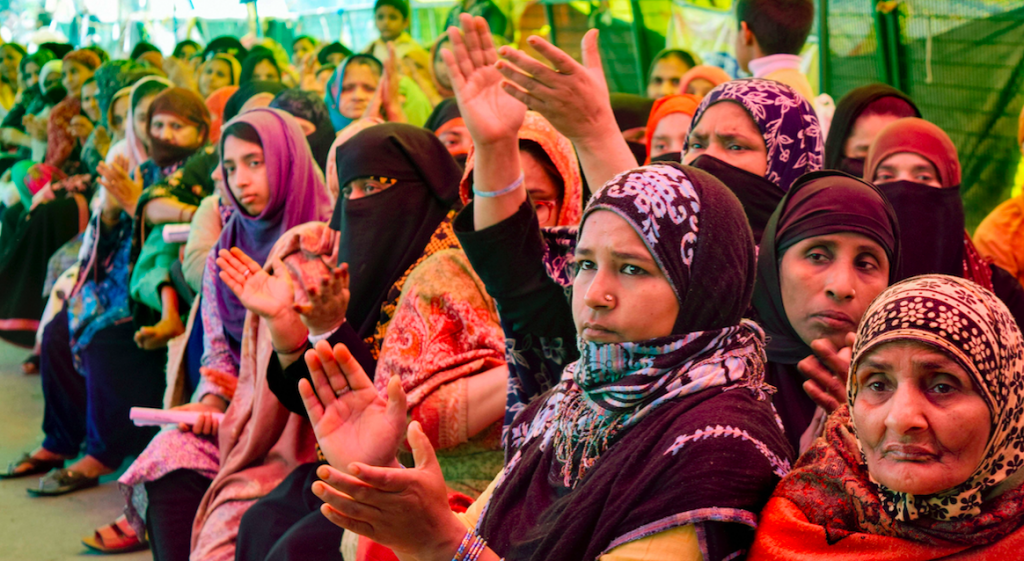 This took the ruling BJP by surprise: first, it was a set of resilient women they found themselves against. Secondly, these women snatched the whole narrative of Partition away from them by insisting on the inclusive, egalitarian India through their movement that exhibited non-violence so perfectly.

The history of Partition is not just about a colonial idea of two nations being internalised by leaders of the colonised but it was also an act of male, feudal entitlement.

In the voting to decide on the Partition, who had the rights to vote?

Landed gentry made of upper caste, upper class men from both Hindu and Muslim communities.

As Hindu and Muslim majoritarians believed in a rule of majority where they have power, they reduced the whole country into this fight for dominance. Partition, like wars and violence, should also be seen as a crisis of the masculine craze for control.

Also read: This Women’s Day, Let Us Celebrate the Organic Change in the Way Protests Are Held

In this female assertion, what started as a project to bring back the Partition into the full swing of the present looked to have achieved the very opposite: it started undoing the very legacy of Partition by bringing out the women in general, and especially the poor Muslim women, who were either destined to live in the shades of either Partition or the male frame of Hindu-Muslim politics, or both.

The majoritarianist Hindu men’s symbolic nationalism, their understanding of Muslims as a community of male perpetrators and women victims and their absolute control of the women of their community that they thought they owned…all of this was countered by the sorority across generations.

The movements of people from the subaltern groups are sustainable but given they belong to communities that are not dominant, the impact is very likely to be less. On the other hand, student movements, given they have the new social energy in them and they cut across the social groups, are very usually impactful but they can’t be sustained for a long time.

When the sustainability of the subaltern women and the impact of student movements synergise, it is usually the beginning of a fundamental social change for each family, community and the society at large.

But men cannot let that happen.

Barira, one of the protestors at Mumbai Bagh. Photo: Sukanya Shantha/The Wire

Though the initial attempts to provoke the sit-ins and occupations through threats and violent actions were all handled very well by the women protesters, the attempts did succeed at a certain point in Jaffrabad, after women moved out of their a month-old protest site to also occupying the highway and blocking traffic.

When the threats from Kapil Mishra came, the people in the governments didn’t do anything to denounce the speech, or talk to the protesters to give them assurances about the demands of the women.

Nor did the police do anything to avoid male gatherings on both sides which eventually led to stone-pelting, and once this started it became a male scene all over again. It is a story of male violent assertion and another set of men, in government and bureaucracy, committing terrible crimes of omission.

The organic nature of women claiming their spaces was now replaced in the new “nightmare reality” of men who killed, set houses and shops on fire and caused havoc in north east Delhi.

The male, majoritarian mad violence seems to have ended for now, leaving many men, women and children in the relief camps with pain, shock and wounds and huge losses of every kind.

But women sit-ins are continuing: women of Shaheen Bagh, Seelampur, Turkman Gate, Hauz Rani, Inder Lok and other places. After this bloody attempt at a lesson, at showing Muslim women their “place,” this movement needs the participation of all those who not only believe in the foundational principals of Indian Republic but also believe in women’s equal right to the public spaces, in theory and practice.

Will this new union of women on the street be drowned in the macro-male world order where women continue to be subjects, objects and victims or will they succeed in exorcising the ghosts of conflicts and set us on the path to a more meaningful actualisation of the promises of India?

It is not just a question of our survival as the people of India, but one of women’s politics gaining the strength to change our political discourses completely. On this women’s day, one can only hope and pray we survive politically through these women!