'Indeed Lies Do Not Have Legs': Ghazala Wahab Replies to M.J. Akbar

In refuting my story of molestation and harassment, Akbar has tried to hide inside his supposedly “very tiny cubicle, patched together by plywood and glass”. Either he is lying, or age has caught up with him.

In attempting to refute my story of molestation and harassment, Akbar has tried to hide inside his supposedly “very tiny cubicle, patched together by plywood and glass”. Either he is lying, or age has caught up with him. I would prefer believing the latter, so here is something to refresh his memory.

The Asian Age started in 1993, from an urban village called Khirkee Extension in south Delhi. Later that year, it moved to the second floor of Surya Kiran building. This is where I joined. This was indeed a large hall with a horse-shoe shaped central work station area presided over by chief sub-editor Kaushik Mitter. Even here, Akbar had a proper cabin to himself. It could have been made of plywood (what else are office interiors made of in any case?) and glass. But the glass was not transparent and he kept his door closed. This Asian Age office was so small that it did not even have a toilet. We used to dash across the corridor to the AFP office whenever we needed to.

Sometimes in mid-1995 or early 1996, Akbar, along with the features section and the Asian Age‘s bureau, moved to the fourth floor of Vandana building across the road from Surya Kiran. This was a temporary move as the Surya Kiran office was being renovated and refurbished. We stayed here for under a year and in early 1997, we moved back to the new, swanky Surya Kiran office. This was a bigger office with fewer people. The news desk was shifted to another floor in Surya Kiran building. 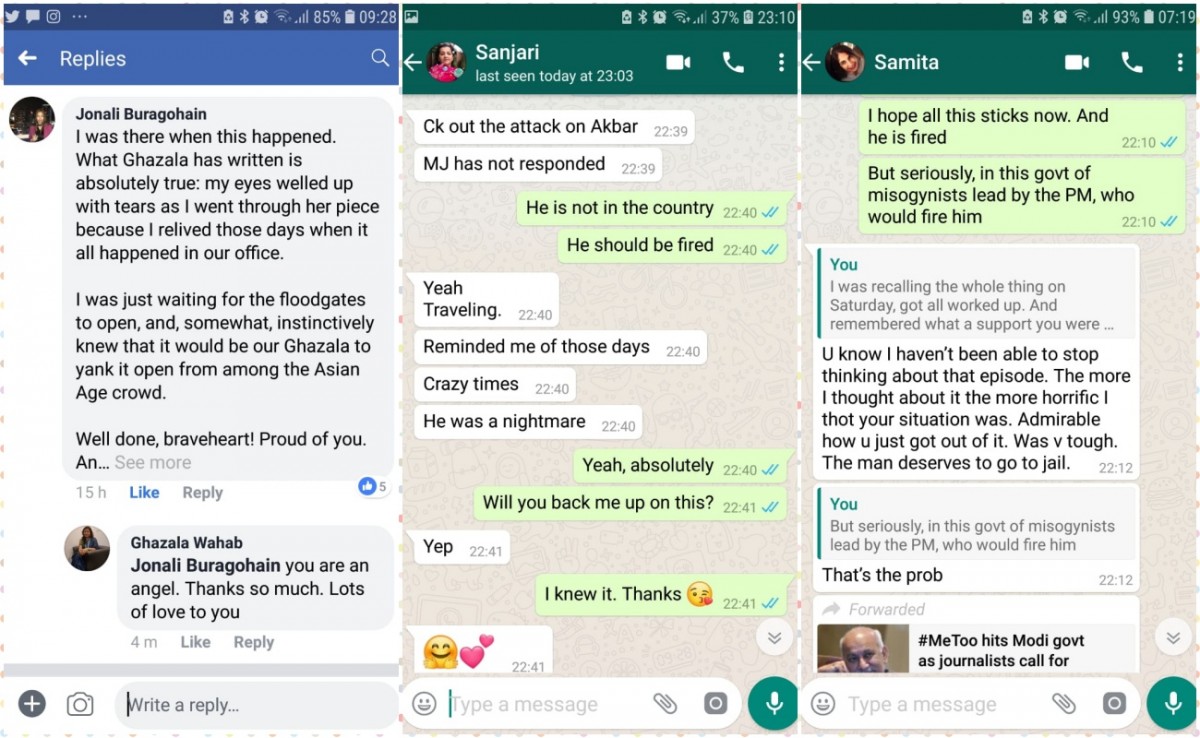 Messages from Ghazala Wahab’s former colleagues at Asian Age backing up her account of her experience working with M.J. Akbar. Credit: Author

The glass and wood cabin

It was in this office that my desk was placed in the tiny corner next to Akbar’s office. And yes, it was an office alright. It was big. His polished wood desk was huge (lined with a row of Ganeshas) and had a small work station attached to it. At his back was polished wood (all gloss) wall-to-wall hutch cabinet with storage at the bottom and book shelves at eye level. On the other end of the room, directly opposite to his desk, was the tripod with the huge dictionary, with thickness of nearly a foot.

As a mark of how fancy and removed from all of us Akbar was, the buzz in the office was that his room was sound-proof.

And indeed, it could have been because unlike his previous cabins – both in Surya Kiran as well as in Vandana building – here, when he shouted inside his room, I could only hear muffled noises despite sitting right outside. In his earlier cabins, not only the office, but probably the whole building reverberated whenever he screamed his lungs out either at a journalist in his room or at a poor blighter on the phone. Not at the new office, which not only had proper work stations separated by ‘plywood and glass’ for sub-editors, but had an open cubicle for the bureau chief!

His second defence is that I complained to Veenu Sandal, who has described my “version as nonsense, in an interview to the Indian Express”. Sadly, age has taken a toll on his retention power too. I never complained to Sandal, rather I complained about her in my article, accusing her of peddling Akbar to me. Similarly, I did not continue working for him. As I have written, I quit, handing over my resignation to his secretary Rachna Grover. 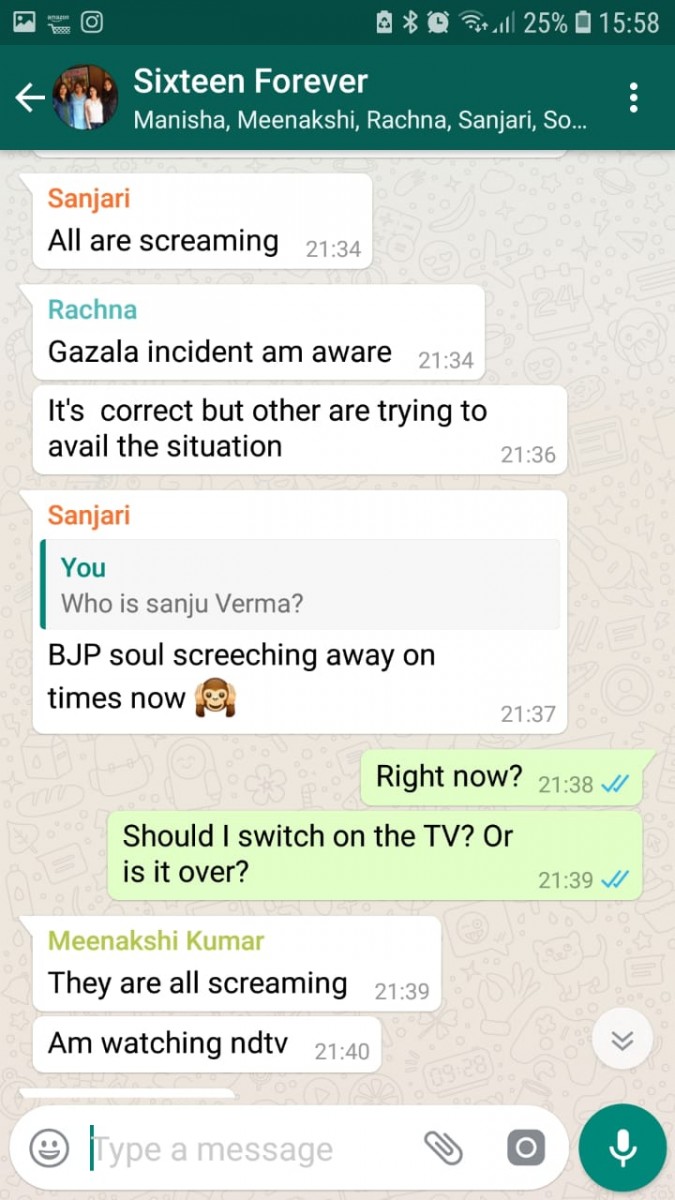 Rachna Grover admitted in a group chat that she was aware of Akbar’s harassment of Wahab.

Grover has been my friend since my time working at The Asian Age and was a witness to not only what happened with me, but to those who came before and after me. I understand her compulsion to defend Akbar out of her sense of loyalty to him, which is why she gave a statement to Free Press Journal. Interestingly, her defence, like Akbar’s, hinges entirely on the supposed smallness of Akbar’s office.

I am attaching the screenshots of some of the conversations I had with my friends and former colleagues from The Asian Age since Akbar’s past caught up with his present, including one with Grover, where she says she was aware of my story, and said, “It’s correct but others are trying to avail the situation”.

I am sorry Rachna, I did not mean to drag you into this. You stood by me when I needed it the most. That’s what matters.

All screenshots provided by Ghazala Wahab.

Ghazala Wahab is executive editor FORCE newsmagazine and co-author of the book Dragon on our Doorstep: Managing China Through Military Power.