Focus Should Be on Root Causes of Child Marriage, Not Increasing Marriage Age: Activists 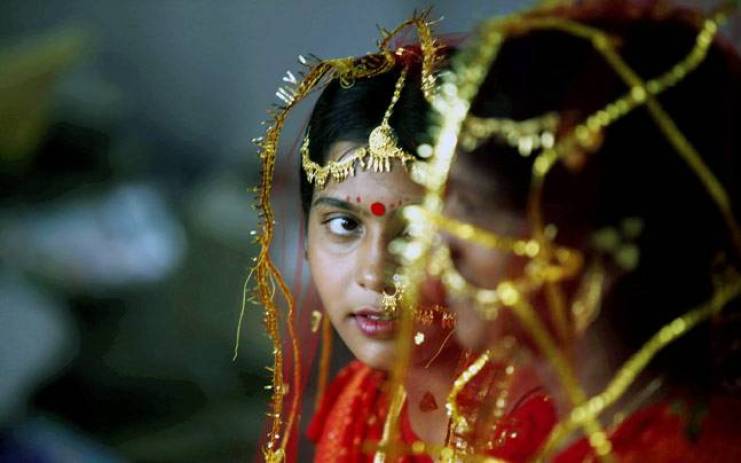 New Delhi: Child rights activists believe that by increasing the marriageable age for women from 18 to 21, the government is missing the opportunity to focus on solving the real issues that lead to child marriages in the first place.

In his Independence Day speech on August 15, Prime Minister Narendra Modi announced that the government will raise the age of marriage for women from 18 to 21. A committee has been formed for this, he announced, and a task force to consider the situation had already been notified by the Centre. The 10-member task force was notified on June 4, and is headed by MP Jaya Jaitly and NITI Aayog member Vinod Paul.

The government believes this change will empower girls and young women, increase their access to education and improve the infant mortality rate (IMR) and maternal mortality ratio (MMR). According to data released by the Ministry of Health and Family Welfare and the Sample Registration System of the Registrar General of India, the country’s MMR has rapidly declined – to 113 in 2016-18 from 122 in 2015-17 and 130 in 2014-2016.

However, ‘Young Voices: National Working Group’, formed in response to the task force, published a report on July 25 claiming otherwise. The report, which surveyed about 2,500 adolescents across 15 states, says, “…increasing the age of marriage will either harm; or have no impact by itself unless the root causes of women’s disempowerment are addressed.” A group of 96 civil society organisations were involved in drafting the report.

Also read: The Unfinished Poem: Memories of a Child Bride

In a press conference on Monday, Enakshi Ganguly, activist and co-founder of Haq: Centre for Child Rights, said, “We are pleased to say that the task force chaired by Jaya Jaitley has followed a very democratic process. It has heard everyone – experts, academics, civil society organisations and most importantly, children and young people.”

Kavita Ratna, director of advocacy at The Concerned for Working Children, a child rights non-profit, was also part of putting together the Young Voices report.

She said, “If the root causes of child marriage are not addressed, then this law is actually going to harm us. One girl child even told me that female foeticide will increase because the parents will be more burdened by girl children if the marriageable age is increased. If they’re allowed to vote at 18, why can’t they decide if they want to get married?”

Two young women were chosen to represent the views of the young in front of the task force. Mamta Jangid is a teenager from Ajmer, Rajasthan. She asked if despite the legal age of 18, child marriages continue, how will they be stopped if the age is increased even more? “When the sarpanches of villages themselves indulge in child marriages, how will they stop it? What is the need to increase the age when despite having schools in villages, girls are not allowed to go? In some cases, child marriages have been the result of leaving education, and not the other way around. Education should be the main focus of the government.”

“If a woman can vote at 18 years, why can’t she decide if she wants to get married at the same age?” she asked.

Priyanka Murmu, a Class 12 student from Jharkhand, was the second girl to represent young voices before the government task force. “For parents, when a girl is born, they immediately start thinking about her marriage. For them, their end goal is marriage. How, in such a situation, can the marriageable age be increased? Women aren’t educated, they don’t have employment opportunities either. They will end up being burdens on their parents. So, our first focus should be on getting them educated and finding employment opportunities for them.”

The chairperson of the task force had told the girls, in closing remarks, “We have heard you loud and clear.”

Madhu Mehra is the founding member of Partners for Law in Development. She said, “There is no doubt that law plays an important role and we have had a law which prohibits child marriages from the colonial times. The concerns have shifted from child widows or infant widows to empowerment of girls. Does the current law, as it is functioning, warrant a change as the one that is being proposed? We need to look at how the prohibition of child marriages Act is functioning. How many girls are able to get their marriages nullified?”

“We found that the majority of cases brought are those wherein the woman has eloped or married somebody of her own choice, or where the couple are seeking protection from their families. Some cases are also against arranged marriages, to nullify marriages gone wrong. Age is not really the reason that anybody is using the law to nullify the marriages.”

Also read: Criminalising Sex With Minor Wife is a Step Towards Securing Justice for India’s Children

She further pointed, “The law [Prohibition of Child Marriage Act], which was actually designed to protect young people, has been set up in such a way in the Indian context that it is being used to harm young people, and you don’t need honour crimes when you have a law lending itself for the cause. Just remember, that if the minimum age is increased from 18 to 21, the parents can use the law to punish elopement right up to 21 years. Women could become even more vulnerable to parental control and backlash.”

She added, “Girls will continue to be pushed into early marriage because of poverty, there is no opportunity for them outside it and during COVID-19 with a greater number of families being pushed into poverty, more girls are getting married. But these marriages don’t have legal validity, which means they cannot exercise their legal marriage rights.” For instance, she referred to a case in Karnataka where a young widow was denied pension after her husband’s death because her marriage stood nullified as per the latest laws of the state. She also pointed to the fact that most families who will be prosecuted under this law are poor ones. “Most families which will be penalised or criminalised will be poor, because most child marriage is a poverty phenomenon.”

Mehra had made a submission to the task force set up by the government and had a meeting with the law ministry as well as the National Commission for Women. “It is not a time to not tinker with the PCMA, which is perfectly fine as it is, but it is a time to look at POCSO and to reduce the age of consent.”

Mary E. John, senior fellow at the Centre for Women’s Development Studies, presented a memorandum to the task force. She said, “One of the concerns that I have is that the field of research in this area of child marriage is inadequate. We’re dealing with a challenge of what we know, or what we think we know. We all think that a higher age of marriage is by definition a better thing, and translates into more opportunities for women, more decision-making power for women. I was remarkably surprised to see how weak the actual link of age is. Let’s assume that there is a good intention at some level in wanting to increase the age of marriage for women, but the belief that simply increasing the age will translate into better outcomes is in fact not worn out. Age per se doesn’t really make much of a difference.”

She added, “If the girl’s surrounding infrastructure doesn’t support her education, if new jobs for her don’t sprout up in her vicinity and simply the age of marriage were to change, even the level of her nutrition would not change much. But if a nutrition plan were to be implemented, her poverty levels would improve…”

The activists agreed that a lot needs to be done to empower young girls in India, and simply changing the marriageable age won’t fix anything.