Even if we wanted to ‘out’ these political men, these ‘progressive’ perpetrators, we are told, time and time again, that it would ‘not be strategic’, or that we need to ‘keep our dirty laundry inside the movement’.

The following is an excerpt from ‘Intimacy and Injury: In the Wake of #Metoo in India and South Africa’ edited by Nicky Falkof, Srila Roy and Shilpa Phadke. Chapter nine of the book is titled ‘Progressive Men and Predatory Practices.’

The riot vehicles had made their way onto campus that night, like they had been doing almost every night since the start of the protests demanding free, decolonised, quality higher education in South Africa several weeks before. This time police were demanding students and staff evacuate the buildings they had occupied. The group, smaller than usual, split as some of us ran inside the building, barricading ourselves in with whatever chairs and tables we could find. The remaining students and sympathetic staff sat outside, blocking the entrance. Those who have been involved in this type of political organising and protest will know the adrenaline-induced haze that comes from such quick protest decision and action. The stack of tables blocking the doors had almost reached the ceiling by the time I took a breath and cleared the haze from my eyes. The room was almost entirely populated by men.

The police began by demanding our evacuation on their loudhailer, then arresting some of those who were blocking their entrance to the building. Finally, in a move we had grown to expect from them, they started throwing tear gas canisters through the window. Trapped, with our eyes burning, the only liquid we could find to relieve the pain was a litre bottle of Oros that someone found in the corner. Oros is an orange concentrate juice that is served at birthday parties, after school sports games and as a sweet celebration of a good school report, a ubiquitous marker of a South African middle-class childhood. We passed the Oros around, gagging as the sticky sweetness clung to our faces. A few minutes later, I was assaulted by a comrade inside the room. 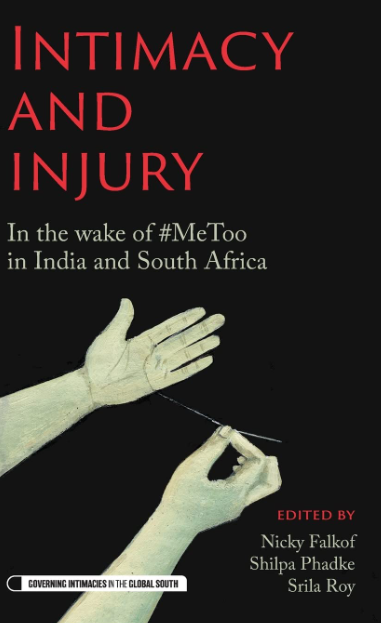 ‘Intimacy and Injury: In the Wake of #Metoo in India and South Africa’ by Nicky Falkof, Srila Roy and Shilpa Phadke. (May 3, 2022)

In late 2019, I presented a paper titled ‘Progressive Men and Predatory Practices’ at a workshop on sexual violence in the public sphere at the Centre for the Study of Law and Governance at Jawaharlal Nehru University (JNU). I use the term ‘paper’ here loosely. My colleagues presented papers, the results of rigorous research, offering deep analyses woven into appropriate theory. I, however, chose to use my paper to tell a personal story, to reflect on a moment years before that had caused me both psychological and intellectual unease. I had never recounted the story out loud before and it is still not entirely clear to me why I chose that specific setting to do it – a room filled mostly with strangers in a foreign country. It may be that I felt a sense of safety, such that I could finally share this story and my thoughts around it without the fear of a comrade overhearing, without speculation of who the ‘perp’ was, without bringing the public and private politics of a movement I still broadly supported into disrepute.

The retelling required me to piece together a narrative, to connect the dots not just of the event but of its political meaning. So, there I sat, in a stuffy seminar room in Delhi, sweating so much that my dress clung to the back of my seat, telling for the first time the story of my assault during the 2015 South African student movement. I spoke not of the details – I will not share those here either – but of the feminist and political tension, the internal tearing apart, that I felt afterwards. I am still not sure if anyone saw what happened; it feels hard to believe that no one did. I find it quite easy to justify that the chaos of what was happening around us meant that it was unlikely anyone saw, and even if they did, it was possible that the adrenaline haze made it difficult to make sense of what they had seen. Still, the years since that moment have been marked not with speculation on the actions of others but rather a coming to terms with my own action – or rather inaction – following what happened. I said nothing when it happened, and I had continued to say nothing.

In truth, it was not that I felt silenced but that I was wilfully choosing to forget what had happened. I exiled it from memory, asking what my individual story mattered when the broad political aims of the movement were those that I supported and that already occupied a vulnerable and turbulent space in South African political memory?

Also read: Verse Affairs: A Book of Feminist Poetry Without Any Woman Poets

In Remembering Revolution, Srila Roy explores the underground, everyday gendered dynamics within the Naxalbari movement in India during the 1960s and 1970s. Roy reflects on how the ‘forgetting’ of the violence that was internal to the revolutionary community – those ‘little violences’ and acts of betrayal within interpersonal relationships within ‘the movement’ – was an act of repudiation more than of silencing, forgetting or erasure (Roy, 2012: 14). South African student protesters experienced severe state repression as riot police used rubber bullets and stun grenades to squash protests at universities around the country. The memory of this political violence endures while the women of the student movement struggle to name the violence experienced at the hands of their male comrades. Similarly, I felt that I did not want to damage the public political life of this student movement. I knew well that racist and conservative communities in South Africa were eager to tarnish and destroy it. Nor did I want to be responsible for contributing to the internal crumbling of the movement. So, I willed myself to remember the student protests the way I wanted them to be remembered by others.

The discussion that followed my talk at JNU taught me that this experience was not mine alone, nor was it rare; in fact, it was frighteningly common in progressive movements and spaces. For decades, JNU has been at the centre of leftist critique and activism in India. Recent years (and months) have seen increased political organising against anti-Muslim and fascist ideas and policies on the campus. The women in the seminar room, mostly students, shared with me their own experiences of navigating activist circles, publicly punted as feminist spaces but riddled with overt sexism, harassment and assault. When the enemy is so clear, in this case the right-wing Hindu nationalist government, it is easy for us to see the threat ‘over there’ and difficult to recognise (or reconcile) when it is ‘right here’, in our midst.

Those with experience in these student spaces will recognise a specific brand of ‘leaderdom’ as more the result of media portrayal than any kind of internal consensus. We have grown accustomed to broad, nuanced and politically evocative moments being remembered through the image of one man with his fist in the air. Perhaps he will have read a few pages of Kimberle Crenshaw’s scholarship and will passionately spew a line or two about intersectionality before cornering you and shouting at you so loudly that the tiny hairs on your chin blow with his breath. Many of those who are publicly viewed as or become student leaders are, unsurprisingly, perpetrators of abuse; they are, if you want, ‘progressive perpetrators’.

Though we may not agree with how these men found their way into this insidious kind of political stardom, we know that their fall from grace will almost always result in discrediting an entire collective, leaving one’s own political work and sacrifice disregarded by mere association. Even if we wanted to ‘out’ these political men, these ‘progressive’ perpetrators, we are told, time and time again, that it would ‘not be strategic’, or that we need to ‘keep our dirty laundry inside the movement’. In South Africa, these conversations happen not just in student activist spaces but in the spaces of well-funded NGOs, in influential trade unions, in university departments and in the highest public office. Political perpetrators remain protected by hollow progressive sentiment.

My intention with this reflection both at JNU and now is not to lament at my own guilt and indulge my own complicity, nor am I trying to provide any sort of road map or set of instructions on what women should or should not do when faced with the painful betrayal by a comrade. Rather, this writing serves as a process of thinking: a way for me to move away from the scream that sits lodged in my throat towards some kind of processing – a making sense of the timeless burden that political women carry, an ultimatum designed by political men such that we can choose to betray ourselves and our own bodies or betray ‘the cause’.

As I observe the tidal wave of hyper-masculine fascism that is sweeping across the world, the cunning denial of climate change and pending ecological collapse, the rise of right-wing nationalisms and the closing in of borders, I hear the calls for an organised, transnational left to rise from its own ashes. The enemy is clearly marked and more dangerous than before – it is ‘over there’ and proudly announcing itself for the world to see. Of course I am afraid, afraid for the future of the planet, the future battles my body will have to endure, of economic depressions and growing inequalities, wildfires, rising water levels, pro-life policies and for-profit prisons. I am also afraid of all the sacrifices women will have to make in this political battle, the stories they will never tell.

Jessica Breakey is currently doing her PhD in Geography at University College London.