Ireland Has Finally Granted Its Women the Right to Choose

Progress in an orthodox state like Ireland happens slowly, but steadily. 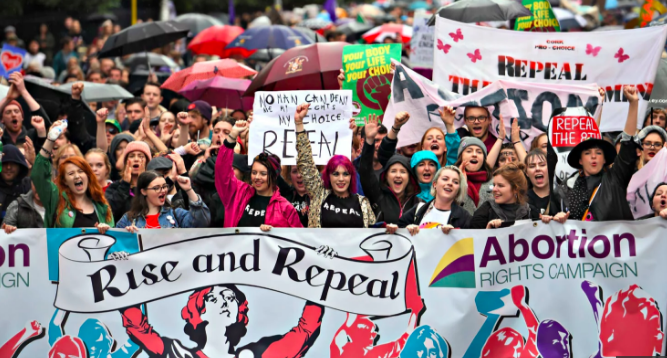 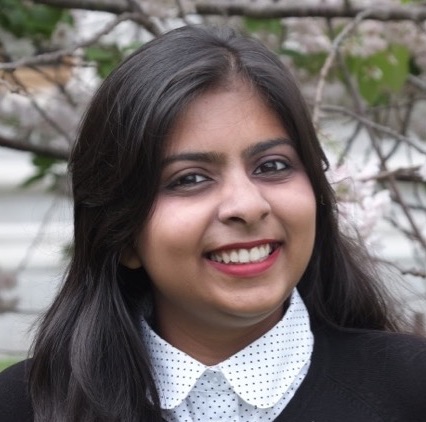 A Dublin resident describes the relationship between women in Ireland and access to abortion as a love story. The story of these two star-crossed lovers came into the limelight in 2012 after the death of an Indian woman in Ireland, Savita Halappanavar.

Halappanavar, residing in Galway, Ireland, was 17 weeks pregnant when she was refused an abortion and eventually died from a cardiac arrest due to a septic miscarriage. Her death led to several protests, both nationally and internationally, calling for a referendum to decide on the legality of abortion in the country, i.e. to repeal the 8th amendment to the Irish constitution.

The protests created a stark divide in the country, with pro-choice supporters, who advocate for the right of women to choose on one end, and pro-life supporters, who advocate the right to life of the unborn foetus, on the other. While the voices on each side were very prominent, the repeal movement took the country by storm, especially when the government led by Prime Minister Leo Varadkar promised a referendum allowing the people to decide on whether access to abortion should be made legal. 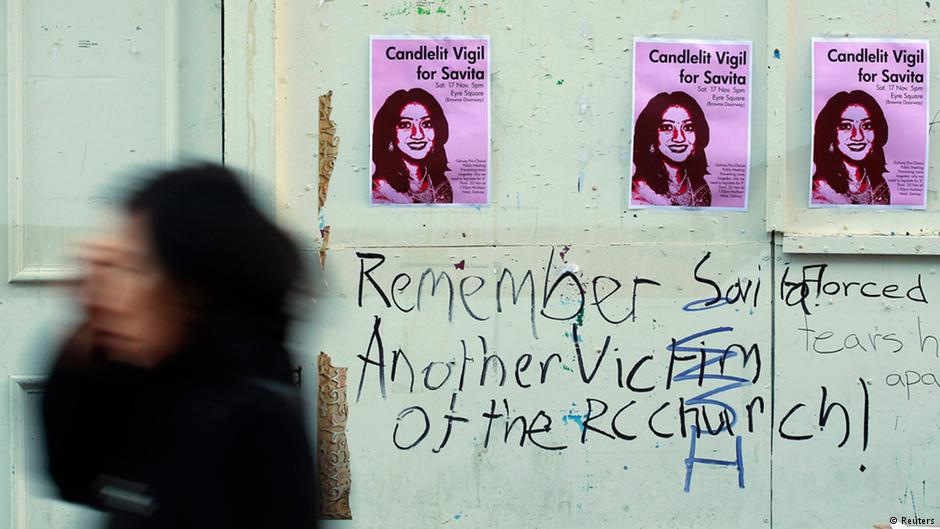 A woman walks past posters advertising a candlelit vigil at the University Hospital Galway in Galway. Credit: Reuters

The repeal movement made a mark on social media, with youth joining in with hashtags of ‘#RepealTheEighth’ and ‘#TogetherForYes’. The vote was held on May 25, and thousands returned to the island from different parts of the world just to cast their ballot.

The country has seen many referendums in the past, the most recent being the one taking a call on same-sex marriages, where Ireland voted ‘Yes’ to allow the same. But this particular referendum caused ripples in Dublin and many other cities of the country. Neighbours fought with neighbours and brothers severed ties because of differences in opinion. The debate on access to abortion hit a raw nerve. One particular pro-life enthusiast votary was seen wearing a placard in Dublin city centre just ahead of the vote reading: “Pro-choice supporters, you should have been aborted.”

These spats were seen all over the country, up until Saturday, when the votes started coming into Dublin Castle. Pro-life supporters conceded as the Irish had spoken – 66.4% voted to repeal the barbaric anti-abortion law, setting the wheels in motion for a new sunny day in a gloomy overcast Ireland.

The law so far

Ireland, being a staunch Catholic state, made abortion illegal in 1861 by passing the Offences Against the Person Act. According to this law, getting an abortion or even helping someone get an abortion was a crime, the punishment for which was imprisonment for up to life. These provisions continued to apply in Ireland till as recent as 2012 until it was superseded by the Protection of Life During Pregnancy Act of 2013 that made it an offence to intentionally destroy unborn human life.

However, an incentive of the later law was that it reflected the wordings of the Irish Supreme Court from the famous X case of 1992 (Attorney General vs X). In the X case, the attorney general was granted an injunction preventing the abortion of a 13-year-old rape victim. The Supreme Court, on appeal, overturned the injunction considering the suicidal risk to the girl’s life. It set a precedent that if the continuation of the pregnancy would be a substantial risk to the mother’s life, both physically and mentally i.e. risk of suicide, a legal abortion could be sort. Sadly enough, this exception did not apply to Halappanavar as the doctors did not identify her sepsis/infection in time or as being life-threatening.

The second and rather the most crucial part of the law that made abortion illegal was the 8th amendment to the constitution of Ireland. This amendment added a new sub-section after section 3 of Article 40:

This subsection shall not limit freedom to travel between the State and another State.

This subsection shall not limit freedom to obtain or make available, in the State. Subject to such conditions as may be laid down by law, information relating to services lawfully available in another State.”

Coupled with the existing laws, this amendment gave the foetus constitutional protection, blatantly disregarding the rights of the mother. The only silver lining to the addition of the sub-sections was the permission to travel to another country to obtain an abortion. However, due to financial reasons, this remedy could not be accessed by several women.

These laws were even criticised by the European Court of Human Rights, which through several judgements insisted the government to rethink their legislation, as it was violating basic rights of equality and freedom of choice.

There is a Bill pending in the Oireachtas (parliament), Thirty Sixth Amendment of the Constitution Bill, 2018, which will replace the 8th amendment with the text: “Provision will be made by law for the regulation of termination of pregnancy.”

Though women in Ireland will not be able to access legal abortion immediately, the days of buying abortion pills online that would potentially harm them further and worrying about travelling to another country are now behind them. They will soon possess the right to choose and access safe abortions.

Progress in an orthodox state like Ireland happens slowly, but steadily. Contraception itself was only legalised in 1980 (and that too, just for those above 18 years). Also, this is a country that sent it’s newly-drafted democratic constitution to the Vatican for approval.

But nevertheless, keeping the religiously motivated decisions of the past aside, this love story got its happy ending. The Emerald Isle is stepping in a new era, filled with hope and promises of safety and equality.

Shonottra Kumar is a Research Fellow for Nyaaya at the Vidhi Centre for Legal Policy.