Which Women Are We Celebrating This Republic Day?

As a woman I cannot but get worried about celebrating exceptional women like Captain Tania Shergill for their extraordinary achievements, especially when the military establishment is involved. 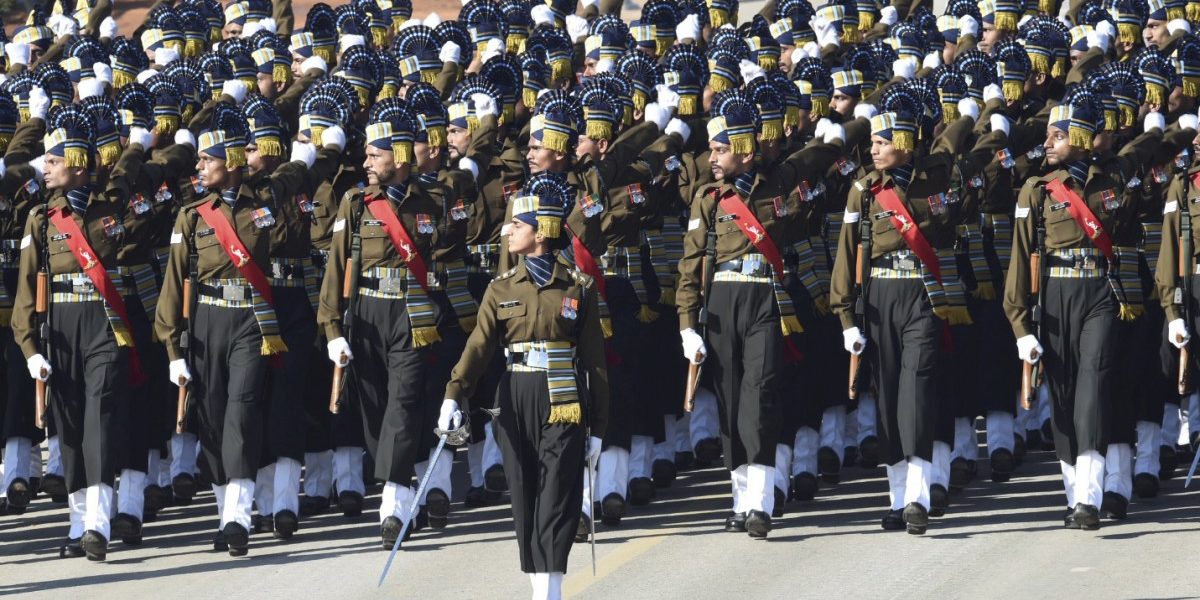 Captain Tania Shergill, the first woman parade adjutant for the Republic Day parade, during the rehearsal on Thursday. Photo: PTI

It is indeed a thing for celebration when young women lead from the front and become creators of their own destiny. We celebrated when women became fighter plane pilots, we will probably celebrate when women will become trained soldiers next year. As a woman I applaud for them because breaking the glass ceiling in the military establishment is an achievement.

However, also, as a woman I cannot but get worried about celebrating exceptional women for their extraordinary achievements, especially when the military establishment is involved. I shall never be able to ‘unsee’ the notorious Abu Ghraib photographs and the smiling young women American soldiers in them. Were those women exceptions? A long report published in The New Yorker on April 30, 2004 says:

“As the international furor grew, senior military officers, and President Bush, insisted that the actions of a few did not reflect the conduct of the military as a whole. Taguba’s report, however, amounts to an unsparing study of collective wrongdoing and the failure of Army leadership at the highest levels.”

The evidence was too much and the cover-up could not brush all of them under the carpet.

If somebody wants to quell my fear by saying that ‘Indian women’ soldiers would never become such monsters, I have to tell them that I cannot ‘unsee’ the Manipur mothers’ naked protest and that it is the same military establishment where bright Indian women will become soldiers. Would you not worry if your daughter or niece or sister is about to join a profession where rape, murder and torture go unpunished for decades?

Also read: Flag This Extraordinary Moment—A Symbol of Power Has Become a Totem Of Resistance

One may still want to allay my worries by arguing – why single out the military establishment as such a professional sector? Journalism, film industry, medicine, academia, corporate sector – everywhere such impunity exists for people with power, influence and money. We cannot forget Dr Payal Tadvi or Fathima Latheef and cannot ignore the #MeToo moments in the Indian journalism and entertainment industry that shook the complacency of male privilege. Well, in that case the response is not much of a comfort, is it?

Our country’s constitution makes it a democracy and a republic – where the leaders are chosen by the citizens and the power rests with the citizens, not the leaders who run the state. My fears are that the citizens are losing the right to disagree with the state. And it is the woman citizen who is often at the centre of this crisis. This Republic Day, I would like to express my fears and unfortunately I find too many examples that sustain my fears.

Have we forgotten Gauri Lankesh? Assailants on a motorbike gunned her down at her own doorstep in Bengaluru on September 5, 2017. There were protests and candle-light vigils for her across the country, her writings became available as a collection, and her work had been posthumously granted the Anna Politkovskaya Award, named in honour of a Russian journalist who was assassinated in Moscow in 2006. She was a vociferous critique of the present government and wrote relentlessly in her Kannada language weekly Gauri Lankesh Patrike against Hindu right-wing politics in India.

Why did Gauri Lankesh become such a threat to the Hindu right-wing? She was a journalist and ran a weekly but the circulation of Gauri Lankesh Patrike was not more than a few thousand. She participated in protest movements, but those movements are not only legal in a democracy but considered the right of all citizens. She directed her sharpest criticisms at the elected government of her country, but with freedom of speech, one more right guaranteed by our constitution, citizens have the right to express their disagreements with the government.

It is also important to remember that Lankesh often became a successful bridge amongst Dalits, left-wing activists, women and Adivasis who could share their activism against rising Hindutva politics. But are these reasons enough to open fire on her? For the Hindu right-wing, these were not only enough reasons for her murder, but her death was also celebrated by the Hindutva supporters on social media. Maligning a murdered citizen, whose only crime was to raise her voice against divisive politics, points towards a deep-seated malady that ails our republic and we need to be worried about it.

I sincerely hope that we have not forgotten Sudha Bharadwaj. Kalpana Dutt, an accused in the Chittagong Armoury Raid case in 1930, wrote in her autobiography that the most demoralising effect for a political prisoner is fading from public memory. The ray of hope is perhaps Bharadwaj’s honour at the Harvard Law International Women’s Day Portrait Exhibit in 2019 along with 20 other women, where her work is recognised as part of “astounding contributions of women around the world to the areas of law of policy”, based on nomination by students, faculty or staff of Harvard Law School. In her long career as a lawyer-activist, Bharadwaj has been working with the under-privileged for nearly three decades in Chattisgarh.

Bharadwaj has been in jail since October 2018 and was under house arrest since August 2018. She got temporary bail in April 2019 to attend her father’s funeral but in October 2019 her bail plea was rejected by the Bombay high court. The police have produced scant evidence to support her arrest under the Unlawful Activities (Prevention) Act, and could not establish direct links between Bharadwaj and any banned political organisation. In a September 6, 2019 news report published in News18 one gets to read:

“The police, in their affidavit opposing bail to Bharadwaj, had also accused her of having formed an “anti-fascist front” along with some of the co-accused in the case, he [Bharadwaj’s lawyer Yug Chaudhry] said.

The police had alleged that through this front, Bharadwaj and others planned to “topple the democratically elected government, assassinate political figures and threaten the unity, integrity and sovereignty of India”, but none of the six documents suggested such conspiracies, Chaudhry said.”

It is difficult to believe that those who want to topple a democratically elected government through conspiracy and violence would name their organisation as ‘anti-fascist’. This is perhaps the darkest irony for any sovereign democratic republic. The only time in history when citizens had to face the wrath of the state for being anti-fascist was in Benito Mussolini’s Italy. One can also include in the historical chronology Hitler’s Germany and the United States of America under McCarthyism. The Wikipedia entry for McCarthyism states that it “is the practice of making accusations of subversion or treason without proper regard for evidence.”

Regard for evidence compounds my fears. Mere reading of actor-activist Sadaf Jafar’s experiences in police custody in Lucknow after she was arrested on December 19, 2019 for protest against the Citizenship (Amendment) Act is enough to understand what the Hindu rashtra can do to Muslims. Jafar said that she felt abused, even more than repeated beatings, by the way police addressed her as ‘tum log’ and Pakistani.

In an interview with Outlook on January 15, 2020, after Jafar got bail, she said, “At the police station, one female constable pulled my hair, slapped me and scratched my face. None of the police officers, from constable to seniors, wore badges on their uniform.” The nameless Hindutva has decided to take over the citizenship rights from Muslims – from those Muslims who chose to live in a secular country over migrating to an Islamic state.

Too many faces crowd my nightmares these days. I shiver with horror when the religious affiliation of survivors of rape and victims of rape and murder become more important than the crime itself. I feel traumatised when talk-show hosts on television channels burst their lungs in support of war with our neighbouring country, completely forgetting the rising cost of food, farmers’ suicides, joblessness and closing of public sector units. And now with the Citizenship (Amendment) Act, when the Hindu right-wing gleefully wants to erase ‘termites’ from the framework of nation state, I have decided to join the people on the streets to exorcise my nightmares. On the streets I have millions of fellow travellers who are equally trying to wake up from the nightmares that surround our everyday lives.

Women protesting the CAA through sit-ins at more than 40 sites across India, especially the women of Shaheen Bagh, have emerged as icons. They are not exceptional women, but their very ordinary-ness is their strength. The ordinary right of ordinary women citizens to remain citizens has become a movement. I request Captain Tania Shergill and Captain Bhavna Kasturi to come to Shaheen Bagh. Please meet the citizens you are defending. You shall lead the Republic Day parade in front of the privileged few of this country, but behind them lives the citizen of India. Please defend citizenship rights of all women in India and the people they care for.