India Ranks 135th Out of 146 Countries for Gender Parity, Worst for 'Health and Survival': Report

The WEF's annual Gender Gap Report said that the cost of living crisis is expected to hit women hardest globally with a widening gender gap in the labour force.

'South Asia (62.3%) has the largest gender gap of all regions, with low scores across all measured gender gaps and little progress made in most countries since 2021.' Photo: Sophie Burie/Flickr (CC BY-NC-ND 2.0)

New Delhi: India has ranked low – at 135th place out of 146 countries – in terms of gender parity, on the annual Gender Gap Report 2022 of the World Economic Forum (WEF) released in Geneva on July 13.

Only 11 countries are ranked below India on the index of 146 nations – Afghanistan, Pakistan, Congo, Iran and Chad.

Iceland retained its place as the world’s most gender-equal country, followed by Finland, Norway, New Zealand and Sweden.

The WEF report said that the cost of living crisis is expected to hit women hardest globally with a widening gender gap in the labour force. It will take another 132 years (compared to 136 in 2021) to close the gender gap.

The report further said that COVID-19 has set gender parity back by a generation and a weak recovery was making it worse globally.

On India, the WEF said its gender gap score recorded its seventh-highest level in the last 16 years, but it continues to rank among the worst performers on various parameters. 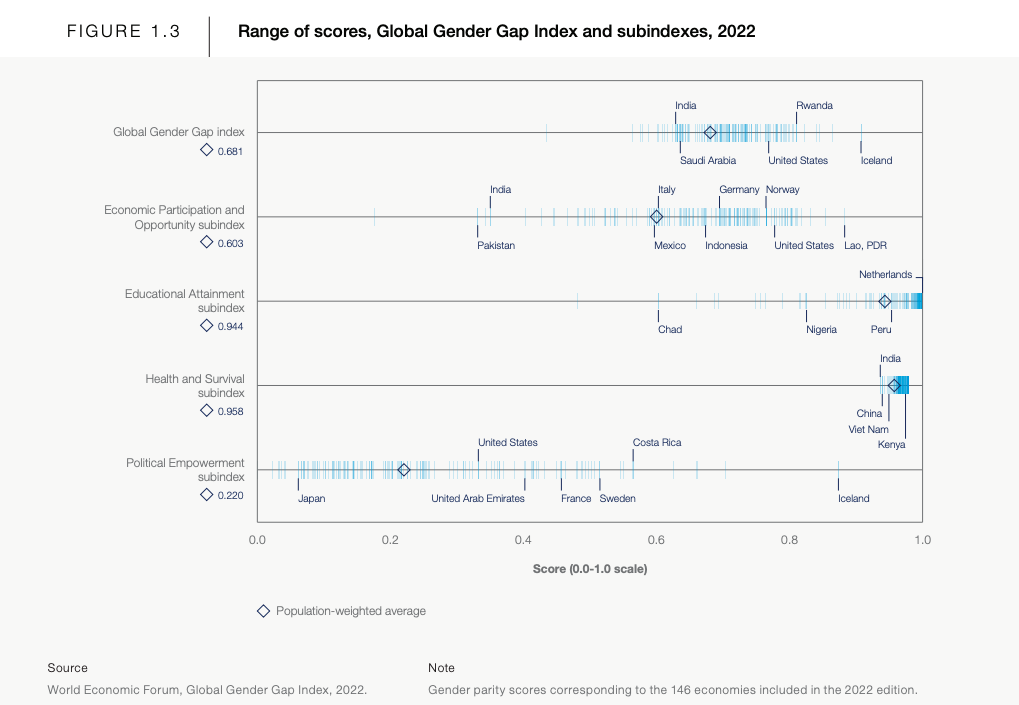 “With a female population of approximately 662 million, India’s level of attainment weighs heavily on regional rankings,” it said.

The gender parity score for estimated earned income improved; while values for both men and women diminished, they declined more for men.

However, in the area of political empowerment, the subindex where India ranks relatively higher at 48th place, showed a declining score due to the diminishing share of years women have served as head of state for the past 50 years.

On the health and survival subindex, India ranked the lowest at 146th place and figured among the five countries with gender gaps larger than 5%, the other four being Qatar, Pakistan, Azerbaijan and China.

South Asia (62.3%) has the largest gender gap of all regions, with low scores across all measured gender gaps and little progress made in most countries since 2021. 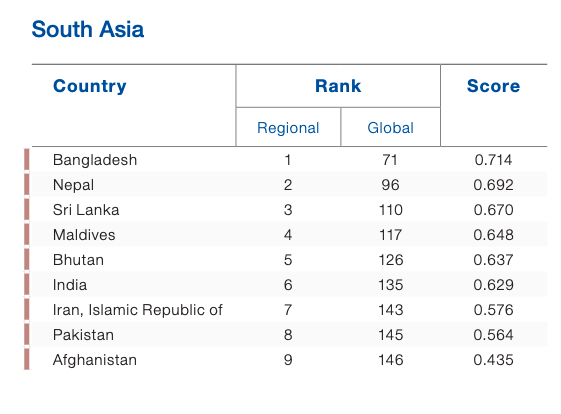 At its current pace, it will take 197 years to close the gender gap in the region. The economic gender gap has closed by 1.8% with increases in the share of women in professional and technical roles in countries including Bangladesh and India as well as Nepal.

The WEF said that of the 146 economies surveyed, just one in five has managed to close the gender gap by at least 1% in the past year.

Also read: The Winners and the Losers of Union Budget 2022

“The cost of living crisis is impacting women disproportionately after the shock of labour market losses during the pandemic and the continued inadequacy of care infrastructure,” WEF Managing Director Saadia Zahidi said.

“In face of a weak recovery, government and business must make two sets of efforts: targeted policies to support women’s return to the workforce and women’s talent development in the industries of the future. Otherwise, we risk eroding the gains of the last decades permanently and losing out on the future economic returns of diversity,” she added.

At the current rates of progress, it will take 155 years to close the political empowerment gender gap – 11 more than predicted in 2021 – and 151 years for the economic participation and opportunity gender gap.

Although 29 countries have reached full parity, it will still take 22 years to close the educational attainment gender gap.

And while more than 140 countries have closed at least 95% of their health gaps, overall backsliding in health and survival means there may be a reversal.