Even after sharing their ordeals against their violators – most of whom were powerful and influential public figures – during the #metoo campaign, none of them had filed criminal cases against the abusers. Here follows an analysis of how sexual assault trials are delayed in India. 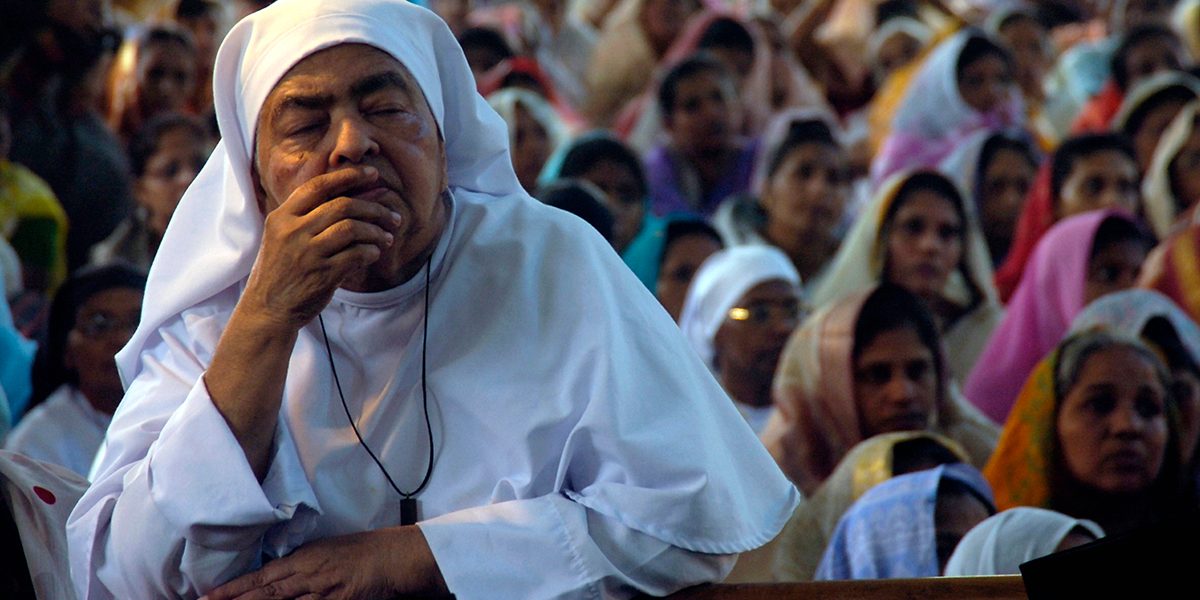 A nun prays during a silent protest in Kottayam town of Kerala. Representative image. Credit: Reuters/Dipak

Two years after the 44-year-old nun, a mother superior belonging to the Missionaries of Jesus congregation functioning under the authority of the Bishop of Jalandhar, made history by filing a criminal case of rape and sexual abuse against the then Bishop of Jalandhar, Franco Mulakkal, she appeared in the Kottayam district and sessions court earlier this week to record her evidence.

The examination-in-chief of the survivor was completed on Friday, and the next cross examination is scheduled on October 1.

Though rape trials are generally held in-camera to protect the privacy of the victim, in this case, an order has been passed on an application made by the accused bishop restraining the media from reporting about what transpires during the trial to avoid trial by media which might prove to be a threat to a fair trial.

While this is the date the complainant must have been waiting for, most anxiously, ironically this is also the date she would be dreading the most, having to stand in the witness box and field questions from an astute criminal lawyer, most of which would revolve around slandering her moral character.

The lawyer will certainly use all his cross examination skills to “break the witness” as this process is popularly referred to, where the witness in the box is provoked to an extent that she gets angry, loses her concentration and falters. Here’s praying that she retains her cool throughout this ordeal and deposes with a quiet confidence even when baseless allegations against her moral character are hurled at her.

In the past we have noticed during the “#MeToo” campaign which broke out in India in 2017, after the Harvey Weinstein episode using the #MeToo hashtag on social media, several seemingly confident and highly successful women came out on social media and shared the manner in which their well-reputed bosses or superiors, most of whom were powerful and influential public figures, had made sexual advances towards them or had sexually molested them.

Yet none of them had filed criminal cases against the abusers. The one criminal case that was filed by Tanushree Dutta against Nana Patekar regarding an incident which had occurred several years earlier, was dismissed for lack of evidence.

The only person who was made to pay a price of relinquishing the public office he held as minister of state for external affairs – M.J. Akbar. But even he did not take it lying down and filed a defamation charge against the journalist Priya Ramani, who had first come out with the allegations of sexual harassment against him.

Similarly, an employee of the Supreme Court who had made allegations against the then Chief Justice of India, Ranjan Gogoi, was subjected to public humiliation. She and her brother-in-law were both dismissed from service and an ad hoc committee of the court comprising three judges which inquired into the matter dismissed the complaint as unfounded and gave a clean chit to Gogoi.

The manner in which the inquiry was conducted met with public criticism for being one sided, unfair and opaque.

An extreme case in this category is the one in Uttar Pradesh, popularly known as the Unnao rape case, where a 17-year-old had accused a sitting MLA, Kuldeep Singh Sengar and his associates of gang rape. Due to the influence he wielded, the police did not register a case until she threatened to immolate herself outside the residence of the chief minister of Uttar Pradesh, Yogi Adityanath.

Though the MLA was dismissed from the BJP and had to step down from his position as an MLA and was convicted with life imprisonment on the charge of gang rape, the case ended with disastrous consequences not only to the victim but also to her entire family. Her father was arrested on a false case and died while in police custody, and it brought little solace to the victim that Sengar was convicted with 10 years of imprisonment for this offence.

Later, the vehicle in which she was travelling was hit by a truck, and she lost one of her aunts and herself suffered serious injuries.

Finally when she was on her way to attend the court hearing, she was set on fire by some of the accused who had secured bail. With her body on fire, she had to run for a kilometer, before someone offered her help. She was airlifted and taken to the Safdarjung hospital in Delhi where she succumbed to her injuries the next day.

The rape trial was transferred to Delhi from Unnao and the court finally convicted the expelled BJP MLA of culpable homicide not amounting to murder for causing the death of the victim’s father.

The more influential the accused, the more life threatening it becomes for the victim to follow up on the legal case. It requires a great deal of grit and determination to withstand the trauma of an impending criminal trial. There is always a heavy price to pay.

All those who ask the victim, who has stated in her complaint that the Bishop raped her 13 times from 2014 over a period of two years, why she did not file a complaint when he raped her the first time, need to know the fear and anxiety the victim needs to overcome before approaching the police.

One wonders whether she was aware of the consequences which would befall her after filing the complaint. It was only because of the support she received from her five companions and the Save Our Sisters (SOS) movement which came forward to support her that she could carry on. Due to the various threats she had received from the Bishop’s support to withdraw her complaint, she has been given police protection.

Initially due to pressure ‘from above’ the police dragged their feet and did not arrest the accused. In September 2018, Father Augustine Vattoli, the convener of the SOS movement, organised a fortnight-long protest at Vanchi Square near the high court in Kochi, demanding immediate arrest of Franco Mulakkal, which received support from nuns, priests and the general public.

The sight of the nuns sitting on a dharna in public made national headlines and due to the pressure it created, the Kerala police finally went to Jalandhar and after rigorous interrogation of the Bishop over three days, arrested him on September 21, 2018. 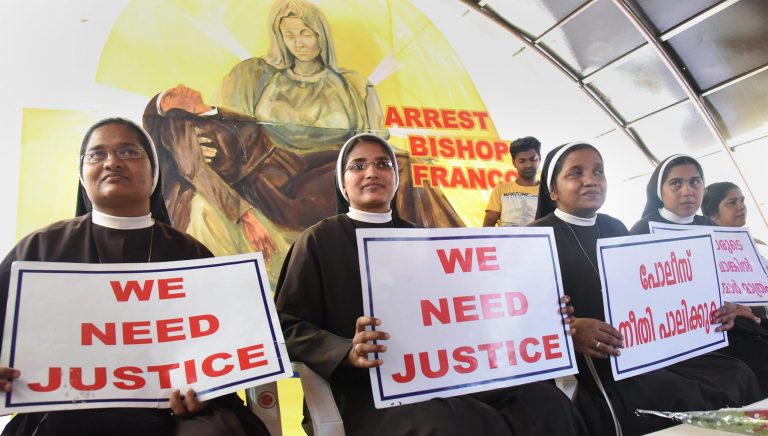 Nuns protest against the delay in action on Bishop Franco Mulakkal. Credit: PTI

But the public protest mounted opposition against her. The congregation to which she belonged lent complete support to the bishop, under whose authority they function. At his instant, they conducted an ‘internal enquiry’ and brought out a report that when the favours that she had demanded were not acceded to, she had filed a case of rape as part of a conspiracy to defame him.

She was also accused of having an affair with a local rickshaw driver and a sexual relationship with the husband of a relative.

Just as she was mustering up her courage to make a public statement, a sitting MLA P.C. George called her a prostitute which threw her completely off gear and she lost her confidence. She went into acute depression and needed to go through counseling therapy.

The MLA’s comments came despite the Kerala high court judgment dated August 13, 2018, in a writ petition filed by the Kerala Catholic Church Reformation Movement (KCCRM) that the church authorities should refrain from making any derogative comments against the rape victim.

The victim and the five nuns who had lent her support faced total ostracisation from their own congregation. They were taken off from all their religious and pastoral duties. They had nothing to do. They received a paltry sum of Rs 500 for their personal expenses, got their meals from the canteen at the home for the aged which the congregation ran and could get their medicines from the pharmacy attached to it. 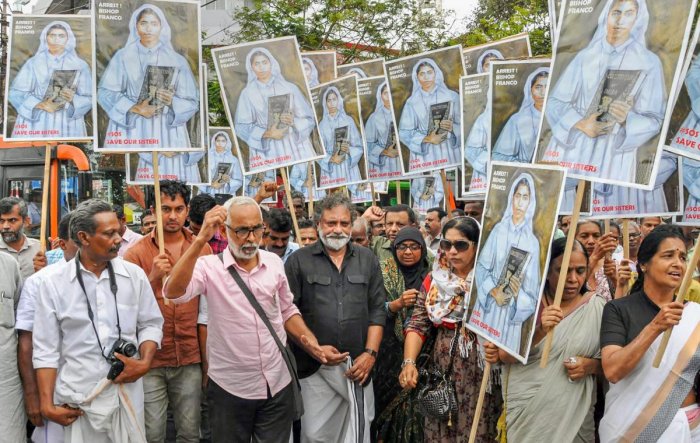 Later there were attempts to isolate the victim from her supporters by transferring them to convents in far off places like Orissa, Jharkhand and Delhi. But the nuns refused to leave the convent situated in Kuravilangad in Kottayam where the incidents of rape had taken place.

While she faced isolation and humiliation, the local community lent their support to the Bishop. When he was finally arrested on September 21, 2018, the sympathies of the entire congregation were with him. Though the trial court rejected his bail application, he moved the high court and secured bail and was released after spending 25 days in police custody. He returned to the Bishop’s house in Jalandhar as a triumphant king with all pomp and glory and was welcomed with rose petals.

The trial was scheduled to start on December 1, 2019, but on that day the case was adjourned and it was posted for the end of December 2019. Again it was adjourned to January 2020 as the accused failed to appear. Thereafter, he made this a routine, and did not attend court hearings for the next 19 consecutive dates.

He sought adjournment on the ground that he was tested COVID-19 positive, and in the meanwhile approached the Supreme Court. On the next date when he again failed to appear in court, his bail was cancelled and an arrest warrant was issued.

For the first time he appeared in ordinary civilian dress and not in the ceremonial attire of a Roman Catholic bishop. The fact that no one is above the law, seems to have finally dawned on him.

It will be interesting to follow how this case proceeds from here. The complainant and her supporters maintain that they have full faith in the judiciary, as the civil courts have given her the dignity which the religious order of the Roman Catholic Church had denied her.

She is a path breaker who has made history in the Catholic Church, and hopefully several others facing a similar situation will now have the courage to walk through this hazardous journey of securing justice.

Flavia Agnes is a lawyer and founder of a Mumbai-based NGO Majlils which provides socio-legal support to victims of sexual and domestic violence. She can be contacted at flaviaagnes@gmail.com.