A number of women have accused the TMC of overseeing the horror of sexual assault in the post-poll violence that ravaged the state. 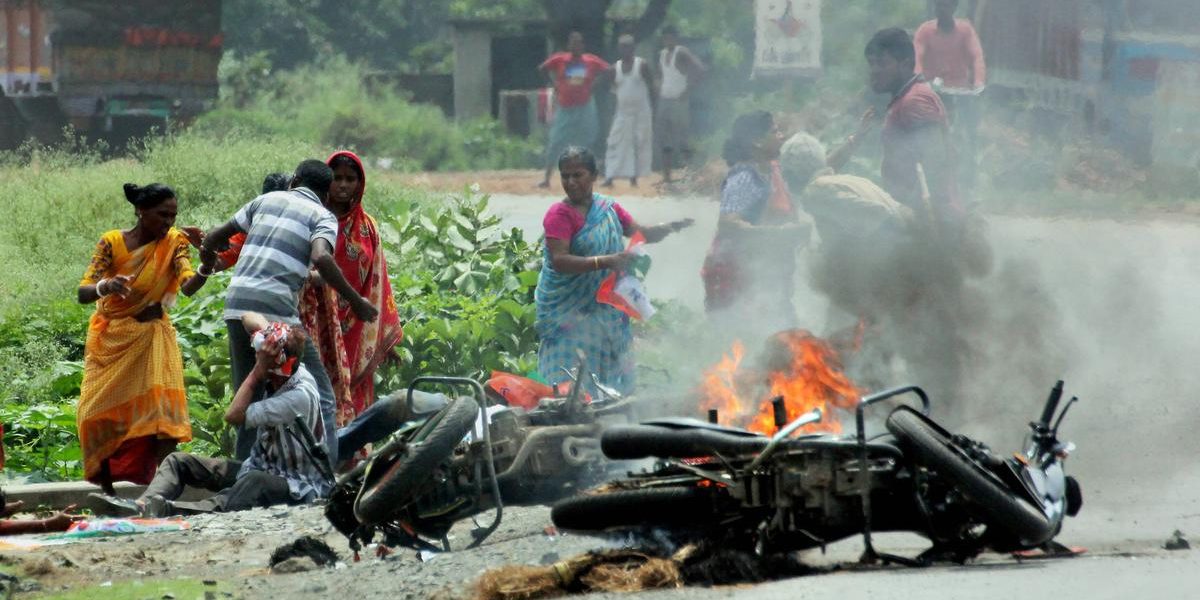 On May 2, Bengal chose Banglar nijer meye (Bengal’s own daughter) for the third time to take up the reins of the state government. The vulnerable image of Mamata Banerjee in a wheelchair made voters forgive the TMC’s strew of wrongdoings in the last five years, especially awakening the tigress in Bengali women voters as they came together to keep out the bohiragatos (outsiders) and protect her from their misogynist attacks. Colourful posters celebrating a woman’s courage and victory over Delhi-based masculine leadership were shared on social media after the massive mandate. It was expected that, finally, peace would come to the pandemic ravaged state that had gone through a long-drawn, eight-phase election. But did that happen? At least not in the rural districts far away from Kolkata’s critical eyes.

Bengal’s disturbing legacy of post-poll violence showed its macabre face once again and this time women bore the brunt of the violence in the worst possible way. Some of the disturbing incidents that trickled out via social media were declared ‘fake’ by the West Bengal Police or normalised as part of the post-election process. But voices kept floating and some managed to reach the Supreme Court. Those voices that were not heard by the local police. Denied justice in their home state, two gang-rape victims – a 60-year old and a 17-year old minor – moved the apex court earlier this month demanding a special investigation.

Also read: Amidst Reports of Deaths in Post-Poll Violence in West Bengal, Banerjee Appeals for Peace

Raakhi Mitra, the West Bengal state secretary, Mahila Morcha, BJP said that she spends sleepless nights because of the number of calls she gets from all over Bengal.

“Phone calls started pouring in the day the results were announced from Midnapore, Burdwan, and Murshidabad about how violence had been unleashed against BJP karyakartas. And then the molestation and rape allegations started coming in from Nandigram, from Minarkhan and Hingalgunj.”

Rini Das (not her real name), a resident of Canning East and an officeholder in the Mahila Morcha, the women’s wing of the BJP,  had to leave home on April 8 after 40 TMC workers showed up at her house, physically assaulted her and her mother with shoes and sticks, and warned her that she will be raped for her  support to the BJP. Her house was locked and she was asked to pay a visit to the local TMC party office to retrieve the keys that evening if she wanted to continue living in Canning. She ran away to Kolkata that evening with her mother.

She shared a screenshot of her FIR and stated over the phone, “My father went to the Jibantala Police Station where he was advised to leave town for a few days since the police would not be able to give the family protection.” It has been over two months and Rini has still not been able to return home.

Asked to comment on harrowing details of gang rape published The Times of India, Debangshu Bhattacharya, TMC spokesperson and general secretary of the party’s youth wing, told this writer, “I have heard of some allegations but those few cases happened when the Election Commission was in charge of Bengal. After Mamata Banerjee was sworn in, all that stopped. Ninety percent of these allegations you read about are false. This is a part of the BJP’s conspiracy to spread fake news and bring president’s rule in Bengal.”

When asked about whether the TMC high command was going to carry out a party investigation since these allegations are reaching the apex court, he said, “The TMC has a decentralised leadership. These are local matters so, our local leaders will look into it.”

Following the Calcutta high court’s refusal to recall its June 18 order directing the National Human Rights Commission (NHRC) to constitute a committee to examine all cases of alleged human rights violation during post-poll violence, more victims are sharing their stories, many among whom have been sexually assaulted.

Right after the assembly results were announced, Rekha Sharma, the National Commission for Women (NCW) chairperson, had visited Bengal to investigate the post-poll violence in Bengal against women.

She said, “We have talked to women in shelter homes who were molested and raped and they were not able to report it because the local police would not take their FIRs. We have heard of as many as 60 such complaints.” She is hopeful that now with the NHRC sending in a team, more women will open up about the atrocities against them.

CPI (ML) leader Abhijit Mazumdar was not surprised when he read about this in a national newspaper. “This is nothing new in Bengal. During the panchayat elections in 2018, the TMC carried out the same kind of mayhem. Those reports never came out but this time the news has reached the Supreme Court. The high court has also taken cognisance and referred it to the NHRC. We have tried to raise the issue but are also skeptical about putting our trust in Union government agencies. The situation is so politicised that I am afraid that the victims might not get justice from either state or Union government agencies.”

Post-poll violence has touched his party workers too but in a much smaller proportion compared to the BJP’s. Mazumdar said TMC supporters attacked the CPI(ML)  party office at Budge Budge in South 24 Paraganas. “The ground-level miscreants have taken over and TMC has no control over them.”

Adhir Ranjan Chowdhury, leader of the Congress party in the Lok Sabha and MP from Berhampore, denounced the violence.

“In 2016, this kind of attack was against Congress, and this time it’s against BJP. Either way in the post-poll political vendetta, it is the women who suffer the most in Bengal,” he said.

When asked why there have been no reports in the regional newspapers about these atrocities, he observed that the newspapers are fearful for their safety. “How can the local journalists report anything about this when the police forces can’t offer them protection? Even civil society has been politicised like the police force. This break down of law and order is hurting the reputation of the state in the eyes of the entire nation.”

The questions that stare at us now are: Has the law and order in Bengal broken down so completely that rape victims have to seek justice outside the state? The violence against women in Bengal is not just a political issue anymore, it has become a broader human rights issue right now. Is Bengal, which is led by a woman chief minister and boasts of having the largest number of women MLAs in a state assembly, willing to acknowledge this? Is Bengali civil society ready to start a campaign against it?

It is time the people of Bengal, who denounce atrocities against women all over the world, take cognisance of what is happening in their own backyard and demand accountability from the government they voted for.