How the Jahangirpuri Demolition Destroyed Lives of India's Poorest Women

The worst victims of MCD's targeted demolition have been women, whose assets of subsistence survival were bulldozed.

Women from Delhi's Jahangirpuri, where MCD carried out demolition on April 20 in the aftermath of communal clashes locally. Photo: Farah Naqvi.

“If it wasn’t for us Delhi would be buried under its own garbage!” The words burst from Zahura Bibi (42) and Taslima (30) with the righteous fury of the wronged. The anger was fresh. And words came tumbling out one over the other, like an avalanche. We spoke to over 40 women, sometimes in twos and threes, sometimes in large groups, in a narrow gali (lane) inside Block C, Jahangirpuri, shifting in swarms from stoop to shady stoop each time the afternoon sun found us. It was two days after the Municipal Corporation of Delhi’s demolition drive of April 20.

The women seemed to speak all at once, like a stream of consciousness, like there was little time in which to tell so much. They spoke of the damaged masjid. The untouched mandir. “Would we ever try and put our flag on a mandir? Never!”  Of the demolition. The police detention of their men – brothers, husbands, brothers-in-law. The men who have not come home since then, because they are fearful of arbitrary arrests. The women spoke of the calm in their gali (lane) before this storm. The absence of any animosity with the Hindu families in their galis. Their shaky existence doing kabaadi work. “And then they dare to call us…What do they call us…?”

For the first time since her deluge of pain overwhelmed us, Zahura paused mid-sentence, and looked around, searching for the word. I offered – “Rohingyas?”

“Yes Rohingyas!” The deluge re-started … “Aur Bangladeshi bhi boltey hai. Arrey Paschim Bangal is in India. We came from there to earn a living. Picking and clearing your garbage. We work hard. To support our families…. See the rented cubby holes where we live. I was born here. My mother was born here. How dare they!”

Most of the women came originally from West Midnapore (many just say Haldia, the famous port town, as an easy reference). Some were from 24 Parganas. Others from Murshidabad. Some date their history in Delhi back three generations. Most families have been here in Jahangirpuri for 40 years. They all spoke fluent Hindustani.

The worst victims of MCD’s targeted demolition have been women. The poorest of India’s urban working class – the working women. The bulldozers directly hit women where it hurt most – at small assets of subsistence survival. Each woman we met has lost her means of livelihood.

A wilful destruction of livelihoods

These women’s stories are not about the shops or homes that were mowed down. These stories are not even about the hypocrisy of a city that thrives on unauthorised construction (check out the latest Romanesque balcony of RWA Uncle next door). Or, the quite meaningless analogy – ‘Why not demolish affluent Sainik Farms?’  This is about the wilful destruction of the hand carts and cycle carts on which rag pickers of Jahangirpuri piled their bags of garbage to then transport, sort and sell through kabaadi shops; it is about the fruit stalls, gumtis (kiosks), and the wooden ‘shop’ tables of India’s poorest women.

It is about 35-year-old Manwari Bibi’s impending destitution. 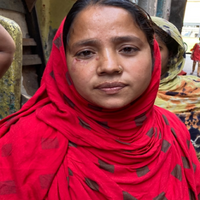 All three of Manwari Bibi’s wooden ‘shop’ takhats were crushed by the bulldozer. Photo: Farah Naqvi.

Because the mighty bulldozer found time, with everything else of such import it must have had on its mind, to destroy her three wooden tables. On these low takhats, placed adjacently, Manwari Bibi, better known as ‘Monnu’ to all in her gali, would spread her discounted ware – surf, pampers, toothpaste, chips, soaps, huggies, harpic and more. Bought in bulk and sold cheaply. Her husband earns too little from rag-picking. So, Monnu’s average daily earning of Rs 300 is what kept hunger at bay for her family of five. Along with her tables, goods worth thousands have been destroyed. In this month of Ramzaan, many fasts have been broken with just water, she tells us.

A majority of the women here work in the kabaadi chain – rag-picking, sorting or selling. They collect waste from nearby colonies, transport it, sort it and pack the sorted waste in separate boris (gunny sacks) which are kept outside, with each owner’s initial, on the side of the main street. Each bori was worth Rs 500 to Rs 1,000 according to the women. 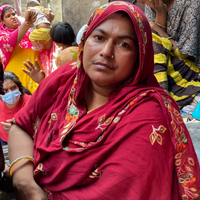 Many of them are the sole breadwinners for their families. Many are widows, like 40-year-old Sakina Beva.

She is a waste-sorter, sifting the usable/recyclable from the ‘real’ garbage. A day of sorting waste earns Rs 200, with lunch thrown in. Without lunch, it’s Rs. 250. With this daily income, she looked after her two unemployed sons.

Her 18-year-old married daughter, Noorjehan and one-year-old grandson moved in recently, because Noorjehan’s husband was picked up by the police after the Shobha Yatra violence on April 16. Four days later on April 20 Sakina’s source of earning was bulldozed. 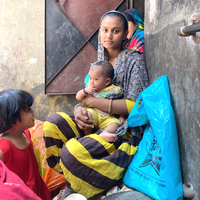 18-year-old Noorjehan has turned to her widowed mother Sakina for support. Noorjehan’s husband was picked up by the police. Photo: Farah Naqvi.

Sakina was often employed by her neighbour Manjura Bibi for daily wages. Manjura had climbed up the kabaadi supply chain, and was the proud owner of two thelas (cycle carts) on which she, with her husband and son, carried sacks of waste, and then hired women like Sakina to sift and sort. Now both thelas, along with their contents – 10 boris of painstakingly sorted garbage – have been reduced to MCD’s rubble.

Women’s stories of devastation were ceaseless; each tale ending with one word –’bulldozed’.

Hafiza Bibi, collected waste from Mukherji Nagar on her thela. The thela was bulldozed. Rojina also got waste from the same place – Mukherji Nagar.  She had gathered four boris by the morning of April 20 – each of them was crushed. Nineteen-year-old old Nargis had a thela – it was bulldozed. Samvara Bibi, 38, lost all her boris of waste. Akhtari Begum’s one thela and 20 boris were bulldozed. Hasina Bibi’s thela, on which she and her husband collected waste, was bulldozed. They have now rented a thela. Of their daily earnings of Rs 250-300, half (Rs 150) will go on renting the thela.

Waheedan Beva (50) lost her thela and four boris, and her 25-year-old son was also picked up by the police two days after the ‘riot’ near the mosque. Hasnu (31) used to go to Pitampura with her 17-year-old son to collect waste.  Her husband is disabled and she is the only breadwinner supporting four children. Her thela was broken, and will have to be repaired before she can use it again.

Zulekha Bibi (35), a mother of four, ran a small shop of plastic kabaad. Her shop was broken and several boris with recycled plastic were taken.  Each bori was worth Rs 500-600 of usable waste. Maheema Beva (32) operated a cycle thela to collect kabaad, making Rs 400-500 a day, to feed her four young children and send two of them to school. She had stocked up on eight boris. Selling these meant being able to buy new Eid clothes for the kids. Now the thela and the boris are all crushed.

What kind of civic body ‘demolishes’ movable thelas (hand carts and cycle carts) of struggling widows? And humble bags of waste that represent a few weeks of subsistence money for a ragpicker family?

Jahangirpuri is not unauthorised. It is a resettlement colony – a space given by the state to resettle its residents. The women and their parents and grandparents who live in Jahangirpuri today were evicted from JJ colonies like the Yamuna Pushta in the 1970s and settled here. They were always informal workers, many doing kabaadi work, and most of them still are. It is entirely unclear why parking thelas to pursue their trade constitutes encroachment?

In defence of its wanton demolition drive without any notice, the MCD in public communication and the Solicitor General in the Supreme Court have been citing The Delhi Municipal Corporation Act, 1957 (DMC Act). This is to the exclusion of several other legal instruments and precedents that mandate prior notice, including the DUSIB Act, 2010 and policy 2015, as well as the Delhi high court decision in Sudama Singh, 2010 among others.

But even going by the DMC Act alone, there are not only sections (Sections 441-444) on giving notice but specific sections (Sections 322, 326) on the power of the Commissioner to arrange removal of movable assets and items of sale. There is no legal mandate for any civic authority to destroy, damage or bulldoze such items.

Twenty-four-year-old Sabina, with her six-year-old daughter Kuhu clinging to her salwar, tells us how it went down.

24-year-old Sabina, whose fruit thela was crushed, explains what happened on April 20, the day of demolition. Photo: Farah Naqvi.

“We were fast asleep after Fajr namaz when they started bulldozing around 10 am. Then we ran out but could only watch helplessly like caged creatures, from behind the gates of the gali that were locked by the police, as they destroyed our livelihoods.”

Sakina’s husband has not returned home since that morning, from fear. Her thela, selling bananas and tarbooz (watermelon) has been destroyed. They were all assured by the local police that nothing will happen to their things. When some of the more assertive women tried to demand a demolition notice from the police, they were simply pushed aside.

With existence on a perennial precipice, Sabina (the day we met) had decided to, desperately, live a little. Her two little girls, aged six and eight, were insisting on Ammi (mother) getting meat cooked for Iftar dinner, she said.So, she must say her goodbyes and rush to buy some. “How will you afford it?” We ask.

Meat is selling for Rs 250 a kilo here, women tell us. Sabina falls silent, and looks down uncertainly, but another woman reveals the source of the secret stash – “Arrey auraton ne jo chhupa ke rakha tha, sab nikal raha hai! (The little bits of money that women typically hide to meet their own occasional needs or emergency needs of their children; money kept away from the grasping men of the house, that is all coming out now). When on the precipice, each moment of joy and indulging your children counts. It is a familiar feeling for these women.

Sakina, Zahura, Monnu, Sabina, Hafiza, Zulekha, … are the names, faces and lives behind the statistics of India’s informal economy, which provides 81.8% of women’s employment. A February 2021 report on ‘Women in the Indian Informal Economy‘ tells us that every nine out of 10 Muslim workers earn employment in the informal economy and more Muslim women, compared to Hindu and ‘others’ earn their livelihoods in this space. This economy is where women are inevitably stuck in the lowest, most precarious jobs. 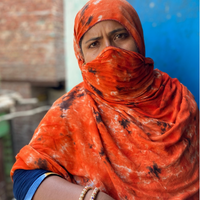 Women in waste picking, street vending, domestic work, and construction have already suffered the highest decline in employment during the pandemic and lockdowns. They could do without the cruel civic hypocrisy of municipal authorities. Never mind the fact that without these workers doing the low-paid jobs that they do, our grand wannabe-bullet-train-connected cities would collapse. And Delhi, as Zahura Bibi said, would be buried under its own garbage.

As we leave, we meet 35-year-old Ajmera, mother of four. Her husband is a drug addict, and she is the sole earner. Like several others we met, Ajmera sold surf, sabun, harpic and other goods spread out on four wooden takhats. Three takhats were destroyed on April 20. We take heart from this. “At least one takhat is left,” We say. Ajmera half-smiles a smile of bitterness.

“Us par ab wahan police wale baithtey hain (That is where the policemen now sit),” she says, gesturing to the open expanse of the road beyond the gates of her narrow gali.

Farah Naqvi is an activist and writer who lives and works in Delhi. Navsharan Singh is an independent researcher and activist.