'Those who twisted the matter in the media will be identified and legal actions will be taken against them,' ADG (law and order) Prashant Kumar said.

New Delhi: Two days after the victim of the brutal gang rape case in Hathras succumbed to her injuries, the Uttar Pradesh police has said there is no evidence the woman was raped.

Hathras superintendent of police Vikrant Vir has said that the report by the Aligarh hospital, where she was admitted before she was brought to Safdarjung hospital does not confirm rape.

Meanwhile, the postmortem report from Safdarjung hospital where she was shifted on September 28 –  14 days after the incident – came out the day after she died in the hospital.

On Thursday, Vikrant Vir was quoted as saying, “The medical report from the Aligarh Muslim University Medicical College mentions that there were injuries but it does not confirm forced sexual intercourse. They are waiting for a report of the forensics. As of now, doctors say that they’re not confirming rape.”

Also read: When It Comes To Rape, We’re Still Asking The Wrong Questions

The news agency PTI has also reported that the Additional Director General (law and order) of Uttar Pradesh police Prashant Kumar has said, “Forensic report makes clear the woman was not raped.”

“According to the postmortem report, the victim died due to the trauma of her neck injury. FSL report also clearly shows that sperm was not found in the collected samples. It suggests that some people twisted the matter to stir caste-based tension,” Kumar was quoted by ANI as having said.

The post-mortem report has revealed that she was strangulated and had also suffered severe injuries in her spine. The marks on the neck of the victim are consistent to attempted strangulation, the report says.

In the Brief History section, the post-mortem report says:

“Alleged history of strangulation by some unknown persons from behind with dupatta while she was doing some work in the field on 14.09.2020 at around 4:10 pm, where on examination she was conscious and oriented to time, place and person, ligature mark was present over front of her neck.”

The post-mortem report specifies the time of her death as 6:55 am. A ligature mark was present in front of the victim’s neck, as per the report. The report also says that the victim died of a spinal cord injury.

The report says that the spinal injury which she had sustained was responsible for her paralysis and ultimately, her death. When the breathing stopped, CPR was performed.

The cause of death in the report is specified as, “Injury to the cervical spine (neck) produced by indirect blunt trauma, and its resultant sequelae. The ligature mark over the neck is consistent with attempted strangulation but did not contribute to death in this case.”

The post-mortem also mentioned that the cause of death will be confirmed by a chemical analysis report of the viscera. The hospital has handed over vital samples to the investigating officer in the case. 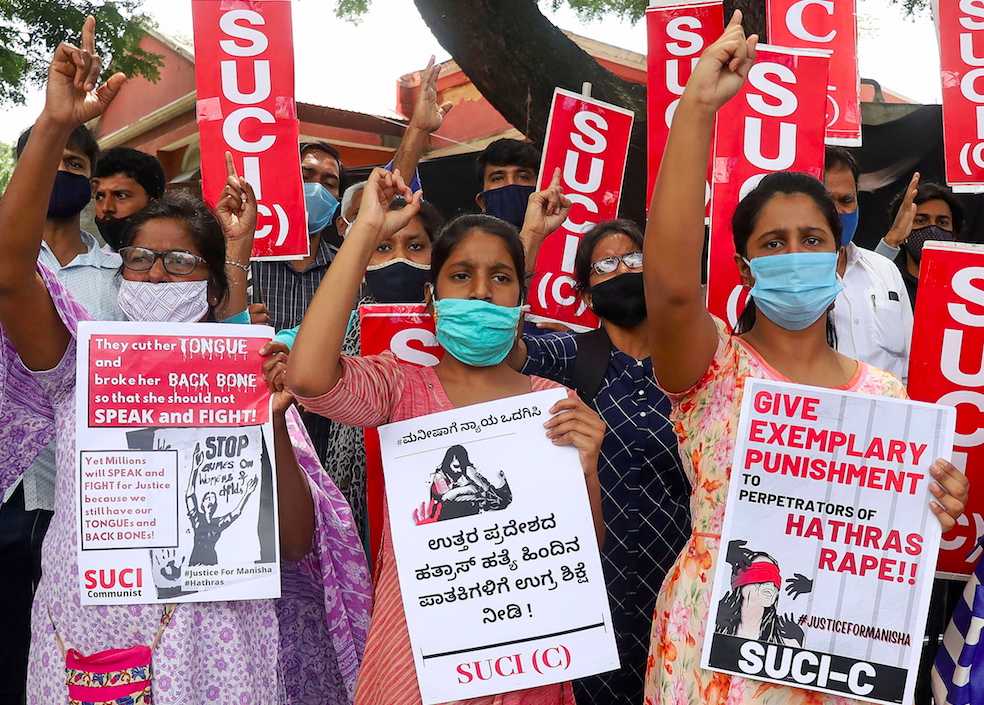 N.C. Asthana, retired IPS officer and former DGP Kerala, told The Wire that discounting rape in this case is wrong.

“According to the definition of rape as amended by the Criminal Law Amendment Act, 2013, penetration of the vagina by the penis in the conventional sense of intercourse is not at all necessary to constitute the offence of rape. Now, insertion, to any extent, of any object or a part of the body into the vaginal urethra, or anus of a woman also constitutes rape. “To any extent” is the critical part. It means that the slightest contact with the concerned part would also make for rape,” he said.

“Police officers and doctors who are looking for signs of conventional penile and full penetrative vaginal intercourse to infer whether rape was committed or not do not seem to have understood the amended law properly. Presence of semen in the vaginal tract has never been considered necessary to constitute rape. There are a large number of Supreme Court judgments on this. Furthermore, if a victim had been in hospital for nearly two weeks before the post mortem, it could always be alleged that the vagina was, at some point of time, douched without her knowledge,” Asthana added.

Asthana is of the opinion that even if a girl’s hymen has old healed tears, as the report suggests, it is of little consequence when it comes to the offence. “It is well known that the hymen can be ruptured due to various types of physical activities. It therefore does not matter whether the victim was a virgin or not. Once again, the law on this is absolutely clear,” he emphasises.

He added, “It is simple. It was a sort of judicial hanging minus the drop. They dragged her by looping the dupatta around the neck. Now the dupatta was probably not pulling exactly in line with the spinal column and was pulling asymmetrically. In judicial hanging also the knot is set to a side and not behind the neck. Moreover, since she was dragged on rough ground, it meant that lateral or shearing forces produced by the undulating surface also acted on the spine resulting in a torque. The torque damaged the spinal cord. In judicial hanging the cord snaps because of the jerk. Here, it got damaged.”