A Murder in Hathras, and a Question for the Country's Conscience

Today, our judiciary and justice delivery systems are standing in front of justice, as accused in a witness box. 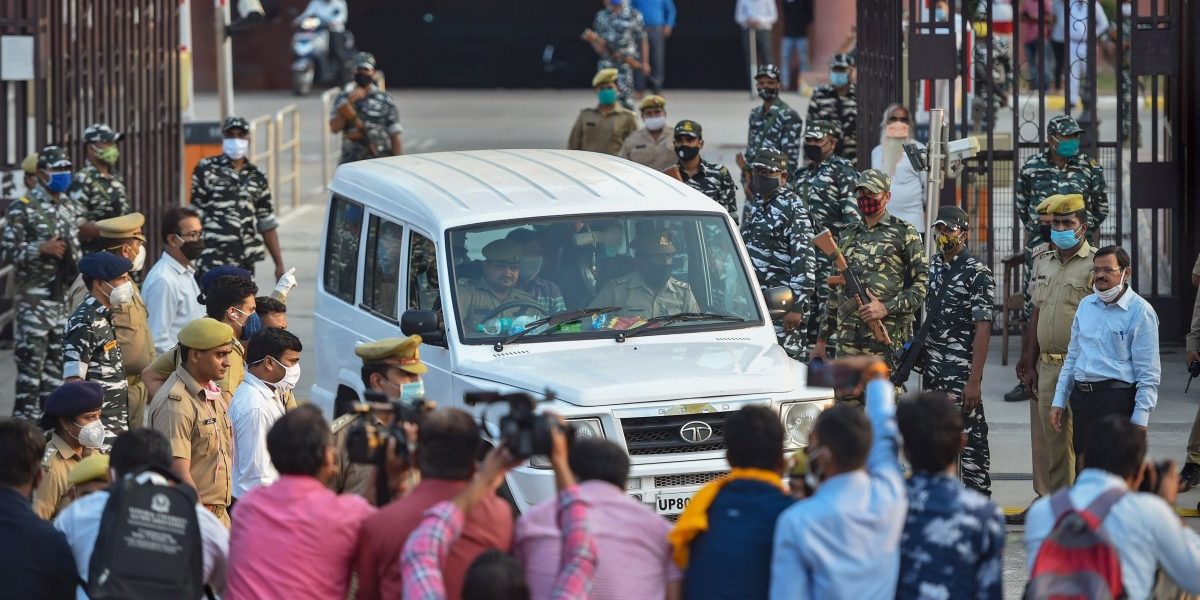 Family members of a Dalit woman, who was gang-raped in Hathras, leave the high court amid tight security after a hearing, in Lucknow, Monday, October 12, 2020. Photo: PTI/ Nand Kumar

The death of the 19-year-old Dalit woman in Hathras is horrifying to even think about. No, it’s not a death. It’s a murder – a murder committed by the police system of Uttar Pradesh, at the behest of  its government.

Let’s ponder over this for a minute: the teenager, who was brutally raped, was made to wait outside the police station for hours. She was barely conscious when she was brought there. Yet she is recorded on video saying her attackers had tried to commit ‘zabardasti‘ on her. As per procedure, she should have been sent to a rape crisis centre. That was not done. As per procedure, she should have been sent for a sexual assault forensic examination within 24 hours. Instead, the examination was delayed so long that any forensic evidence of the presence of semen was compromised.

In her dying declaration, the woman clearly stated that she had been raped and also named the culprits. Despite this statement, a senior police officer told the media,“Forensic report makes clear the woman was not raped… According to the postmortem report, the victim died due to the trauma of her neck injury. FSL report also clearly shows that sperm was not found in the collected samples.” As if this is not enough, she was made to shift from one hospital to another while battling for her life. The district magistrate of Hathras was caught on camera threatening her family. All these developments might have put fear in the mind of the police administration that if she remains alive, or even if her body is not quickly disposed of, the woman herself is the evidence. So they did everything in their power to get rid of the ‘evidence’.

Also read: UP Is Not The Right Home for Daughters: Keki Daruwala’s Poem on Hathras

The state’s cruelty doesn’t stop with death. After the teenager died as a result of the barbaric violence she was subjected to, the police, so as to destroy all evidence that an independent postmortem might reveal, brought her corpse to her village and burnt her body at 2:30 am using petrol in what they call a “cremation”, despite the cries of her family to not cremate her at night as it is against their rituals. Not only did the police prevent the woman’s family from cremating her body, they locked the family into their house and denied them the last chance to see their daughter’s face.

Her mother kept pleading in front of the police to let her apply haldi (turmeric) to her daughter’s face as per customs, but her pleas fell on deaf ears and the teenager’s body was turned to ash in the dead of the night.

Can anyone expect justice in this situation? Will her parents get any consolation even when justice is delivered? It’s difficult, very difficult. Nowadays a new slogan is in the news: BJP se beti bacho (Save your daughters from the BJP).

At the same time, our justice delivery systems have become even scarier. In the recently concluded Babri Masjid demolition case, the accused, who were very much present at the scene of the crime, have been acquitted. On the other hand, in the Elgar Parishad case, even though no violence took place and people like Anand Teltumbde were also not present at the meeting, they were made accused and imprisoned. The present justice delivery system appears to be in alignment with the old Manuwadi system, where the degree of punishment is based on where you belong in the caste hierarchy.

In what direction are we going? Forward or backwards? Today, our judiciary and justice delivery systems are standing in front of justice, as accused in a witness box. The country is becoming directionless.

Finally, I have a request to make.

Let’s bring a fistful of mud from the place where the teenager’s dead body was burned or from the land that she walked and make a memorial, with her statue. Her mother wanted to apply haldi on the woman’s face for the last time. All of us will apply haldi on her face. Can we apologise to her, and pay tribute to her in this way? Can this bring any consolation to her parents and to Mother India?

Devanoora Mahadeva is a Kannada writer who has been conferred with the Padma Shri as well as the Sahitya Akademi award, both of which he returned in protest against the growing intolerance in the country. A public intellectual and Dalit rights activist, he has been a guiding force to various social movements in Karnataka and the country.