A guide for the prevention, prohibition and redressal of workplace sexual harassment.

Women in India at an anti-harassment protest. Photo: Reuters

As the #MeToo movement rages in India, with scores of individuals, mostly women, narrating incidents of sexual harassment in workplaces and beyond, it becomes pertinent to ask the fundamental questions of what constitutes sexual harassment, what grievance redressal mechanisms are in place for survivors and for those who are falsely implicated. Here are the answers to those questions, adapted from The Handbook of Sexual Harassment of Women at Workplace (Prevention, Prohibition and Redressal) Act, 2013, released by the Ministry of Women and Children in November 2015.

Who is covered by the Sexual Harassment of Women at Workplaces Act?

The Act recognises the right of every woman to a safe and secure workplace environment irrespective of her age or employment/work status. This includes women with any employment status – permanent, temporary or freelance. They may be working for remuneration, on a voluntary basis or otherwise. Their terms of employment can be express or implied. Importantly, the Act also covers women working in a dwelling place or house. Thus, domestic workers have equal rights to report under this Act.

What is a workplace?

A workplace is defined as “any place visited by the employee arising out of or during the course of employment, including transportation provided by the employer for undertaking such a journey.” As per this definition, a workplace covers both organised and un-organised sectors.

In the digital age, this definition can be expanded to telephone conversations, texts and messages on social media.

‘Sexual harassment’ includes any one or more of the following unwelcome acts or behaviours (whether directly or by implication):

Remember that a multitude of ‘unwelcome acts and behaviours’ are included in this definition, ranging from physical advances to unwanted propositions to body shaming and sexual humour.

Very often, situations that start off innocently end up in inappropriate and unprofessional behaviours. It is important to remember that workplace sexual harassment is unwelcome, and the experience is subjective. It is the impact and not the intent that matters, and it almost always occurs in a matrix of power. It is possible that a woman may experience a single instance of sexual harassment or a series of incidents over a period of time. It is important also to remember that each case is unique and should be examined in its own context and according to the surrounding circumstances as a whole.

This means that even an ‘unintended’ act of a sexual nature, say a suggestive remark or an inappropriate question, can be reported as a case of sexual harassment if its impact makes the recipient uncomfortable.

Who is responsible for making the work environment non-hostile?

Employers and district officers are both responsible for creating a non-hostile work environment. Employers are expected to set up an internal complaints committee (ICC) to deal with complaints within the workplace. For smaller organisations (less than ten employees), the district officer for the area is expected to set up a local complaints committee (LCC) with a nodal officer who collects complaints. The nodal officer can also take up complaints that the employer either refuses to entertain or are about the employer him/herself.

What if I want to file a complaint?

As an employee, it is your legal right to receive a copy of your workplace sexual harassment policy. If at any point you feel uncomfortable, feel free to ask HR or your ICC for information on their policy. If they do not comply, research your nearest LCC and request information from them.

For any form of redress to be implemented, the complainant must file a written complaint with the ICC (or, in rare cases, the LCC). The written complaint should contain a description of each incident. It should include relevant dates, timings and locations; name of the respondent(s); and the working relationship between the parties. A person designated to manage the workplace sexual harassment complaint is required to provide assistance in writing of the complaint if the complainant seeks it for any reason.

What am I entitled to as a complainant?

When it comes to redress for workplace sexual harassment, you have the right to expect a trained, skilled and competent complaints committee, a time-bound process, information confidentiality, assurance of non-retaliation, counselling or other enabling support where needed and assistance if you opt for criminal proceedings.

If you need interim measures to be taken while a complaint is pending inquiry you can make a written request for transfer or for the transfer of the respondent, or for leave (up to 3 months). You can also request the complaints committee to restrain the respondent from reporting on your work performance, writing a confidential report or supervising your academic activities (in case she is in educational institution). Even in the absence of such a request, the complaints committee must take corrective action.

What am I entitled to as a respondent?

Although, understandably, the majority of rights lie with the complainant, as a respondent who feels wrongfully accused, you are entitled to

What is the process once a complaint has been noted? 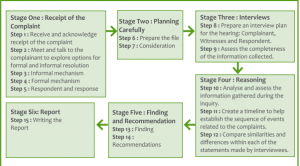 What is the difference between informal and formal resolution?

Informal resolution is what happens before a file is prepared. Generally, this involves meetings with HR and the ICC to mediate between the complainant and the respondent. In cases of minor harassment that can be resolved by making the accused aware of the impact of his/her behavior, this might be adequate.

Formal resolution takes place when it is found that informal resolution has either had little to no impact or is inadequate for the gravity of the situation. This is when a formal inquiry into the incident(s) takes place, culminating in a recommendation by the complaints committee.

What happens if the respondent is found guilty?

General service rules may exist as precedent for punishment and redress. If they do not, punishment can range from:

Financial compensation may also be provided.

What happens if there is inadequate proof and the complaint cannot be substantiated?

Given that most workspaces today are gender-unequal and male-dominated, it is important that complaints by women be treated fairly and not dismissed. The mere inability to substantiate a complaint or provide adequate proof will not attract legal action against the complainant. However, making a false or malicious complaint or producing a forged or misleading document is an offence.

This means that there is no legal danger to filing a complaint even if there is no evidence or verifiable proof.