For the BJP, 'Women's Rights' Are Really All About the Men

The Sangh’s vision for Indian women is a choice-less, voice-less horde of mothers and sisters in service of a patriarchal nation. 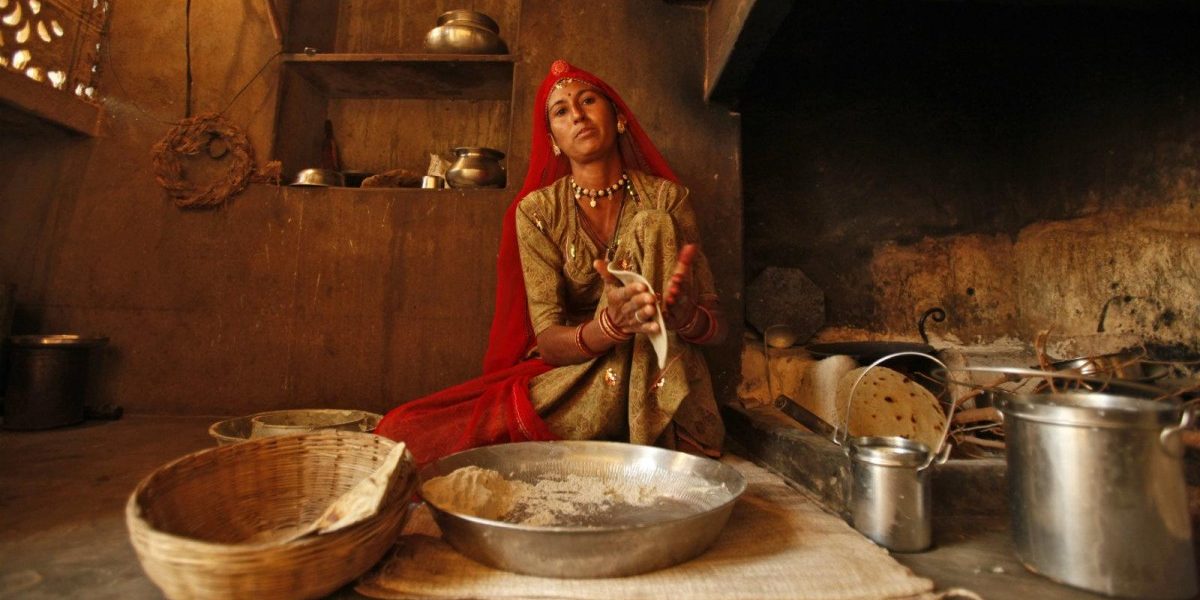 One BJP MLA, Kuldeep Singh Sengar, put sleepy Unnao on the national map as its best-known rape accused. In Jammu and Kashmir, BJP state ministers marched, waving and shaming the tiranga, in support of men who gang-raped and murdered an innocent child in Kathua. The Uttar Pradesh chief minister’s answer to violence against women is ‘Romeo squads‘. And the main job of the squads is to beat up consenting young men and women who cross caste/community lines.

For Hindu women, the BJP opposed entry to Sabarimala. For Muslim women, it enacted a farce by criminalising ‘triple talaq in a single setting’ (talaq-e-biddat) after it had already been made illegal by the Supreme Court. So off to jail go the offending Muslim men, leaving Muslim women and children with no financial support.

Thus far, the BJP has fielded only 53 women out of 429 candidates announced for the Lok Sabha elections. Among them is Pragya Thakur, an accused in the Malegaon blast case who says she cursed 26/11 hero Hemant Karkare to death.

This is not an impressive record. But Bharat Mata Ki Jai.

“Mataaon, behenon aur betiyon (mothers, sisters and daughters)” is the core of BJP-speak on women. Women in this framework are relational appendages to the male-headed household. They occupy roles. Critical roles, but structurally subservient ones.

We are the ones who make the rotis while men do more important things. Recall Pulwama and Balakot. The honourable defence minister Nirmala Sitharaman was missing in action while ‘The Man’ of the government flexed his muscles.

Also read: The Disquieting Nature of BJP’s Response to Violence Against Women

Rotis. That’s what we do best. Bent over the smokin’ stove, which despite the prime minister’s Ujjwala scheme, and the media blitz around it, is still not a gas cylinder.

The scheme has turned out to be a cruel joke on India’s poorest women because there is no subsidy for the Rs 700+ refill for the second cylinder. This is akin to giving someone, surviving on less than Rs 32 a day in rural areas and Rs 47 in urban areas (the Rangarajan Committee definition of ‘poor’), a shiny new home and then telling them: ‘By the way, please pay rent from next month onwards.’ 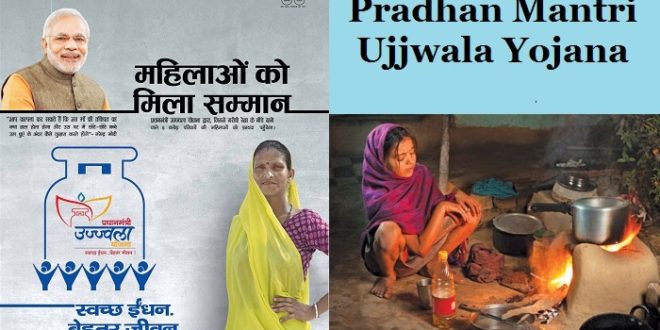 A poster for the Ujjwala Yojana scheme.

A one-time subsidy, for a daily recurring expense, is an act of bad faith. Making it worse was the publicity around the scheme, promoting benevolent patriarchy and exalting domestic drudgery for girls.

Scan the internet and images abound publicising Ujjwala with young girls sitting in front of stoves or looking pleased about their imminent future. 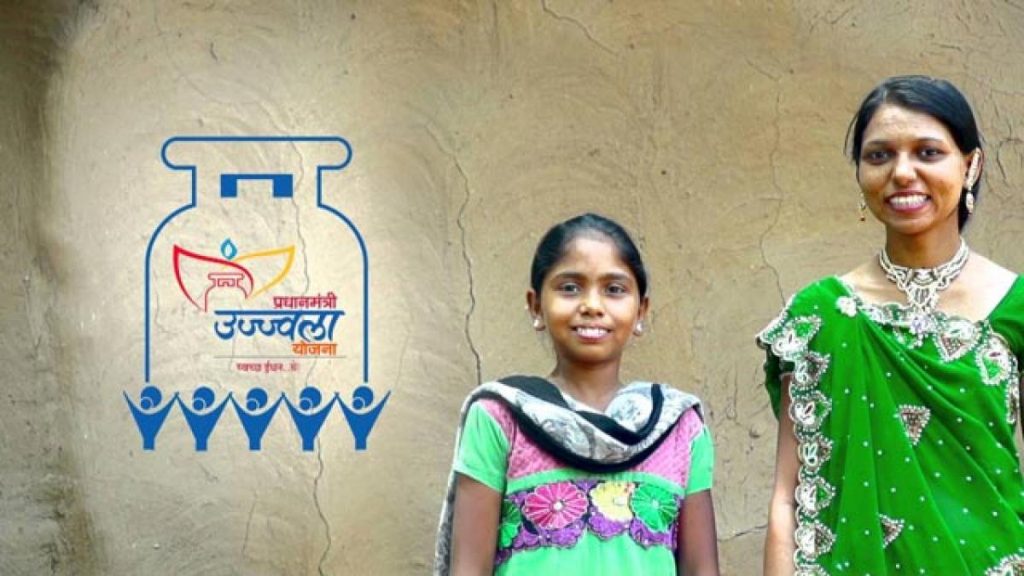 Another poster for the Pradhan Mantri Ujjwala Yojana.

What do these images tell us? Should this girl be the logical GenNext to make the roti at home? Can she dream about becoming an airline pilot or a university professor instead? The Central government can claim it didn’t ‘officially’ put out these images, but clearly it did nothing to stop them. And how hard is that to do? The prime minister is image-managed and airbrushed from every angle. He is great at selling dreams, be it bullet trains or smart cities.

So, sell some dreams for young girls. And start by sending out a circular saying – do not promote roti-making as their logical choice, a practice that militates against gender equality and the right to education. These images tell a thousand sorry tales of how little the idea of young girls bent over hot stoves offends the ruling party.

Here (below) are not just one or two but three fulsome generations – grandmother, mother and daughter – all seemingly thrilled at being tied to the kitchen, hugging a gas cylinder for the rest of their lives. And this image is clearly official. 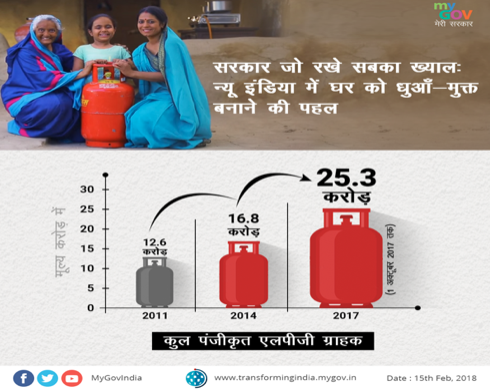 Despite the desperate inter-generational appeal, India’s poorest women have retreated from Ujjwala, and are back to breathing fumes from coal, cow-dung or wood-fire stoves.

And instead of an abject apology, we got Sambit Patra (BJP top gun in the age of TV wars) appreciatively stroking our bent backs while campaigning in Odisha. 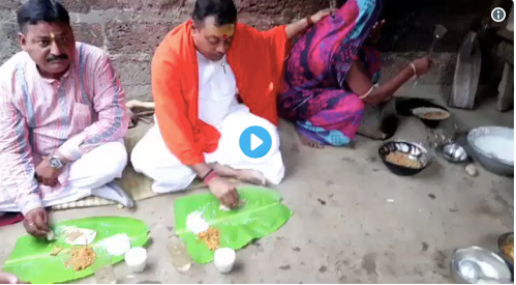 What happened? Did Ujjwala not reach this woman? And ‘Mahilaon ko samman’? I do not think any woman in India mirrored in this patronising image was respected.

Women spending more time than men on housework and childcare is a global problem. But India is among the worst. Here, men spend a stingy 36 minutes on unpaid care responsibilities, of which just 36% goes on housework. Women devote six hours to unpaid care time, with 85% on housework. A progressive vision of women’s rights needs to begin by changing this. India’s child sex ratio at 919 girls to 1,000 boys in 2011 was the lowest ever in our history. This unabated devaluation of women is frightening, and is, or should be, a national crisis.

So we got Beti Bachao, Beti Padhao (Save Girls, Teach Girls). That was another flat balloon: 56% of the money went on publicity. Only 24% of the funds were disbursed to states/districts. The rest of the money went unspent.

Meanwhile, the sex ratio has continued to plummet. A NITI Aayog report shows a drop in the sex ratio at birth in 17 out of 21 states. 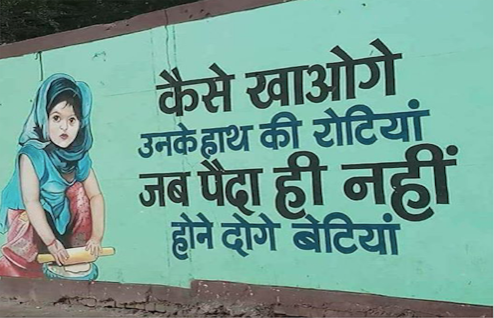 So it seems that to the ruling party, girls must be born so they can make rotis for the nation for the rest of their empowered life.

And in 2014, while adopting the village of Jayapur in his Lok Sabha constituency of Varanasi, Prime Minister Narendra Modi gave us the other reason. “Those who look upon the girl child as a liability should ponder as to how will mankind survive if we are left in a world with no women… If we kill the girl child in the mother’s womb, then what will happen to the world? If only 800 girls are born against 1000 boys, then 200 boys will remain unmarried.”

Even this is somehow all about the boys.

And when talk of marriage comes up, talk of gold is not far behind:

“Bharat mein mahilayon ke paas kuch hota nahin hain. Makaan hai to pati ke naam pe, pita ke naam pe, gaadi hai to pati ya bete ke naam pe. Bariki se dekhein to sona ek hota jo mahila ki taakat ka vishay hota hai. Samajik vyavastha ka bahut takatwar hissa raha hai…Jo women empowerment ka bahut bada pehlu hai. Yeh jo hamare sanskaar ka uttam pehlu bhi hai (Women in India own nothing. Their homes are in the names of their husbands and father and their vehicles under the names of their sons. If you see it minutely, it is just gold that is the strength of a woman. It is also a big part of our social order…which is a big aspect women’s empowerment. It’s also an important part of our sanskaars),” he said in November 2015.

The traditional drill of giving gold to Indian women at the time of marriage, in lieu of equal entitlement to property, cars and bank balances, is not the benchmark for women’s economic rights in the modern age. And the line between ‘voluntary’ stree dhan and ‘coercive’ dowry demands is today entirely blurred in practice. But these nuances escaped the prime minister, as he waxed eloquent on our golden ‘sanskaars’ – all in the name of women’s empowerment.

Now armed with girls, gold and marriage, we get to the real goal – making babies.

This clincher arrived in my mailbox on March 9, 2019. the subject stated: ‘On women’s day find out how women-led development is building a new India.’ 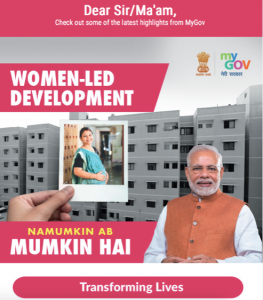 Source: My mailbox (This image was hard to de-code. Was the pregnancy ‘namumkin made mumkin’ or the high-rise backdrop?)

(Pregnant) women-led development. The Hindu right is fixated on pregnancy and motherhood. And each Sangh parivar worthy enthusiastically spouts a different magic number. Remember BJP MP Sakshi Maharaj’s exhortation to Hindu women to go forth and procreate in January 2015? His ask was four children.

Days later, a party leader from West Bengal upped it to five. “I have only one request… Every Hindu mother and sister will have to produce at least five children,” said Shyamal Goswami, the BJP’s vice president in Birbhum district.

Around the same time, while attending the Magh Mela in Allahabad, Shankaracharya Vasudevanand Saraswati of Badrikashram pushed the magic number to ten. “It is because of Hindu unity that Modi has become the prime minister. In order to maintain their majority status, every Hindu family should give birth to 10 kids.”

While these guys are busy asking women to produce more and more Hindu babies, please note that the benefits of the Pradhan Mantri Matru Vandana Yojana are limited to the first birth, which excludes 86% of pregnant and lactating women.

But who really cares about the women?

In February 2015, Sadhvi Prachi felicitated and garlanded around a dozen Hindu men who had four or more children. Those “honoured” included Dwarika Singh, 65, who had 11 children, Rampal Singh and Surnam Singh, who had nine children each.

The baby-making machines who underwent labour 11 and nine times respectively, were nowhere to be seen.

This is the essence of the Sangh’s vision for women rights – a choice-less, voice-less horde of mothers and sisters in service of a patriarchal nation. Ultimately, it is just about the men.