'They Took Down Their Pants, Pointed Their Genitals at Us, and Said, 'Yeh Lo Azaadi''

Muslim women provide accounts of sexual taunts and violence by the right-wing mobs which attacked their homes in north-east Delhi. 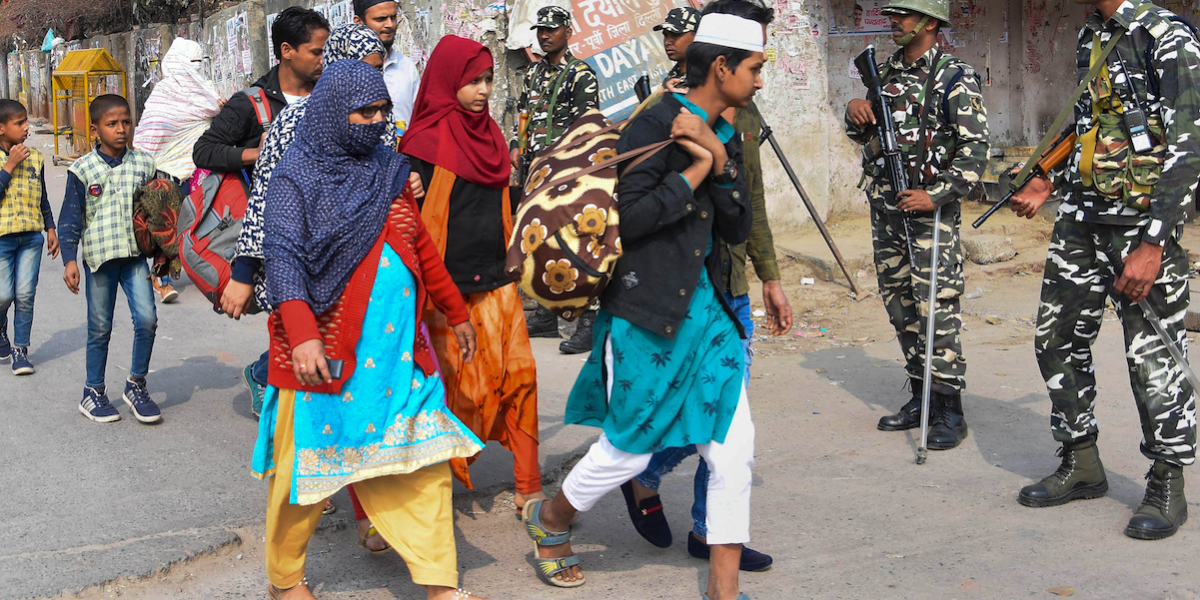 New Delhi: Two separate groups of women from the riot-hit areas of north-east Delhi, one of which was present at the Chand Bagh protest on Monday, and one which was present at the violence perpetrated at Shiv Vihar, have told The Wire that members of a right-wing mob pulled down their pants, exposed their genitals to them and said, “Yeh lo azaadi.” (‘Here, take freedom.’)

‘Azaadi’ is part of the rallying cry that protesters across the city have been using to ask for freedom – from the Citizenship Amendment Act, from the National Register of Citizens, from the reign of Narendra Modi and Amit Shah.

The word has now been twisted by those perpetrating violence against them, as a vicious response to the freedom they sought – as if to say the only freedom they will get is the freedom of this violence.

“I was standing at the Chand Bagh protest site when two members of our protest had been detained by the police. The women of the protest came out to confront the policemen and ask where they had been taken. A group of right-wingers came up to us, shouting ‘Jai Shri Ram’, and four men there pulled their pants down and pointed their genitals at us, and shouted ‘Yeh lo azaadi’,” says Asifa*, who did not want her name to be published for fear that she would be arrested.

She fell unconscious during the tear gassing. Others there – including elderly women and pregnant women – sustained injuries after being lathi charged by the police.

This sequence of events was also narrated by an activist who was present at the site, saying the incident took place around noon at Chand Bagh on Monday, February 24.

“We thought that if there was stone throwing happening, it would happen from both sides. But the protest site people were not throwing stones, because they were being tear gassed constantly.”

She had come from across the road, through the right-wing mobs across the divider.

“I heard them say, bring the women out onto the road. ‘Bahar lao unko, yahan pe ragdenge, ghasitenge’ (‘bring them out, we will assault them, drag them’).”

She also says the police was throwing stones at the protesters.

If the threat of sexual violence was wielded against Muslim women in Chand Bagh, eyewitnesses that fled the mobs from Shiv Vihar say there were many instances of sexual assault there.

A group of women who fled their homes in Shiv Vihar have come to stay at Mustafabad.

Rubina says, “When they were spreading terror there, out of fear we stayed in our homes. They threw stones at our doors, and broke them with lathis. They burnt gas cylinders at our mosques, and they beat our men. We left everything and we ran when we could for fear of our lives.”

She tells us of her neighbour, who had taken her daughter and fled to the terrace in the hope that she would be safe there, and on seeing that they would not be, had jumped from the terrace, with the daughter’s legs breaking in the process. She speaks of another neighbour’s daughter who was ‘dishonoured’ and killed.

“They burnt our thela down. We sold boiled eggs. We just spent Rs 5,000 to buy the thela instead of renting it. I don’t know where we will get food for the children now,” says Ameena*.

“My daughter has TB. At risk to my life I went to the chemist at Khureji, to get her medicines…They said ‘yahaan katwa log Hindustan mein rehte hain, Pakistan jana tha’. They jeered. They were saying ‘katwe log ko dawa mat doh’. Where were we supposed to go to for medicine?”

‘Katwa’ is a slur for a (circumcised) Muslim.

Also read: Ground Report: ‘Normalcy’ Returns to a Corner of Delhi, But Fear and Grief Are a Step Away

Afreen* is sitting and while she talks furiously, a small toddler, about three, climbs over one of the reporters to make her way to her mother’s lap. Ameena lifts the child onto her lap without taking a break in her speech. As her mother speaks, the child starts to cry, asking for attention.

“The mobs were from outside, but there were also locals there. The locals told them where we lived – this is a Hindu house, this is a Muslim house.”

They are furious that on TV, their voices are not being aired. One says, “Are we not human? Are only Hindus human, are Muslims not human? They should show ours as well, how they beat us, how they burnt our mosques. Kapil Mishra is responsible for this.”

Another woman says that they put acid on the mosque’s imam and his daughter. The Wire has not been able to confirm this claim.

Afza* speaks up with a voice raw, hoarse with grief. She has been crying for a week.

“They’ve looted the house, and the shop. When my husband went to see what was left, he searched for our Koran. The Koran had been destroyed. What had our Koran done, to be destroyed? They threw it, they burned it,” she says.

Her voice breaking, she says through tears, “I don’t know why we survived, they’ve taken everything. Do I have the right to live here? I do not. And I do not want to live, better than this that they had killed me then. I wish I had burnt with my house, I wish my children burnt down. What do I do in that house now?”

“They have made our home a graveyard,” says another woman.

They say the children are so scared they can’t stand, trembling at the thought of going out.

“My brother went to get a Koran. The police said stop, and out of fear he halted, trembling. He was holding his Koran in his hand.

“They made him do sit-ups holding onto his Koran. How is this justice, how are we supposed to live here, how am I supposed to live, will anyone tell me what will become of me.”

Minhaz*, and Mereen* who are schoolchildren in the 9th grade, say that they weren’t even able to give their exams.

Rifat, who is pregnant, talks about how she fled the violence.

“We scrambled through someone else’s terrace…They were cutting people and throwing them in the drain. The police were not helping us, they were helping them. They were shooting people, I saw it with my own eyes, from the roof. Two men brought another man on a motorbike, and gave him to the police, and the police shot him. I can barely say this, every time I say it my heart beats fast.”

“Modi and Amit Shah have not said one word. If this was too far for them to come, the least they could have done was said something on TV. Is this any kind of government?

“You’re doing rallies across the world, but can you see us? You’re releasing all these new schemes, but they will only be useful if people are still alive. When we are not alive, then what use are your schemes?