No State for Women? Why Crimes Against Women Are Rising in UP

The Unnao case highlights disturbing details on the extent of lawlessness and arm-twisting of administrative machinery in Yogi Adityanath’s government.

As members of the UP police were seen visiting schools across the town of Barabanki recently, one of the superintendent of police gave a long lecture to students of a school on women safety, and on need ‘to raise their voice against crimes’ for justice. From the audience, as reported, a Class XI girl in turn schooled the superintendent, asking, how can the UP police promise to assure safety for women if the ‘accused’ is a ‘powerful minister’, and the police administration remains complicit in protecting them.

The girl’s response is part of the national outrage seen against UP police’s treatment of the rape case filed by a 17-year old girl from Makhi village of Unnao a few years ago. The rape victim’s continued fight against the rape accused MLA Kuldeep Singh Sengar brings some of the most disturbing details on a rising extent of lawlessness and arm-twisting of administrative machinery in Yogi Adityanath’s Uttar Pradesh.

Amidst increasing incidence of encounters, dropping of criminal charges against the BJP’s own ministers and rising crimes against women, the very pretense of ‘improving law and order’ in India’s most populated (and electorally significant) remains an illusion. Only recently, a rape-and-kidnapping case against BJP’s leader (and former minister) Chinmayanand was dropped by the UP state police, forcing the victim write several letters to the president and district judge, urging them to issue a warrant against the accused.

Recent data from NFHS (National Family Health Survey) study suggests how UP now ranks first in incidence of (reported) crimes against women. These include all cases filed under sections of the Indian Penal Code (IPC) and Special Local Laws (SLL). 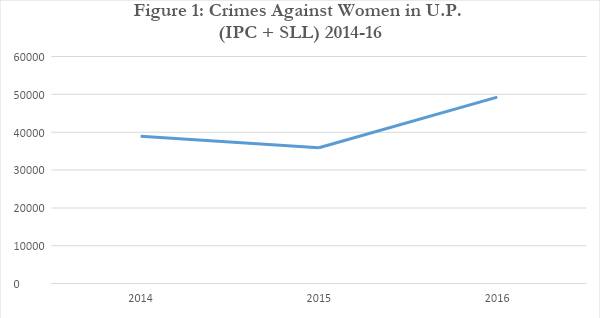 Further, based on a survey involving more than 10,800 women respondents from across the state’s districts, only 15% of respondents who experienced physical or sexual violence by anyone agreed to have sought help. Around three-fourths (77%) of all interviewed women neither sought help nor told anyone about the violence (at the time of the study). Only 4% of the ones who agreed to have sought help, did so from the local police by reporting the case. This highlights the massive problem of under-reporting (and lack of legal aid) that still makes most women fearful of reporting acts of violence against them.

Based on the figures of reported cases of crime against women in UP, from those in the age group of 15-49, more than 33% women reported to have experienced some form of ‘physical violence’ (within or outside the domestic household), with 94% of the reported violence being ‘sexual’ in nature. In cases of domestic violence, where numbers in recent years have continually been rising, the most-common perpetrator of violence remains the husband for ‘married women victims’, and for those ‘not-married’, the perpetrators include mother/step-mother (followed by ‘siblings’, ‘father’ or ‘teacher’).

Based on Figure 2 (below data) and on NITI Aayog’s recent figures on gender-based performance rankings of states, 42% men agree that ‘wife-beating’ is justified in circumstances where a wife either shows ‘disrespect’ for in-laws (28%), or if she argues with the husband (24%), or if the husband ‘suspects her’ to be unfaithful to him (23%). Even amongst those who have completed a minimum of twelve years of schooling and have basic-education, around 71% agreed that a husband is justified in physically assaulting his wife for any one of the above reasons.

This points at a growing culture of violence that is affecting the condition of women – right from the households – and their upward social and economic mobility in all respects. A common ‘fear’ against violence was shared by women across classes and caste-structures in a state where deep-rooted patriarchal conditions have subjugated women’s agency for decades now.

Based on a recent study undertaken in urban slums across the capital city of Lucknow, Hebert et al. (2019) discuss how gendered norms regarding female-male interactions reinforce more aggressively in harsher conditions across UP. An interviewed female participant from the study, describe (in the quote below) about being beaten by her mother and brother for playing with boys after school:

“I was ten years old, I did not know the difference between a boy and girl. In the evening, it was the time of our coaching classes. After coaching, all children were playing outside, I also started playing with them. Suddenly, my mother came and saw me playing there. She took me home and beat me so badly. I didn’t even understand why she was beating me. After that, she took me to my teacher. he explained to my mother that your daughter is not “that type of girl”, she is a good girl. Then my mother told my brother about this and he also beat me up. I was thinking why they are beating me, they have beaten me because I was playing or because I was lying that coaching class was over earlier and so we were playing there. But I wasn’t lying. My mother told me later that you were playing with boys, that’s why I’ve beaten you.”

Through similar narratives, one understands the extent to which gendered norms and (aggressive) behavior-expectations from girls within an average household in UP predominantly shape their own behavior about themselves and those around them at an early age.

More importantly, as Hebert et al. observe, for becoming ‘good’ girls, most families still see education for girls only in the context of making them appear ‘better prospects’ for marriage. This presents a complex interplay between ‘marriage’ and ‘education’ for those especially belonging to lower classes (and caste-groups).

An increase in legal awareness and reporting of criminal cases has gradually allowed a greater degree of social attention to gender-based violence issues at a national level. Still, cases such as Unnao, Banda, Shahjahanpur suggest how the current administrative systems in place need to start by amending their own institutionalised behavior against women i.e. in acting upon reported complaints or in initiating any form of behavioral change through law and non-law enforcing platforms.

More importantly, in cases where crimes are committed against women (including domestic violence cases), there remains a lot to be done by state-authorities for protecting the complainant herself. For now, from Unnao to Banda, each case shows how the BJP, under Yogi Adityanath, continues to be a regime of ‘systemic corruption’ providing ‘political patronage to criminal legislators’. The cause for realising social justice for women and ensuring safety remains a chimera.