Post-COVID, Female-Headed Households Are Left to Battle Paperwork and a Sexist System

Women who have found themselves in charge of a family after the sudden deaths of family members find rules, regulations and laws making mockery of their situation. 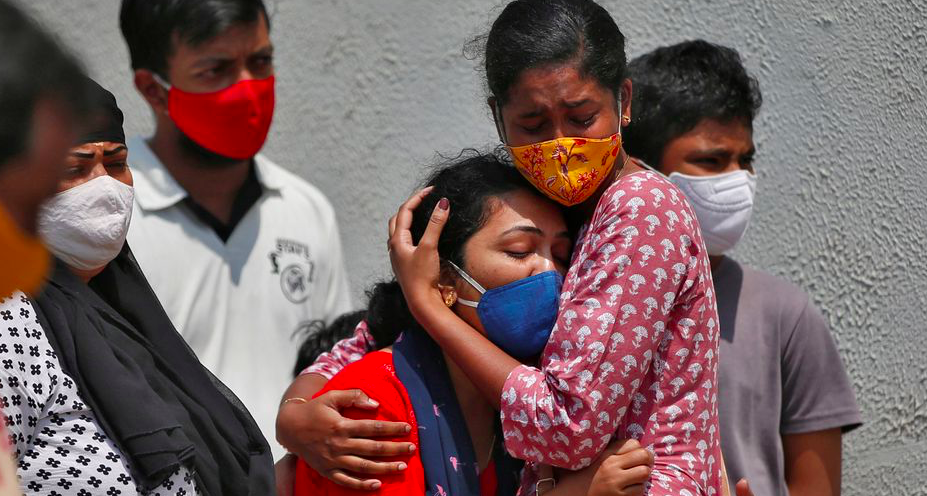 Representative image of a woman being consoled after the passing of her husband during the second wave of COVID-19. Photo: Reuters/Amit Dave

New Delhi: “He died months ago but the government reminds us of our loss everyday,” says Dipanwita Das, who lost her husband on April 25, 2021, at the height of the second wave of COVID-19.

Das admitted her husband to Guru Teg Bahadur Hospital as his vitals dipped and temperature rose. Her husband, Partho, passed away soon after, beginning an ordeal for the widow that she had entirely not foreseen.

First, the hospital misspelled her husband’s name on official document, delaying the procurement of a death certificate. To rectify this mistake, hospital authorities asked Dipanwita to file an application. They also asked her to update the ‘registered contact’ with her own number as the hospital had entered the number of a hospital attendant in that space.

This process took weeks. Amidst rising COVID-19 numbers, Dipanwita had to visit the hospital three to four times after her husband’s death, just to complete formalities so that she could get a death certificate.

Then began Dipanwita’s efforts at municipal offices, to cancel an initial request which had had the incorrect spelling that the hospital had entered, and put in a fresh application for death certificate validation so that she could be allowed to apply for COVID-19 compensation.

“You need money to get compensation out of the government and keep running from office to office. I only have enough money to buy rations for two people,” she says. The couple’s son is 17 years old.

Also read: COVID-19 Has Made the Rocky Road to Gender Equality Bumpier

On July 6, Delhi Chief Minister Arvind Kejriwal had launched schemes to compensate families who had lost their family members to the pandemic.

Dipanwita says, and this reporter found, that the link to the portal to register for compensation is broken.

This has left Dipanwita with no option but to depend on her meagre savings and donations from acquaintances just to travel to municipal offices and hospitals. “I don’t know how long we can survive until their help reaches us,” she said.

Dipanwita’s struggles take place as the Supreme Court heard petitions on compensation for families of COVID-19 victims, culminating in an affidavit from the Union government on Rs 50,000 assured ex gratia to such families, to paid from the State Disaster Relief Funds.

The government has also said that the guidelines will offer opportunity for review and rectification of any certificate of death issued by hospitals or government authority prior to the guidelines coming into force on September 3, 2021.

Whether this will come to the aid of Dipanwita’s situation is a question.

Like Dipanwita, 27-year-old Benazir Hassan has struggled with the volume of paperwork involved since her husband Kaleem Hassan died after testing positive for COVID-19. Benazir is left to fill up a pile of documents, for which she often has to enlist the help of relatives and acquaintances who can read and write.

“The fact that we have to prove that he died is humiliating,” she says. The couple have three children and Benazir is pregnant with a fourth child.

The process of applying for compensation is coordinated by the area’s district magistrate. It requires the family to furnish a proof of residence of the deceased and dependents, a death certificate, proof of COVID-19 death, documents establishing relationship between the deceased and applicant and bank account details of an applicant.

The death must be certified as a COVID-19 death or ‘death within one month of testing COVID positive’ and verified by the health department as such.

Shuffling the papers, Benazir says her application for compensation was rejected due to a lack of documents to certify her husband’s death as a ‘COVID-19 death’.

Without Kaleem’s ‘proof of COVID-19 death’ certificate, Benazir will not be able to avail herself of any of the financial assistance packages launched for the benefit of COVID-19 victims’ families. Her two sons, Rihan and Rizwan, have not eaten well since April 26, 2021, – the day Kaleen died.

“He died of breathlessness in my lap, I have seen how COVID-19 finished him,” says Benazir, noting the acute oxygen crunch at the time.

“I’m raising my kids on donations, I cannot work since I’m pregnant and now even our compensation application has been rejected,” she says.

Like Dipanwita, Benazir has also lost money in the process of going from office to office.

“It’s also impossible to get work done in government offices if you’re not assisted by a man,” she says. Benazir recalls being told that she won’t ‘understand’ the processing of her application.

Dipanwita’s son, Sagar, studies in DAV Public School, Jasola Vihar. When Dipanwita pleaded with the school to waive off fees as the government had mandated for children who lost their earning family member to COVID-19, the school principal said he would only consider waiving off 50% of the fees. 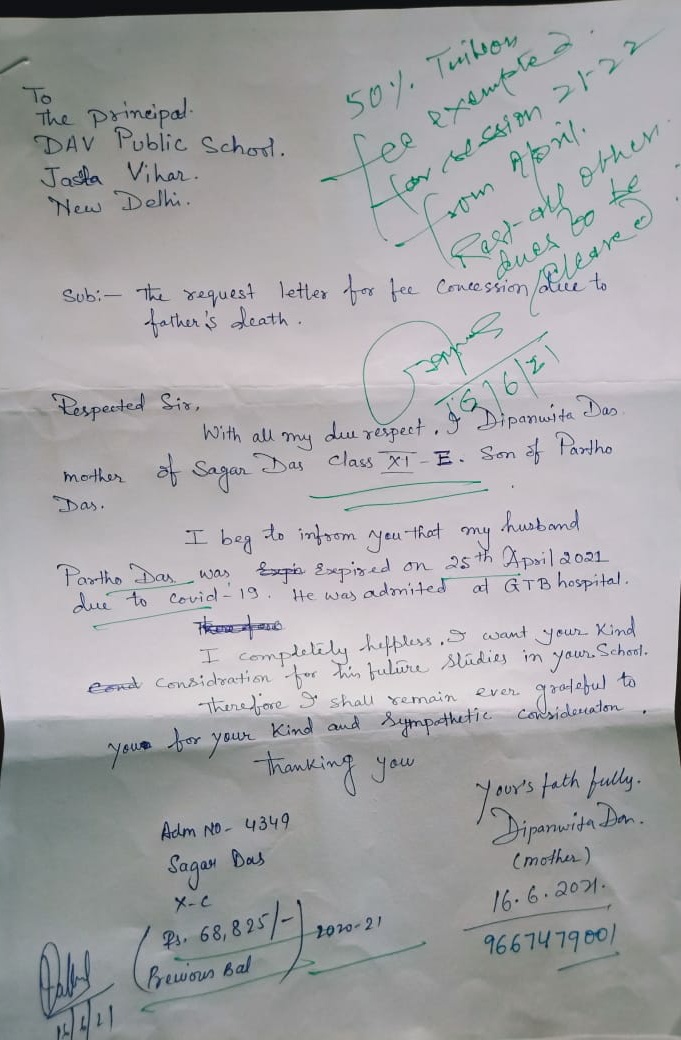 The letter Dipanwita sent to her son’s school and the principal’s note in green. Photo: By arrangement.

Dipanwita’s husband had been laid off from his job last year, so the family had already been in financial difficulty.

“I have not been contacted by government authorities and yet they claim to be helping COVID-19 widows,” says Dipanwita.

In Odisha’s Cuttack, Biraj Swain, a global development professional, has also dealt with a similar problem.

Her nephew, who studies at Kendriya Vidyalaya, has not been exempted from school fees either, even though his father, the only earning member of the family, passed away to COVID-19. Biraj says schools have paid no heed to government announcements.

The Odisha government had announced a reduction in the tuition fees in all aided and unaided private schools for the 2020-2021 academic session in wake of the prevailing pandemic situation.

Biraj and her sister-in-law Itishree have been undertaking massive amounts of paperwork since her brother, Biplab, passed away on May 4, 2021, because in their woman-headed household, the Hindu Succession Act has posed a problem.

While the law recognises Biplab’s wife and child as the legal heir, it does not allow an unmarried sister-in-law, to be recognised as legal heir, even though Itishree has signed an affidavit for Biraj to be made legal heir.

“Can’t secular laws be applied? Do we need to always need to go through the Hindu personal law, why can’t we be led through constitutional law?” Biraj asks. Biraj’s question is one to ponder amidst constant talk on reform and removal of the Muslim personal law.

The family had requested a change in ‘karta’ for their Hindu Undivided Family (HUF Account) at IDBI, a public sector bank. However, the bank suggested that neither the wife nor the sister can acquire the right of a co-parcener as they were not born in the HUF of Biplab Swain.

This account that had been registered with women co-parceners 11 years ago, and has been filing income tax returns for 10 years, will now have to be closed as the bank refuses to recognise its own mistake of initially allowing the two women to be co-parceners given that it now claims that the wife and sister were not born in Biplab Swain’s HUF. 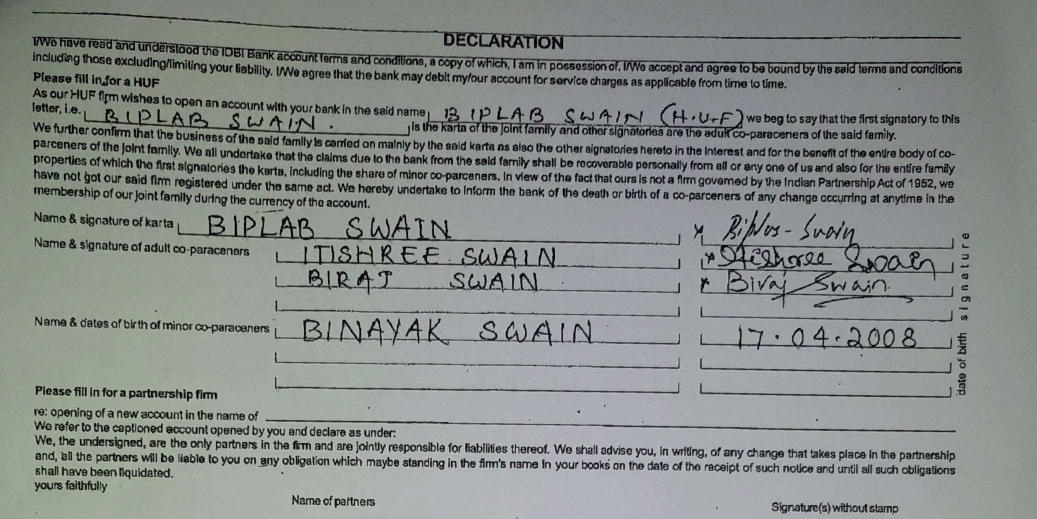 A section of the bank declaration that recognises the two women as co-parceners.

In a landmark ruling, the Delhi high court in 2016, in the case Sujata Sharma vs. Manu Gupta had held that the eldest woman of a HUF can be its ‘karta’, a term which designates the position of the operator of an HUF. Keeping that as precedent, Biraj as the eldest co-parcerner can be ‘karta’ since her nephew is a minor.

The Wire tried to contact IDBI Bank’s Smruti Ranjan Bhoi, who had suggested the closure of account to the Swain family. Bhoi did not respond to multiple attempts.

Along with the morbidity of post-death paperwork, Biraj says, women also have to deal with the misogyny of bureaucracy and Hindu laws. She alleges that even after 16 months of COVID-19, the death registration certificate has no separate column for COVID-19 death. This, she feels, not only helps the government deny COVID-19 deaths, but also deprives the dead of the dignity of being counted.