COVID-19 Has Made the Rocky Road to Gender Equality Bumpier

From employment and wages to vaccinations, Indian women are disproportionately bearing the brunt of the pandemic. 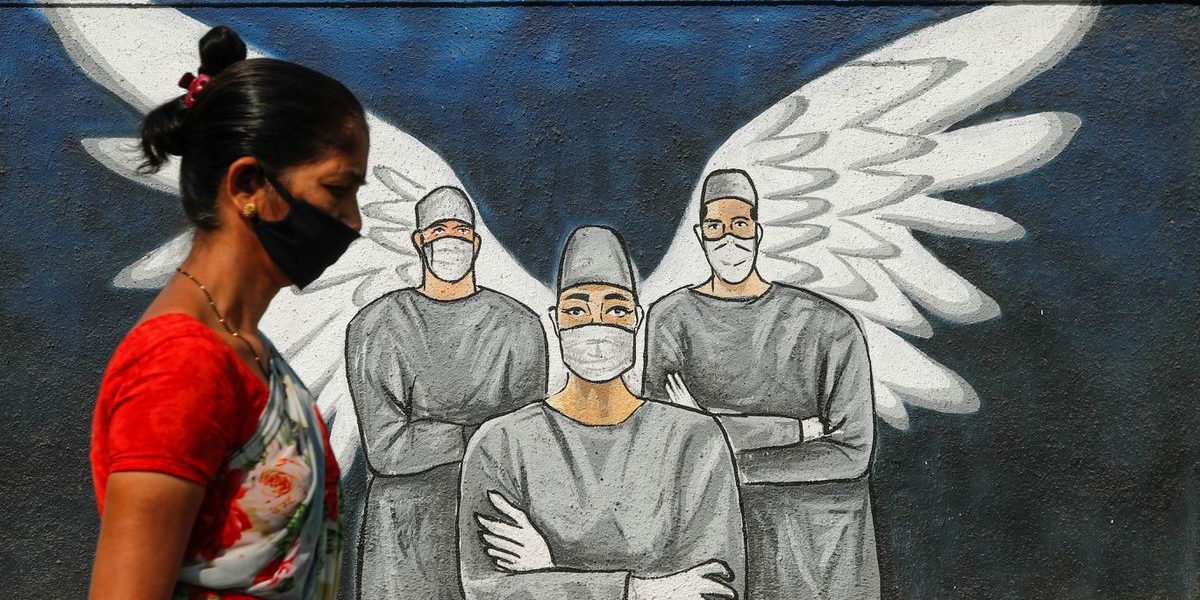 A woman wearing a protective mask walks past a graffiti amidst the spread of the coronavirus disease (COVID-19), on a street in Navi Mumbai, India, March 8, 2021. Photo: Reuters/Francis Mascarenhas

The coronavirus pandemic is not only making it harder to achieve gender equality in India, but also reversing gains made so far. Men everywhere are more likely to be employed and earn higher wages compared to women. In developed countries, the division between employed (working for wages) and out of the labour force (not working for wages and not looking for work) is clearly demarcated.

In developing countries like India, several women who get counted as “not working” actually contribute substantially to household economic activities (farming, livestock, kirana shops, workshops etc.): work that is unrecognised and unpaid. For this work, women need to be recognised legitimately as workers. They need to be seen as equal partners whose labour allows the household to earn a livelihood.

Everywhere in the world, the burden of domestic chores and care work ― reproductive labour ― falls disproportionately on women, regardless of their employment status. The enormous weight of endless and repetitive housework leads women to either drop out of paid employment altogether (or temporarily), or to seek part-time work. Women who manage to re-enter paid employment after a childcare break typically enter as juniors of, and earn less than, men comparable to them in age, education and qualifications. Collectively, as a society, we want children, for which mothers pay a penalty, but not fathers.

Also read: Why Pregnant Women Need to be Prioritised in COVID-19 Vaccination Drive

The COVID-19 pandemic has made this penalty steeper. Prolonged closure of schools and childcare centres have compelled women in developed countries, who were lucky enough to not be laid off, to drop out of the workforce.

While gender equality is notably higher in parts of the world like South Asia, attitudes towards sharing of household chores are similar in the belief that women are expected to do more.

What do women want?

National-level data from the National Sample Survey (NSS) or independent surveys document substantial unmet demand for work. When women who declare themselves to be “not working” outside the home are asked if they would be willing to work if work was available at or near their home, an overwhelming majority respond positively.

Women want to work, but the already high gender gaps in employment in India have been made worse by the pandemic. In April 2020, the first month of the stringent lockdown, more men lost jobs compared to men because pre-COVID-19 male employment was far greater than female. However, in the subsequent months, women’s chances of holding on to their jobs or to enter the job market have been significantly lower than men’s. Now that unemployment is soaring, all evidence points towards worsening of the gender gap.

Added to this is the worrying feature that the gap in time spent on domestic chores has widened compared to the pre-pandemic months, as my research shows.

There are global reports of the shadow pandemic of domestic violence marching in step with the disease and lockdowns. Indian data is released with a lag; therefore, we don’t have hard numbers on domestic violence, but there is no reason to believe that India would be an exception to the global trend.

As the pandemic forges ahead with ferocity, claiming innumerable lives and livelihoods, it is also rolling back the precarious progress on gender equality and making the road towards the goalpost even thornier than it already was.

This article was first published in The India Cable.