As COVID-19 Raged, the Shadow Pandemic of Domestic Violence Swept Across the Globe

Restrictions on mobility and loss of economic opportunities necessitated by the COVID-19 lockdowns have resulted in a significant rise in domestic violence cases across the world. India saw a 100% jump in the number of victims seeking help during the lockdowns.

India currently ranks 131 among 189 countries, two points down relative to the previous year. While India’s ranking is a disappointment, the most shocking takeaway from the HDR 2020 is related to intimate partner violence (IPV).

For the reference period of 2005-2019, the IPV or the domestic violence (DV) data is present for the majority of the countries, making it possible for us to identify the prevalence of DV across countries. Beyond that, this article also explores the exacerbating implications of the COVID-19 pandemic on DV.

Figure 1 captures the prevalence of DV across the top 10 countries with the highest value of HDI (Norway to Denmark), high HDI (Trinidad and Tobago to Mexico), medium HDI (Kyrgyzstan to India) and low HDI (Benin to Togo).

It is remarkable to note that irrespective of HDI ranking, DV is widely prevalent across countries. 27% of the women in Norway, which is ranked one on HDI, are estimated to have faced intimate partner violence. Ireland, Iceland, Germany, Sweden, Australia, Netherlands and Denmark (countries with the highest value of HDI) have 15% to 32% prevalence of DV. This is not much different for the top 10 high HDI ranked countries (25-30%), and medium HDI ranked countries (14-29%). The low ranked HDI countries have a slightly higher range than the previous three categories (17-50%).

Figure 1: Prevalence of Domestic Violence across Countries* (Women aged 15 and above who experienced intimate partner violence in percentage) 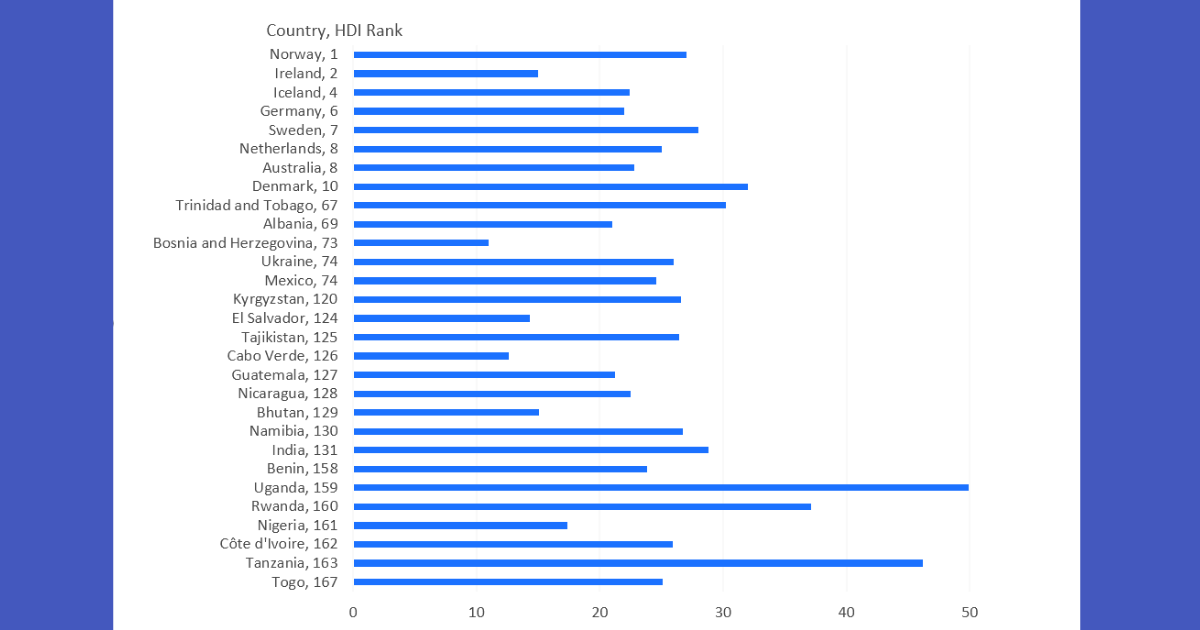 Focussing on India and its neighbouring countries, one notes that the DV in India is prevalent at 29%. It is the lowest for Bhutan (15%) and highest for Bangladesh (54%) in our immediate neighbourhood. Pakistan has registered slightly lower DV than India (24.5%) (see figure 2).

Figure 2: The association between HDI ranking and the prevalence of IPV or DV. The blue line is the fit along the scatter plot 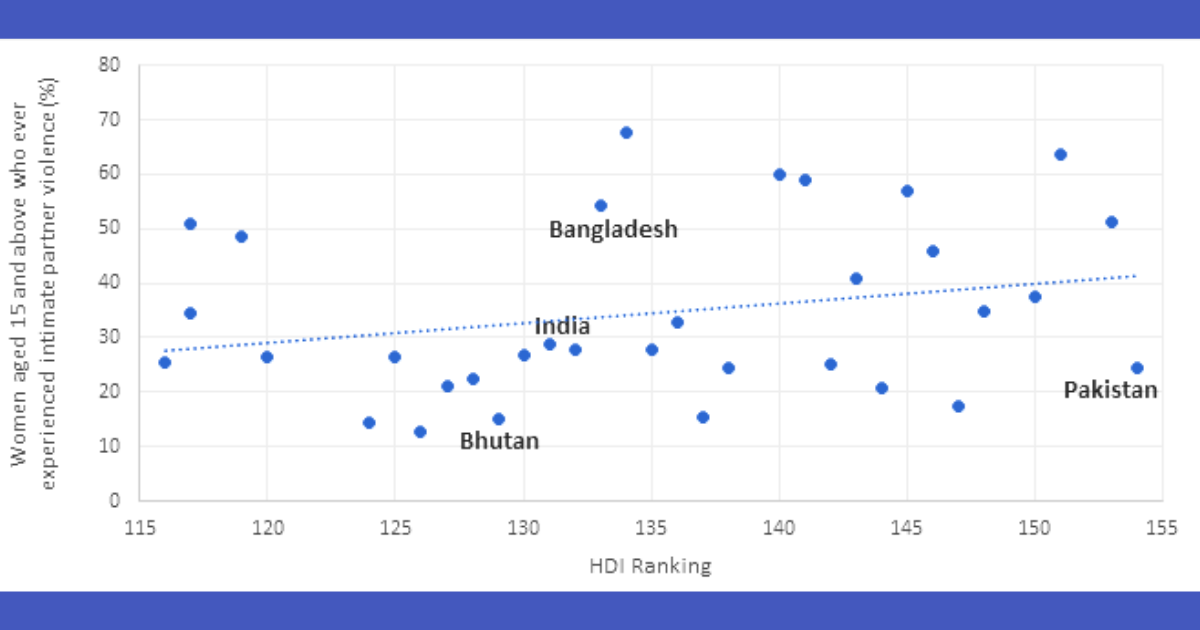 The COVID-19 pandemic and the related restrictions on mobility have aggravated inequities (loss of employment, reduced quantity and quality of dietary intake, etc). One of the most pervasive gender-based consequences is the rise in DV.

For example, a study has demonstrated that there was a positive association between adverse labour outcomes, like the rise in unemployment, and the perpetuation of abusive behaviour during the Great Recession in the late 2000s.

Men often feel the loss of status in the household due to the diminished role of an economic provider, which leads to venting out the frustration on their partners. Also, COVID-19 has led to enhanced consumption of alcohol, which is associated with higher IPV.

Further, isolation of women – along with reduced financial independence, constraints placed on accessing people and resources in seeking help – is bound to increase the incidence of already widespread DV as revealed by the HDR 2020.

The reports of increasing calls for help and requests for relief shelters have risen rapidly. For instance, there is a 30% rise in emergency calls related to DV in Cyprus, 40-50% in Brazil, 60% in the European Union,  and a 100% rise in India. DV is often an under-reported crime, hence the actual figures could be higher than what the present estimates suggest.

While the pandemic of COVID-19 is being managed by following necessary protocols, such as frequent testing, social distancing, isolation and intensive health care treatment, the shadow pandemic of DV is far from being effectively managed.

Availability of 24/7 instant counselling, rehabilitation and access to mental health services in the shelter homes should be classified as essential services. Akin to the national campaigns on COVID-19, the government can utilise several mass communication platforms to enhance awareness about the resources accessible to the victims of DV.

Linking the present crisis-reporting phone services with SMS or WhatsApp might make it easier for the victim to report the incident in case they are afraid that their phone call might be heard. Advertising campaigns can be aired that emphasise the importance of sharing domestic responsibilities, as well as disseminating the consequences of DV on the perpetrator.

Subverting the normalisation surrounding DV, communities should be actively engaged to arrest the rising incidents of DV. For example, the ‘Bell Bajao Andolan‘ in India encourages neighbours to bang doors, ring bell and make noise to let the perpetrator know that he is being looked over.

Witnesses can be incentivised to report the incidences of DV by making their complaints anonymous. In France and Spain, the governments recognised that despite all their efforts the victim might still be unable to report and seek help, and hence developed a codename for DV called “mask19”. The pharmacists were trained to offer instant help to the women who asked for “mask19”. The police personnel, often the first responders to help the women, need to be trained to ensure that the perpetrators are not just sent off with a warning and that women’s DV complaints are treated with high priority.

Most importantly there is an urgent need to recognise DV as a silent pandemic by the national governments. There was no mention of the allocation of extra funds to arrest rising DV cases either in India or across other nations in the world, when economic stimulus packages were announced to tide over the crisis created by the pandemic.

It is important to recognise the economic costs of this silent pandemic to enable governments to bring in a separate budget during stimuli packages to address the issues concerning DV. For instance, before the pandemic, it was estimated that restricted participation of women in the labour market due to physical and mental trauma caused by DV will cost the world economy USD 1.5 trillion. This figure is bound to rise with the increase in the DV cases and impose an even graver economic cost.

* It is important to keep in mind that reference period for the DV statistics is 2005-2019. This implies that the data for different countries was collected in different years. There is also variation across countries in terms of data collection methodology and sampling women (ever-married or ever-partnered).

Payal Seth is a consultant at Tata-Cornell Institute, Cornell University, USA, and a PhD Scholar at Bennett University.