CPI(M), BJD, Others up the Ante as BJP Drags Feet on Women's Reservation Bill

The Bill will guarantee one-third reservation for women in the Lok Sabha and the state legislative assemblies. 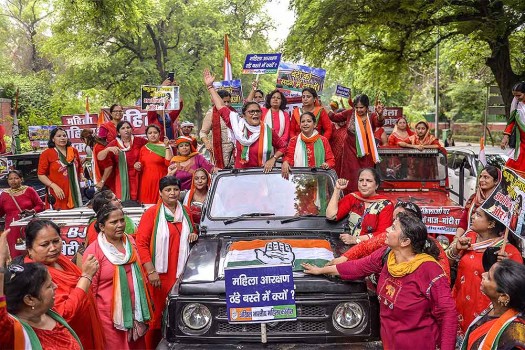 All India Mahila Congress workers, led by Sushmita Dev, raise slogans as they take out a jeep rally to protest against the centre over the passage of Women's Reservation Bill in Parliament, in New Delhi in July 2018. Credit: PTI

New Delhi: The demand to pass the long-pending Women’s Reservation Bill in the parliament seems to be gathering political steam as the 2019 general elections near. After the Biju Janata Dal and the Congress, the Communist Party of India (Marxist), too, has thrown its weight behind the Bill.

On December 28, P.K. Sreemathi Teacher, CPI(M)’s MP from Kannur, Kerala, pulled up the Union government for ignoring the issue even as it claimed to be addressing women’s issues. In her zero hour intervention in the Lok Sabha, she demanded that the Bill be passed immediately.

The CPI(M) also got support from multiple parties including the Congress, the BJD and the Telangana Rashtra Samithi (TRS). Following the Lok Sabha session, the Left party MPs also staged a protest outside the parliament over the issue and addressed the press at Kerala House in New Delhi. Before the House met in the morning, the CPI-M members also protested in the Parliament house complex in support of the Bill.

The discussion around the Bill, which will guarantee one-third reservation for women in the Lok Sabha and the state legislative assemblies, comes at a time when the Bharatiya Janata Party-led government has been gloating over the passage of Triple Talaq Bill in the parliament. The opposition raising the demand at the moment seems to puncture the government’s claims of being women-friendly.

“Women’s presence in Lok Sabha remains 11.7 per cent and 11.4 per cent in Rajya Sabha. The state assemblies display a similar gender imbalance. As speaker, you have also spoken in defence of the Bill, including women’s rights to minimum representation in the highest decision-making bodies,” Teacher said. 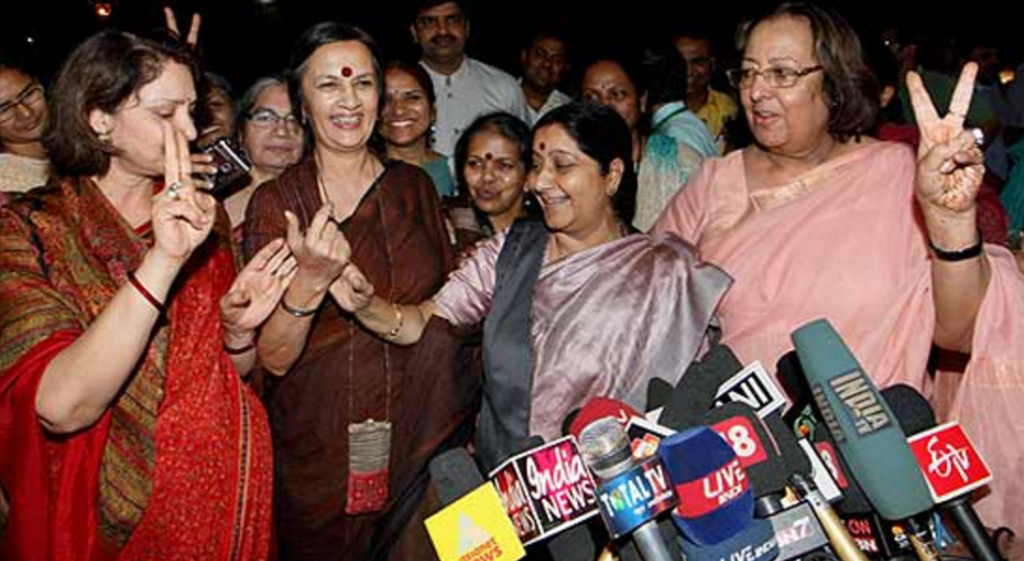 File photo of the then leader of the opposition in the Lok Sabha Sushma Swaraj with BJP leader Najma Heptullah and CPI(M) leader Brinda Karat celebrating the women’s reservation Bill being passed in the Rajya Sabha. Credit: PTI

“We make an appeal for a Bill on this issue that has been pending for over 20-25 years. I request the prime minister and other ministers to pass the Bill immediately,” she added.

BJP MP Bhartruhari Mahtab stood up in support and reminded the members that the Naveen Patnaik government had recently got a resolution in support of the Bill passed in the state assembly. Subsequently, the Odisha chief minister also wrote a letter to Prime Minister Narendra Modi to take immediate steps to pass the Bill.

“Our chief minister (Naveen Patnaik) has written letters to the presidents of 27 political parties and the chief ministers seeking their support for the passage of the Women’s Reservation Bill. I support what Teacher has said and request you to find time to have discussion in this session,” he said.

A.P. Jithender Reddy of the TRS, too, supported it and demanded that the Bill be passed at the earliest.

Earlier this month, Congress president Rahul Gandhi too had written letters to all Congress chief ministers across the country to have a Odisha-like resolution passed in the respective state assemblies.

In the run up to the elections, the Women’s Reservation Bill is likely to become one of the most significant issues to be discussed.

The Constitution (108th Amendment) Bill, commonly known as the Women’s Reservation Bill, was introduced in the parliament in May 2008 by the United Progressive Alliance (UPA) government. The Bill was passed in the Rajya Sabha in 2010 but lapsed after the dissolution of the 15th Lok Sabha in 2014.

The BJP – in the opposition then – had supported the Bill in the upper house. It had also promised to pass it if it came to power. However, the Modi government has pushed the issue to the backburner by not initiating any discussion on it.

The Samajwadi Party, the Rashtriya Janata Dal, and the Janata Dal (United) were among some of the prominent parties which had opposed the Bill.