Vadgam MLA Jignesh Mevani launched the Maasik Jodey Maitrata campaign to destroy the stigma associated with periods. The Vadgam Vikas Samiti distributed reusable sanitary pads to girls as a part of the initiative. 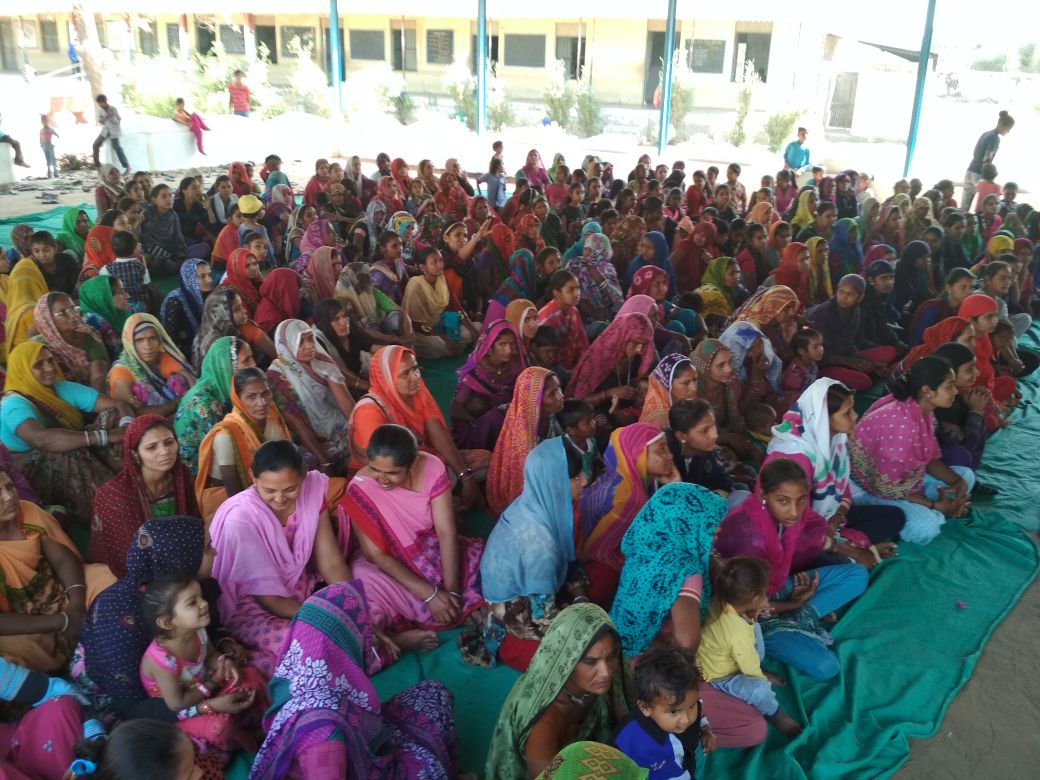 A feminist revolution broke out in rural Gujarat’s Vadgam, a Dalit constituency, on the occasion of International Women’s Day on March 8. Hundreds of women from this constituency took charge of their menstrual health that day and this topic of social taboo was discussed in an open forum.

Its firebrand MLA Jignesh Mevani led a rally last year to Una, where Dalits were flogged for skinning cow carcasses. He also took up several people-oriented protests, including his recent detention for protesting against the government civil hospital in Dahod, a tribal district in Gujarat, being transferred to a pharmaceutical company on a private-public partnership.

While launching the Maasik Jodey Mitrata or the Befriending Menstruation campaign, he said it was “a tribute to the women who actively participated in my election campaign and voted me to power. Several of them observed fast and roza to see me through the elections. I certainly owe it to them.”

“Girls in this constituency, like elsewhere, have faced far too many problems. I will ensure that every school has separate toilets for girls,” said the gender sensitive people’s representative. This progressive, young MLA, who is also an advocate, has faced strong opposition from the ruling classes, including detention by the anti-insurgency forces, Special Operations Group, for merely taking strong steps.

Mevani felt that far too many taboos are imposed upon women, particularly during their monthly menstruation and at the pregnancy stage. The caste-ridden society considers menstruating women and girls as ‘impure’, excludes them from normal life during their monthly periods and confines them to a room. He found this discrimination very bizarre. Women are also compelled to use discarded or coarse cloth which often creates health problems.

“By launching our initiative, we have started [a] dialogue on this crucial issue. We have launched cost-effective sanitary pads, which will be manufactured in our villages,” he said.

Bharkawada village, in the vicinity of the national highway to New Delhi, with a progressive and positive woman sarpanch, Manjula Parmar, was selected for this pilot project. Her supportive husband helped in promoting the programme. She proudly displayed the eco-friendly sanitary pad. “We distributed one each only to young girls as we fell short. We never expected over 300 women to attend the programme. The washable pads can be re-used for one year,” said the jubilant sarpanch.

“Jigneshbhai presented our village with two sewing machines to enable us to stitch these pads. Along with the government’s ten sewing machines, [this] will facilitate our women sew the pads themselves,” said the delighted Manjulaben. “Our women will be trained to sew them.” 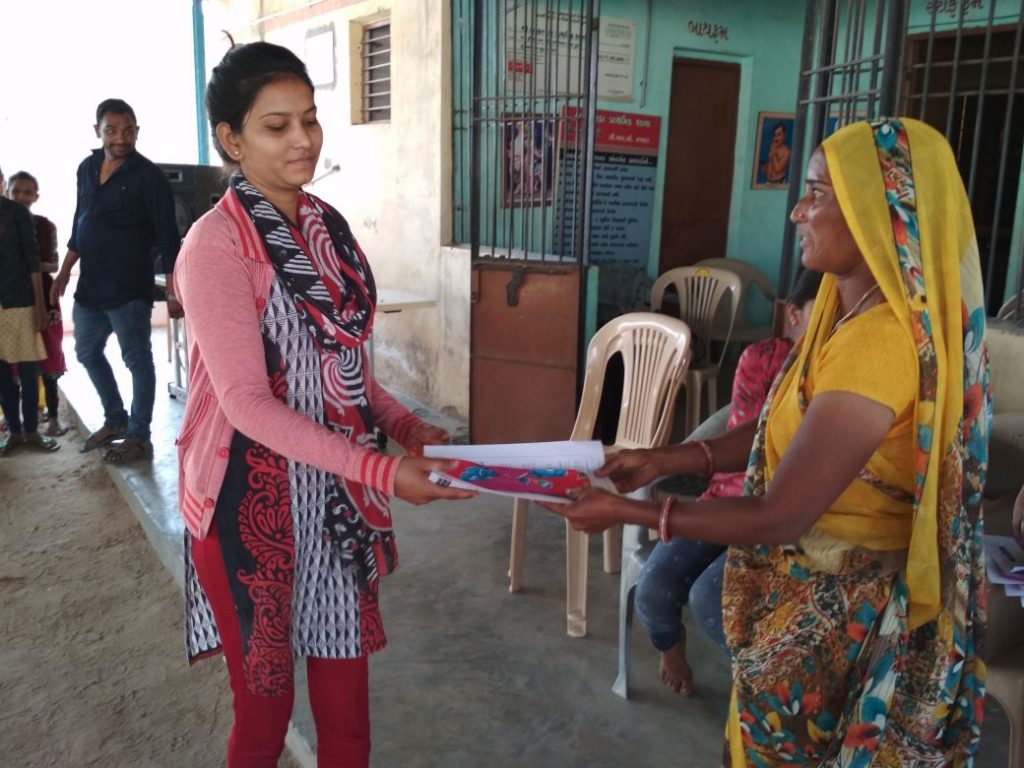 A member of the Vadgam Vikas Samiti presents Manjula Parwar, the sarpanch of Bharkawada, with a sanitary pad. Credit: Priyanka Jain

Kailasben, a young  tailor in the village, was very happy with the sanitary pads. “They are very easy to stitch. I can stitch many [pads] provided I can procure the fabric,” which she said was not available in the local market. “We have to look for alternatives. Our women can surely stitch them,” she added.

Meena, Shital and several other girls of the village were all smiles. “We never imagined having such comfort during trying times. We will cherish this day as our best.” They did not think it was possible that men could actually understand their problems. That such sensitive issues were discussed in an open forum empowered them.

Vadgam Vikas Samiti, the local organisation working towards development in the area, also worked on this project for women. Rashtriya Dalit Adhikar Manch, the organisation set up by Mevani, spent around Rs 40,000 for this pilot project. This included two sewing machines, each costing Rs 14,000.

“Why can’t the government, which tom-toms of ‘development’, take up such important development works?” Mevani asked. “We shall [conduct] dialogue with people and get financial resources for these crucial programmes in our villages.” he added.

During their survey of the villages, the Samiti “found that women used a synthetic duster type of cloth for their monthly periods,” said Priyanka, who is a part of the Samiti. “We were horrified as these fabrics can create serious health problems. Besides they were strewn all over the fields, as they do not have any garbage disposal facilities.”

After a lot of research, they found eco-friendly sanitary pads from south India and got 150 of them couriered to the village. “We never imagined such an overwhelming response.”

A doctor from the Palanpur Civil Hospital, the district headquarter nearby, cleared all the women’s doubts. “Menstrual periods are a natural process for every women, which enables you deliver children. How could you be labelled impure in that case?” she asked them.

Bhavna Ramrakhiani, who has also participated is Mevani’s other programmes, found the dialogue in this remote rural area very revolutionary.”We challenged patriarchy in this remote village, where the tabooed topics were voiced in the presence of men of all ages and a doctor discussed sensitive feminine issues. Sanitary pads, a taboo, were also distributed in their presence. This enabled the men to participate in the problems faced by women. An attempt to break these taboos began here.”

“Women shy away from drying their menstrual cloth in the open and hide them. They are often found stocked in terribly unhygienic locations of  their homes,” she rued. The doctor’s explanation of the dangers of using unhygienic fabrics empowered them. 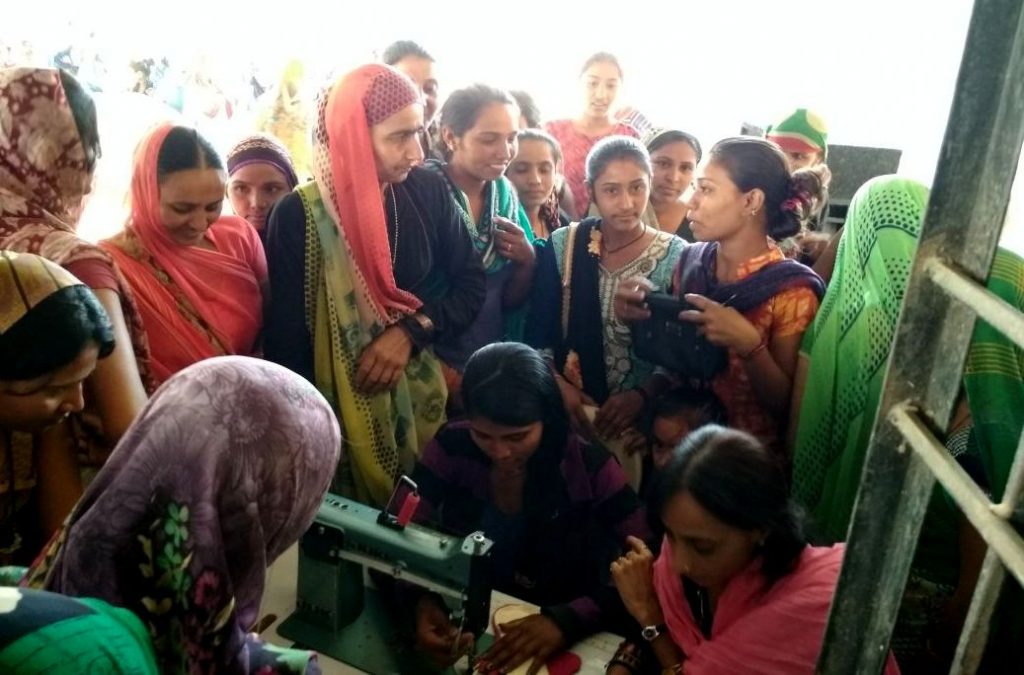 “We shall expand this programme to all the villages of the constituency,” Bhavna said. She was confident that good cotton fabric could be accessed locally. “This area has a history of weaving. Kanodar, a village in the vicinity, exported cotton to Dhaka during the Mughal period. The famed muslin was then woven there. We shall revive weaving cotton in these villages which has several vankars, (weaver community). It will be a good source of livelihood for the local populace,” she said.

Despite the programme being a very positive, progressive and a pioneering initiative, a few people cast aspersions on it. Romel Sutaria, an activist working primarily with tribals in south Gujarat, ridiculed Mevani on social media as the ‘Padman’, who was merely aping the film by the same name.

Mevani was very upset to get such negative reaction from a compatriot. “I can’t comprehend such reactions from a comrade!”

“Why does Romel not look into the multifarious problems faced by tribals in his area? Our experience in a tribal village in this constituency was horrendous. They faced tremendous economic problems. In fact we dread  implementing this programme there,” Bhavna retorted.

Feminists and women’s groups are very happy with the programme. Such a people-oriented programme has probably not been executed anywhere in our country most of them said.

This chaudasia or progressive constituency can certainly boast of such pioneering feminist revolution!

Tanushree Gangopadhyay is a Gujarat-based journalist