Armed With Wit and Humour, Pakistani Women Take to the Streets for 'Aurat March' 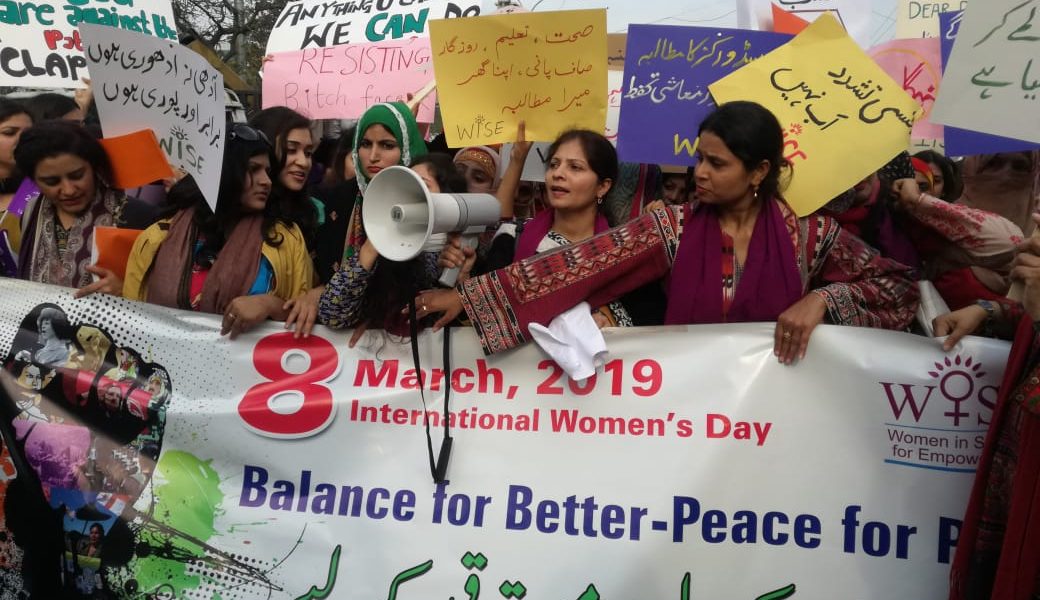 Lahore: In recent times, many have thought of a ‘feminist’ as being a woman who is humourless, dry and rabid – which is why they have distanced themselves from being labelled such. However, the March 8 ‘Aurat March’ across various cities in Pakistan showed a completely different picture.

The celebratory and triumphant spirit of the women’s march strongly reflected in the placards and slogans being carried.

The rally, organised by a collective called ‘Hum Aurtain,’ was unexpectedly huge, and held in different cities – Karachi, Lahore, Islamabad, Peshawar and Hyderabad.

In Karachi, women gathered outside the Frere Hall, dancing and singing, holding placards, while a bike rally took off in Hyderabad.

In a historical occurrence, a lawmaker from the Hindu community, Krishna Kumari Kolhi chaired the Senate meeting in Islamabad in honour of Women’s Day. Kumari is Pakistan Senate’s first Thari Hindu woman and has also made it to BBC’s 100 Women 2018 list.

The rally was perhaps the most dynamic in Lahore – starting from the Lahore Press Club and ending a few kilometres away inside the Al Hamra Arts Council, where participants gathered for performances and speeches. 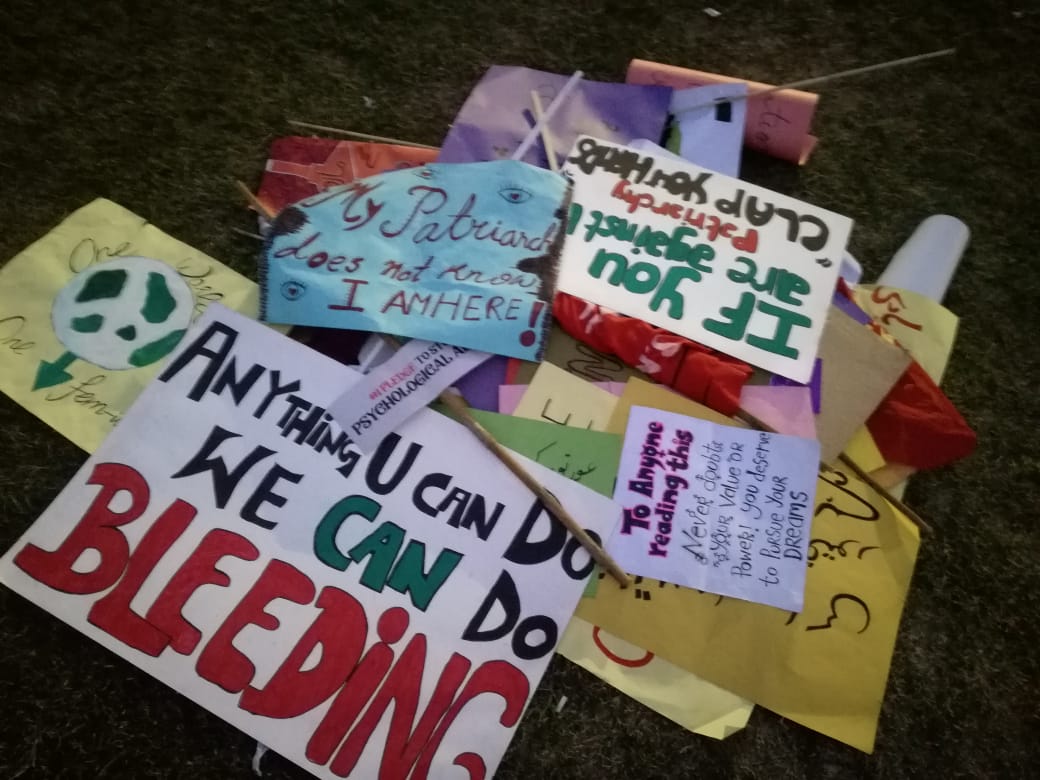 Similar ones were taken out in other places.

But most interesting were the placards that women help up.

Masks made of Qandeel Baloch’s face were worn at the back of heads and even bolder messages surfaced, including those themed around menstrual and reproductive rights: “Anything you can do, we can do better bleeding”, said one. “If only people were as disgusted by oppression as they are by periods”. More norms were challenged in “Divorced and happy”, and “Women are not baby making machines”.

Also read: What Women’s Day Was Supposed to Be About, and What It Became

Then there were the more sedate messages. Five coffins were placed at one end of the park, with chilling signs stuck to them. ‘Honour Killing’, Transgender Killings’, ‘Child Victims’, ‘Domestic Workers/Polio Workers murdered’, and ‘Domestic Violence’ – a reminder of why women are killed every day. 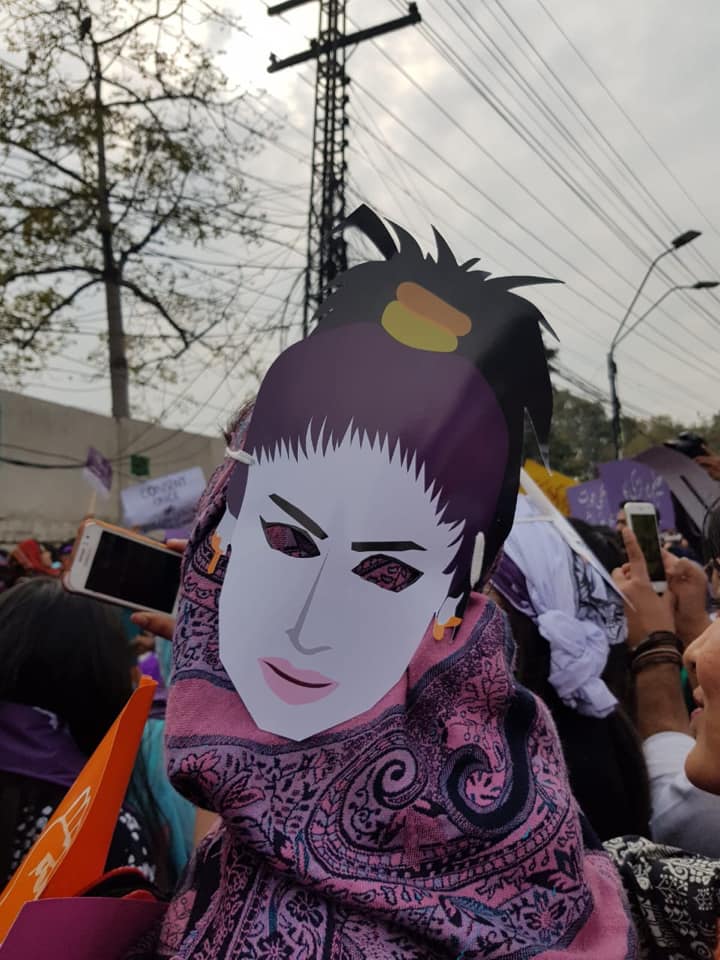 “Yeh hum gunnah gaar aurtain hain, jo ehl-e-jabba ki tamkanat se na roab khayen” said one placard. (It is we sinful women who are not awed by the grandeur of those who wear gowns). Even the play on “Aaj waqi maa behen aik ho rahi hain”, could not take out the serious side of the message.

But it wasn’t just women out there. The transgender community was also present, as well as men, who held up messages – some of the freedom for women, others for the respect that transgenders deserve. “My gender is in my head not between my legs” was a powerful one. A male participant of the march held up a sign saying, ‘She did not come from my rib, I came from her vagina’, while another one said ‘Main ne bohot bol liya ab inn ki sunain’, gladly making way for women to take charge.

But the Aurat March was not just about holding up signs and making a lot of noise on a designated day of the year.

According to the ‘Hum Auratain’ collective manifesto, there was no NGO or corporate funding and no political party alliance.

It demands economic justice including implementation of labour rights, the Sexual Harassment Against Women in the Workplace Act 2010, recognition of women’s input to the ‘care economy’ as unpaid labour and provision of maternity leaves and day care centres to ensure women’s inclusion in the labour force. It also demands environmental justice.

Women’s right to climate justice and resilience must be recognised and ensured, it said, access to safe drinking water, safe and clean air, protection of animals and wildlife, including cessation to culling of stray dogs, and ensuring and protecting women’s food sovereignty, and recognition of women’s participation in production of food and cash crops. 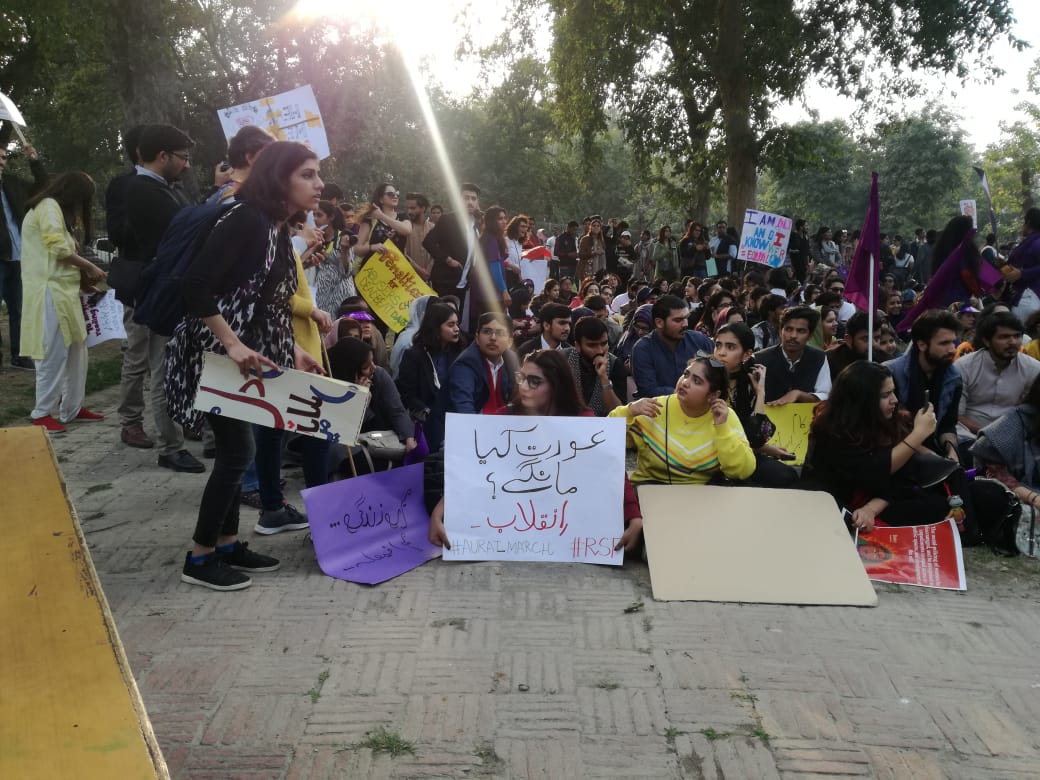 Using it as another occasion to resist war with India, women made speeches and discussed how important it was to maintain peace in South Asia. As one poster put it: “MEN: Make Chai Not War, WOMEN: Make policy not chai!”, “Women against WAR” and “No One wins a War”.

“These are not just messages you know,” said one of the demonstrators. “These are things that can be done – that should be done for that is the only way forward.”