In an interview to Karan Thapar, Moeed Yusuf confirmed that Indian and Pakistani “intelligence meetings” happened in the run-up to the February re-confirmation of the 2003 ceasefire. 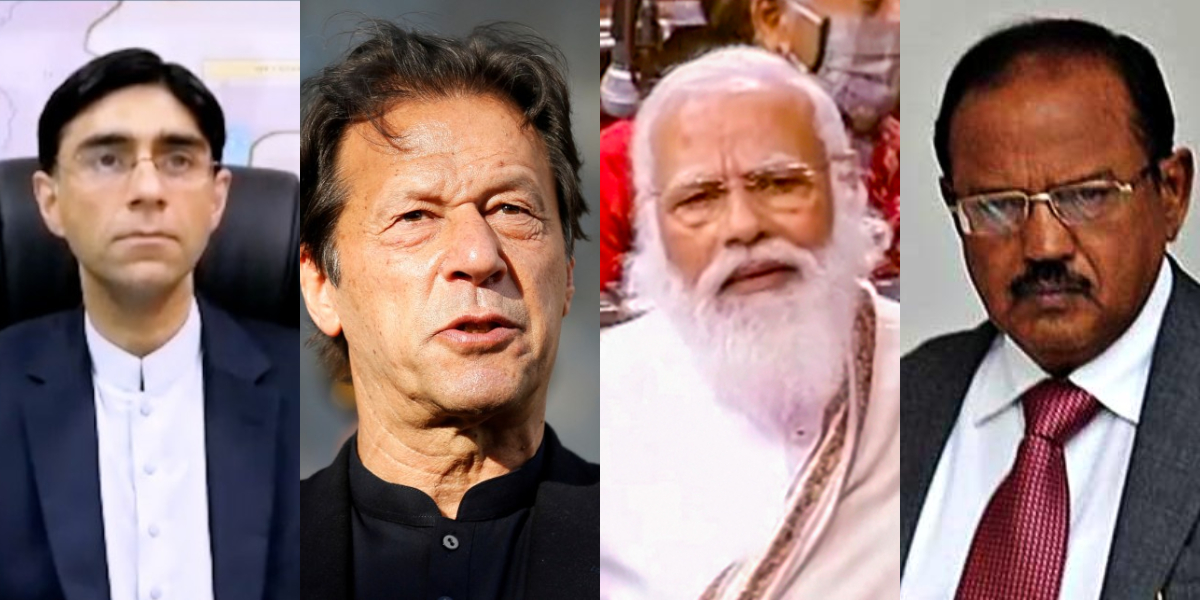 In an interview where he often says things that seem contradictory or at variance with earlier statements, Pakistan’s National Security Advisor Mooed Yusuf has at least two or three times said that the window of hope and expectation in India-Pakistan relations, that opened in February with the reconfirmation of the 2003 ceasefire, “is perhaps still there”, provided India is willing to create a conducive environment.

Mooed Yusuf said this in an interview where he also claimed that Pakistan has “concrete evidence and intelligence” connecting the recent Lahore bomb blast outside Hafiz Saeed’s residence to “handlers and masterminds in India”, which Pakistan will make public in a dossier “at the right time.”

The 75-minute interview with Karan Thapar for The Wire starts by exploring how and why, in six months from February to June-July this year, India-Pakistan relations have swung from hope and expectation, when the 2003 ceasefire was re-affirmed in February, to mutual accusations of terror in June and July. The last 15 minutes are on the developing situation in Afghanistan and whether Pakistan will recognise a Taliban government formed after a military take over of the country. Yusuf says Pakistan “will do what the rest of the world does”. Asked if Pakistan would welcome a Taliban government, he initially says “no” but then adds it has “no favourites” and it’s for the Afghan people to choose their government.

In The Wire interview, Yusuf confirmed that Indian and Pakistani “intelligence meetings” happened in the run-up to the February re-confirmation of the 2003 ceasefire, but he would not say whether “they” happened in Dubai as some reports claim. He called the meeting contacts and not a back-channel. He also suggested there could have been more than one meeting and in more than one form, i.e. physical or virtual. He refused to say who was there from the Indian side “because if I was to be brutally honest it would reveal who calls the shots in India”. Nor would he confirm if the ISI chief represented Pakistan. However, Yusuf denied he had met his Indian counterpart Ajit Doval although he seemed to twice evade an answer when asked if Doval had met General Qamar Bajwa, the Pakistan Chief of Army Staff.

Yusuf told The Wire “there was a contact made” by the Indian side. He said Pakistan reciprocated and asked what is India willing to do and if India is sincere Pakistan is also willing to move forward.
Asked by The Wire about reports suggesting third parties like the UAE and Saudi Arabia had played a role in bringing about the reconfirmation of the ceasefire, Dr Yusuf seemed to confirm them when he said, “I have a sense pressure was put on India.” However, he refused to name any country or even comment on the public admission by the UAE’s ambassador to the US that his country had played a role. Yusuf said whilst Pakistan had no problem with third party involvement, it was for India to reveal further details.

Yusuf accepted as true newspaper reports (such as in Dawn) that said Pakistan’s Chief of Army Staff General Bajwa had told Pakistani journalists at an iftaar gathering in late April “the two sides had agreed that rather than ‘Kashmir first’ or ‘terrorism first’ all issues should be addressed at the same time.” Gen Bajwa also said Pakistan considered reinstatement of Article 370 a non-issue because Pakistan has never recognised this article of the Indian constitution. General Bajwa said Pakistan’s concerns were with statehood and the demographic identity of Jammu and Kashmir. Yusuf confirmed that when Pakistan Prime Minister Imran Khan and General Bajwa spoke about India creating a conducive environment, this is what they had in mind.

In The Wire interview, Dr Yusuf said Pakistan had two core concerns. First, Kashmir. The second is terrorism. He made a point of saying it is a wrong narrative to claim terrorism is India’s concern. He called it Pakistan’s “core concern”.

In the interview, Yusuf claims Pakistan has the identity and phone numbers of the mastermind and handlers of the recent Lahore bomb blast and claims they are in India. But he refused to give further details. He said they will be made public “at the right time.”

However, despite this, Yusuf repeatedly suggested the window of hope and expectation that opened in February was not completely closed. First, whilst discussing the trade setback in April, when Pakistan thought of but did not buy cotton and sugar from India, he said he didn’t know “whether things unravelled” because of this. Then, whilst giving details of India’s alleged role in the Lahore blast, he said “perhaps it (the window) is still there if India is prepared to do the fair thing by Kashmiris”.

Right at the end of the interview, when asked specifically if the window for dialogue is open or closed, Yusuf said” “my honest wish and hope is that it is open” adding “India has to create an enabling environment” and “when it does it will find Pakistan willing”.

Yet at the same time, Yusuf also voiced what he called fundamental concerns about the sort of country India has become or is becoming. He said: “We are struggling to understand whether this is a country you can have a rational conversation with.” However, he did add, “I want to be proven wrong”.

The 75-minute interview also has an extensive section on Afghanistan. This section covers questions about whether Pakistan welcomes a Taliban government, will recognise one that comes to power after a military takeover, accusations by the Afghan president and vice-president that Pakistan is militarily helping the Taliban and the claim made by PM Khan that if the Taliban militarily takes over Afghanistan, Pakistan will seal the border. This section also includes questions about whether Pakistan can ensure a Taliban-ruled Afghanistan does not become a sanctuary for terrorist groups like Lashkar-e-Toiba, Jaish-e-Mohammad, Al Qaida and ISIS. Finally, it includes a question about whether Pakistan foreign minister S.M. Qureshi’s claim that India’s involvement in Afghanistan is “larger than it ought to be” means Pakistan will urge a future Taliban government to reduce or eliminate India’s presence diplomatically and economically. Please see the interview for Yusuf’s answers.

The above is a paraphrased precis of Mooed Yusuf’s 75-minute interview to Karan Thapar for The Wire. Though recounted from memory, it is not inaccurate. However, there is a lot more in the interview than this precis has touched upon. This is particularly true of the section on India-Pakistan relations from February to July this year. Please see the complete interview to get a fuller picture of this part of the discussion.