Admiral (Retd) Arun Prakash tells Karan Thapar that there should be outright condemnation and firm action against the speakers at the Haridwar Dharma Sansad. 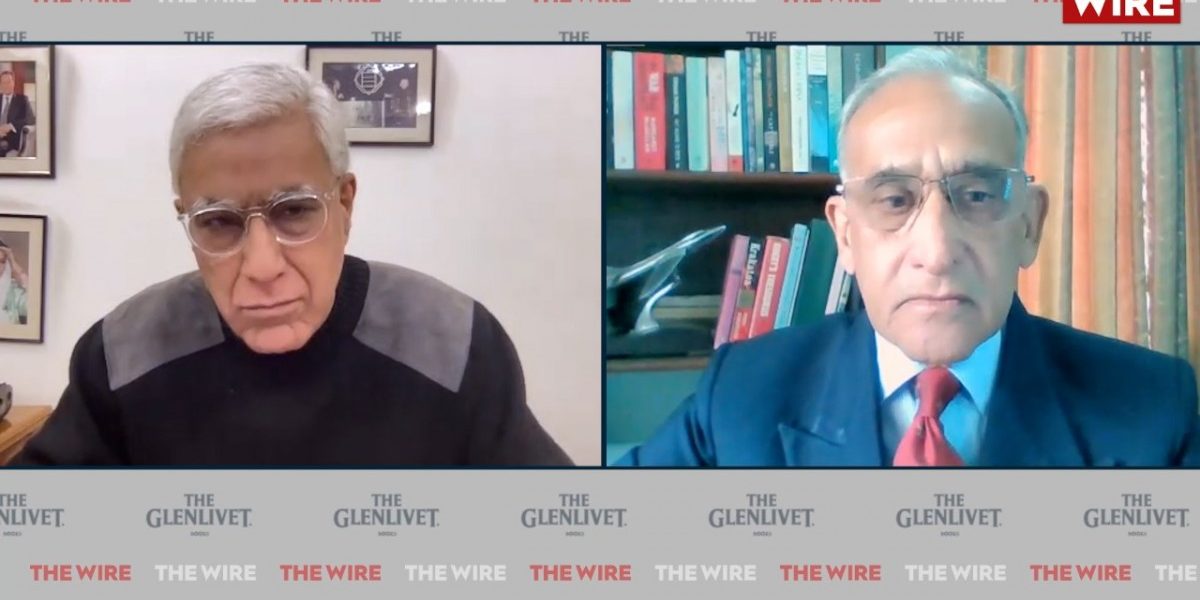 In an interview that delivers a firm and blunt warning but also raises disturbing questions, Admiral Arun Prakash, one of India’s former Navy chiefs and a former chairman of the Chiefs of Staff Committee, has said the silence from the country’s political leadership after calls for Muslim genocide and ethnic cleansing were made at a Dharma Sansad in December in Haridwar is “ominous … (and) there should be outright condemnation and firm action”. Admiral Arun Prakash said if this continues “there’s bound to be a counter” and “the next step could be conflict”. Asked if this meant India could face a civil war, Admiral Prakash replied: “Yes, indeed” and asked, “Do we want that?”

In a 30-minute interview to Karan Thapar for The Wire, Admiral Prakash, who along with three other former Naval chiefs and a former Indian Air Force chief, was a signatory to an open letter addressed to President Ram Nath Kovind and Prime Minister Narendra Modi on December 31 about the Dharma Sansad’s calls for genocide and ethnic cleansing, was asked if there has been a reply from either. He  replied, “None so far (and) it’s futile to expect one.” Admiral Prakash also said there’s not even been an acknowledgement of the letter. He added: “The least one expected was an acknowledgement.” Asked if this implied discourtesy he said: “It would be par for the course.”

In the interview, Admiral Prakash also raised serious and disturbing questions about the fact that not a single former Army chief was willing to sign the letter.

Speaking about the silence of the political leadership, Admiral Prakash asked: “Does it signify tacit approval?” He said it is “extremely disturbing”.

In the interview to The Wire, Admiral Prakash discussed the impact such calls for genocide could have on the three services, particularly the army, all of which have Muslim, Christian, Hindu, Sikh soldiers – in fact, soldiers from all the faiths of the country. He said: “Think what goes on in a soldiers mind? Such talk will send a message of deep disquiet to the armed forces.”

More importantly, he added, the armed forces are “the last bastion of our democracy”. He said a soldier is sworn to fight for the country “unto the peril of his life”. They do not think of religion. They think of the country. Now, when speakers at the Dharma Sansad “made a call to the army … to take up weapons and participate in the cleanliness drive”, they have been asked to focus on religion rather than the country.

Speaking specifically about the Army, Admiral Prakash said these calls for genocide could “upset the unity and cohesion” of the Army.

Admiral Prakash pointed out these calls for genocide will also impact peace and harmony in the country which, in turn, will seriously affect national security. He said India already faces a “two and a half front” threat but now “if you superimpose religious/sectarian fratricidal conflicts, the cumulative threat could overwhelm India’s security apparatus and bring us to the brink of disaster.”

Admiral Prakash added: “Rarely have I felt such a deep sense of dismay and apprehension as I do today … (it’s) given rise to (a) foreboding about the future of my country.”

When pointed out by The Wire that the December 31 letter had been signed by four former naval chiefs and a former IAF chief but not one former Army chief was a signatory – even though the Army is by far the biggest of the three services – Admiral Prakash raised two worrying questions. He said the fact not a single former army chief had signed the letter could either be because they believe the call for genocide and ethnic cleansing is something they agree with or because they are apprehensive – in other words, fearful – of the consequences of signing such a letter. He said, “In either case, it’s something to worry about.” When further asked whether both questions raise worrying concerns about India’s former Army chiefs that will disturb veteran soldiers, serving soldiers and also the wider country, he said he did not want to speculate further.

Finally, Admiral Prakash said it’s a matter of serious concern that a whole month has passed since the tragic death of General Bipin Rawat but the government has not appointed a new Chief of Defence Staff. He said: “It should not take more than a day or two or a week at the most.” Asked if this delay was irresponsible, he said it is “entirely undesirable”. He said it sends a very wrong message to India’s adversaries.

The above is a paraphrased precis of Admiral Arun Prakash’s interview with Karan Thapar for The Wire. There’s a lot more in the interview than has been covered in this precis. Please see the full interview for a better understanding of Admiral Prakash’s viewpoints.