In an interview to Karan Thapar for The Wire, Dr Randeep Guleria speaks about issues such as flattening the curve and when the peak of cases may come. 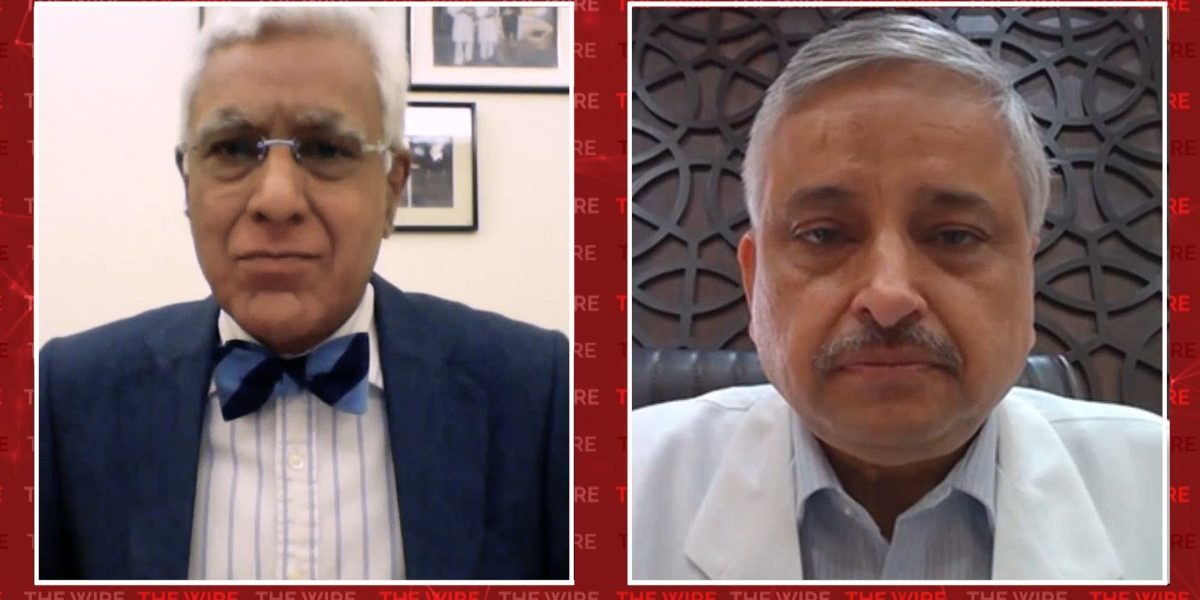 Dr Randeep Guleria, the director of the All India Institute of Medical Sciences, has agreed that it’s too early for India to claim victory over COVID-19. He says, “Till today we have been doing okay, but the fight is still on because the scenario keeps changing and the virus thrives on this.” Dr Guleria added that “the next few weeks and months will be the most challenging the country will ever face.” As an answer to a specific question about Lav Agarwal’s comparison of India’s handling of COVID-19 with that of the 15 worst-hit countries, Dr Guleria said each country works differently and each country has its own problems. He said India needs to concentrate on tackling the situation within our borders and not indulge in claims that we are doing better than A, B or C. However, he added that this comparison could have been made to give the Indian population some reason to be hopeful.

In a 40-minute interview to Karan Thapar for The Wire, Dr Guleria was asked about the mathematical modelling done by the government and announced on Friday which suggests that 37,000-78,000 deaths have been prevented and 14-29 lakh cases averted. Dr Guleria said: “mathematical modelling is a rough guess”. He added that it’s based on assumptions and it’s very hard to say whether they are true or not. He said the ground reality could often be very different. He pointed out that a lot of similar predictions made in the US have gone wrong.

In the interview to The Wire, Dr Guleria admitted that the 4 lockdowns had not flattened the curve. Unlike Italy and China, which saw a declining trend after 40 days of lockdown that is not the case in India. However, he added that the curve is not as steep as the government had feared it would be.

Speaking about reasons why the curve has not been flattened but continues to rise, Dr Guleria referred to what he called citizen responsibility. He said social distancing and self-quarantining was not being observed as successfully as it could have been. He also referred to the return of tens of millions of migrant labour to their villages in India.

However, Dr Guleria said the lockdown had resulted in containing the virus to a few known hotspots. He pointed out that 80% of the cases were in just a handful of cities.

Asked if he was disappointed that India, unlike China, had not been able to flatten the curve during the lockdown, Dr Guleria said the Indian lockdown was not imposed with the same severity as the Chinese and, secondly, India is a democracy which China is not.

Asked whether he stood by his statement (made to Livemint on May 7) that the number of cases in India would peak in June or July or whether, because of the return of tens of millions of migrant labourers to rural India and the substantive relaxing of the lockdown starting May 18, the peak might be pushed back to August or September or possibly later, Dr Guleria said it was better to talk in terms of a peak in specific regions rather than the country as a whole. He said the disease is evolving over time, in different ways in different parts of the country. However, he did not rule out the possibility that there could be fresh peaks in states like Bihar and UP in August or September because of the possibility that millions of returning migrant workers have carried the virus with them.

However, Dr Guleria told The Wire there are other statistics that are of greater comfort to India. He said the mortality rate (0.2 per 100,000 compared to a global average of 4.2 per 100,000) and the fact that only 6.4% of cases in India need hospitalisation and under 0.5% need ventilators, compared to approximately 3% globally, does suggest the disease is affecting India differently to countries like Italy, Spain or America. He said this could be because India has a younger population, because the BCG vaccination is universally given or because the disease has mutated and is less virulent.

Dr Guleria said India does have data that suggests the disease is not as virulent as it is in other countries but this data needs to be confirmed. However, he added that what is true is that a far smaller number of people needed ICU treatment and oxygen than was originally thought. This, he said, is one clear sign the disease is behaving differently in India compared to the rest of the world.

Speaking to The Wire about the way the disease has manifested itself, Dr Guleria said the data does not suggest a big spike in respiratory-related deaths. However, there have been atypical manifestations which had not been anticipated. He mentioned young people getting strokes and heart attacks and a variety of organ inflammation-related problems.

Dr Guleria said there was a need to do more random-based antibody testing, including using the Eliza testing kits as well as serological ones, to establish how large the numbers are of Indians who are asymptomatic carriers of the virus. However, he agreed that whereas earlier the asymptomatic population was a cause of great concern, now, although they could still infect others, it was increasingly believed the chance of being infected by such carriers was a lot less.

This is a paraphrased precis of Dr Guleria’s interview to Karan Thapar for The Wire. Please see the full interview for accurate details.