Despite the fact that the Chandigarh high court and Supreme Court have made it clear that residents cannot be evicted without rehabilitation, the Haryana government still resorted to the demolition of houses. 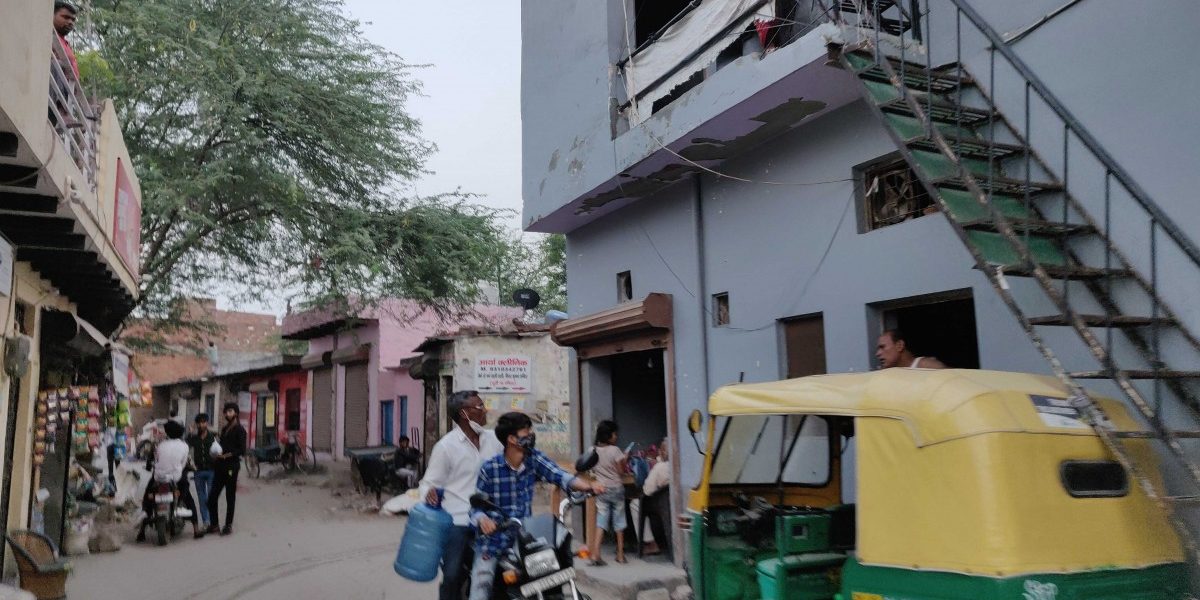 A pukka road and fully constructed houses exist in 'Old Khori Gaon', settled in the nineties.

About one lakh residents of Khori Gaon, Faridabad, at the Delhi-Haryana border, face forced eviction. They have been repeatedly referred to as “forest encroachers”. This article outlines the legal history of two crucial cases of Khori Gaon to show that the eviction of residents en masse cannot be construed as compliance with the law by the Haryana government. Irrespective of the status of the basti with respect to forest land, the residents of Khori Gaon have the right to housing as per law.

The first residents of Khori Gaon basti were migrants from Uttar Pradesh, Bihar, Madhya Pradesh, Jharkhand and West Bengal who mostly worked as bonded laborers at the mines in these areas in the 1980s. From 2000 onwards when the mines were closed, they found alternate employment such as casual labour and daily wage workers in various offices, hotels, malls and gated societies that came up in the vicinity. In 2010, the Municipal Corporation of Faridabad attempted to carry out forced evictions in Khori Gaon on the pretext that it is situated on land regulated by the Punjab Land Preservation Act (PLPA ) regulations and that the constructions of the basti are illegal as they are not approved under forest regulations.

Residents filed few cases before the Chandigarh high court through various organisations, seeking a stay against forced evictions without rehabilitation. In 2016, in the petitions filed by Khori Gaon Kalyan Samiti (CWP 19910/2014) and Khori Gaon Residents Welfare Association (CWP 19148/2010), the high court gave two detailed judgments on rehabilitating the residents as per the policy of Haryana Urban Development Authority dated 10.02.2010. It also desired the Central government to prepare a nationwide Right to Housing Policy. This order should have been further pressed because at that point there was no way to determine who was eligible for rehabilitation.

Also read: Why the Haryana Govt Must Not Evict One Lakh Residents of Khori Gaon

Illegal demolitions by the state government

During these years, the state authorities issued eviction notices to the basti residents. These notices ask for land titles as proof from the residents if they do not want to be evicted. Obviously residents could never provide any land titles because they do not possess any. What they ought to have been asked is to prove their eligibility under the rehabilitation policy, i.e. the proof of their continued residence at the site. This sleight of hand by the state authorities was berated by the high court as ‘per se perverse and cryptic’ on April 25, 2016. The court stated in CWP 19910/2014 that:

“…A bare analysis of the order that has been impugned reveals that findings recorded by the authorities as regards encroachment or possession of the occupants upon the Government land since 2010 are per se perverse and cryptic…The emphasis laid by the authorities that the petitioners had failed to prove their ownership or title over the site was completely out of context, for concededly the land was/is owned by the Department of Tourism and the petitioners were/are the unauthorized occupants thereof. Apparently, the exercise that purports to have been undertaken to determine the length of possession of the occupants and consequently their eligibilities in terms of Clause (iii) of the policy, was/is a farce.

…Each of the members shall be afforded an opportunity of hearing and their claims shall be determined individually.” Even this strong and this rare a rebuke from the high court had no effect on the authorities and they continued to demand to see the residents’ land titles through their notices, thus misleading residents and the courts every step of the way.

After the Supreme Court’s order in February 2020, activists, along with a co-author of this article, a right to housing advocate met the Faridabad SDM and clarified that the Supreme Court order cannot mean that the authorities could demolish the basti without conducting a survey. In September 2020, an application was filed on behalf of the residents which sought a stay against the demolitions until a survey under the HUDA policy is conducted and residents are rehabilitated. This application is yet to be heard by the court and responded to by the Municipal Corporation. But it is clear that the Haryana government seems to have made no sincere efforts towards rehabilitating the residents under its 2010 policy.

In a flagrant violation of the law, the local authorities went ahead with the demolition of 1,700 houses in September 2020 and 300 houses in April 2021.

The demolitions undertaken so far are a gross violation of the legal standards set by the high court and Supreme Court. Evictions cannot be undertaken without proper rehabilitation. The generic notices for demolition continue to be ‘perverse and cryptic’, repeatedly demanding the residents to show up at the SDM’s office with their land ownership titles.

This is both absurd and nasty on the part of the government that clearly aims to cause fear and anxiety among the residents. When all the cases have stated that the residents don’t claim ownership of the public land on which Khori stands, where is the question of people showing up with land ownership documents? As per law, the notices should have asked the residents to provide other “proof of residence” documents because that would ascertain who is eligible under the Haryana policy on rehabilitation. By demanding proof of ownership time and again from the residents who have never claimed ownership to the land, the Haryana government has scared them into letting go of their homes.

After the February 2020 order of the Supreme Court, these faulty notices were issued in March 2020 and June 2021. The March notice came days before the Janta curfew was announced. It gave the residents a grand period of seven days to produce their non-existent ownership documents to the government to avoid losing their homes. 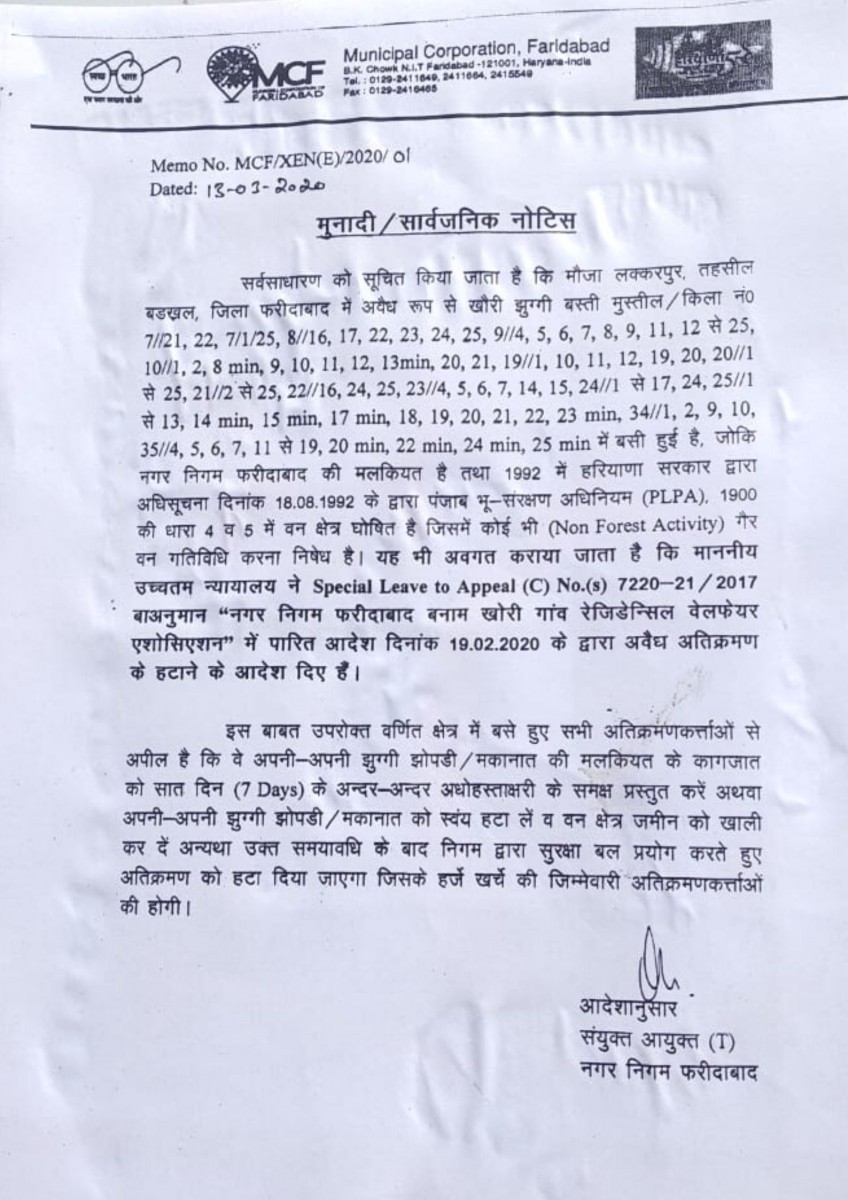 The June 2021 notice gave them one day to vacate the place. The residents have been completely incapable of responding to both these notices because they have been struggling to cope with the effects of the pandemic-induced lockdown. The lockdown to prevent the spread of COVID-19 involved stay at home instructions to all, heavy police surveillance of public areas especially bastis and closure of government offices. The basti residents have suffered COVID deaths, starvation and loss of jobs.

The latest SC orders have emboldened the government authorities that are responsible for the welfare of people to cut off water and electricity to households for a week now. The courts and the corporation envisage this most inhuman and utterly illegal eviction of thousands of families in the time of the pandemic when none of them have other homes to go to and will be unwelcome anywhere due to the fear of the third wave of the pandemic in India.

The Haryana government knows well that it has manipulated the residents and the courts. Now, it must step away from this long contest with Khori residents on humanitarian grounds and move towards decent rehabilitation for them as per law.

Manju Menon is Senior Fellow at the Centre for Policy Research. Choudhary Ali Zia Kabir is a housing rights advocate who has worked on the Khori Gaon court cases.