Honour Aside, What Does the UNESCO Heritage Tag Mean for Jaipur's Future?

'Heritage urbanity' is the newest form of city-making targeted at Tier II cities of India.

The interiors of the walled city of Jaipur. Photo: maria martinez/Flickr (CC BY-NC-ND 2.0) The Walled City of Jaipur was declared a UNESCO World Heritage Site on July 6, 2019. It is the second city in India to achieve this status following Ahmedabad that was given this tag in July 2017. The initial wave of celebratory tweets and media reports is agog with the city’s immaculate 18th century plan, its symmetrical pink coloured façade and the beauty of its havelis and bazaars.

However, it is at this very moment of euphoric legitimation of the city as ‘heritage’ that one needs to take a step back and understand the reason behind the recurrent bestowing of ‘heritage tags’ to Indian cities at such brief intervals by UNESCO. As is well known, UNESCO is a global agency under the auspices of the United Nations Organisation, that evaluates both tangible and intangible aspects of our past and labels them as such.

More recently, in the Indian context, the UNESCO has moved from site-specific identification to naming an entire urban enclave as ‘heritage’.

Also read: Jaipur Is Doing Many Things to Do Well on Swachh Bharat Survey, But Cleaning Isn’t One of Them

What does this entail for the future of urban planning in India and what are the implications of such tags on the economic and political dynamics of Indian cities, which are throbbing with life and precariousness?

As per several studies, most remarkably the one by Centre for Policy Research, Indian cities are marked by inequality in terms of accessibility to social resources and physical assets. This is a common refrain among economic policy makers as well, listing rising unemployment, poverty and decaying urban infrastructure as the major problems facing Indian cities. The new panacea for these issues plaguing the urban areas, especially in the non-metropolitan centres is the rise of heritage-driven development.”Heritage urbanity” is the newest form of city-making targeted at Tier II cities of India. 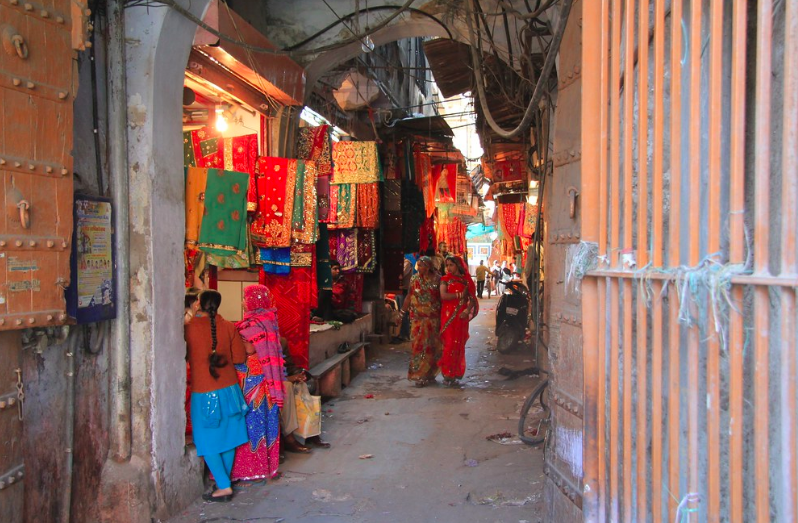 Have Tier II Indian cities suddenly become historic or have their policy makers realised the patterns and politics of global valuation?

The rich history of many urban spaces in India is perhaps undeniable but their recent valuation by policy makers in the interconnected network of global, national and municipal policy makers is unprecedented. Dia Da Costa in her incisive commentary on Ahmedabad’s recognition as a “heritage city” in 2017 observed that the surge in heritage-laden policies was a result of the burgeoning “creative economy” in India, which is seen as a key to generate employment and absorb the unskilled migrant work force which is accumulating in the cities owing to agrarian distress. She rightly points out that “not everyone gets to shape heritage”.

Heritage is defined, articulated and shaped by the new labour force in India, or what many have also termed as “affective labour” of post-liberalised Indian economy, which is English speaking, suave and groomed in soft skills. It is practiced by a select few, who accomplish the task of representing the past, tailoring it for specific purpose. Navina Jafa, a heritage walk leader, thinks of this representation of a culturalscape by heritage practitioners as a kind of ‘”brokering“.

Heritage is therefore generated through practices, technologies and ideologies of the present. In Jaipur’s case, one may delineate three major factors that have come together to generate its new found heritage urbanity. First, forces of investment and funding that are at work globally, undergird heritage urbanity in India. In 2016, the government of Rajasthan launched the Smart City Project in Jaipur. With a population of more than 3 million and a large “urban agglomeration,” the city was chosen for its blend of “heritage and modernism.”

Being a part of the famous tourist circuit of Golden Triangle along with Delhi and Agra, it relies heavily on the tourism revenue. The fillip to tourism has also been a major policy prescription of the state government since the 1990s. At the national level, since the launch of HRIDAY (Heritage City Development and Augmentation Yojana) in 2015, Tier II cities like Jaipur, hitherto marginal in the growth narrative of Indian economy, have been infused with capital and knowledge regimes based on it.

Also read | The Changing Face of Delhi: The Colonial Influence

The international funding networks materialised into what came to be known as Indian Heritage Cities Network in 2006, encouraging partnership between Tier-II Indian cities and smaller European cities, sharing expertise and ‘best practices’, to use policy terminology. These interactions with global funders and so-called experts supplied by them have led to major restructuring of local urban governance, introducing multiple bodies, with overlapping powers. One such organisation, functional in Jaipur since 2005 is Amber Heritage Development and Management Authority, which has been renamed and territorially redefined by changing regimes in the state government.

Secondly, heritage based urban development is a strategy of competitive sub-federalism. The need for branding a city in terms of heritage with seemingly specialised heritage bureaucracies may also be read in terms of municipal bodies seeking revenue from potential investors. In Jaipur, heritage is inevitably linked to tourism development. The Economic Survey of 2016 had characterised the competitive dynamics between urban local bodies as central to economic growth.

A concrete way suggested to achieve this growth was to reassess urban properties. It was underpinned by a belief that the economic potential of hitherto untapped resources could be unleashed through this by inviting private stakeholders in the process of urban change. Old properties are a potential site for such revaluation. 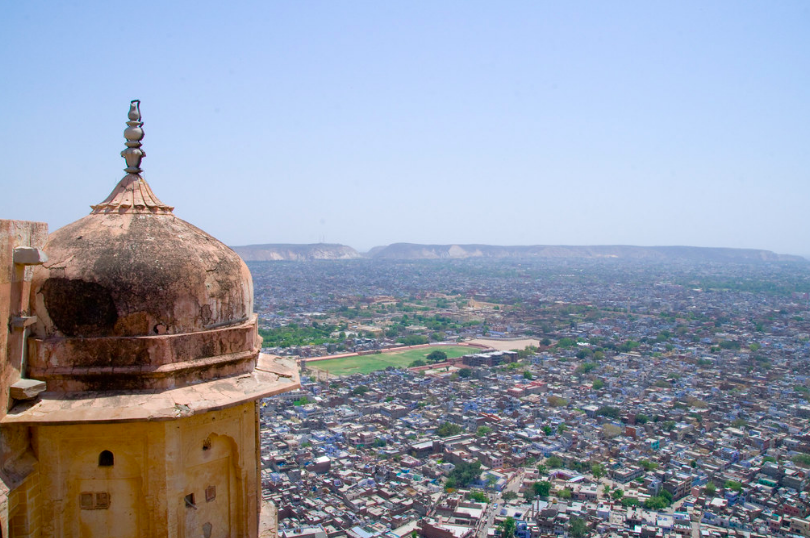 A view of Jaipur from the City Palace. Photo: particlem/Flickr (CC BY 2.0)

In Jaipur, repairs to old houses have to be done as per new regulations to protect its façade. Many old jeweller families of the walled city belonging to the Hindu or Jain trading community have been at the forefront of haveli conservation there. With the paucity of public funds, one either has to channelise private resources or depend on the commercial potential of the restored property. The new Tourism Unit Policy- 2015 of Rajasthan has enabled easy investment in this sector. Hence, there is a mushrooming of small heritage hotels, which would eventually induce ‘gentrification’ of the walled city.

Scholars like James Holston have demonstrated that gentrification leads to displacement of the urban poor from their shelters, which are in turn, colonised by affluent sections. Urban improvements and revitalisation in the name of heritage may create enclaves of privileged past, which exclude many others by labelling them as encroachers.

Thirdly, if one were to examine the social support for heritage enterprise, one finds a story of elite politics and mobilisation of popular sentiment towards heritage through tropes of religion. This is especially pertinent in case of a city like Jaipur, which had been a princely city till late 1940s and the royalty created much of its economic and public infrastructure. Today the royalty, its collections and its architecture are the USP of the city. However, they have had to democratically repackage their political power. The heritage economy of Jaipur is an avenue for them to legitimise their status within a city they had once ruled, as also an economic means to revitalise their resources.

One is well aware of the privy purses abolition in the 1970s by the Indira Gandhi government and the political challenges faced by late Rajmata Gayatri Devi, who had been a popularly elected leader to the Lok Sabha during the same period. Given this vulnerability faced by the old elite groups — the royal family and the Rajput nobility — the reinvention of the City Palace as a relatively accessible space for heritage connoisseurs, art enthusiasts and music lovers through initiatives such as the Gunijankhana (the historic name of the music room of the Palace) presents an attempt for sustaining political and social credibility. 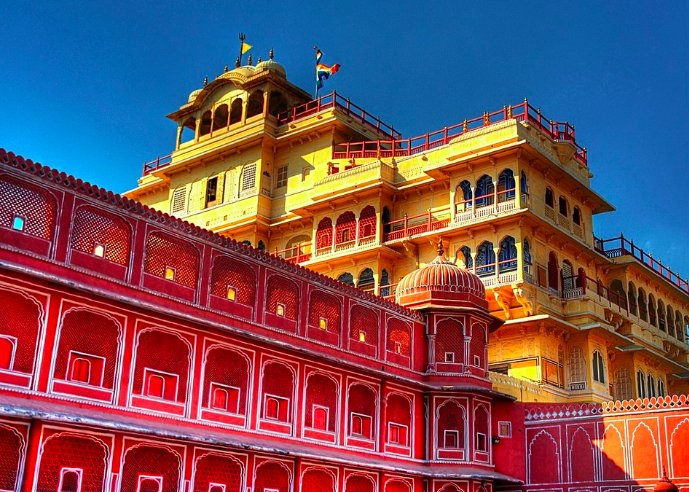 A very similar role is played by the famous Jaipur Literature Festival, which is hosted in Diggi Palace, an old garden mansion of a former noble in the Jaipur court. The grant of heritage status to the city is a legitimation that the former royals have been seeking ever since decolonisation and merger. The grant of heritage status has ensured a broader avenue for the Rajput elite into the global circuits of capital.

Incidentally, the popular imaginations of heritage in the city revolve, in a rather oblique manner, around the narratives of religion patronised by the royal family. It is noteworthy that the royal family of Jaipur espoused a partly Gaudiya Vaishnava tradition and there are several reflections of this in the built environment of Jaipur.

Local print media uses the sobriquet of “Chhoti Kashi” for the city. When a non-governmental group, Dharohar Bachao Samiti, protested against the metro rail construction in the walled city in 2015, they located many of their campaigns in temples such as Govind Devji.

Interestingly, most commercial heritage walks through the city also concentrate on these very temples and shrines, making them significantly valuable to the tourism industry. Such mapping of Jaipur’s ‘heritage’ however seems to be premised on a dominant narrative of royalty and religiosity, associated with it. The mohallas of Muslim craftsmen such as the pannigars (foil makers) or the neelgars (dyers) in Chowkri Ramchandraji or eastern parts of Ghat Darwaza in the walled city are excluded from the imaginations of heritage. A common refrain for these exclusions by heritage practitioners is the perception of these spaces as ‘dirty’ and the lack of upkeep, owing to economic weakness of the communities living there. This exclusion perhaps also indicates a larger politics of communalization since the 1990s and stereotyping the Muslim as the ‘Other’, as also the simultaneous ghettoisation of the community in Jaipur, which secludes the Muslim mohallas, presumed to be uncomfortable for the tourists.

The granting of the tag of “World Heritage Site” to Jaipur’s walled city by UNESCO may intensify the neoliberal repackaging of the city for purposes of tourism while simultaneously aligning with the resuscitated power of the erstwhile royals and other elite groups.

This new mechanism of power would exacerbate the already existing segregations and exclusions within the walls of the famed Pink City.

However, it may also perhaps push us to rethink and reimagine our heritage spaces to make them all encompassing.