The government has said it is building a larger war memorial at the outskirts of the city. Agartala: The removal of the ‘Martyrs Column’ in memory of those who lost their lives in the Bangladesh Liberation War, which was erected after 1971 in Agartala, has sparked off reactions from a cross-section of society in Tripura as well as Bangladesh.

Every year since the column was erected, the state government and Indian Army pay floral tributes to the martyrs on January 26 and August 15.

But the present-BJP led Tripura government has pulled down the column and shifted two tanks which were seized by the Indian Army during the war to a new place. The government has said it will soon begin construction of a modern sculpture where the column used to be.

This is being done under the Agartala Smart City Project Limited for the beautification of the city.

In a joint statement, writers, Bangladesh Mukti Bahinis (freedom fighters) and professors in Bangladeshi universities said that the support of the people of India and Tripura in the liberation war of 1971 was an integral part of the history of Bangladesh’s independence.

“The 40-foot-tall Martyrs’ Memorial at Post Office Chaumohani in the center of Agartala, the capital of Tripura, is one of the most important monuments to the common liberation aspirations and friendship of the people of India and Bangladesh… We have learned in the media that this monument has recently been abolished (sic). We are saddened by the removal of the history-linked monument. We request the Indian authorities to restore the monument to its rightful place  and to preserve the symbolic monuments of the relationship between the people of the two countries,” the statement says.

On November 16 last year, almost five decades after the 1971 liberation war, a tank and an artillery gun were shifted from the Post Office, Chowmuhani to Albert Ekka War Memorial Park, which is being constructed in Lichu Bagan area around five km away from Agartala city.

The Tripura Cultural Coordination Centre has strongly protested against the column’s removal. The group demanded immediate restoration of the memorial, saying that it hopes the government will atone for the destruction of history by playing a positive role in fulfilling this demand.

The Tripura Pradesh Congress Committee’s vice president, Tapas Dey, termed the move a ‘heinous job’ and claimed that the mindset of the BJP-led government is against the liberation movement as they had no contribution to it.

“It is unjustified, with a design to malign the martyrs and the people of the state who have contributed to the liberation movement. Moreover, they are trying to make fool people about the contribution of then Prime Minister Indira Gandhi and Congress during 1971. If they are doing it for beautification purposes, the memorial could easily have been kept intact in the present place. Unfortunately, they didn’t discuss with any other political party and all of a sudden broke the column. Theie mindset is against the movement as they had no contribution to it, and it is most unfortunate that this government has done such a heinous job,” Dey said. 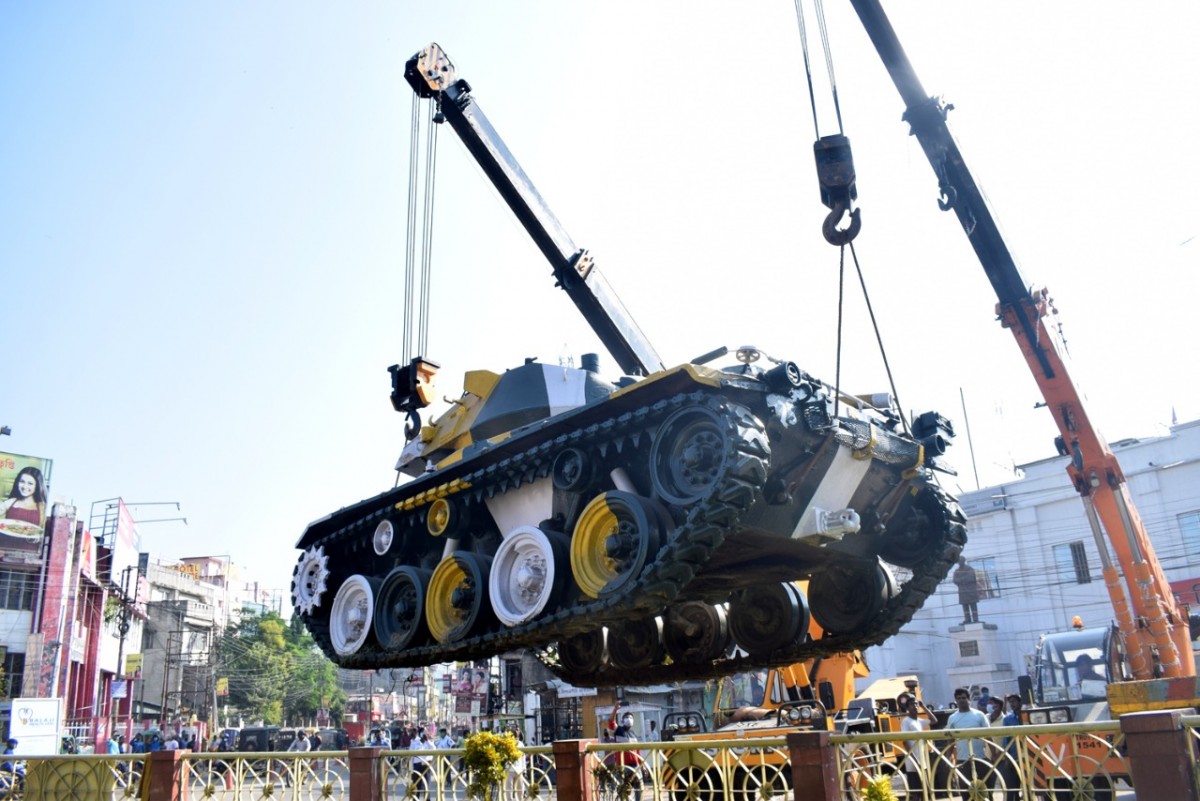 Convener of Tripura Left Front committee Bijan Dhar too condemned the act: “They are erasing history. It represented the sentiment of the people and it was not done. We condemned it and protest it.”

Reacting to the matter, BJP spokesperson Subrata Chakraborty told The Wire that the current space where the memorial was set up was very small and it was not maintained in a proper way.

“The Sainik Board has also written so many times to maintain it in a proper way and that is the reason why it was shifted to Albert Ekka Memorial Park – to maintain it properly, with honour and dignity. Our government is trying to protect such war memorials. The Sainik Board is also concerned about the matter,” Chakraborty said.

Veteran journalist Manas Paul said this Martyr Column belongs to the Indian Army and the place assigned to it was very small.

“During 1971 war, there was a lot of space in Agartala. The population was small and there was barely any construction. That time, the memorial was set up at the centre of Agartala city. But now the city has started growing, leading to a lack of space. The Sainik Board has demanded so many times to shift the memorial to a designated area. The present location does not allow people to enter inside and see the tank and artillery or read about its history. A dedicated war memorial is being constructed,” Paul told The Wire, adding that this will help people learn about the war.

However, no reaction has come from the Sainik Board in Tripura. Last year, when a tank and an artillery gun were shifted, then West district magistrate Shailes K. Yadav released a statement on the government’s plans. “It was a long-standing demand of the Indian Army to make a big war memorial combining both of these war memorials. The Army and Sainik Board raised this issue in front of chief minister Biplab Kumar Deb when he came to power in 2018. The project was taken up under the Smart City Mission after open tender at the cost of Rs 4.83 crore,” the statement reads.

He said that the Albert Ekka War memorial is already under construction at Lichu Bagan. The replica of the existing 40-feet victory pillar at Post Office, Chowmuhani has been constructed here.