The Changing Face of Delhi: The Colonial Influence

Armed with an inaccurate understanding of historical and cultural processes of exchange, the colonialists set about creating a new capital for the jewel in their crown.

This is part two in a two-part series. Read the first here.

Almost 50 years before 1857, in 1803 to be exact, the British wrested control of Shahjahanabad from the Marathas in the Battle of Patparganj. Very soon, the impact of their architecture began to be felt in a large number of structures that came up in different parts of the city.

Perhaps one of the first monumental structures, with its imposing façade of Corinthian pillars, that reflected these influences was the Palace of Begum Samru. Construction began in 1806 on a garden gifted to her by Akbar Shah Sani or Akbar II (1806-1837).

Another majestic building, with its Palladian exterior, its soaring pillars and three arched gates, in Chandni Chowk that currently houses the State Bank of India and had previously housed the Delhi Bank, The Imperial Bank and after Independence, the Reserve Bank, was also constructed around the same time.

The central Baptist Church also in Chandni Chowk was founded in 1814; the St James Church at Kashmiri gate was built in 1836. Construction of the oldest part of the haveli owned by Chunnamal began in 1848, just nine years before the 1857 rebellion; additions were made to the original structure in 1864 after more adjacent properties were acquired.

The St Stephens Church near Khari Baoli, built in 1862, is probably one of the earliest post-1857 large structures that came up in Shahjahanabad, followed four years later with the Town Hall, built in 1866.

The buildings, large and small, both private and public, that had begun to incorporate elements of European architecture, were influenced by and borrowed from the diverse architectural elements not only from the British but also from other colonial powers who had their foot hold in different parts of the country. 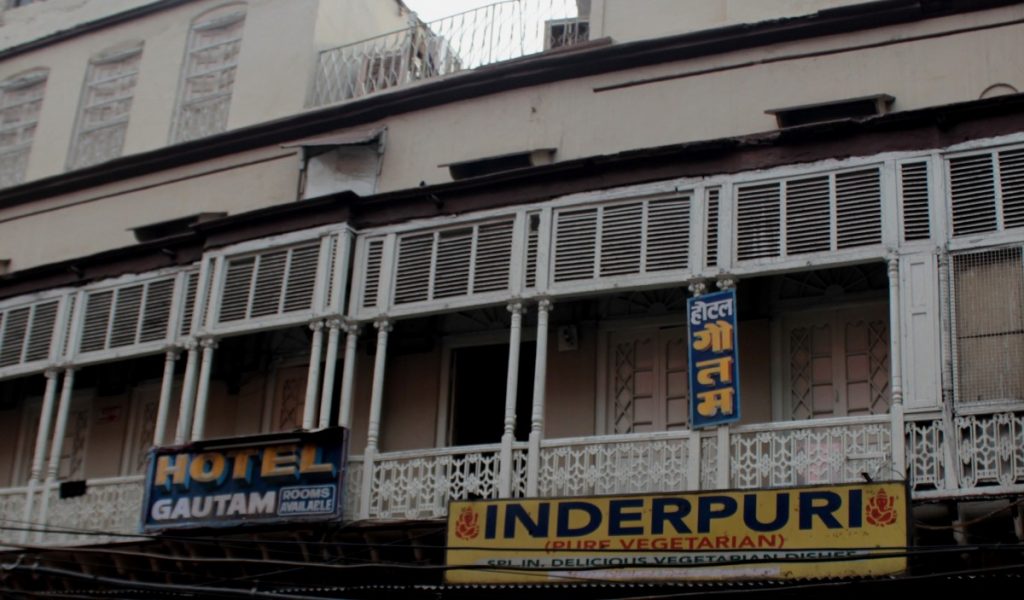 The Portuguese, who were probably the first set of Europeans who had a semi-permanent presence in India from the early 16th century; they were followed by the Dutch in 1605. The British had set up their first trade post in India at Surat by 1613, while the first French post was set up also at Surat in 1668 and at Masulipatnam in 1869.

Amidst all these influences, the British influence was the most prominent and that was to be expected as by 1775, they were in control of large parts of the sub-continent; very few of the so-called princely states exercised any real autonomy and the other colonial powers had been marginalised as far as the subcontinent was concerned. It was therefore the influence of the British that was to define the face of Delhi for the next many decades.

One of the most visible signs of this influence in architecture was the shift away from stone and brick construction to large scale use of wood. This was accompanied with the introduction of large number of doors and large windows with glass panes in new buildings especially on the first floor and above to let in more sun light. The insatiable hunger for the sun that the British suffered from was to totally change the aesthetics of our architecture and push us towards buildings that were absolutely unsuited to over environment. Delhi was semi-arid and there were no alpine forests in the vicinity to meet the ever growing demand for timber from Delhi and other urban centres where the British were expanding in the North Indian plains and so the Himalayan forests began to be raided. A massive ‘timber-store’ that we know as Kath-Godam came up to meet this unending demand. The destruction of our forests is thus directly connected to this refusal of the colonialists to adapt to the climatic conditions of the land that they had occupied.

Not everyone could afford the luxury of moving into the mountains during the summers and so we began to suffer, the ever growing demand for power and air-conditioning in homes and offices in our cities today is a result of this trajectory of architecture upon which we launched ourselves in a senseless aping of our colonial masters.

The Romanesque semi-circular arch began to replace of the ubiquitous pointed arch that had arrived with the Turks in the late 13th century and had gradually evolved into the cusped or scalloped arch in the 17th century.

House fronts that normally had only one door and were mostly single storied began to rise vertically, the use of steel in construction helped ease this transition. Balconies with cast-iron or wrought-iron railings on first floors became a default design element, they were fronted with slender carved wooden pillars used for supporting the weight of awnings, made from corrugated metallic sheets fixed on to the pillars with iron rods.

The permanent awning is a direct import from the rain soaked and snowed under little island that has never been able to make up her mind if she is European or not.

The balconies that had earlier rested on stone brackets expanded into terraces built with steel girders, mostly damaged and discarded and at times purloined railway tracks and supported, on the ground by steel girders or cast iron pillars.

Increasing use of steel, primarily iron girders in construction starts, probably post 1864, when the railways reached Delhi. The increasing use of metallic hardware in construction also has the same vintage and it is only in the mid-19th century that some of the earlier hard ware shops opened for business in Chawri Bazar that they seem to have over run in the last few decades.

Along with these major changes also came little details, the carvings on pillar bases and pillar tops, the little touches as embellishments so markedly present in the old havelis of Kuch Pati Ram and elsewhere. There are also and some rather horrible imitations of, later day absolutely out of place, baroque trimmings that are so ugly that they are funny. It is these trends, some a product of deliberate design, some part of a process leading to a style that assimilated these elements. It is this mixture that came to be known as Indo-Saracenic, an amalgam according to some of elements of Gothic and neo-classical architecture and what the British thought was Indian-classicism, essentially elements of Mughal architecture as they understood it,

The problem with this mish-mash begins with the name itself ‘Indo-Saracenic’. Saracen was a term used for the Arabic speaking Muslims of the Middle-East and North-Africa. The architecture that had developed in South Asia had little to do with the developments in the Arabic speaking world it was primarily Turko-Persian.

It is armed with such inaccurate understandings of historical and cultural processes of exchange that the colonialists set about creating a new capital for the jewel in their crown that was bedecked with stolen diamonds.

Their combined effort and land donated generously by their loyal majesties of Jaipur and Jodhpur and others that they created the eighth capital in Delhi. Why it was not a city and may never be one is another story.