The proposed redevelopment of South Delhi will bring about a surge in congestion that will not only place an unbearable burden on public infrastructure, but also destroy an already tattered map of urban space, ecology and civility. A creeping tide of densification has already occurred across Delhi with the Master Plan 2021. Credit: Juhi Saklani 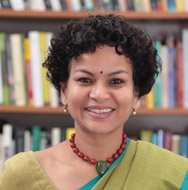 Aurobindo Marg was named after the renowned philosopher and guru, the Delhi campus of whose ashram lies alongside this road. Fittingly, driving on Aurobindo Marg today demands spiritual strength and yogic discipline. Heading south from the grandeur of Lutyens’s tree-lined avenues and the grace of Safdarjung’s tomb, one swoops down the flyover to come to a crawl at INA Market. Traffic must squeeze past cars that are inching their way into the parking lot. The air is laced with fumes from idling engines. From there, after the spaghetti junction at AIIMS, vehicles have to nose their way through a start-stop stream from Yusuf Sarai Market to Mehrauli and the urban dystopia that is Gurugram. Late at night, one can drive this distance in 20 minutes. During rush hour, it can take close to two hours. Plus, all the stress-busting strategies that one can summon.

So, one would think that the last thing that Aurobindo Marg needs is more traffic. Yet, that is exactly what the government is promising. Coming up at the crossing of Aurobindo Marg and the Ring Road at East Kidwai Nagar is a gigantic complex of high-rise apartments and commercial towers that is guaranteed to multiply the congestion in the area. 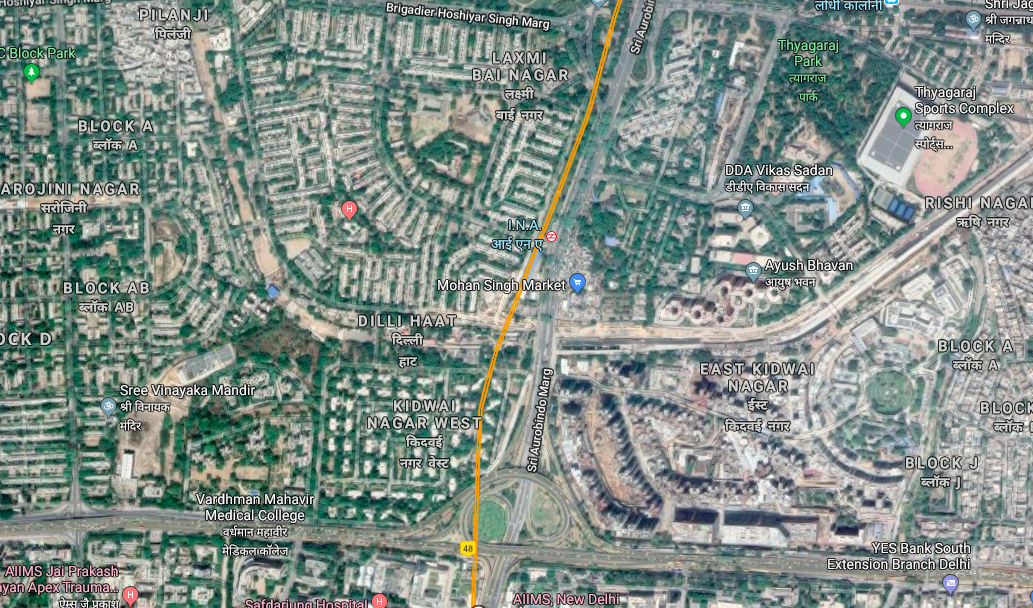 Add to this the redevelopment of the nearby residential colonies of Sarojini Nagar, Netaji Nagar, Nauroji Nagar, Thyagaraj Nagar, Mohammadpur and two other neighbourhoods and the prospect of choked arteries and air is complete.

In Sarojini Nagar and Netaji Nagar, the plan is to replace low-density houses with double the number of residential units, which could mean double the number of vehicles. However, for Sarojini Nagar’s 10,655 proposed dwelling units, the environmental clearance given by the Ministry of Environment and Forests (MoEF) approved parking facilities for an astounding 83,800 cars.

The ministry also cleared the Netaji Nagar redevelopment where 4,882 dwelling units will be accompanied by parking for 17,928 cars. The National Buildings Construction Corporation (NBCC) which has designed and is executing three of these projects says that it will provide basement parking for 70,000 cars.

Despite the puzzling discrepancies in these figures, their magnitude alone should alert us to what is in store for south Delhi – a massive injection of private vehicles onto streets already incapable of containing them. For every car that is parked is also a car that moves across the city, taking up space, emitting toxic fumes, making streets that much more hostile to those who walk, cycle and use public transport. The surge in congestion they will cause will place an unbearable burden on public infrastructure. It will also destroy an already tattered map of urban space, ecology and civility. Why, then, is the Ministry of Urban Development bent upon promoting these projects?

Densification, or increasing population per unit of land, has long been proposed as a strategy for addressing Delhi’s need for housing, commercial, and institutional space. In 2007, the Delhi Development Authority formulated Master Plan 2021, a guidemap for the city’s future growth. This document noted that the city’s government colonies and cantonment, with their characteristic sprawl of two-storeyed buildings surrounded by generous open areas and trees were an inefficient way of using land. It recommends that they be ‘densified’ through more closely-packed vertical development. (Tellingly, however, this argument was not applied to Lutyens’s Delhi where politicians and top bureaucrats reside.)

But while vertical development may take up less area on the ground, its ecological footprints on the city’s water, energy, sewage and traffic maps go far deeper. Not only will it bring about a sea change in what Delhi would look and feel like, it will further flout environmental limits that the city should by now have learned to respect. An ongoing public health crisis caused in great part by vehicular pollution, a river of untreated sewage, drinking water obtained by damming distant Himalayan rivers, mountains of garbage poisoning the air and ground, soaring temperatures because of the heat island effect caused by glass-concrete-tarmac and waste heat from air-conditioners, generators and vehicles – we can’t handle any of these problems and yet we want Delhi to densify?

A creeping tide of densification has already occurred across the city with the Master Plan 2021. In 2007, the Municipal Corporation of Delhi allowed an extra floor to be added to existing two-storeyed private houses. From 2012, when the Supreme Court ruled that new houses could have four floors, existing homes were demolished and rebuilt to take advantage of the additional area allowed. The consequent pressure on parking and civic infrastructure – on streets and lanes, water and sewage pipes built for smaller populations – was simply shrugged away.

The changed rules exacerbated the situation created in 2006 when, in response to traders’ protests against the Supreme Court-ordered sealing drive, the urban development ministry legalised commercial activity in residential neighbourhoods by re-designating them as ‘mixed land use’. Dense, mixed-use urban settlements are not inherently problematic. Many Indian cities, including Mumbai, Kolkata and Chennai, number among the world’s most dense cities and have thrived cheerfully for decades. One can even argue that a policy of densification creates more housing and jobs. However, in the absence of accompanying public infrastructure and environmental safeguards, densification has also inexorably led to cities that are bursting at their ecological seams.

Instead of continuing to quietly abet densification, the current wave of projects aggressively endorses it as the hallmark of a ‘world-class’ city. In Nauroji Nagar, for instance, residential units will be replaced altogether by a ‘World Trade Centre’ with 12 commercial towers. (Remarkably, this Built-Up Area of 539,391 square metres (m2) is to have parking for only 8,014 cars!)  Netaji Nagar will have a residential area of 967,336 m2 and office space of 343,785 m2. Looking at the extent of ‘office space’ proposed, it’s clear that, in the name of building housing for government employees, the NBCC is planning to intensify commercial activity to a level that is unprecedented in Delhi. And, judging by the perfunctory environmental clearances issued by the MoEF, the implications of such redevelopment for the city as a whole remain largely unconsidered.

The urban development ministry says that we need such commercial construction to offset the costs of building residential units. On the face of it, this financial logic seems sound. Allowing builders to sell commercial space in order to fund socially beneficial projects has been the reasoning behind schemes based on the concept of Transferable Development Rights. First used first in Mumbai in 1991 for housing slum-dwellers, TDR-based schemes have since been deployed across the country for everything from providing civic amenities to heritage conservation.However, in several instances, the commercial tail has wagged the social benefit dog, with perverse effects.

Take the case of the underground parking lot in Kamla Nagar, a popular market near Delhi University. The North Delhi Municipal Corporation destroyed a low-key park with old champa and sheesham trees, the central open space in the area, to build a monstrous three-storeyed mall, ostensibly to finance the car park below ground. The consequent increase in shops and restaurants has worsened congestion, instead of reducing it. Sarojini Nagar, Netaji Nagar, Nauroji Nagar and their environs are bound to suffer the same fate: the environmental pressures of commercial activity, and the congestion caused by one lakh additional cars, will overwhelm the modest gains from building housing. I keep coming back to the cars because it seems to me that an obvious way of raising funds for public projects is to make car-owners and users pay for the disproportionate benefits they receive from urban infrastructure. A significant chunk of the city’s public land is occupied by parked cars. The biggest beneficiaries of broader roads, flyovers and underpasses are the owners of private vehicles. Yet their owners pay nothing or a pittance for enjoying these amenities. If private vehicle owners paid environmentally appropriate charges, we could fund public projects without having to sell our city’s soul. At one go, we would deter congestion and commercialisation. The Centre for Science and Environment has two well-researched reports that make a compelling case for this. One of them, ‘Gridlocked Neighbourhoods’, is exclusively focused on south Delhi and makes for essential reading at a time when the area is threatened by irreversible change.

The spirited protests against cutting trees in these long-established neighbourhoods and the widespread support that they have received from ordinary citizens, show that the idea of a livable city touches many hearts. The quality of urban life depends on jobs and housing, education and healthcare, transport and safety. But it also depends on water and air, trees and parks, and lively streets. By decrying the death of old trees, people express their sense of place, what they would like the city to be. Their anger is not only directed against the stupidity of these plans but against a planning process that excludes citizens from decisions that affect their everyday lives. As environmental law analysts Kanchi Kohli and Manju Menon point out, the MoEF exempts the proponents of real estate projects from having to conduct public consultations, which are otherwise an essential part of Environment Impact Assessment, a prerequisite for getting government approval. What could be more undemocratic?

Densification is being pushed down people’s throats without letting them voice their concerns, criticism and alternative conceptions of what the city should be. Piecemeal interventions by the courts are not enough. As preparation for drafting a new Master Plan for Delhi begins, citizens must seize the moment to start a thoroughgoing conversation about the city, its current and future economy, ecology and cultural life. Otherwise, more trees will make away for buildings, more cars will clog the roads and we will drown in our own waste, foul air and water.

Note: According to a report in the India Express, the Ministry of Housing and Urban Affairs has decided to re-work the project design to avoid cutting any more trees after facing a severe backlash from several groups.

Amita Baviskar is a sociologist at the Institute of Economic Growth, Delhi