As urban growth outpaces the imagination of our planning authorities, it has become increasingly clear that on-site sanitation solutions will continue to play a crucial role in Indian cities.

When we imagine a ‘modern’ Indian city, we assume that it comes with a vast, hidden sewer system that transports waste to treatment facilities. But our cities don’t quite work that way.

In the absence of planned sewerage, nearly 60% of toilet-owning households in urban India are connected to on-site sanitation (OSS) systems. These are underground containment structures like septic tanks or pits that hold the waste, often for decades, at the point of disposal. At the storage stage, these systems are expected to provide a degree of primary treatment through decomposition and stabilisation of the faecal sludge. As the waste accumulates, it needs periodic emptying, through either manual or mechanical processes, and further treatment before disposal into the environment.

Despite the prevalence of OSS systems, urban sanitation policies and programmes frequently treat them as a stopgap solution till complete sewer coverage can be ensured. However, ensuring universal sewer access is a resource-intensive, technically complex and time-consuming proposition. Even as urban local bodies have access to centrally sponsored schemes which fund them, albeit partially, to extend sewer networks, only a third of all toilet-owning households in urban areas are connected to this network, according to the 2011 Census. As urban growth continues to outpace the imagination of our planning authorities, it has become increasingly clear that OSS solutions will continue to play a crucial role in Indian cities of all sizes and configurations.

In the absence of government efforts to secure the entire sanitation value chain, the business of ‘desludging’ these OSS systems and the transportation and disposal of faecal sludge has been taken over by a host of informal private enterprises. The Centre for Policy Research recently carried out case studies across Jaipur, Dehradun, Bhubaneswar and the Aya Nagar neighbourhood of Delhi, documenting the deep informality and vulnerability with which these enterprises function. Such enterprises are usually one truck operators, who function without government supervision or considerations of worker safety. For want of treatment facilities, either public or private, operators are forced to dump the collected waste in agricultural fields, nearby water bodies or on vacant plots of land. This recreates the very public health risks which programmes like the Swachh Bharat Mission aim to prevent.

Typically, these enterprises operate without a policy or regulatory framework. Even where such frameworks exist, such as the Delhi Jal Board’s Septic Tank Waste Management Regulations (2015), there is little awareness and execution. The Aya Nagar study found that local government officials, the police and operators are unaware of these rules, let alone enforcing them. The enterprises resort to bribes to facilitate their operations and report no form of licensing or training. Limited access to affordable financing prompts operators to keep input costs low by opting for second-hand trucks, low-quality containers and resorting to unsafe labour practices. These promote short term profitability while raising concerns around environmental, social and financial sustainability.

As urban local bodies recognise the importance of OSS solutions and the drive to build treatment facilities for faecal sludge intensifies – Andhra Pradesh alone is planning to build around 78 facilities – they face increasing pressure to regularise and scale up the septic tank emptying sector. At this juncture, policymakers should recognise that the sector’s present informality – lack of licensing, unsafe labour practices, inadequate equipment, unrestricted dumping, erratic pricing – is a response to, not a cause of, the institutional and regulatory gap. In many towns and cities, these informal service providers are the only response to a pressing urban need. Despite the persistence of caste-based employment and stigmatisation of sanitation work, the partial mechanisation of these enterprises represents an improvement on entirely manual practices. Thus, new regulatory frameworks need to strike a balance between minimising risky practices while increasing the sector’s overall business potential. This would necessitate addressing a set of constraints.

One, increased regulation has the potential to increase operating costs. The DJB rules include a set of transport regulations – special licensing, commercial instead of agricultural vehicular registration, periodic pollution checks etc. – which are currently not complied with. In an ideal framework, these might be supplemented by labour safety laws and designated dumping sites. Modelling exercises based on the four case studies show that such regulations force operators to increase prices nearly three to four times to cover increased costs and maintain current profit levels, which are anyway marginal. In the short term, this could well force out many of the smaller, one-truck operators and lead to a market monopoly via the consolidation of multi-truck operators. Any such monopoly has its own set of bearings. 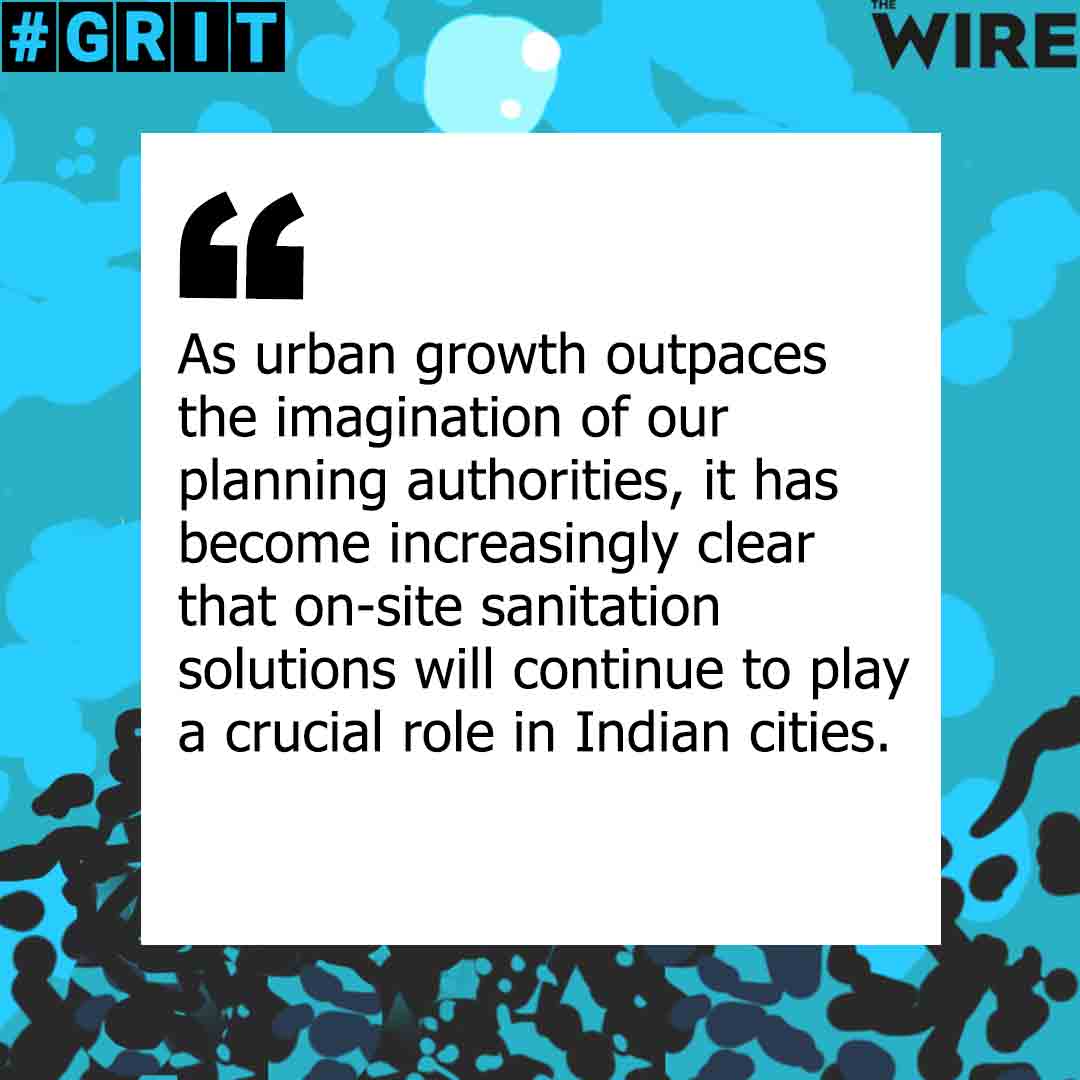 Second, though the vast majority of regulatory frameworks currently target only the enterprises, there are demand side issues that need to be addressed. Surveys indicate that households treat desludging as an emergency activity, requesting it only when the septic tank is creating problems of clogging, backflow or overflow. Repeated delays in desludging of OSS systems lead to accumulation of sludge which significantly reduces the primary treatment capacity at the point of disposal. Additionally, decades of inconsistent enforcement of septic tank building standards have spawned a huge and unseen variety of on-site containment structures. Such inconsistency in enforcement coupled with erratic desludging behaviour makes it difficult for enterprises to plan their business operations. This renders such businesses unstable, unpredictable and non-scalable in the medium term. The proliferation of newly constructed toilets under the Swachh Bharat Mission without adequate data on the related containment structures has exacerbated this problem.

Third, given the lack of widespread sewer coverage especially in upcoming urban areas, local governments need to put greater emphasis on OSS and the associated service ecosystem. These can be done by explicitly recognising that ‘off-network’ solutions will continue to play a crucial role in urban sanitation story. Such an admission encourages local bodies to adopt customised approaches to urban sanitation and emboldens these enterprises to invest further in their business, look for new sources of financing, and experiment with different technologies.

The drive towards blanket formalisation of septic tank emptying businesses needs to be informed by a strong evidence base and the knowledge that clumsy regulation might exacerbate, rather than mitigate, such risks. Regulations may be rolled out in phases, giving operators and households time to adapt. Furthermore, while new regulations should disincentivise risky behaviour, they should not be so restrictive that market innovation is throttled. In a scenario where these informal private operators are crowded out, the onus of providing these services will fall on the public authorities and could unintentionally foster manual cleaning practices. To truly achieve a Swacch Bharat, local authorities will have to think imaginatively about post-2019 scenarios and should responsibly integrate such businesses into their plans.

Prashant Arya is a research assistant, Anindita Mukherjee is a senior researcher and Shubhagato Dasgupta is a senior fellow with the Scaling City Institutions For India: Sanitation (SCI-FI: Sanitation) programme at the Centre for Policy Research. The views expressed are their own.

#Grit is a new initiative of The Wire dedicated to the coverage of manual scavenging and sanitation and their linkages with caste, gender, policy and apathy.