In a new book, Saumya Roy tracks the stories of depend make a meagre living from trash. 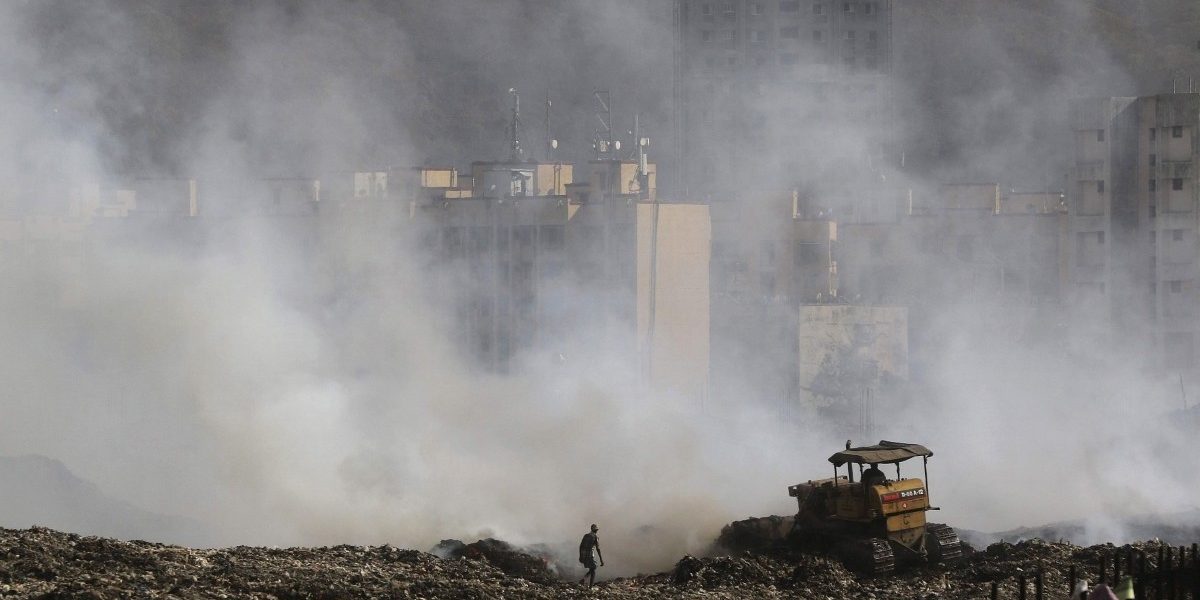 A massive fire that broke out at the Deonar dumping ground in 2016. Photo: Reuters 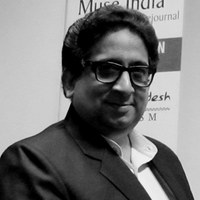 Even the creation of a city’s underbelly can be a deliberate consequence of its development.

The city of Bombay’s grand mercantile expansion, in the wake of its textile boom from the late 1860s, produced garbage of a quantity sufficient to need a space for its relatively invisible disposal. The search was for a space that would not cast a blemish on the fair face of the Urbs Prima. The swamps of Deonar, miles from the city, which was much smaller then, were identified as a suitably out of the way place for this purpose.

A special train brought the city’s garbage in a kachra gaadi to this dump yard for several years. Even when the train and its tracks vanished under the jackboot of progress, garbage continued to arrive in Deonar in trucks and dumpsters, piling on the detritus of metropolitan consumption, layer after layer, year after year, until the site rose like a leviathan to become a mountain covering more than 300 acres and climbing to a summit of 120 feet, the height of a 12-storey building.

Over time, settlements grew all around it on the landward side (one side of the mound slips into the khadi or creek) and a symbiosis between the inhabitants and the mountain developed. These inhabitants – immigrants, minorities and those from the lower castes — dig for resources from its contours on a catch-as-catch can basis, eking out meagre lives, hoping for better days. 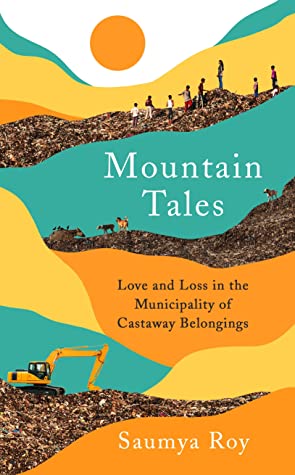 Saumya Roy tells us the story of this garbage mountain in her book Mountain Tales: Love and Loss in the Municipality of Castaway Belongings. There is an implicit critique in her choice of sub-title, placing Municipality and Castaway side by side. Her narrative follows two parallel tracks, as she writes about these ‘castaways’, the ones who make their livelihood here, in a matter of fact way, without being judgmental, but never holding back on their hard, frequently cruel existence. On the other hand, she also documents the ongoing story of the mountain of trash, a ‘belonging’ of the Mumbai Municipality in detail, of the many attempts to find a solution to the problem of this discarded part of the city that is now in the middle of it. In a sense, the life of the mountain bookends the two great pandemics of Mumbai’s urban history: its beginning as an acquired swamp-land around the time of the great plague in the 1890s when the Kachra Train was established, to the present day, as the city wallows in the COVID-19 pandemic, while plans are still being made to alleviate the predicament of Deonar, with no end in sight.

Roy is a journalist who runs a non-profit with her father, giving out micro-credits to small entrepreneurs to start off small business ventures. In 2013, several of those who came to her for loans were scavengers and waste-pickers from Deonar. Hyder Ali Shaikh was one such aspirant, seeking a small loan to move away from scavenging to an enterprise in tailoring. The loans which the inhabitants of Banjara Galli in Deonar came for formed punctuations to their lives, as they toiled to pay them back, sometimes succeeding, but more often not. Intrigued by his circumstances, Roy explored Ali’s home and world for close to a decade and came into contact both with his large family and his colossal workplace. Here she met his daughter, Farzana Ali Shaikh, who became the chief protagonist of her story.

Farzana is fierce, feisty and fearless and is obsessed by the kachra mountain, oblivious to the dangers and challenges she finds herself in, chasing dumpsters as they arrive daily emptying their load of discards and refuse on the vast midden of Mumbai. Armed with rudimentary tools like metal tongs and gloves, she dives straight into the deposits of the day, scavenging everything recyclable, from glass to copper wires, from metals to cloth rags, anything that can be collected in a sufficient quantity that can be exchanged for money.

Also read: After the 2015 Floods, Chennai Only Exploited the People Who Were Cleaning it

To succeed, she has to spend several hours of each day (and night, on occasion) digging through the garbage with an eagle-eye for useful goods, while competing with rival scavengers, avoiding the keepers and guards of the dump, and staying safe from the treacherous terrain that can be slippery, sharp or even sludgy like quicksand. This she does despite entreaties and threats from the members of her family to stay away, especially her domineering brother Jehangir.

Roy follows Farzana’s life from the time she is just reaching puberty to around a decade later, when much has changed. She tells us the stories of her family, her neighbours and immerses us in an extended cast of characters that form the vast human ecosystem that exists because garbage from the city is relentless in moving in. Each day brings new pickings and new challenges.

The pickings that Farzana and her scavenging companion Farha, her younger sister, and the many inhabitants of Banjara Galli seek, come in a variety of guises, free if you find it and with unforeseen consequences if you pick it up. In fact, the resources to be scavenged give rise to sub-specialties – the phugawalas root after plastic; the chumbakwalas scour the surface with magnets at the end of the sticks to search for metals or the chindhiwalas who search for textile waste. But beyond this, there are far less salubrious pickings, the areas they call the prawn heap which is filled with decaying food, or medical waste discarded wantonly rather than incinerated. Even though illegal, this yields rich dividends of glass, metal and plastic, if one can sift through body-parts intermixed with them. 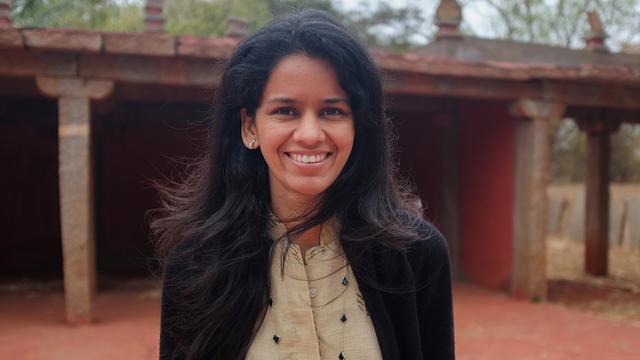 Roy’s story begins with Farzana finding a foetus of conjoined triplets discarded in the garbage. She is intrigued rather than repelled and gives it the respect of a quiet burial. She is inured to shock, having found all sorts of things underfoot. She does not consider the possibilities of toxic poisoning, inhaling the vapours that emerge from beneath her feet or the possibility of a fatal mishap on the slopes of the mountain. She has to be numb to all this to succeed and this later leads to terrible consequences that will transform her life and that of her family.

There is also a sense of mystery and wonderment that permeates the consciousness of the inhabitants of Banjara Galli about the mountain they love and hate. The mountain gives, on occasion, some amazing things, like gold chains and rings, and for a short while, whole piles of demonetised currency. But such luxuries come with a caveat: the waste pickers believe that the bad luck that caused the original owners to lose such valuable goods continues to infect anyone who picks up these objects. They are all aware that the behemoth is a shape-changer that inhales monsoon rain to expand and exhales in the summer months as it deflates through evaporation. They have to constantly deal with fires that keep springing up, that burn for days, filling their lungs with fumes and defying the fire brigade’s efforts to douse them. Methane rises in the mottled dawn in wisps that the scavengers see as djinns, malevolent spirits that sometimes enter their bodies and need exorcising at the dargahs of Mumbai. There is also a sense of fatalism in all they do. Illness, mishaps and violence surround them and they have come to terms with it. Yahaan boodha ho ke koi marta hi nahin, a local cleric tells Roy – no one dies here of old age.

Also read: Down in the Dumps: The Tale of Delhi’s Waste Pickers

About two-thirds into Roy’s story, she narrates a terrible event that devastates lives and livelihoods. While not going into its details, it reads like inevitability, the coming together of every danger that the mountain poses to those who disturb it. This casts a long shadow, but in its aftermath there is affirmation – a story of selflessness and sacrifice, of acceptance and renewal. The goodness in people, both in the streets where the Shaikh family lives and beyond comes to the fore. There is a joint effort to rise out of their predicament rather than to sink into a morass of ever present fatalism, and this gives Roy’s tale a special edge.

And yet, beyond the lives of the few, plans and shenanigans vie for space in the determination of the mountain’s future, in municipal offices, in corporate committee rooms and even in the courts. On occasion plans are made for their own sake, knowing full well that the status quo will ultimately prevail. Roy paraphrases a Marathi adage here to describe this shadow play: ‘I’ll act like I beat you and you act like you cried’. These lead to a series of disruptions over the ten years that Roy tracks them, from stopping building construction all round (which does not succeed), to holding back on the trucks that come to the refuse site (which do not stop), to the possibility for setting up a plant in Deonar to convert waste to power (which does not happen).While these disruptions affect the waste-pickers on a day to day basis, hitting them where it hurts the most, the comings and goings of the city’s castaway belongings oscillate like heartbeats, but never stop.