A simple satellite view of the projects sites on Google Earth brings out the gap in information between the actual number of heritage buildings located around the project sites and the ones mentioned in the documents. 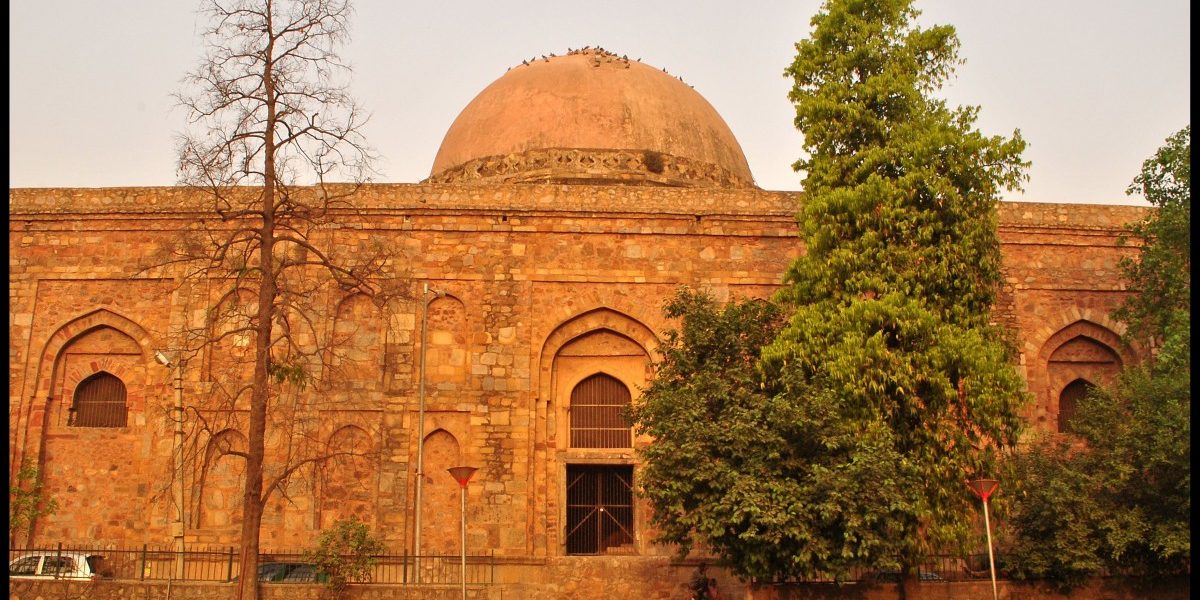 In the last few weeks, Delhi has witnessed a wave of citizen actions in response to the unmindful tree felling for the redevelopment of seven government residential colonies in the city. In July 2016, the Union cabinet approved the transformation of Sarojini Nagar, Netaji Nagar, Nauroji Nagar, Thyagraj Nagar, Mohammadpur, Kasturba Nagar and Srinivaspuri. The reconstruction is to be undertaken by NBCC and Central Public Works Department (CPWD).

However, it was only when the proponents of the project began felling of trees in these areas last month, did citizens realise that they were about to loose more than 14,000 fully grown trees in the name of redevelopment. While tree-felling is one crucial aspect, a careful examination of these project documents throws open a Pandora’s box of questions about other important aspects that this redevelopment plan fails to address.

One such aspect is Delhi’s rich cultural heritage which can be traced through various historical monuments dotting its landscape. The area in which redevelopment is proposed also houses numerous historical monuments, making them an important factor to be taken into account. But unfortunately, the project documents distract readers from them.

The only project documents available in public are Environment Impact Assessment (EIA) reports made for the environmental approval process. The EIAs for these projects have been developed by consulting companies such as ABC Techno Labs, Perfact Envirosolutions Pvt. Ltd. and Hubert Enviro Care Systems (P) Ltd or by project proponents themselves.

As per the norms of Environmental Impact Assessment Notification 2006, the project proponent is required to divulge the details of all the cultural heritage sites which are likely to face long-term impacts from the project. The EIA notification mandates all projects to list heritage sites located within an aerial radial of 15 km. However, for construction projects, this benchmark has been diluted to require listing of heritage buildings which are “nearby” (the project sites). This vague benchmark of “nearby” has been systematically used to bypass the EIA norms by these redevelopment projects.

What the EIAs don’t tell

An analysis of the information provided on heritage in these documents reveal the following.

As a requirement of the Form 1/1A to be filled for the EIA process, each project proponent across these six project sites, namely, Sarojini Nagar, Netaji Nagar, Nauroji Nagar, Thyagraj Nagar, Mohammadpur and Kasturba Nagar has mentioned the names of anthropological or archaeological sites or artefacts located “nearby”. However, upon careful examination of these details, it was found that these EIA reports do not follow any uniform guidelines or thumb rules such as specific radial distance of the monument from the project site.

For most of the project sites, the list of monuments are not exhaustive. A simple satellite view of the projects sites (using its GPS coordinates) on Google Earth brings out the gap in information between the actual number of heritage buildings located around the project sites and the ones mentioned in the documents.

A further analysis of this gap revealed that most of the monuments which were missing in the EIA reports either belonged to Grade I category of heritage sites listed by the Municipal Corporation of Delhi or are amongst the 170 protected sites notified by the Archaeological Survey of India (ASI). These sites by the nature of their categorisation by the two bodies, represent the cohort of the most critical cultural heritage sites in Delhi.

In addition, the methodology used for listing the historical monuments in these documents is rather inconsistent, e.g. EIA report of Redevelopment Plan in Nauroji Nagar mentions Red Fort which is at an aerial distance of 11 km but fails to mention Teen Burji Walla Gumbad (domed building) which is within 500 metres of aerial distance from the site and is one of 170 protected monuments notified by ASI (see the images below). Such inconsistencies can be found across most of the EIA reports of these redevelopment plans. 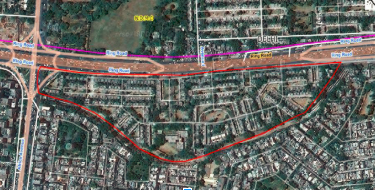 The image above has been taken from the EIA report of Redevelopment plan for Nauroji Nagar, the area within the red boundary is the project site. 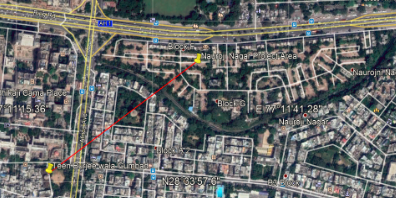 On Google Earth, the aerial distance between Nauroji Nagar Project site and Teen Burji Walla Gumbad is around 474 meters.

Below is the indicative list of Grade I heritage monuments as per the 2010 Delhi Gazette Notification and protected sites under ASI, that are located within three km of aerial radial distance from the sites but are missing from the project reports. There could be more heritage sites from Grade II and III lists which have not made it to the EIA reports.

Along with these methodological inconsistencies, one can also spot factual errors in EIA reports and Environmental Clearance letters. e.g. the GPS coordinates in EC and EIA for the Mohammadpur project takes you to a spot near Baba Kharak Singh Marg area in Delhi which is approximately 10-11 km away from the original project site. 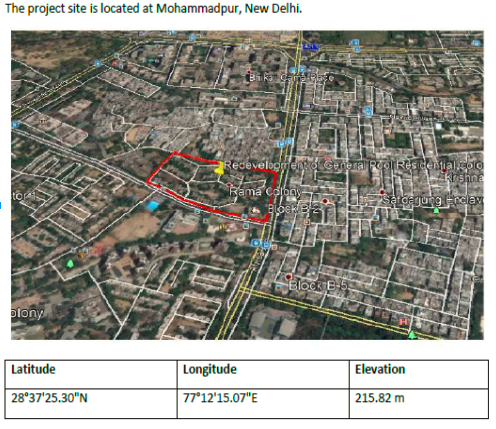 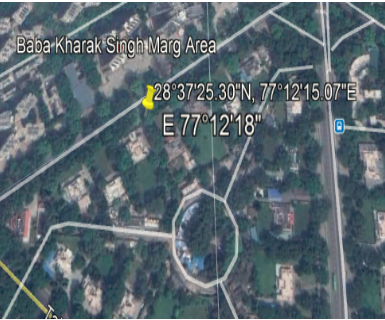 Who cares about heritage?

These anomalies only leave one wondering about the quality of rigor followed while preparing or examining these critical reports before granting environmental approvals to these projects. Also, this oversight of information on cultural heritage easily ‘absolves’ project proponents of any responsibility to ensure that there are no long-term impacts on these critical historical sites. It is also not clear if bodies such as ASI, Heritage Conservation Committee or MCD which are responsible for conservation of these sites are demanding an explanation for this improper disclosure of information.

While the Delhi Master Plan 2021 has declared certain areas as protected sites, building the aspect of heritage conservation in the plan, yet, these heritage sites are increasingly being viewed as a stumbling block in the path of infrastructure development.  In 2017, the Lok Sabha passed The Ancient Monuments and Archaeological Sites and Remains (Amendment) Bill, 2017, to allow government to take up infrastructure projects within prohibited areas (100 metres of radial distance) around protected monuments. Hence the larger question is, do we want a certain idea of development to prevail at the cost of our cultural heritage? And is it enough to just to set up committees and notify certain sites as protected while the actual conservation norms for these heritage sites are constantly being diluted or bypassed with no accountability?

Vidya Viswanathan is a researcher at Centre for Policy Research, New Delhi.