In Photos: For Thousands of Mumbai Residents, Water Supply Is a Distant Dream

While well-off citizens get regular access to subsidies water, those living in informal settlements are left to fend for themselves. Water in plastic pouches (sold at Rs 2-3) like these are commonly sought after in many informal settlements. They are generally kept refrigerated by shopkeepers.

Through a highly complex network of pipelines, the Municipal Corporation of Greater Mumbai (MCGM) supplies close to four billion litres of potable water daily to be consumed by a population of roughly 15 million citizens. Technically, this means there is enough water for every citizen in the city, as per the service level benchmark of 135 litres daily/person (set by Ministry of Housing and Urban Affairs, Government of India) to ensure that basic needs are met, and few health concerns arise. A wall painted image of the Hindu god Shiva at the informal settlement of Geeta Nagar in south Mumbai.

Sold at a heavily subsidised rate of roughly Rs 5 for 1,000 litres, a well-off citizen living in a gated high-rise society can receive up to 240 litres for daily consumption. On the flip-side, citizens in informal settlements, aka slums, are paying up to 40-120 times more to unauthorised sources and surviving on just 20 litres a day. This inequitable water distribution is a clear violation of human rights and raises questions about the city’s governance. 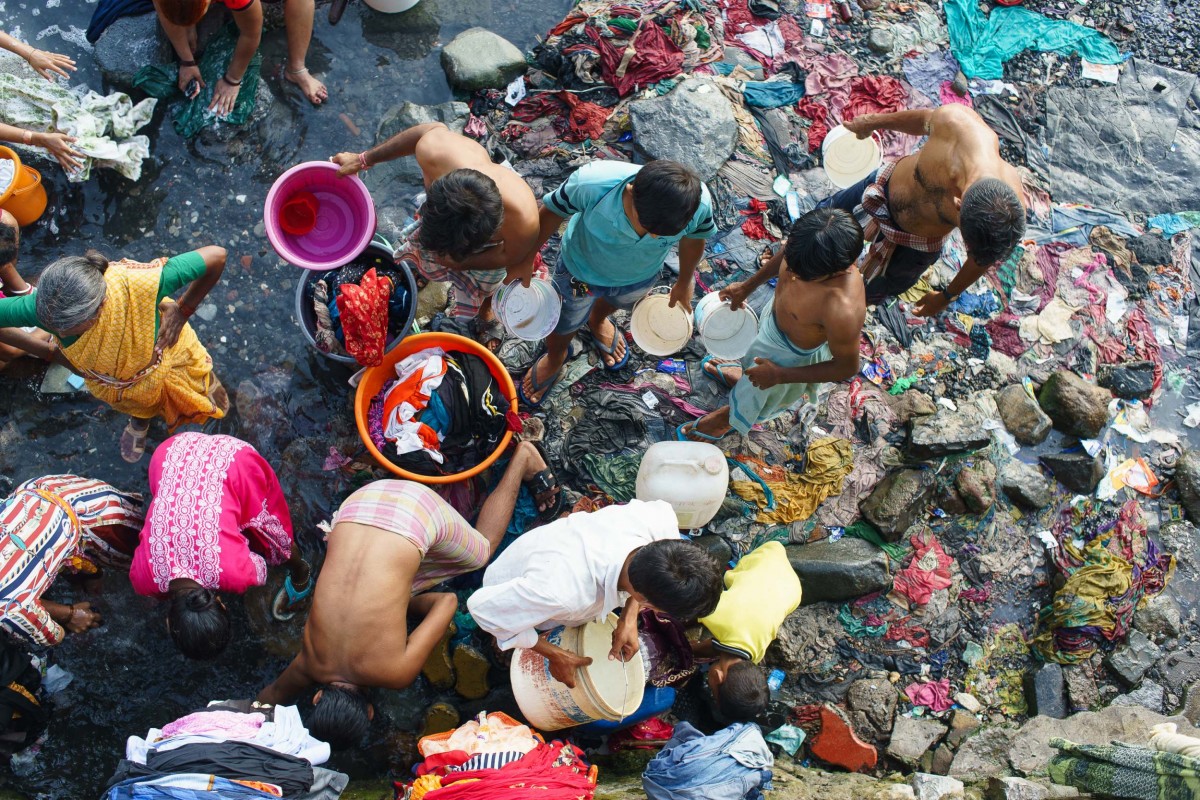 Residents of Geeta Nagar (south Mumbai) rely on an unknown stream outlet to wash their clothes.

Historically, ‘upper’-caste Hindus denying water to people at the bottom of the caste ladder has been a recurrent story in India. Nikhil Anand, author of Hydraulic City, aptly describes the prevalent discrimination that to this day exists in water governance – between those seen as deserving of being citizens and those informally settled in the metropolis. 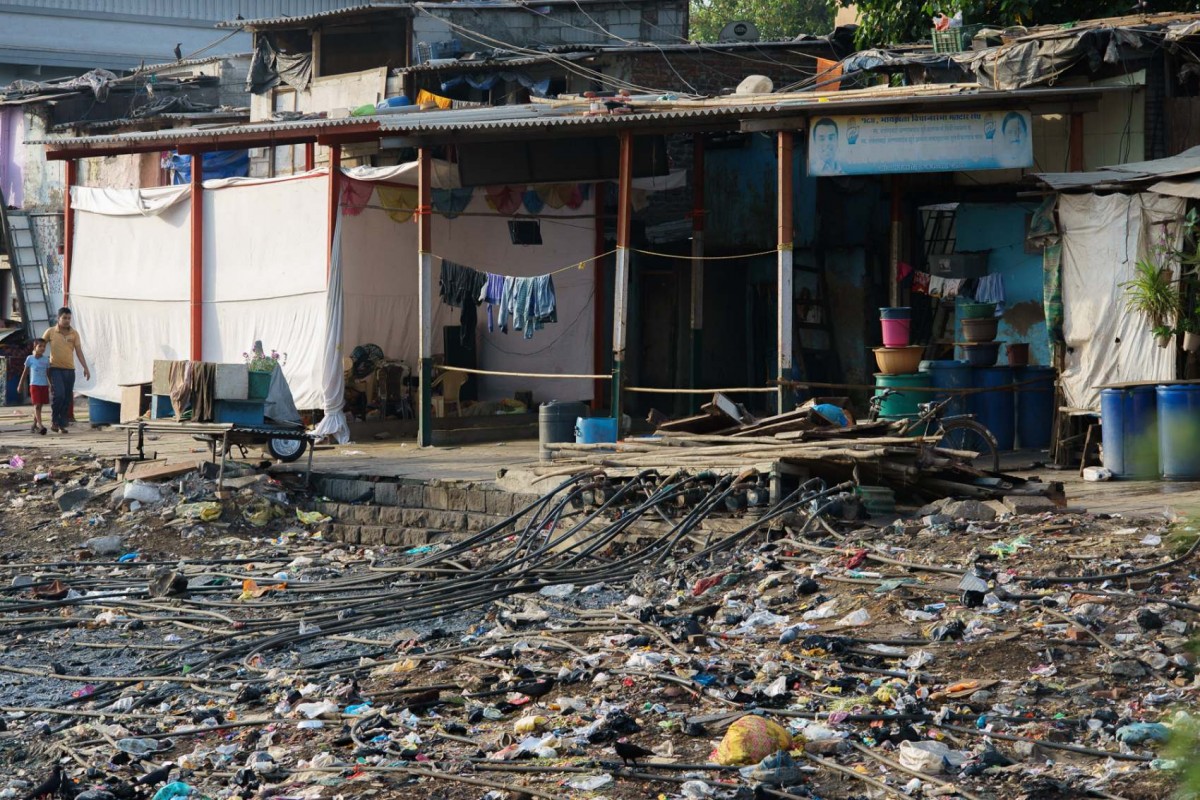 Those without a legal connection have no choice but to resort to informal sources and pay several times more. Seen here are floating pipes set up in a cooperative effort by local plumbers and authorities in a low-income settlement in south Mumbai.

Bombay became ‘Mumbai’ in 1995 and to prevent more people migrating to the city, the state issued circulars saying that water should not be supplied to those living in unauthorised structures post 1995. This inhumane policy was challenged by Pani Haq Samiti (a collective campaign of citizens and civil organisations) in the high court. 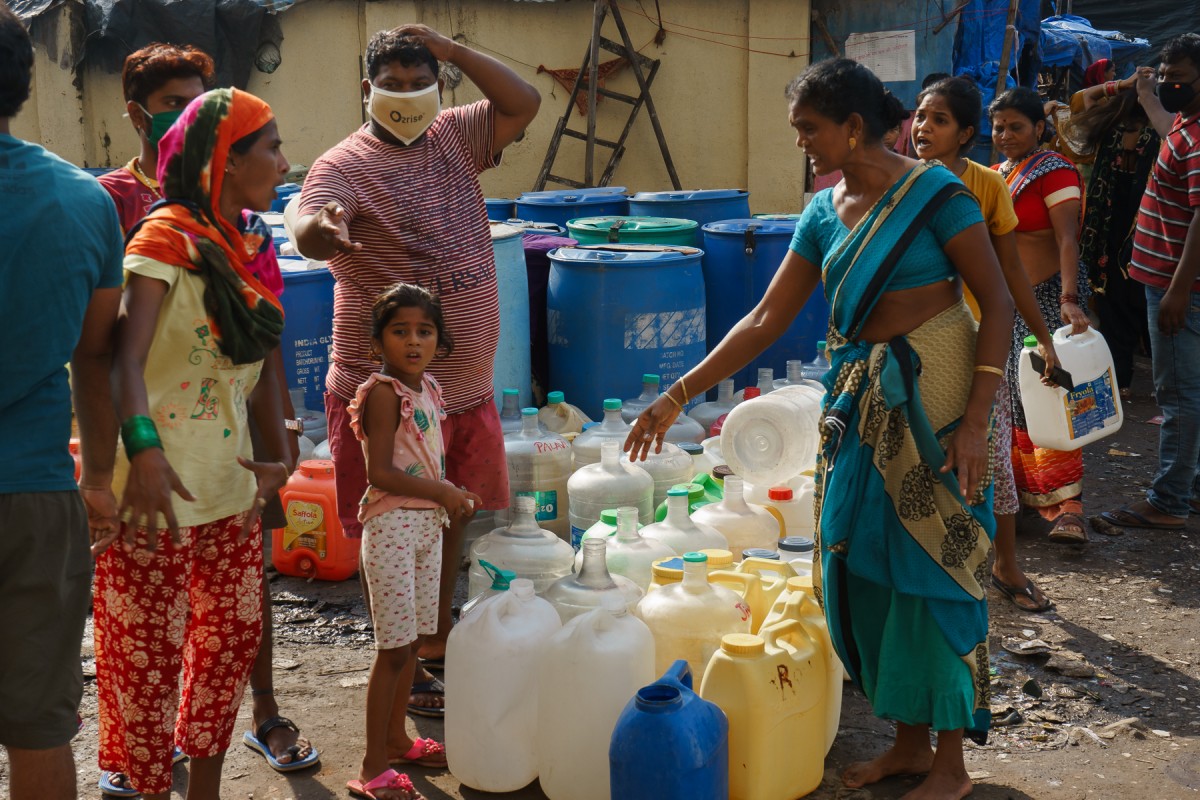 As the waiting time increased during the pandemic because of social distancing norms, quarrels over the quantity of water allotment or their position in the queue occurred more frequently in informal settlements.

In December 15, 2014, the Bombay high court ruled against the BMC, saying that “Right to get water is an integral part of Right to Life under Article 21 of the Constitution of India”. The ruling also made many more families eligible to apply for a water connection by extending the cut-off date of ‘notified’ slums from January 1995 to January 2000.

Despite the ruling, a piped water connection is an urban legend even for people who have been residents of the city for over a generation today. The ground reality is that putting together the list of documents required to secure a water connection (which also includes no-objection certificate from the landowner, certificate of good character by the local councillor, proof of residence before 2000) is a monumentally bureaucratic procedure and requires five families to jointly apply in a single application. 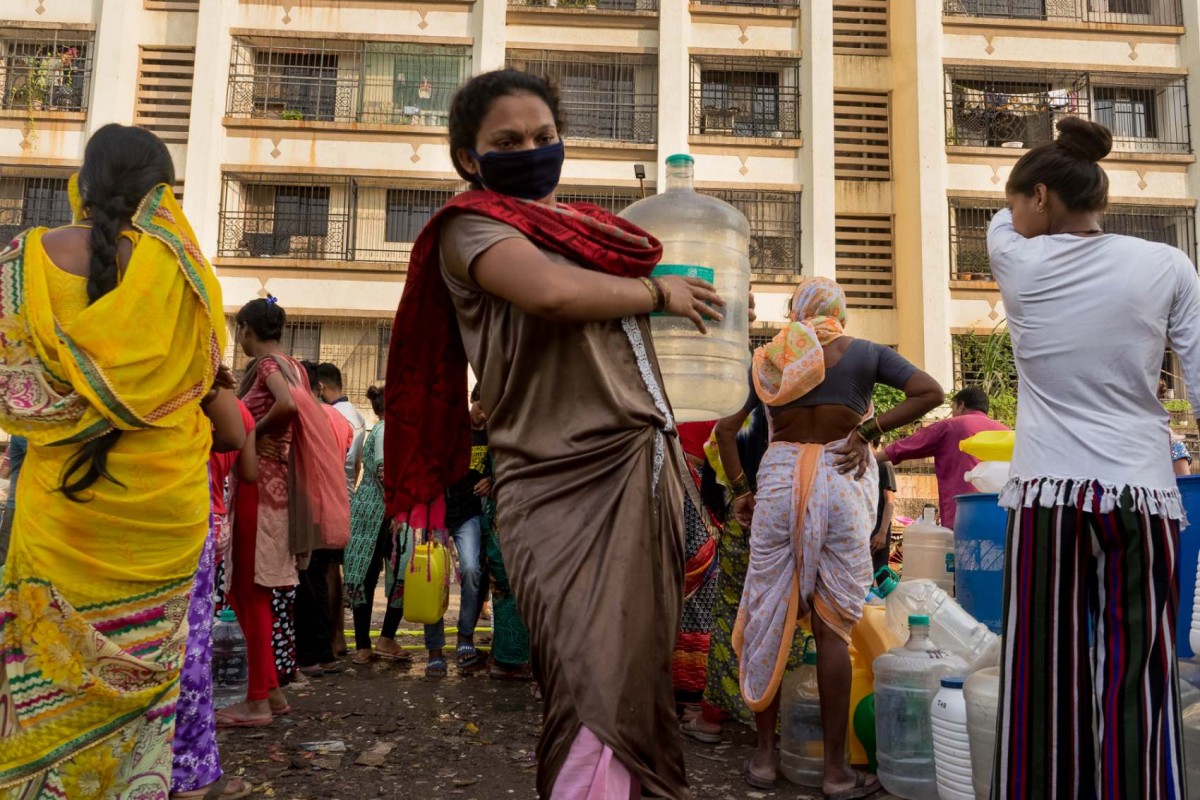 A resident of Siddharth Nagar (western suburbs of Mumbai) carries 20 litres, half of the family’s share for the week that was provided by the MCGM. No water was provided by the gated society opposite, and the community was forced to rely on overpriced private suppliers. In the non-notified slum of Kaula Bundar (also an informal industrial area), water is sold at over 40 times the original price. Pictured here are economic migrants going about their morning routine. Photo: Suraj Katra for Photography Promotion Trust

In many informal settlements (half of which are non-notified under the law), majority households access less than the 50 litres daily (below the minimum amount mandated by the World Health Organisation) for all their needs.

As per a recent report published by Pani Haq Samiti, nearly two million people living in Mumbai do not have legal access to water.

These citizens have been driven by circumstances like drought, poverty and land conflict to migrate to Mumbai, where opportunities to generate income are plenty – work in construction, sanitation, make deliveries, drive a taxi or hawk on the streets. But not everyone gets ahead by following the rules in a culture where ‘money speaks’. To beat the odds requires a combination of sheer determination, luck and resources. Uninterrupted supply of water enables livelihood, access to education and health.

Roughly 27-35% of the city’s water is unaccounted for and lost to leakages, faulty meters and unauthorised connections. Annually, this translates to revenue losses of over Rs 400 crore for the MCGM.

With the pandemic’s arrival last year, the lack of clean water access coupled with population density resulted in many of the city’s slum clusters becoming hotbeds for the coronavirus. The public health of those vulnerable was further compromised as no proper provisions were provided to those disconnected from the city’s water.

Activist and convener of Pani Haq Samiti, Sitaram Shelar, appealed to the high court on behalf of 33 informal settlements to urgently appeal for new water connections on humanitarian grounds. Despite this, barely any provisions were made by the MCGM. It takes 5 households to jointly apply for a water connection as per the BMC application. Pictured here, residents from GTB Nagar (central Mumbai) outside the local ward office who had been following up for over 7 months for a new water connection. 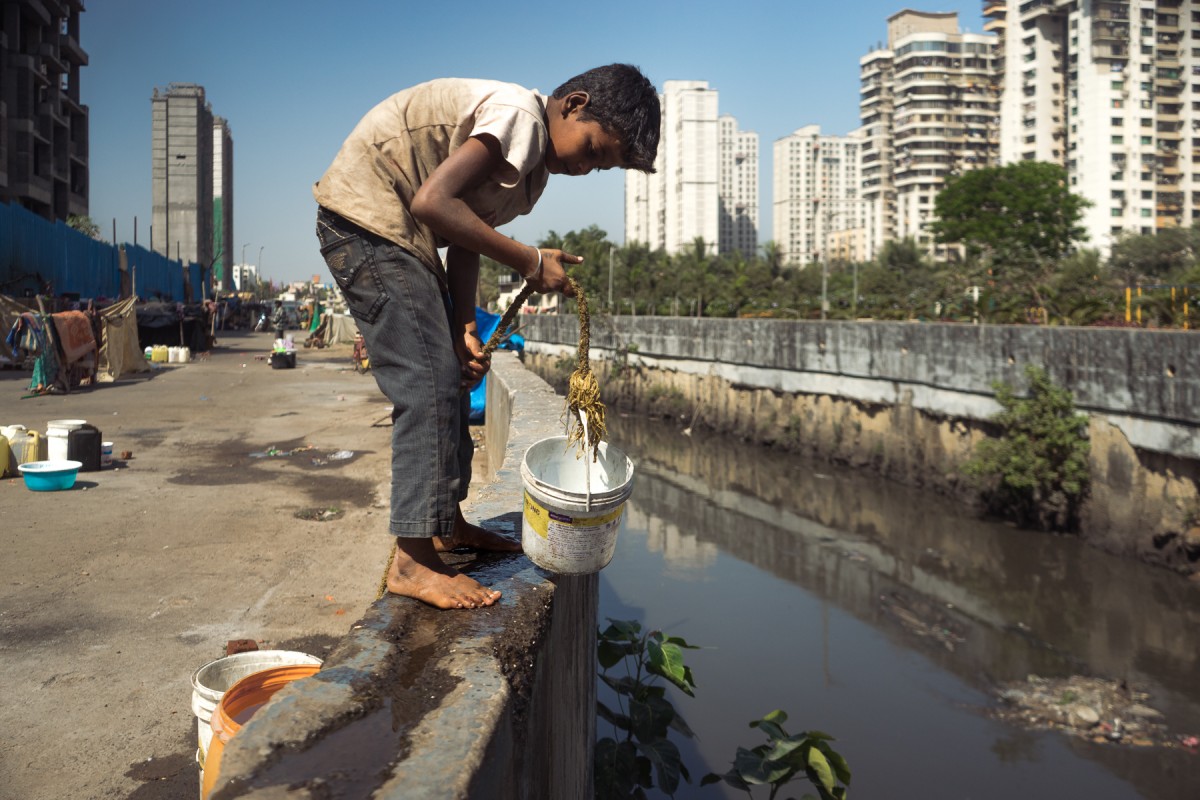 Anand, 14 (name changed), a homeless boy, could not manage to continue his free schooling. He spends over an hour each day refilling a water tumbler from an unknown leak flowing into the Eksar Nullah in Borivali (north of the city). His father works as a daily subcontracted sewage cleaner for the MCGM. 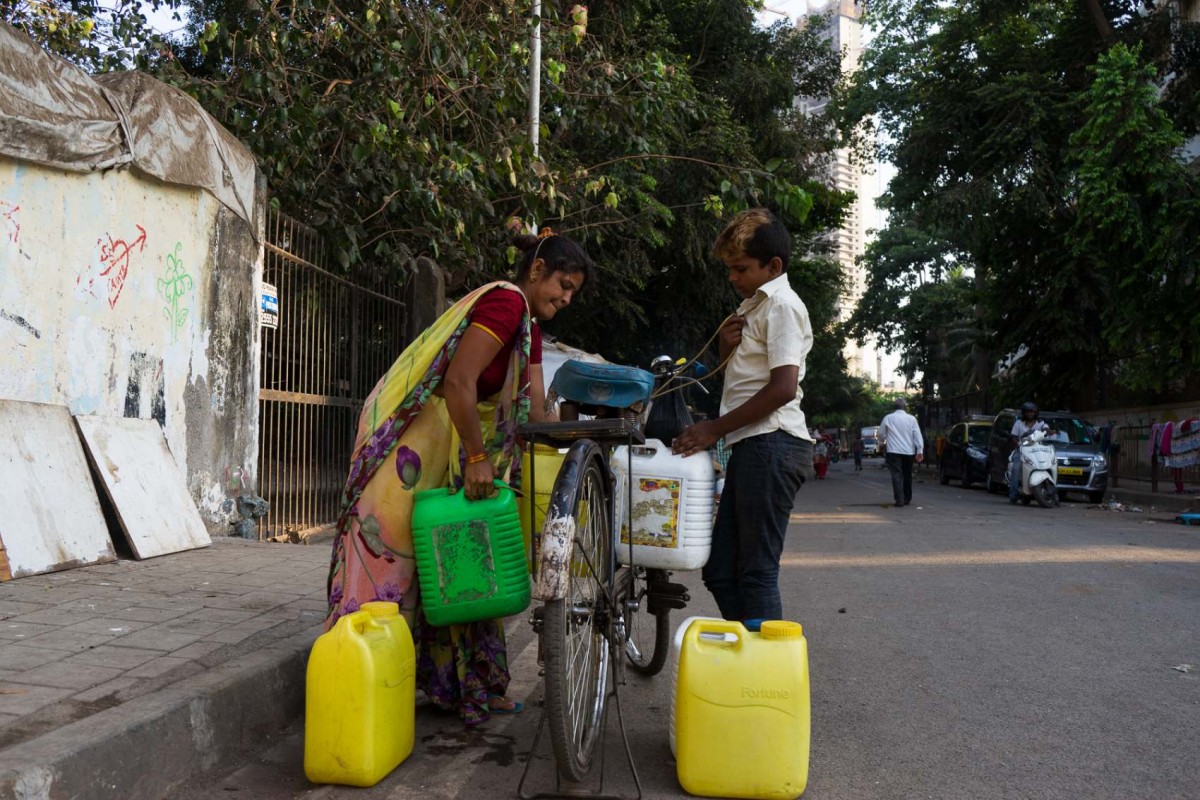 It is usually women who must take on the burden of water collection and storage for the household. Pictured in Lower Parel area of Mumbai. 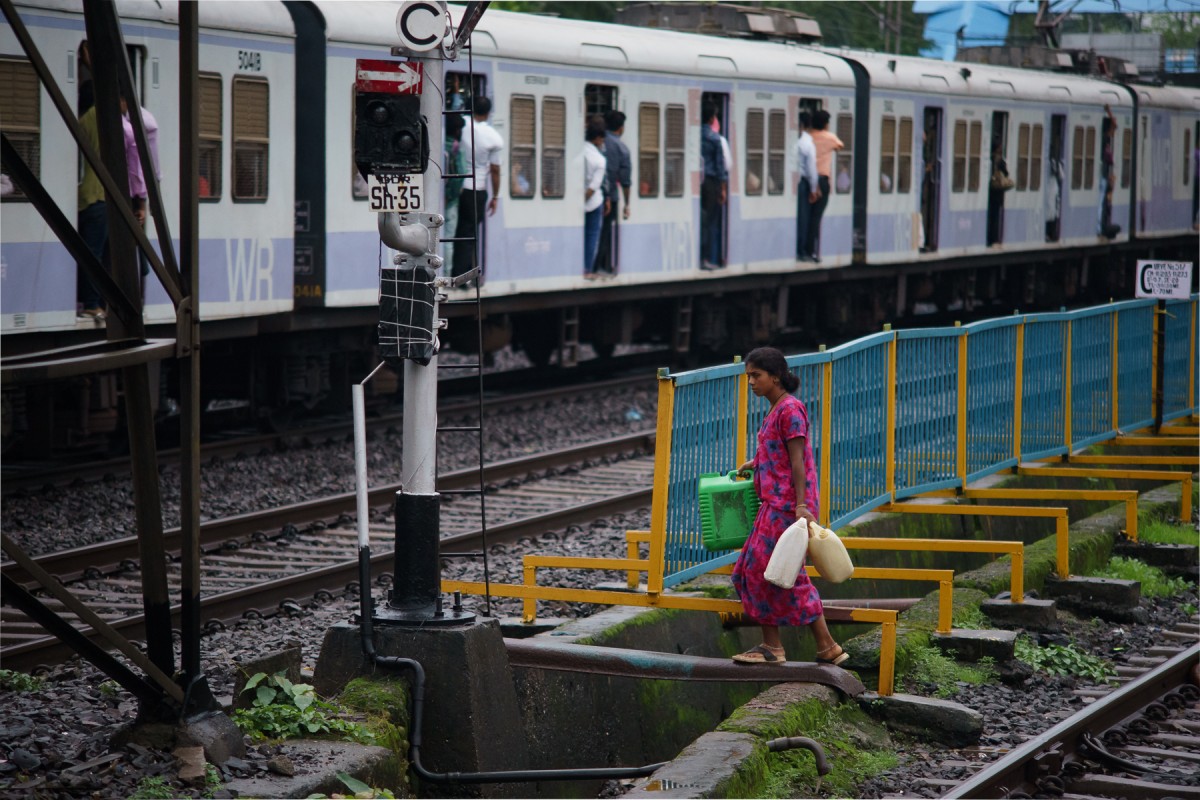 Settlers residing on lands owned by the railway are not eligible for a legal water connection as they cannot obtain an NOC. Pictured, a woman who daily crosses 7 tracks on the western railway line daily to fill water from an unknown leak. With unlimited water supply available at the turn of a tap at a highly subsidized rate (Rs.5.40 for 1000 litres) in every room, a direct correlation between consumption and price does not exist when it comes to water. It would be fair to assume that well-off citizens could never claim to understand how the water insecure live.

Suraj Katra is an independent photographer based out of Mumbai.