Moscow’s ‘Central Vista’: When Stalin Tried to Change the Face of the Russian Capital

The motivations behind the grandiose and ambitious 1930s plan to dwarf the Kremlin and Red Square were not very different from those in contemporary Delhi who want to redevelop Rajpath. The planned 'Palace of the Soviets'. Photo: Public domain

Moscow isn’t just a namesake sister city of Delhi, the two capitals have a lot more in common than meets the eye. Founded in 1147, Moscow, like the Indian capital, has been invaded, razed, pillaged, conquered, rebuilt and expanded a number of times. Both cities lost their ‘capital’ tag to newer cities and gained them back in the second decade of the 20th century.

The Kremlin and the Red Square are considered to be the symbols of Russia. For a first timer, no visit to Moscow could ever be complete without a visit to the area. If Joseph Stalin’s regime had its way initially, the St. Basil’s Church, Spasskaya and Borovitskaya towers and other buildings in the area that now make up the Unesco World Heritage complex would have been dwarfed by a enormous structure meant to be an unmistakable symbol of communism and the Soviet Union.

Palace of the Soviets

As is the case with the New Delhi Central Vista project, the USSR in the 1930s did not plan to demolish the most famous and symbolic structures that were built by a hated erstwhile regime, but wanted the older buildings to look rather small and insignificant next to a newer structure. Like a new parliament that seems to be the Indian government’s top priority, in the 1930s the ruling communist regime wanted to construct the so-called Palace of the Soviets to host the sessions of the Supreme Soviet, the most authoritative body of the USSR. The parallels do not end here. The Soviet Union in the early 1930s had a famine that killed millions of people, but the authorities were adamant on going ahead with the grand project, with the same determination that the present Indian government has for the Central Vista when a pandemic has taken four lakh lives (officially) and has driven millions into abject poverty. 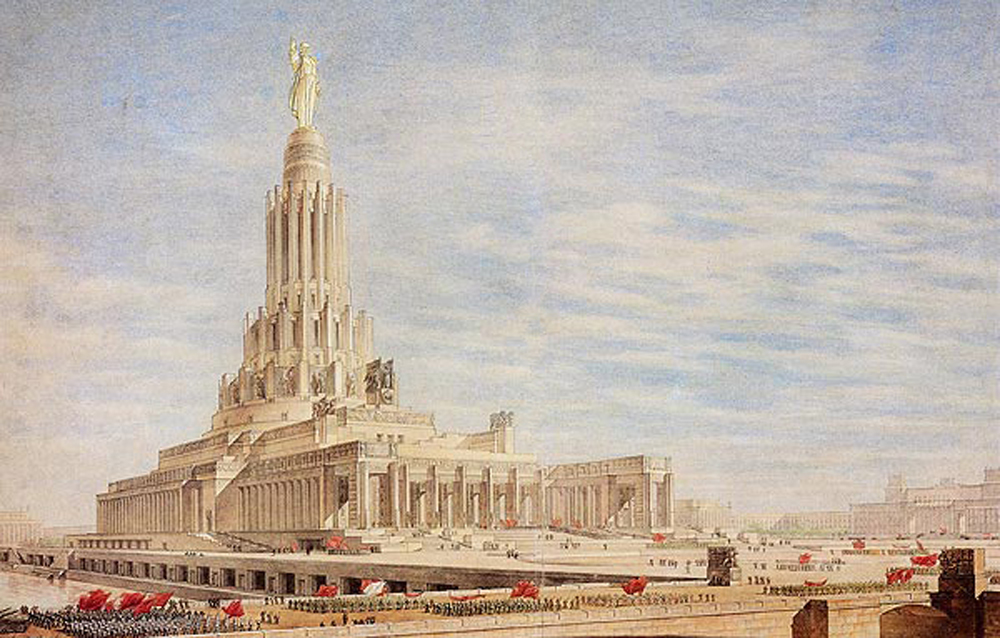 The planned ‘Palace of the Soviets’. Photo: Public domain

The Soviet authorities wanted the new palace to seat 20,000 people. Of course, a project of this magnitude in the heart of Moscow required the demolition of some existing structures. The unfortunate victim in this case became the Cathedral of Christ the Saviour, one of the world’s largest Orthodox churches. Built over a span of 40 years in the 19th century, within a stone’s throw away from the Kremlin, the building was, in 1880, the scene of the premiere of Pyotr Tchaikovsky’s 1812 Overture, composed to commemorate the Russian Empire’s victory over Napoleon’s army. Pre-World War II USSR saw little use for Orthodox Christian structures. After all, they believed the church was hand in glove with the Romanov family in oppressing the poor. Many older Moscow churches were spared, but this cathedral occupied prime and much-needed real estate, so in 1931, it was demolished.

Plans to build a mega Soviet palace were announced as early as the 1920s. From 1931 onwards, a series of architectural competitions were held for the design of the palace. The prize was actually spilt between three entries, but Stalin chose his favourite architect – Boris Iofan, a 42-year-old Jew from Odessa, who was a prodigy of prominent Italian architect Armando Brasini (an exemplar of Fascist architecture). Stalin was more than pleased with the Iofan-designed House on the Embankment, which was ready in 1931. The residential building meant for those ‘who were more equal than others’ contained 505 apartments, and even had amenities such as well-stocked shops and two theatres.

The Odessan architect’s highly ambitious design for a mega complex gained worldwide attention. This was an era when grandiose architectural projects were welcomed. Iofan’s design won a prize at the 1937 International Exposition of Art and Technology in Modern Life in Paris. 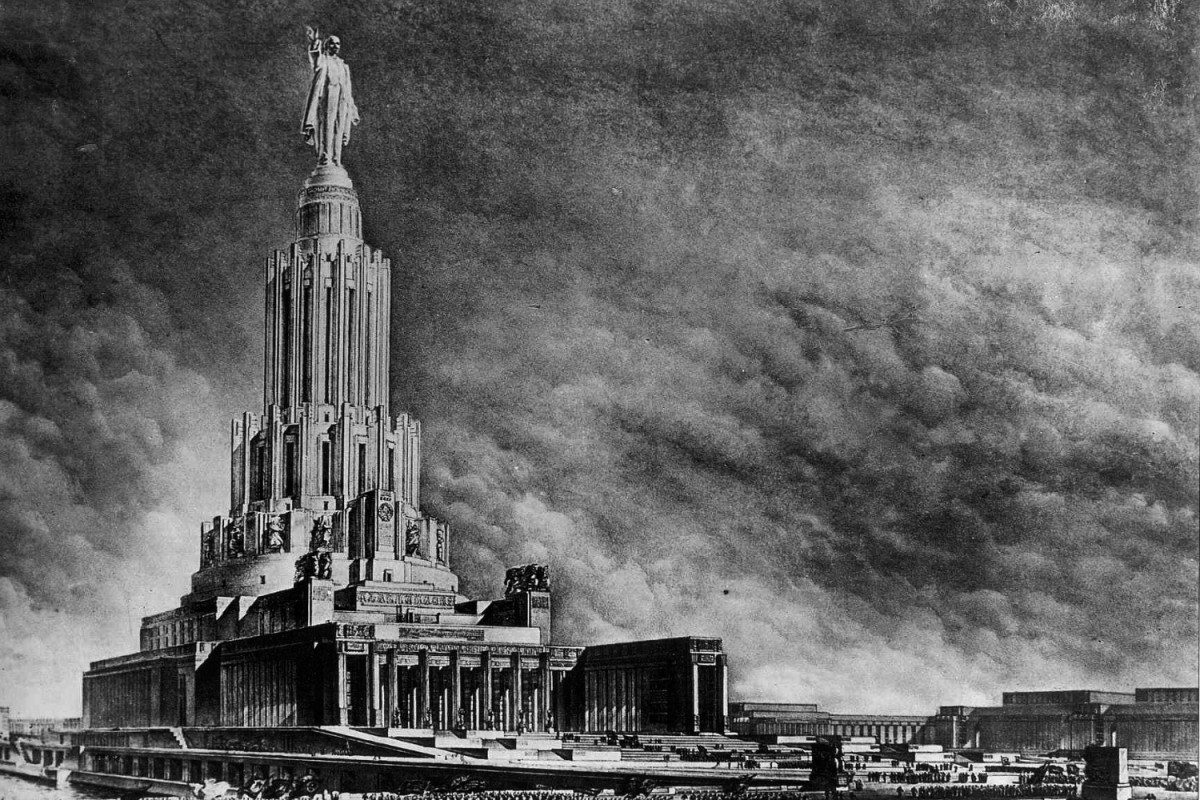 The design of the Palace of the Soviets. Photo: Public domain

While leaders in different states in 21st-century India are competing to have the world’s tallest statue, 90 years ago, the Soviets were obsessed with building a structure that would be much taller than the large skyscrapers of capitalist America. Since the Empire State Building was 381-metres tall, the design called for the new Soviet palace to reach a height of 415 metres. Combining neoclassical, art deco and Stalinist style, the building would be 130-metres wide and have an internal volume, which was more than that of the six tallest American skyscrapers.

Iofan’s prize-winning design underwent a series of alterations. The authorities kept him as the chief architect but formed a panel that comprised of Vladimir Shchuko and Vladimir Helfriech, two of the leading and most influential Soviet architects at that time. Iofan clashed with both architects. At times the duo of Shchuko and Helfriech operated separately from Iofan. As was the case for any major construction in the USSR, a bust of Lenin was obligatory for the new palace. Iofan wanted a giant statue on a standalone pedestal so that there would be balance between the statue and the building. His rivals thought it would be a better idea to put a giant statue of the revolutionary on top of the building, so that its height would be extended by another 100 metres! Others in the government wanted the head of the Lenin statue to be as big as the pillar hall of another Soviet building nearby.

The USSR at that time lacked the expertise to build such an enormous structure, as it did not have the same level of technology as the United States. As per the final design, the palace would weigh 1.5 million tonnes and need 350,000 tonnes of structural steel. 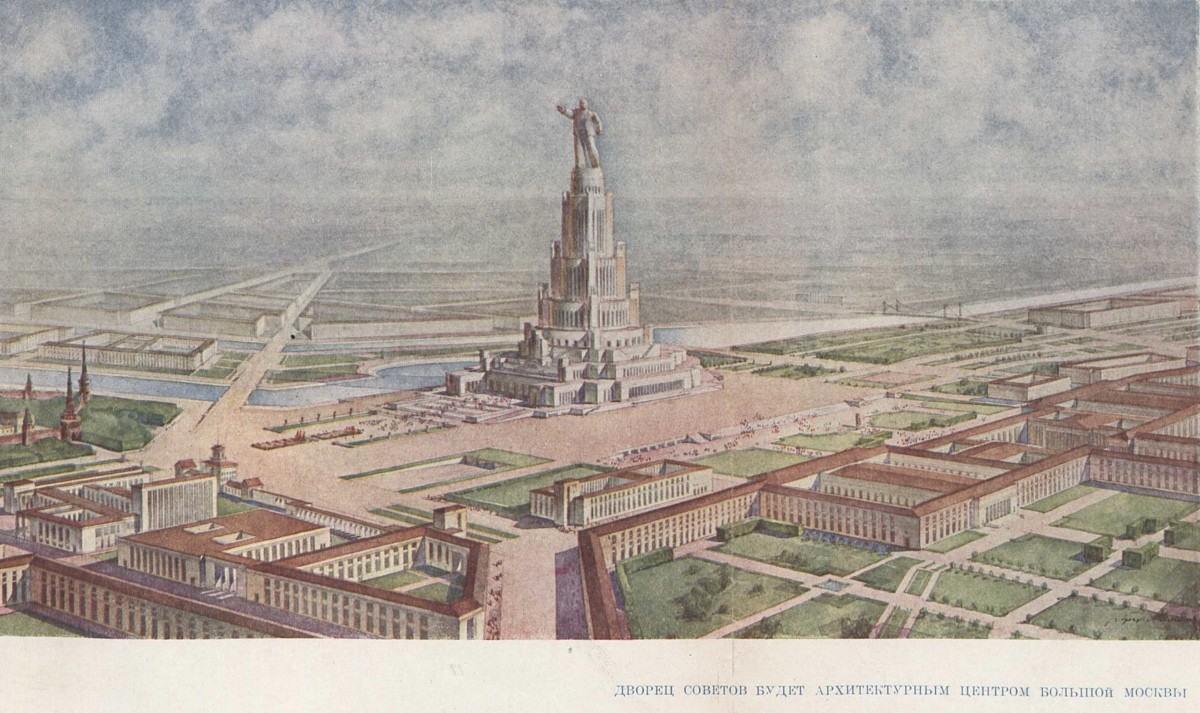 The Kremlin and Red Square would have been dwarfed by the new palace. Photo: Public domain

Shchuko and Helfriech travelled to the United States to examine the technology and practices in the country that was the forefront of the skyscraper boom. A few American consultants were hired for the project and this represented a rare example of transfer of technology from the United States to the Soviet Union. By the late 1930s work started in full flow. While the war had begun in the rest of Europe in 1939, the USSR was confident that Nazi Germany would not violate the Molotov-Ribbentrop Pact.

In 1939, after the frame of the palace rose above ground level, the design was featured on post cards and even in small propaganda films. A year later, the lower load-bearing columns were installed. Work continued at a rapid pace well into the middle of 1941, when the frame of the northern wing was largely finished.

Also read: A Life Beyond Capitalism: Reimagining a Socialist Future With Yanis Varoufakis

Operation Barbarossa changed everything. After Nazi Germany invaded the Soviet Union, the project was indefinitely suspended. The very survival of the USSR was at stake at that point, so the steel and other building material was required for the production of weapons and defence infrastructure.  As the war prolonged the palace structure was disassembled and scrapped.

Once the war was over, Stalin lost interest in the project.  The Kremlin and Red Square still continue to remain the focal point of Moscow and are considered by the public at large as the ‘heart of Russia’.

The Second World War claimed 27 million Soviet lives and completely destroyed large parts of the country, but the post-war rebuilding did not come in the way of other grandiose projects. Stalin continued to ensure that major infrastructure projects would be built. It was on his insistence that the older metro stations of Moscow, Leningrad and Kiev looked like palaces. His successor Nikita Khrushchev made sure that the future lines of the underground systems in Soviet cities looked plain. 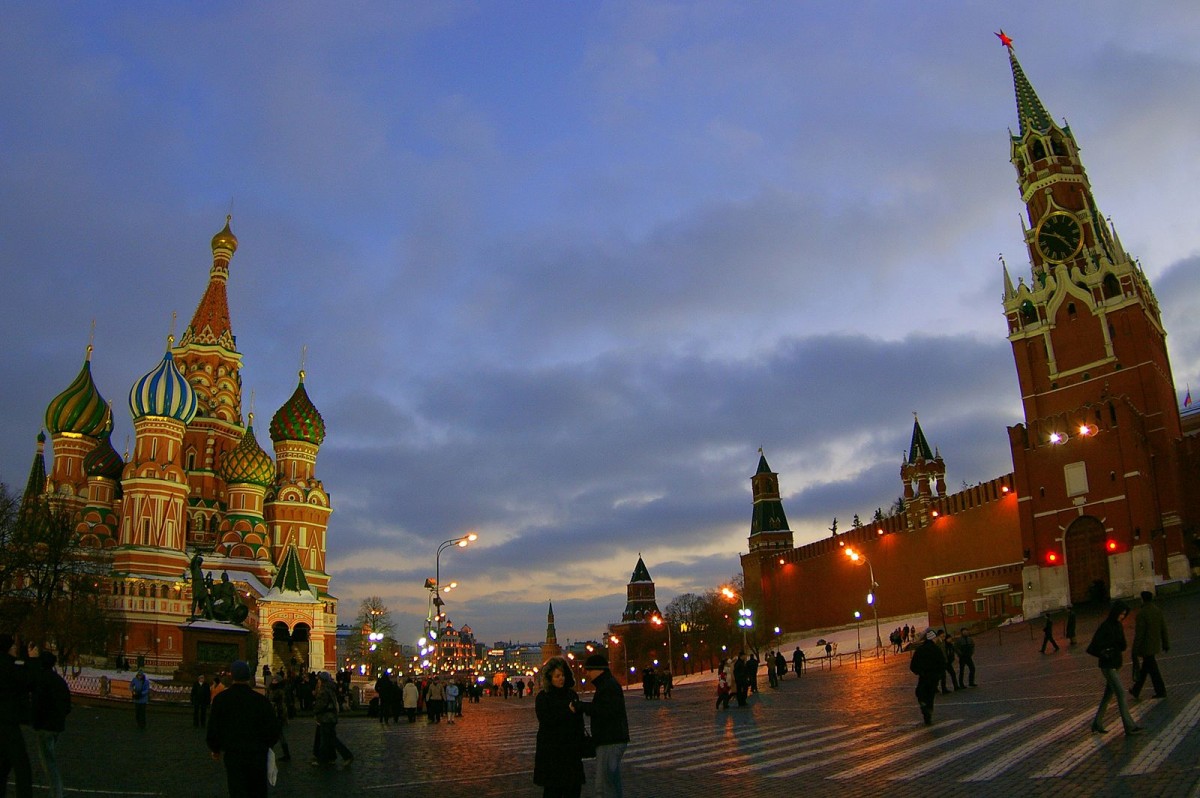 The foundation hole for the Palace of the Soviets remained untouched until 1958, when Khrushchev decided to convert it into the world’s largest open-air swimming pool. In 1990, the land was handed back to the Orthodox Church, which wanted to rebuild the cathedral. In 1994, the pool was demolished and the construction of a replica, powered by donations from one million Muscovites, began a year later. The new cathedral, which was consecrated in 2000, is a major Moscow landmark now and is the third tallest Orthodox Church in the world. Some controversial innovations by celebrity architect Zurab Tsereteli have angered a number of architects and heritage activists.

Stalin did manage to get some impressive skyscrapers, with the construction of the so-called Seven Sisters in Moscow. These skyscrapers that include the Moscow State University building and the Russian Foreign Ministry headquarters were built between 1947 and 1953 in an elaborate combination of Gothic and Baroque styles. They blended in with the landscape of the Russian capital without disturbing the historic city centre and are all famous landmarks in themselves.

Iofan unsuccessfully bid to design the Seven Sisters, but had quite a few projects in Moscow to his name. He was a resident of the elite House on the Embankment until his death in 1976.

It took a world war to save Moscow’s historic city centre from a monstrosity that would have changed the face of the capital. With the courts giving one green light after the other for the expensive Central Vista project, nothing short of a miracle can save the historic centre of New Delhi.

Ajay Kamalakaran is a writer and independent journalist with a special interest in Russia and the former Soviet Union. He is based in Mumbai.