If the Modi government wishes to create an enduring legacy out of Delhi's architecture, it must make sure its new Delhi does not become the graveyard of its dynasty.

In mid-October, the architecture firm HCP Design won the bid to redevelop parts of Lutyens’ Delhi after the government announced plans for its redesign.

The plan is meant to modernise the capital by 2024, including the Parliament and central secretariats by making them environmentally friendly, refurbishing their interior, and adding more buildings.

Delhi has already been privy to redesigns with the British and the Mughals, making the Modi government’s plans analogous to their desire of leaving behind a legacy. And yet, the history of Delhi’s last three revamps holds a warning against the hubris of its rulers. To understand this warning, let us consider these histories.

Lessons from a past glory

On the outskirts of Delhi stands the Tughlaqabad Fort, considered the third city of Delhi by historians. Delhi, for years, had been subject to invasions from the Mongols in the 13th century. Additionally, the population of Delhi had been increasing.

For these reasons, Delhi’s former ruler, Ghiyas-ud-din Tughlaq, built Tughlaqabad. It had its obvious advantages: perched up on the high ground, it proved ample protection, and the site also had stone quarries that provided building materials. It also had the potential to host a dam, creating a water supply which the previous city of Delhi had started to feel the shortfall of.

Tughlaqabad did not survive long. It was inhabited in 1323 or 1324, but was abandoned only 10 years later. A popular legend attributes its demise to a curse from Sufi saint Nizamuddin Auliya, who said, “Ya base Gujjar ya rahe ujaad,” translating to “either the fort will be occupied by Gujjars, or it will be empty.”

Today, Tughlaqabad looks like a graveyard, only hinting at its past glory. 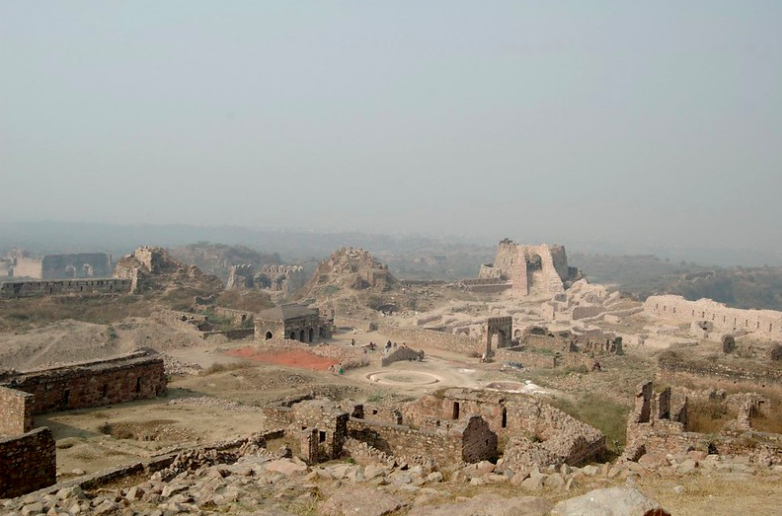 The next major rebuilding was conducted by Shah Jahan.

In 1639, he shifted his capital from Agra to Delhi after the construction of Shahjahanabad, better known as ‘Old Delhi.’ It was Shah Jahan’s ambition to revive the great ‘Hazrat Delhi’ of the Sultanate with a new city, as he wanted a lasting legacy.

Agra, his capital, was increasingly unsuitable. So, his architects, engineers, and astrologers selected Delhi as the perfect capital given its history, its location on the banks of the river Yamuna, and its central positioning in the empire. 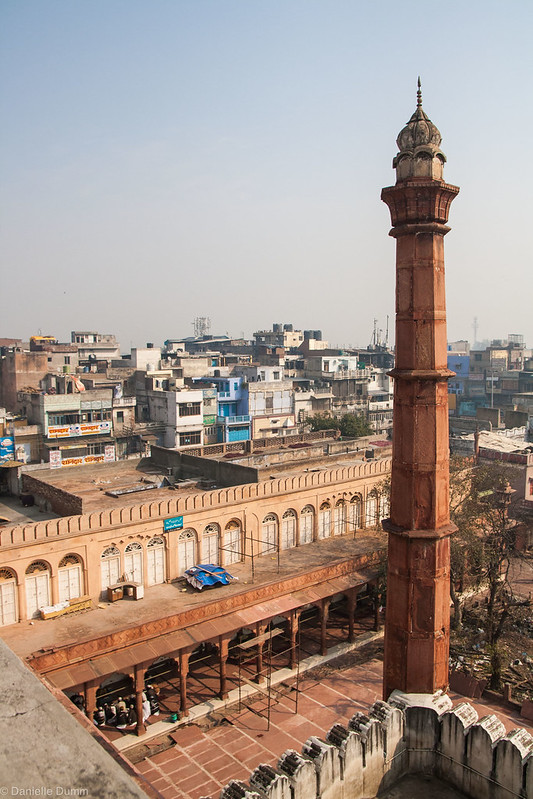 After all, the prestige of Delhi’s imperial past extended to its mythic associations with Indraprastha from the Mahabharata. Adding to this prestige was that it was home to merchants, traders, and intellectuals from around the world, including its links to Sufi saint Nizamuddin Auliya, whose bier was lifted by the then Sultan Mohammad bin Tughlaq himself, and who would be revered by both Babur and Akbar.

In reconstructing Delhi, the Mughals were well aware of its status as a political and religious symbol.

The new city was expensive, costing at least Rs 14 million. Yet, the Mughal economy could withstand such expenses, given its large treasury. These costs were primarily due to the construction of the famous Red Fort, bazaars, including Chandni Chowk, canals, gardens, temples, mosques, havelis and other buildings that continue to add to the charms of Old Delhi.

The jewel in Britain’s crown

Delhi’s glorious history also drew the British Empire, making it tempting as the site of the construction of a British legacy in India. This was the beginning of Lutyens’s Delhi.

The year was 1911. King George V was in Delhi for the third ‘Delhi Durbar’—being coronated as the ‘Emperor of India.’ It was a ceremony celebrated with much pomp and circumstance with all the princes and maharajas paying their respects. At the end of the ceremony, the British revealed plans for Delhi.

Between the ridges of Delhi in the West and Shahjahanabad in the East, there was a plan to create a British city infused with Indian architecture, symbolising a union of the two countries.

Along with Delhi’s legacy, there were practical reasons for the British to build ‘New Delhi’, and to change the capital from Calcutta. The years surrounding the 1911 Delhi Durbar were politically turbulent. Various national movements were taking force in the early 20th century, none more so than in Bengal, the region of their erstwhile capital.

This is why, in 1905, the Viceroy of India Lord Curzon partitioned Bengal. It led to communal tensions with many people divided by the new boundaries between majority Muslim or Hindu territories. Appeals, petitions, and pamphlets flooded the British government’s offices till the protests turned violent. The Bengal partition had not worked.

Delhi’s legacy and the politics in Bengal pushed the British to announce a shift in the capital of the empire from Calcutta to Delhi. This was not met well. One newspaper from Calcutta, The Englishman, said, ‘If the government goes to Delhi, Calcutta will suffer.’

Meanwhile, in London, one British newspaper called Delhi the ‘graveyard of dynasties,’ most likely alluding to the former rulers of Delhi, the Mughal Empire, and the Delhi Sultanate prior to that.

Thus, New Delhi was built to reassert British control. Accordingly, the design would follow a similar pattern. The architects for Delhi were Sir Edwin Lutyens and Sir Herbert Baker, who did not like Indian architecture, and instead sought to create ‘imperial architecture’. 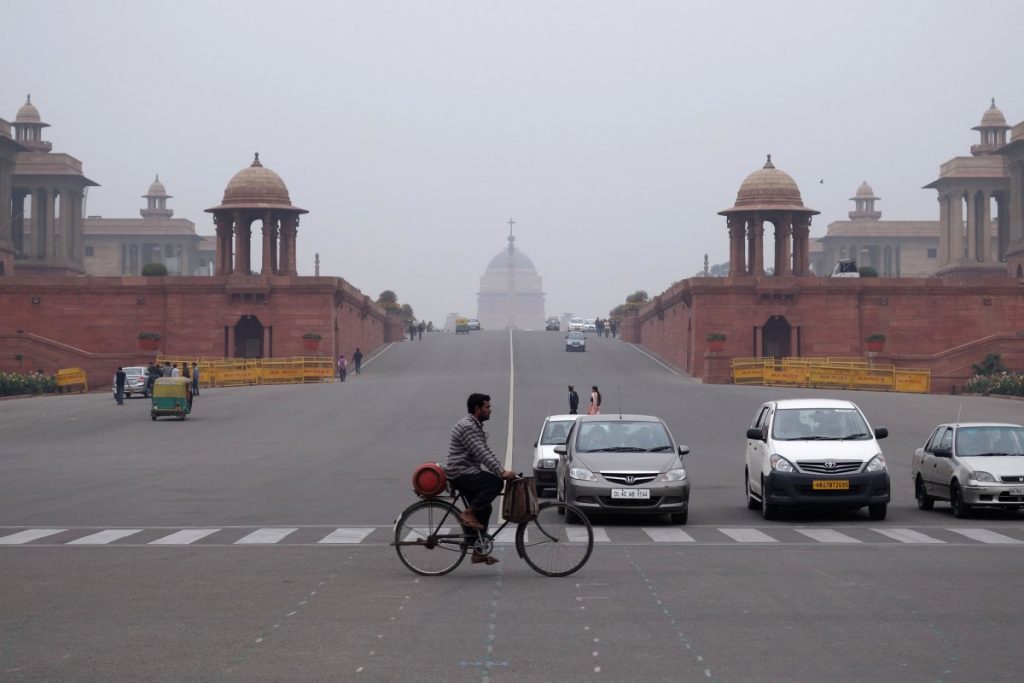 Lutyens considered Indian architecture to be ‘childish ignorance’. Baker, also not a fan of Indian architecture, conceived of his designs in the neo-classical form, inspired by the works of ancient Rome and Greece. He believed moving the administrative buildings or secretariats up on Raisina Hill next to the Viceroy’s House would express the ‘unity of the viceroy with his government’.

Despite little affection in either architect for Indian architecture, they had to consider practicalities. That is when they were forced to rely on Indian architecture. The climate limited certain design structures, and they borrowed various aspects of Mughal architecture to create better plans for air circulation. All this helped in ‘Indianising’ the administrative buildings.

Choices regarding the locations and positions of the buildings were carefully made to symbolise the unity between India and Britain. The placement of the new city alongside the old one, and the use of materials like red sandstone, and design elements like pierced stone screens, chattris, and elevated dome-shaped pavilions were all utilised with this aim in mind.

Given these imperialist connotations, as beautiful as Lutyens’s Delhi is, it remains an awkward reminder of the capital’s, and broadly India’s, colonial legacy. Since Independence, some have voiced concern over the aesthetics of Lutyens’s Delhi, calling it the  ‘architecture of power’, or a symbol of alien imperial rule.

Perhaps the prices of the homes also contribute to Lutyens’s Delhi’s imperial aura, given they are for the wealthiest, with some properties selling for Rs 600 crores. These homes are surrounded by gardens to add to the beauty of the neighbourhood. The green swathes were originally added to keep out the noise from Shahjahanabad for British officers, creating an impression of aloofness.

Today, those who live there might create the impression that they are continuing this colonial legacy.

A graveyard of dynasties?

All this returns us to the present situation. The government may have accepted the bid for redesigning, but the extent of changes is unclear. What is clear is that this government, like the British and the Mughals, wants to establish a new identity.

If plans to significantly alter Lutyens’s Delhi cement, then it would fit a general pattern within world history, most notably in Paris between 1853 and 1861. During that period, the city was revamped from having slums to tree-lined avenues. Critics, then as today, saw it as showy imperialism with little regard for the economy.

The Mughals symbolised their imperial glory through Shahjahanabad; the British did it through New Delhi. One was an empire in the 17th century based on rulership through autocracy, while another was a colonial empire ruling hegemonically.

Today, however, matters are different. India is a democracy with a government meant to serve its people. Remodelling Lutyens’s Delhi in today’s India will be costly, especially given the state of the economy. Currently, the rupee is performing poorly, with a widening fiscal deficit. Recently, the IMF lowered its GDP growth projection to 6.1% from 7.3%. Given these trends, an impending recession looks even more threatening given the government’s limited capacity to put together stimulus packages.

If the government wishes to proceed with plans to remodel Lutyens’s Delhi, then it should note a warning from history: Shah Jahan was deposed by Aurangzeb nine years after the creation of Shahjahanabad. The British were removed a mere sixteen years after creating their city.

As far as democracies are concerned, nine and 16 years of one-party rule is a long time. But the current regime hopes for more—their proposal states, ‘These new iconic structures shall be a legacy for 150 to 200 years at the very least’ after the revamping.

If the Modi government wishes to create such an enduring legacy, it must make sure its new Delhi does not become — in the words of that British newspaper — the graveyard of its dynasty.

Shubhan Nagendra is a history major at the University of Pennsylvania