Over the last 130 years, all the tributaries of Yamuna that carried fresh water to it have become its largest pollutants. Most writings on the Yamuna, especially those dealing with the problems of water supply in Delhi, begin by stating that the river is in dire straits. It is often said that the lifeline of Delhi is dying, and unless immediate efforts are put in place to save the river, the city faces a bleak future.

Like all generalisations, these statements too need to be taken with more than a pinch of salt.

Most old cities are located next to rivers. When people gave up a life of wandering and moved up the ladder of social development – evolving from being mere hunters and gatherers into agriculturists – they looked at perennial sources of water for their crops, and rivers were a natural choice. It is these establishments that later grew into cities.

One would imagine that cities would spread out on either side of the river, but this does not seem to be the case – certainly not in the case of ones that have grown along the banks of Yamuna and Ganga. None of the old cities located along the course of Yamuna – Baghpat, Delhi, Mathura, Agra, Etawah and Firozabad – as well as the cities that have flourished along the course of Ganga – Benaras, Haridwar, Kolkata, Patna, Kanpur and Ghazipur – are spread on both sides of these rivers.

All of them – except for the twin cities of Prayag and Allahabad, now known by the united moniker of Prayagraj – favour one side of the river. Even in the case of Allahabad, the spread along both sides is caused by the confluence of Yamuna and Ganga. The two rivers enter from two directions and flow in the third, cutting up the plain into three rough triangles.

In sum, only one bank of the river has been used for inhabitation in most cities, and the probable reason is elevation – one side would be less prone to floods. This certainly seems to be the case in Delhi, where the land rises from the west bank of Yamuna and continues to rise all the way to the Aravalis.

Also read: Unless We Clean Our Drains, Delhi Will Soon Drown in Its Own Filth

All seven capitals that were built between tenth and 11th century were located either on the Aravalis – Mehrauli and Tughlakabad, on the plains to the east of the Aravalis – Siri and Jahanpanah or on the west bank, Deen-Panah/Shergarh/Purana Quila, Firozabad/Kotla Ferozeshah and Shahjahanabad/Purani Delhi.

Since they were all at a level higher than the Yamuna, the option of using the river’s water to sustain the city was non-existent. All the capitals used sub-soil water that was tapped through deep wells or step wells. Most had their own rainwater reservoirs, which is why Delhi has many localities with Hauz as a prefix –Hauz Khas, Hauz Rani, Hauz-e-Shamsi, Neela Hauz. There are others that have Jheel as a suffix, like Najafgarh Jheel, Naini Jheel, Bhalswa Jheel.

There were more than 600 big or small lakes, reservoirs, ponds and barrages. A majority of them have disappeared, been encroached upon and deliberately filled with construction waste. 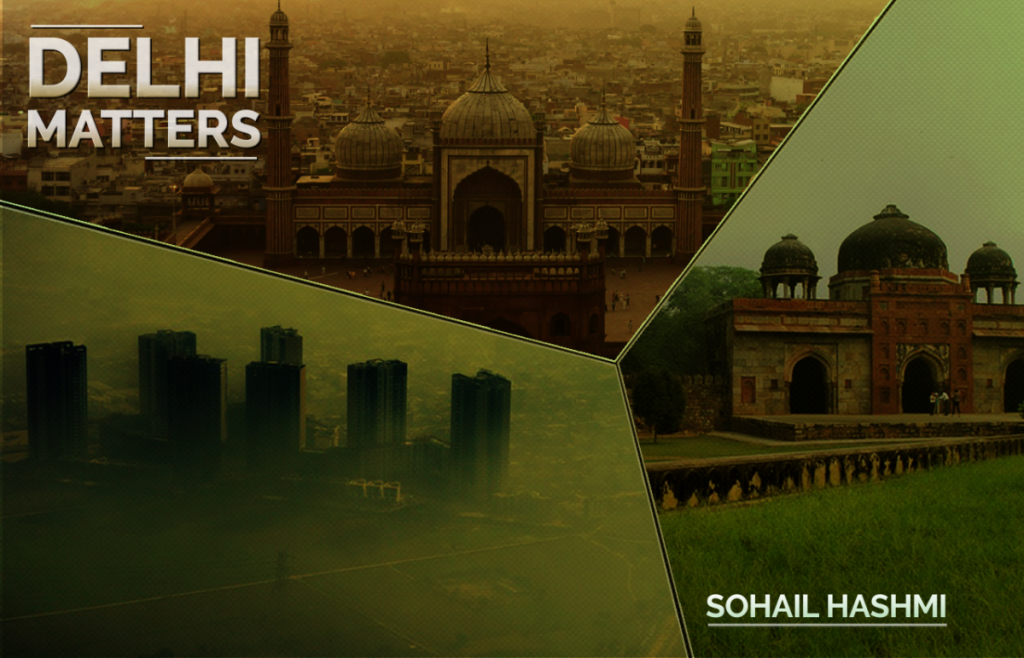 Some of the lakes that have disappeared include the massive one that existed between Tughlaqabad and Adilabad fed by a stream running through it till 1825 and later. Even today, the deepest part of the ground turns into a largish pond every monsoon. The space that was the lake is being built over right now.

The lake formed by the barrage of Muhammad bin Tughlaq had water till the early decades of the 20th century. The part that was the lake now houses the Saket District Court and the DMRC housing colony.

Not even a trace remains of the huge reservoir built by Feroze Tughlaq near his Hunting Lodge at Mahipalpur. The Surajkund lake, built according to tradition by Surajpal, is now dry. As is the Badkhal Lake. Anangtal at Mehrauli,, associated with Anangpal is lost forever. Jahangirpuri lake, the Talkatora lake and the hundreds of baolis that lay scattered all over the land that is now the megapolis of Delhi are also gone.

These and hundreds of other water bodies, lakes, ponds, stepwells and kunds provided potable water, helped irrigation, provided water for the cattle and were nesting sites for water birds, deer, chinkaras, blue bulls. They were a source of livelihood for fishermen and cultivators and were aquifers that fed the sub-soil water. They have all been destroyed in the last 100 or so years, the bulk of them in the last few decades.

The drying up of all these sources of water that used to trap the monsoonal water run-off has led to increasing pressure on the flow of the Yamuna. None of the seven capitals built in Delhi over the last 1000 years had used the water of the river. The water of Yamuna and its over a dozen tributaries was used by the peasants, washermen and fisherfolk. The residents of the capitals used the wells, tanks, kunds and the stepwells.

Kotla Ferozeshah, Purana Qila and the Lal Qila – the three cities located on the west bank of the river – tapped underground streams and had built huge baolis on them.

The massive baoli inside the Hayat Baksh garden of the Red Fort that had been cleaned up and restored by the ASI once the army moved out of that area had plenty of water that was similarly used to irrigate all the lawns. The large stream that fed the baoli dried up virtually overnight.

Feroze Tughlaq who built a network of canals for irrigation carried the water of Yamuna through the dry channel of the Ghaghar from Hansi to Bala Hissar (Persian for high walls), a city that he had built.

When he started building Ferozeabad (Kotla Ferozeshah of the present), he apparently commissioned the extension of the canal towards Delhi to carry water to his new capital. Work started simultaneously on the canal at the other end at Ferozabad as well. Ferozeshah was unable to complete the work on the canal and it has been said that Akbar and Jehangir had the canal repaired and Shah Jahan’s engineers extended it 130 kms to Delhi to bring the water of the Jamuna from Hansi and Hissar to Delhi.

The part of the canal built by Ferozeshah in Delhi was used in the time of Shah Jahan’s engineers for water to flow through the Akbarabadi Bazar, later Faiz Bazar, also known as Daryaganj, because the stream flowed through it.

Why did the three cities built on the bank of Yamuna not use its water? Is there some truth to the popular story about the water of Yamuna in Delhi not being fit for drinking, and is this the reason that people living so close to the river continued to rely on water from the wells, stepwells and ponds. Also, is this why Ferozeshah was building a canal from Hissar to bring the river’s water to Delhi, and is it because of the same reason that Ali Madan Khan and Sa’adat Khan extended the canal to bring water to Delhi?

Over the last 130 years or so, all the tributaries of the Yamuna that carried fresh water to it have become its largest pollutants. The Najafgarh Nalah and the Barapulla Nalah being the largest pollutants, carrying huge quantities of untreated effluents, sewage, dissolved chemicals, industrial dyes, motor oil, chrome, mercury, arsenic and what have you into the river.

The river that was never the lifeline of the city was made into one. All other sources that had served the residents for over 1000 years were abandoned, thus a river that had lived for millions of years was killed in less than 70 years of it becoming the lifeline.

The Jamna does not pollute itself, we do. We have to ensure that the tributaries of yore and the nalahs of today do not carry any pollutants to the Jamna. We have to set up hundreds of small STPs all along the course of Sewa Nagar, Kidwai Nagar, Chiragh Dilli, Najaf Garh, Trinagar, IIT Qutub Hotel, Dilli Haat, Dayal Singh College, Defence Colony, Lajpat Nagar and other nalahs, and clean every drop that flows into the Jamna. Clean the nalahs and the river will get clean – 65% of the pollutants floating and dissolved in the Jamna originate in Delhi.

We have to clean our act and we have to revive our water bodies, we have to stop pressurising neighbouring states to give us water while we continue to pollute the Yamuna and force everybody living downstream of us to live off our wastage.