In Photos: With Workers in Crisis, UP's 'Brass City' Is Losing its Sheen

Skilled artisans are leaving the industry, and the ones who stay are having to make do with meagre incomes and hazardous working conditions. 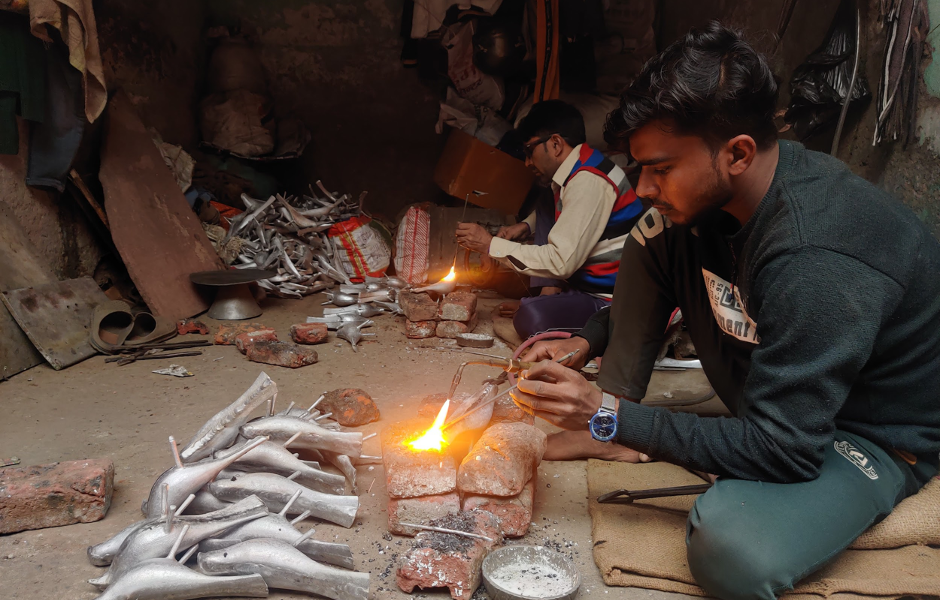 Moradabad (Uttar Pradesh): Islam Nagar in Moradabad’s Karula was once famous for its fine craftsmanship of brass products. Many other localities too were hubs of brass work.

Now, workers in tiny one-room houses that double up as industrial units sit dejected, working in hazardous conditions for not much in return.

Moradabad is no longer the “Brass City” that it is referred to as, workers say. Some have also left the industry for better pay and working conditions. 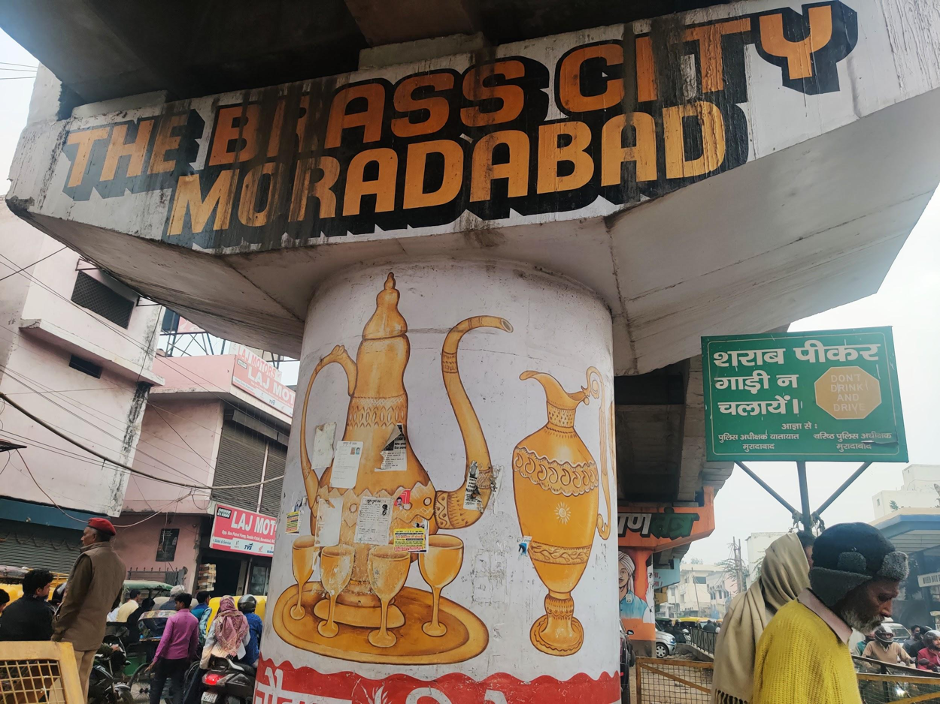 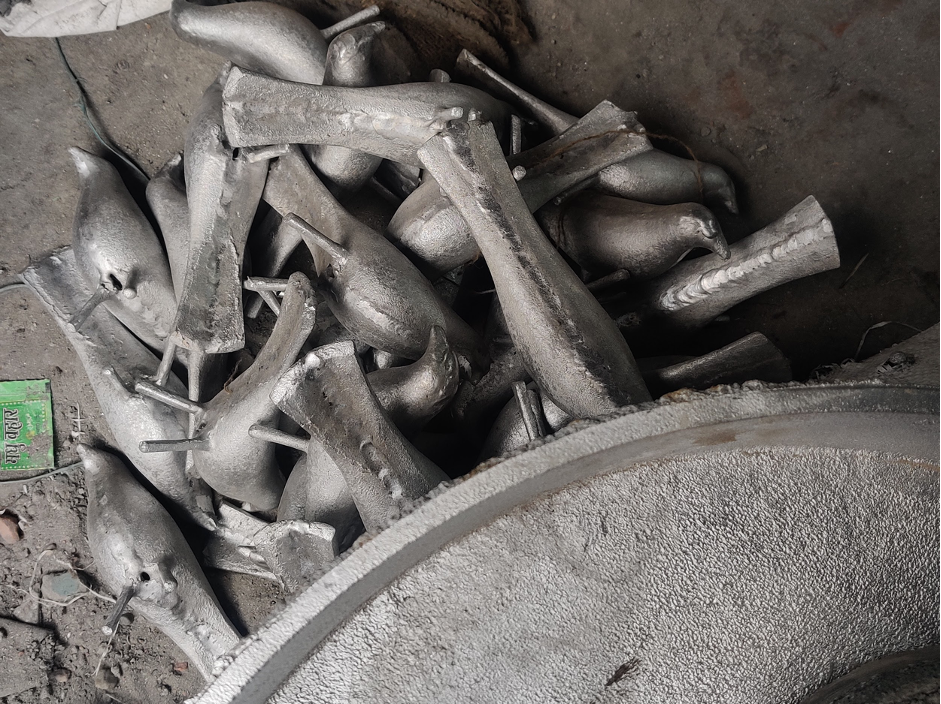 Sami Ahmad is one such worker. Forty-five-year-old Ahmad says that he was “forced” to quit the brass industry as he had to feed his family. Earlier employed in the shaping and sculpting of brass products, he now works as a plumber.

Coal had become too expensive, he tells The Wire. 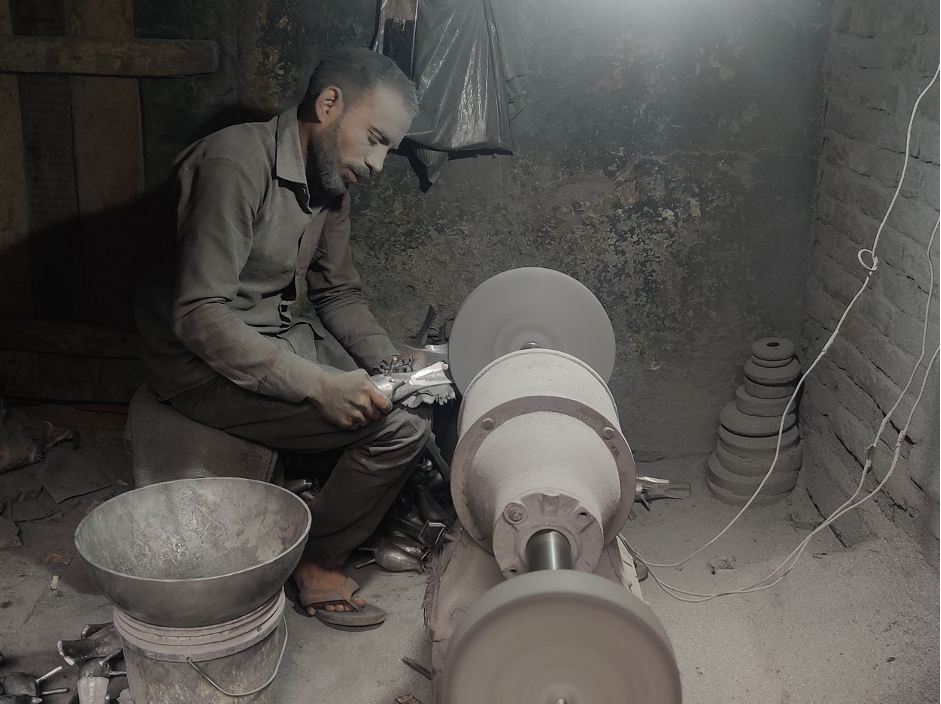 In the brass industry, every worker is involved in one stage of production as each stage requires a specific skill or experience. 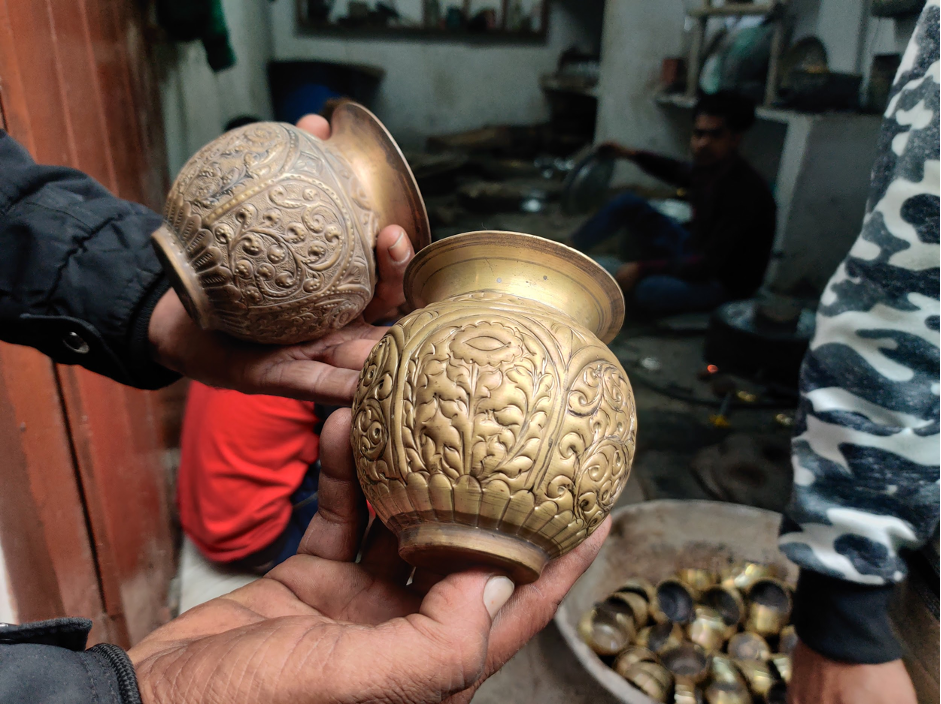 The stages include melting the silli (brass slab), pouring it onto the frames, beating it to give it shape, finely embroidering it, polishing and painting. 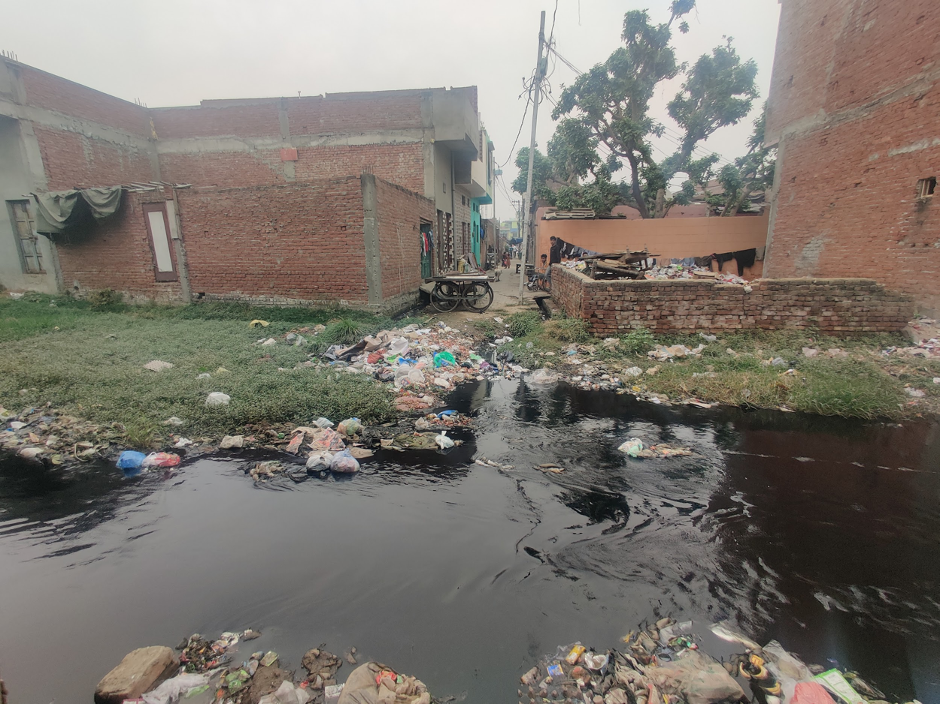 At least one lakh workers employed in the brass industry in Moradabad live in this Muslim ghetto.

For Ahmad, shaping and sculpting brass products in making was a skill he had learnt after almost a decade. This is the one of the most difficult stages as it requires precision and there is no margin for error, he says.

Pushed into the industry as a 10-year-old boy whose parents couldn’t afford to send him to school, his childhood memories are marred with unending practice of the craft. 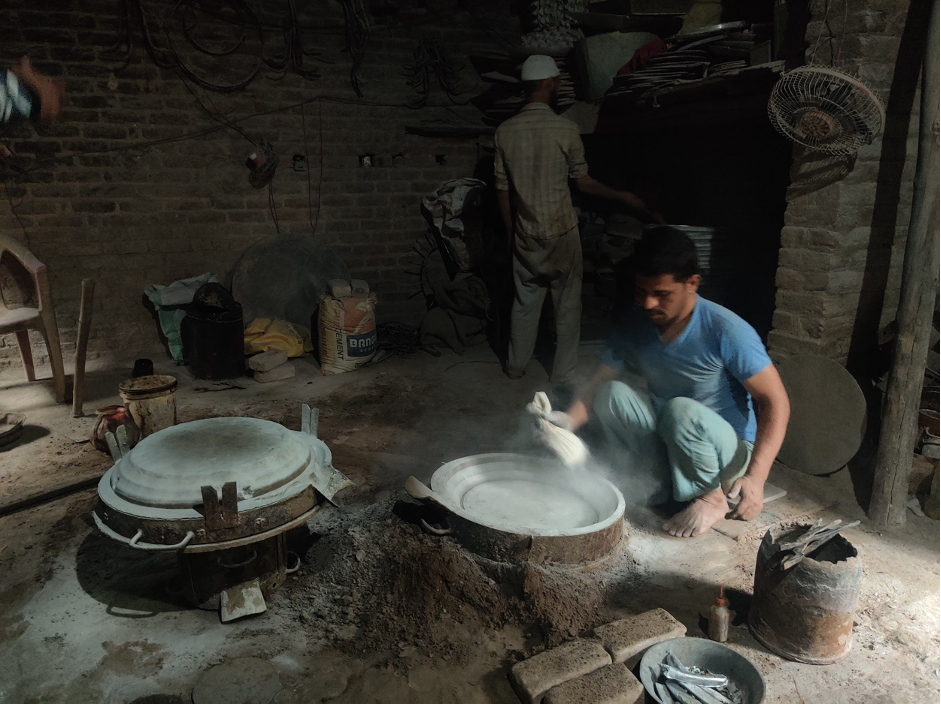 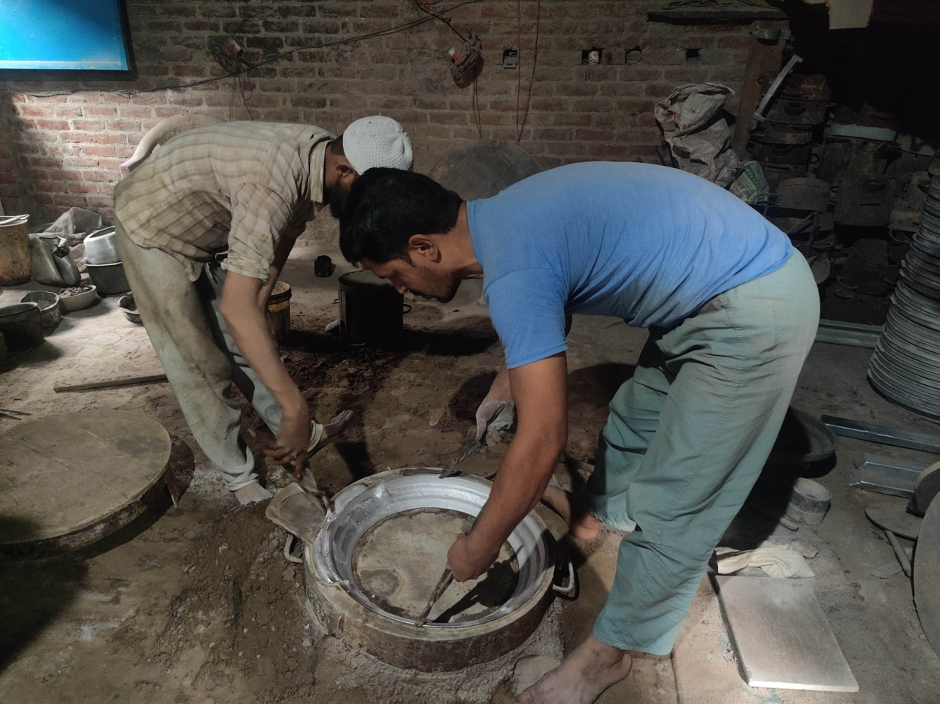 Being forced out of the industry due to lack of good working conditions and financial constraints, he mourns not being able to practice his skill.

Ahmad has three daughters and three sons. Two of his sons work in factories of the brass industry, but Ahmad decided against teaching them his craft.

“They are working there temporarily. As soon as they find a better job, they will leave. What’s the point of teaching them a skill that will send them into penury?” he asks.

Both the sons earn roughly up to Rs 8,000 every month from their two jobs. The youngest boy studies in class 1. Among his daughters, he has chosen to send Subhana, his 14-year-old daughter, to school.

“She is intelligent. There is not enough money to send them all to school. So we thought she should go. I anyway am very worried about marrying my daughters, where will I get money for their weddings?” he asks. The Wire also met with Subhana, who said that she wants to find a good job with her education and end the family’s poverty. She is currently in class 8.

Ahmad’s view of life changed during the COVID-19-induced lockdown, after which he took up plumbing. Due to the shutting down of work, he could not make any money for several months in 2020 when coronavirus hit for the first time.

The COVID-19 crisis mostly affected workers like Ahmad, who got paid their wages on a daily basis, mostly in the informal economy.

He could hardly manage meals for his family of eight people, and had almost been thrown out of his rented room for non-payment of rent. His roughly 350-square-foot room accommodates all eight family members. 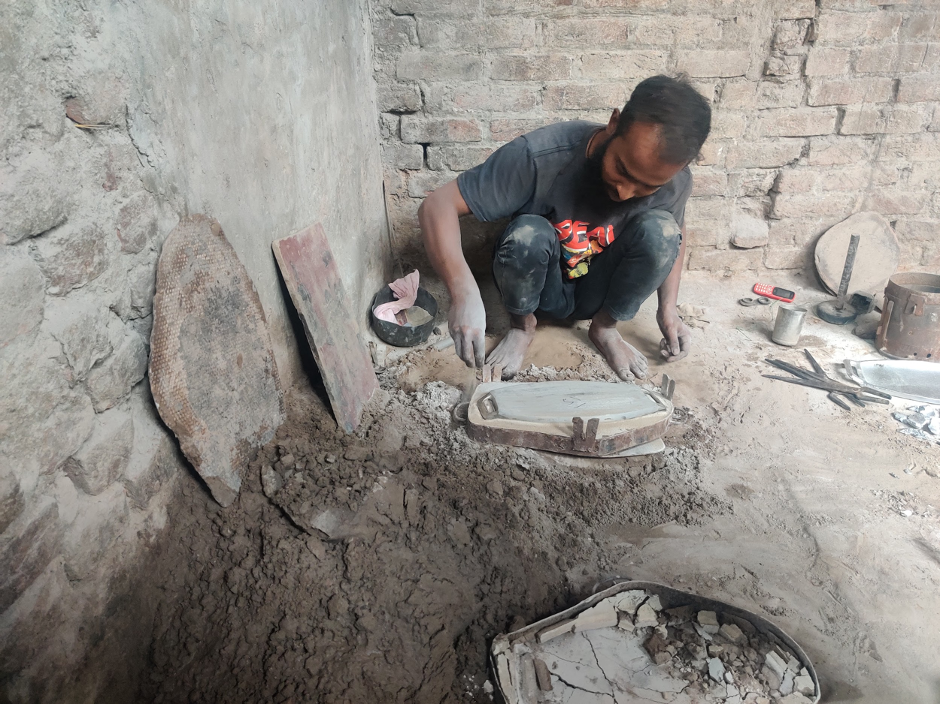 All his savings dried up, and he had to ask his neighbours for multiple loans. Almost a year and a half later, he has still not managed to make enough money to repay his debt of Rs 30,000 acquired during the lockdown. He still feels the aftershocks.

“We even had to sell the brass utensils at home for survival. Circumstances forced me and brass apart,” he says. 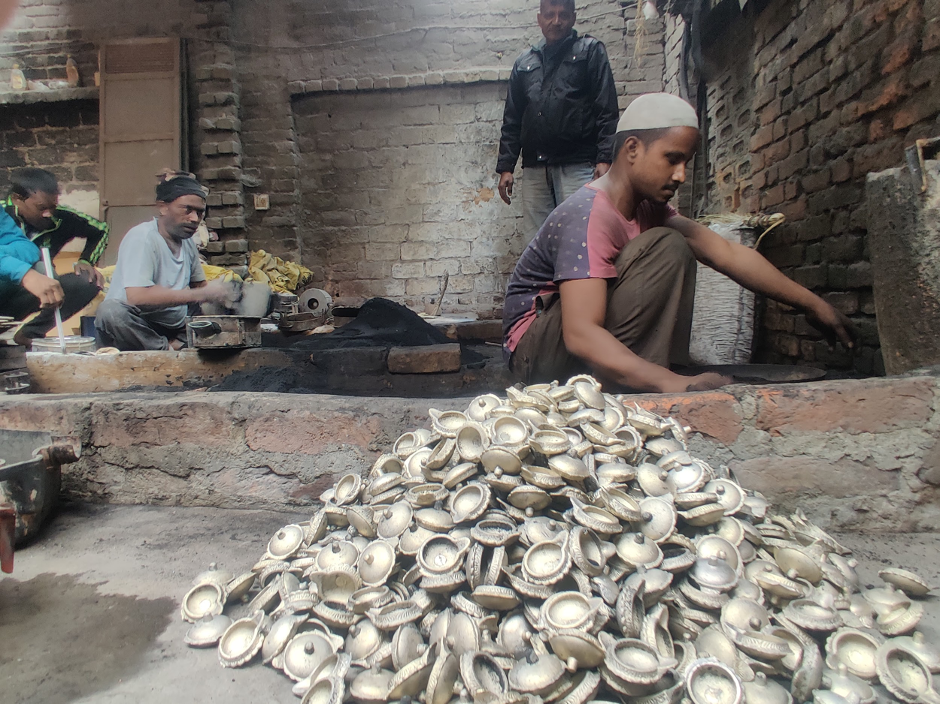 Ahmad now makes about Rs 5,000 from plumbing in a productive month. In the brass industry, he recalls, he used to make at least Rs 12,000 some years ago. His income was reduced to less than half when he decided to leave.

He is not the only one who has left the industry. Many of his friends too have left, for the same reasons – lack of money, no incentives like fee concessions in travel and children’s education, hazardous working conditions and too little compensation. 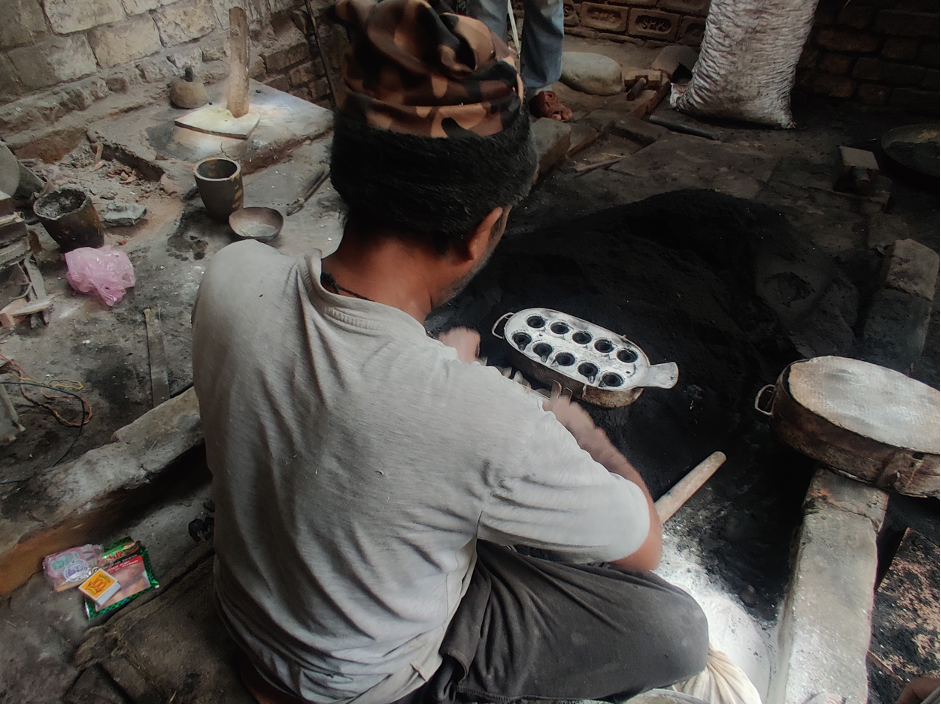 But not all of them have left their skills behind. Some workers, over a period of time, have shifted from the brass industry to the aluminium industry because it seems to be more lucrative. Arshad, a 32-year-old worker, told The Wire, “The raw material in the brass industry such as coal was too expensive. Here we at least get paid more as the production costs are lower.”

He says it was important for him to shift to another industry where his skills would be compensated better, as he has a three-year-old daughter who he wishes to formally educate. Arshad realised that he must shift early on in his career as a craftsman. His work involves working under immense heat, in dim light and risky conditions for long hours but he is satisfied as he believes he is being compensated well. He earns Rs 600 per day. “Hum mazdoor hain. Hum kya hi batayein (We are just labourers. What can we tell you),” he says with a sense of betrayal of someone who has never been recognised as a skilled worker.

The responsibility to preserve the brass industry, its art and craft is with the government.

Mohammad Abid, a resident of Islam Nagar and a supplier as well as manufacturer of brass products, says that the government has not been able to help the workers come out of the aftermath of COVID-19.

“We have suffered huge losses since COVID-19 struck. The government will have to ramp up its efforts for the revival for this industry,” he says.

Referring to the government programme under which artisans are supported to sell their products online, ODOP, he said that only big exporters are taking advantage of the programme due to a lack of understanding of technology.

He says, “The work of the artisans should be recognised and they should be provided with artisan cards. Small-scale workers should be encouraged to get stall spaces at exhibitions.”

There is a fear that the brass industry will slowly fade into oblivion, he adds, if workers are not given the right facilities such as concessions in railways, buses and for their kids’ education.

“The government benefits from its skilled workers and craftsmen. They are the pride of the country. Why is the government not protecting them?” he asks. 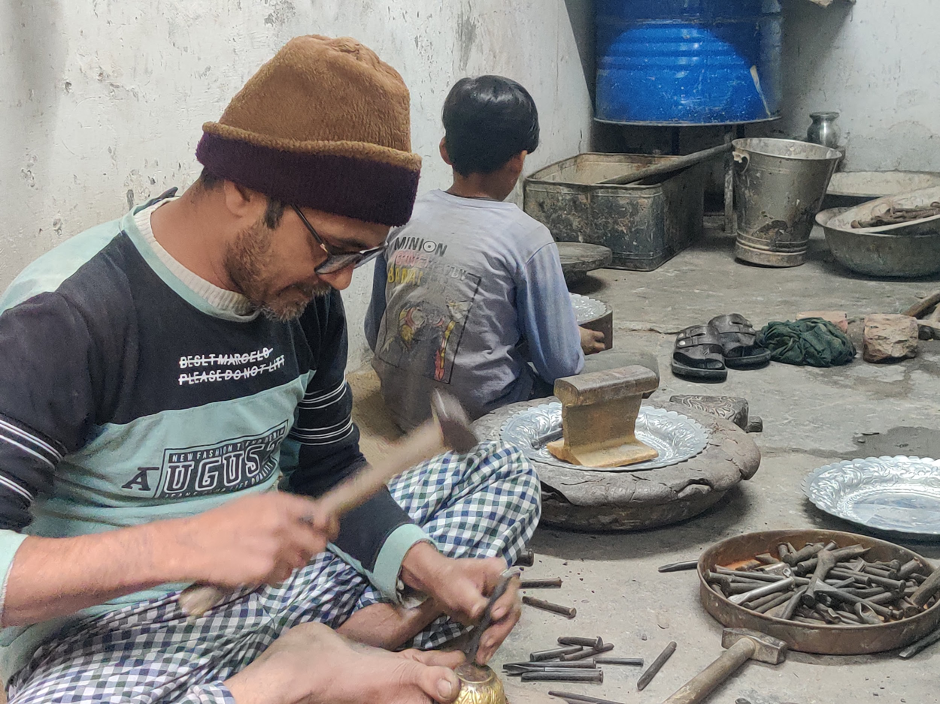 Abid himself has three small children, and COVID-19-induced lockdown dried up all his savings. He had to withdraw his 14-year-old son and eight-year-old daughter from school during the lockdown due to lack of money to pay their fees, he says. His five-year-old daughter is also now ready to start with school.

With a two-room house and a cramped space before the house gate which he uses as his office, he is among the well to do in Islam Nagar.

Since then, Abid, along with his wife, has started a small school within his own house for children who were forced to leave school during the COVID-19 crisis. The free school is facilitated by three teachers and is attended by 60 students.

Pointing to the importance of community during times of crisis, he said that it is only because of each other’s help that workers could manage to sustain themselves in the past two years. Abid is also associated with Aam Aadmi Party’s Uttar Pradesh wing.

According to workers, brass work had gotten better in the few years before the lockdown. But since the lockdown was imposed, the condition of workers became akin to the conditions after the 1980 communal riots in Moradabad, which resulted in the deaths of more than 500 people.

Shahnawaz Naqvi, a local reporter, said that several dead bodies were recovered from drains and sewers after the riots. For almost a year, work was non-existent. All export orders were closed, curfew imposed for several months.

“Low level workers suffered the most. Due to lack of space, the prepared material could not be stored and went to waste. Even many months after the riots, there was a lack of raw material which affected the industry severely,” he tells The Wire.

He added that over the next two decades, due to community efforts, work prospered again.

Naqvi says that in the 2000s, the craze for brass products saw a hike and the business rose again.

“There was innovation in products…but then over the years, the threat of plastic and fibre replacing brass came in. Brass was suddenly more expensive,” he says.

That, and the current situation forcing workers back to a state of penury, has pushed them to explore other options such as aluminium and copper.

Most exports of brass products take place between August and December due to festivals such as Christmas and Thanksgiving. Diwali in India around the same time also results in huge sales within the country.

“Iss baar toh lekin hum sadko pe aa gaye (This time, we are on the verge of bankruptcy)…” says Ahmad.

All photos by Ismat Ara.