If the Bengal Govt Is Serious About Electric Transport, Why Is it Killing Kolkata Trams?

Kolkata trams are not only known for their heritage value but form a part of green transport options. However, they have been facing neglect under successive governments.

Kolkata: The discourse against tramways in Kolkata has been on since the early 1990s, when the Left Front government was in power. Speaking at a public meeting in 1992, the then transport minister Shyamal Chakraborty had said, “Trams are obsolete. They will die a natural death.”

For its part, the incumbent Trinamool Congress (TMC) government has done nothing to improve tramways, but followed its predecessors in expediting the process of shutting them down completely.

Kolkata’s trams are the first in Asia and are currently the only ones operating in the continent. Starting in 1880 with the establishment of the Calcutta Tramways Company (CTC), trams in the city over the years, under successive governments, have been neglected. 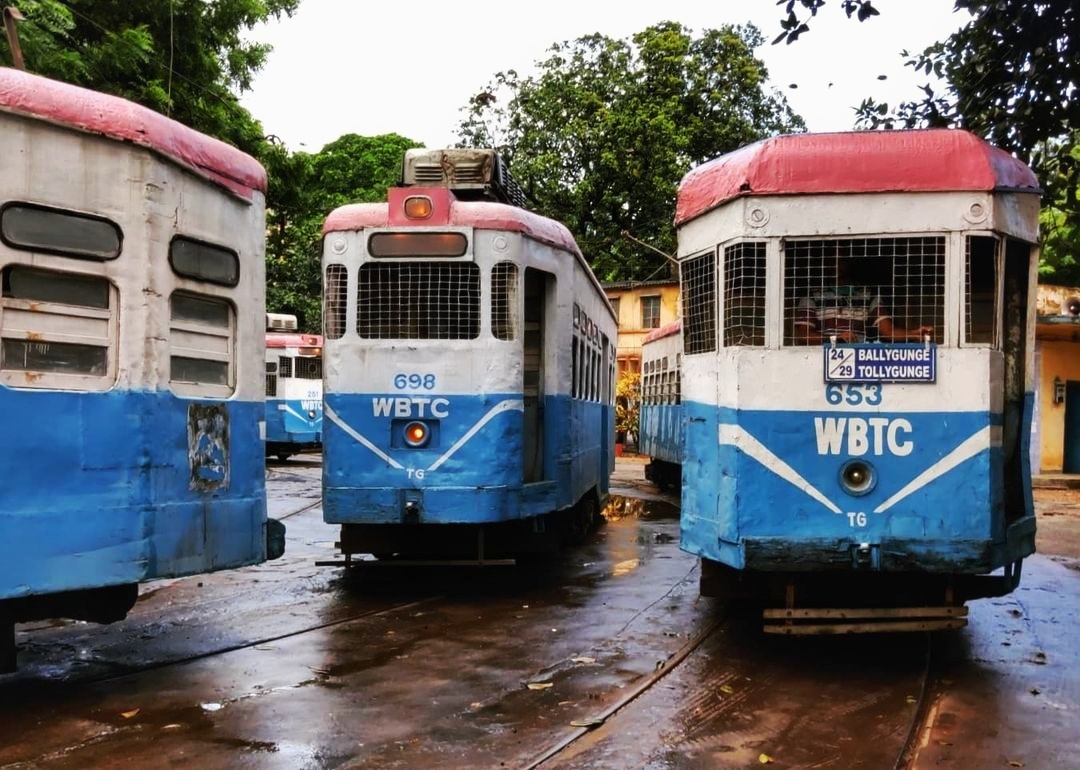 CTC doesn’t exist any longer, as it has been brought under the umbrella organisation called West Bengal Transport Corporation (WBTC). The official website of WBTC says, “Environment-friendly transport solutions would not have been so enjoyable as through ‘Trams’ in the streets of Kolkata, which has become the identity of the city of Kolkata.”

However, governments over the years haven’t taken any initiatives to keep the ‘identity’ of the city alive with concrete plans, barring a few cosmetic attempts. Authorities concerned have systematically made the 140-year-old city tram network inefficient, pushing it to irrelevance in one of the world’s most populous metropolises.

Trams in Kolkata are not just known for their heritage and iconic value, but they also constitute an emission-free public transport system that runs with overhead electric lines. At a time when global warming and climate change have become talking points around the globe, and Kolkata along with its bordering districts facing untimely torrential rains and waterlogging, one wonders why the state government wants to do away with one tram route after another.

In 2019, Kolkata won the C40 award for green mobility in Copenhagen for its public transport electrification efforts made by the city administration. The award was received by Kolkata mayor and senior Bengal minister Firhad Hakim who, at that time, had said that trams would play an “important role” in Kolkata’s efforts to completely shift to electric transportation by 2030, according to Times of India.

“Already, 10 single-bogey AC tram cars have been built indigenously. Many more are being built. We are in touch with the research institutes on how to run a tram without any conflict with the city’s mobility pattern. The moment the Metro work, which has disrupted the tram network of the city, is over, the full network of trams will be resumed to service,” the daily had reported, quoting an official of the transport department.

However, until this day, nothing has been done to revive the existing tram network. On the contrary, more tram routes have been closed by citing various reasons.

In June this year, the power department of the West Bengal government came up with an Electric Vehicle Policy 2021 which surprisingly does not mention the word ‘tram’ even once in the eight-page document.

Speaking to The Wire, Professor Arkopal Kishore Goswami, who heads the Multimodal Urban Sustainable Transportation research group at IIT Kharagpur, said, “Trams or newly developed LRT [light rail transit] should be an integral part of urban mobility. Kolkata’s existing tram network should be used or upgraded in an efficient way for future urban mobility. Trams/LRTs are sustainable, emission-free, cheap and effective means of mass transportation and the government should encourage them. With growing concerns around climate change and global warming, effective and modern public transportation is the way forward. Trams should complement other sustainable modes of transport, including electric buses.”

On Kolkata’s tram network, he specifically said that in a few places, shifting of tracks could be needed to follow a more linear/segregated network, adding that like the bus rapid transit system (BRTS), small, low-height stoppage platforms should be created for trams.

Goswami further said that effective enforcement was needed to ensure that cars, buses and other vehicles should not hinder the movement of trams.

Currently, a fleet of 20 to 23 trams is plying in only three routes in Kolkata. 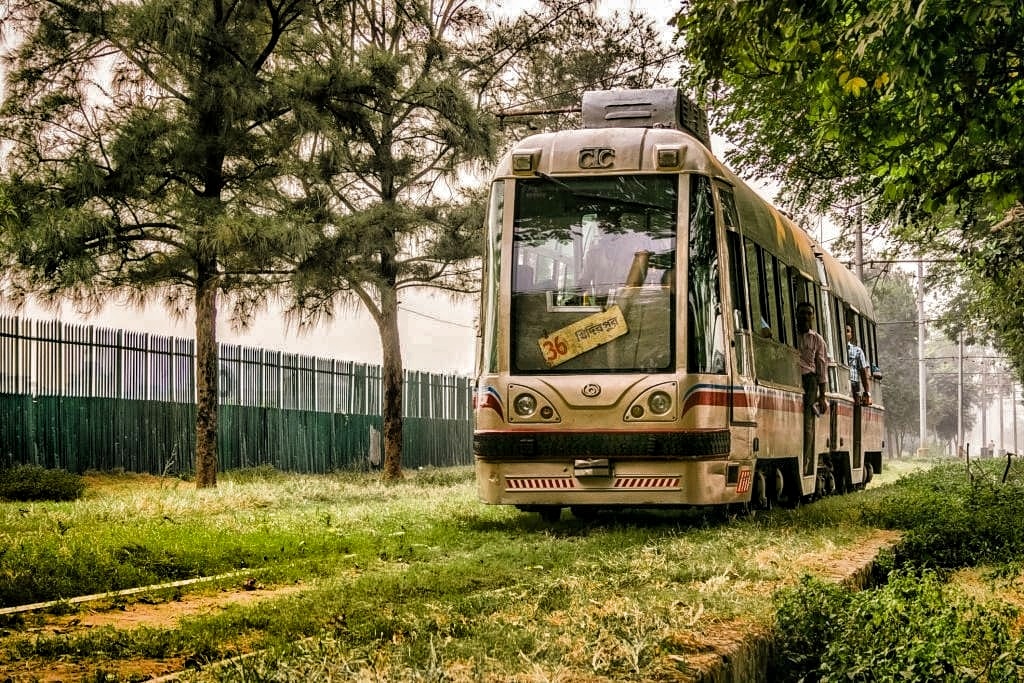 The only newly built wagon manufactured by BEBBCO in 2008. It has been parked at a depot for several years now. Photo: Calcutta Tram Users Association.

But concerns emerged a few weeks back when Kolkata Police had urged the state government to permanently do away with all 24 tram routes by removing tracks to avoid road accidents.

A senior TMC leader and a councilor of the Kolkata Corporation told The Wire, “Trams are outdated. Over the years, routes developed for autos have replaced trams, which serve people in a faster way. They have also brought in employment opportunities.”

Lobbies representing the interests of drivers plying cars, buses and autos have also played an important role in contributing to the neglect faced by the tram system in the city.

In 1984, with the introduction of the metro, the most important Chowringhee tram line was closed. With private buses hitting roads in Kolkata from 1992, passengers for tramways have dropped drastically. The situation has further worsened after the early 2000s when autoroutes were developed, taking away a bulk of passengers from trams. The most significant aspect that contributed to the neglect of trams has been that tram routes were decommissioned to make way for buses and autos.

On lobbying, Goswami said, “Across the world, petrol-diesel vehicle manufacturers have kept on lobbying to encourage personal/private vehicle use, leading firstly to the decline of the electric streetcars, and lately, the slow growth of passenger EVs. Climate change concerns, however, are now forcing governments across the world to rework their vehicular policies. But one thing that every government must understand is that public transport is the first priority, then personal electric vehicles, not other way round.”

A senior IAS officer working with the West Bengal government said, “The government believes tramways have lost relevance in today’s transportation system because of narrow roads, increasing vehicular pressure. The government is emphasising on adding more electric buses. But the government acknowledges the heritage value and legacy of trams in Kolkata. So, probably a single dedicated tram route will be identified and improved where tramcars will ply, primarily to preserve the heritage value and to promote tourism.”

The Wire reached out to Rajanvir Singh Kapur, managing director of WBTC for a comment. However, there has been no response. The article will be updated when Kapur responds.

Tathagata Neogi, who runs a curated travel company, said, “I think the tram system in Kolkata, apart from its history, is also probably the fastest and most affordable and green way of travelling across the city. Or, at least it was before. But a lot of tram lines have been shut down. Along with the metro system, we need to invest in modernising the tram system and make it more user friendly, and restore the network and expand on it.”

Speaking on the tourism aspect of the Kolkata tramways, Neogi said, “Tram connections can be leveraged for the promotion of tourism because they were historically laid out in a way that it connected all major public and administrative districts, which have major tourist attractions and experiences within walking distances.”

Note: This is the first of a two-part article series on Kolkata trams. The next article will take a deep dive into their present conditions and how they have been ignored over the years.