Given that women are the primary ‘users, providers, and managers’ of water and sanitation facilities, their participation in such programmes is necessary.

Women fetch water from an opening made by residents at a dried-up lake in Chennai, India, June 11, 2019. Photo: Reuters/P. Ravikumar/File Photo

Worldwide women are primarily responsible for ‘care work’ which includes fetching water, cooking, cleaning, washing, and taking care of children, elderly or ill. This gendered division of labour typically purports that women and girls shoulder a series of roles in the ‘private sphere’ that, for the most part, men do not share.

These socially allocated roles are effort-heavy but ‘invisible’, ‘unrecognised’ and ‘unpaid’. While performing these traditional social roles, women make sizeable contributions to the family economy, which is unaccounted for both within the family and as a part of our national accounts. The unpaid labour is often observed to be higher in developing countries where women compensate for the absence of or inadequate public infrastructure and services including water and sanitation services. This traditional gender role places a double burden on women and adolescent girls.

In the last five years, while there has been thrust on the creation of sanitation infrastructure, it has led to a simultaneous increase in the burden on women for Water and Sanitation (WATSAN) related activities.

A study by the Centre for Policy Research in collaboration with Kalinga Institute of Rural Management, KIIT Bhubaneswar on Gender and urban sanitation in ten slums in Bhubaneswar revealed that women are disproportionately burdened by ‘care work’.

Study findings also reveal that more than half of those who reported difficulty in accessing IHHL, also reported that IHHL has increased the burden of fetching water. Nearly three-fourth respondents disclosed that women and girls were responsible for fetching water. They spend close to one to two hours daily securing water for the entire household. 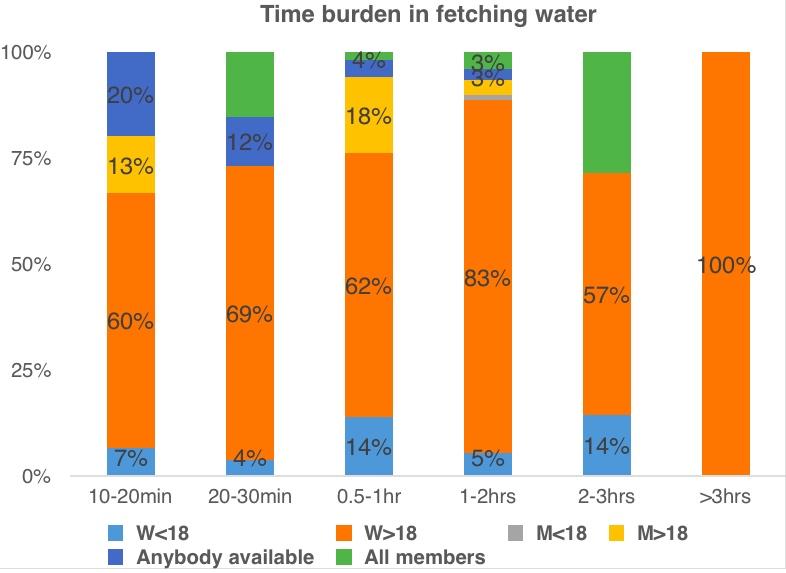 In Kedarpalli basti, also known as the ‘sweeper’s colony’, water access and conflict are critical concerns. While piped water connections were provided by the government nearly a year ago but, these taps have since run dry. Residents largely rely on common water connection points to collect water for household use. Inadequate supply, access and availability of water creates an insecurity amongst slum residents. It often leads to water conflicts in Kedarpalli slum. Residents revealed that the main inter-personal disturbance in the slum was based on water sharing. For instance, a woman respondent shared that:

“if I go and fill my buckets with water and the person after me in the queue does not get water, they would blame me. They would say – you will cook and eat today but, what about us?”

In fact, the burden of fetching water is a critical factor for sustained usage of IHHL and women carry this burden for the family and the community. Moreover, women perform ‘care functions’ including taking care of children and are also responsible for washing clothes at community toilets – they are often ridiculed by caretakers for taking more time, using too much water and dirtying the community toilets more than men.

Resultantly, at some community toilets they end up paying more for consuming more water. To ensure that the operation of CTs and PTs are sustainable, an adequate and equitable tariff structure should be built-in based on principles of equity and justice. The user charge can be differential and yet inclusive. It can be arrived at through a consultative process involving women, transgender, persons with disabilities, aged, and other urban poor and marginalised groups.

The evidence from the study strengthens the rationale for the construction of IHHL vis-à-vis community toilets (CT). Women have disclosed that during periods of heavy footfall, men enter women’s toilet wings. They have complained that male caretakers have been assigned to clean the facility, that community toilets have broken locks and doors and there is no provision for safe menstrual hygiene management (MHM).

For members of the transgender community, community toilets are sites of harassment and ‘unsafe zones’ and hence, they completely avoid them. In contrast, IHHL brings security and dignity to them. Transgender revealed that after the construction of IHHL, they feel safer in accessing toilets. There is no physical or psychological threat of harassment. Given that CTs are non-operational at night, the toilets remain inaccessible to the community for at least 10 hours a day, thereby undermining the SDG goal of providing sanitation for all at all times.

Despite the increasing role of women in maintaining and providing sanitation infrastructure facilities for household usage, the study reveals that women and members of the transgender community are under-represented in the decision-making process (of planning and implementation) related to location and design of sanitation infrastructure at boththe household and community level. At the household level, while most of the ‘care wok’ is predominantly undertaken by women, their role when it comes to decision making surrounding sanitation is negligible.

Given that women are the primary ‘users, providers, and managers’ of water and sanitation facilities, their participation in the water and sanitation programmes are often deemed as necessary to increase the efficiency of the project. Resultantly, often WATSAN is perceived to be a ‘feminine function’.

On the ground, women collectives are formed. For instance, study findings reveal that basti committees in slums are male-dominated addressing broader issues of slum development including housing and other infrastructures, often seen as ‘masculine functions’ while Mahila Arogya Samiti – a women’s collective is responsible for WASH which is perceived to be a ‘feminine function’.

Also read: Budget 2020 Sets India on the Path to Meet SDG Targets for Water and Sanitation

However, these collectives based on a gendered division of ‘care roles’, rarely translates into improving women’s participation and ability to influence decisions, both at the household and community level. Their participation is usually either tokenistic or passive and rarely ever interactive or substantive. Moreover, it contributes to creating socio-cultural realities that perpetuate gender stereotypes.

Unless men’s collectives are also promoted to work on issues of water and sanitation, it is likely that the burden on women will continue to remain high. Hence, there is a need to bring about change in the structure of these forums to ensure gender-transformative outcomes both at the community and household level.

For ensuring gender transformation, it is vital to first recognise the gender-based complexities and vulnerabilities women and girls face and to develop gender-responsive strategies so that men’s and women’s group no longer work in silos. There is a need to find synergies and make concerted efforts to engage more with men and boys in WATSAN community forums. To achieve sanitation outcomes enshrined in the SDGs by 2030, it is necessary to interlink SDG 5 (Gender Equality), with SDG 6 (Water and Sanitation) and, SDG 10 (Reduced Inequalities).

Tripti Singh and Anju Dwivedi work with the Centre for Policy Research.